It goes without saying, insult a Professional Hunters hunting dog and your life will be in danger – watch a Professional Hunter work with a young dog for the first time – and you’ll be rewarded for life.
Recently I had the great pleasure of guiding two elderly gentleman from Spain on their annual safari to Africa. Both being experienced hunters who’ve had the privilege of hunting throughout most of Southern Africa over the course of the last 30 years.
Manuel Revenga and his good friend Salvador Albacar, accompanying him, joined me on one of our classical Plains Game Safaris. We were after a host of species that Manuel had previously not hunted or had little or no success on.
Day 1 started off with the usual sighting and re checking of the rifles before starting on the hunt. By midmorning we had spotted a fantastic Warthog across a valley, but had no way in getting any closer without a long trek through a steep gorge. Judging by Manuel’s enthusiasm, we decided to set out and give it a crack. An hour later we were up and through the gorge, and in position.
Manuel steadied himself on the sticks, leaned into his 300win mag and squeezed. At the exact moment of the shot the Warthog stepped forward and Manuel hit him a bit far back. I signaled for my tracker, Boy, to send in my young inexperienced hunting dog, Bongo. A warthog, never the best trophy to start a dog on, but this was Day 1 and if this safari was to start on the right note, then he’d have to learn fast! 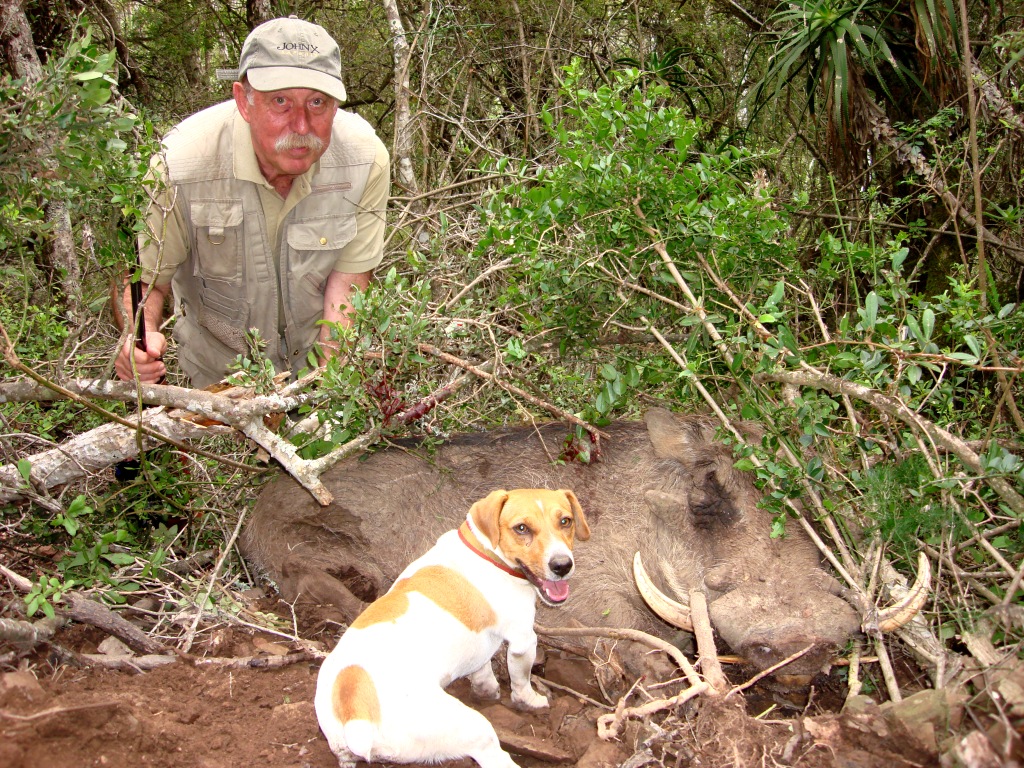 Manuel with his fantastic Warthog where it finally came to rest. Bongo with his first animal and still not willing to let it out of his sights. Not even for a photo!

Luckily for Bongo, we had our family Jack Russel, Toffee , join us for a few weeks while the rest of my family were visiting in Cape Town. Bongo and Toffee got stuck in right away and disappeared down the same gorge we had just crossed to get to the boar in the first place. The dogs battled to hold the scent and their lack of experience was counting against them. At one stage we could hear them baying the boar, then it would turn silent again and we’d continue on the blood. As all hope started fading, the dogs bayed the boar again. By the time we got to the dogs to finish the boar, we had crossed the gorge several times and all were feeling the humidity and the steep banks of the ravine. Although not perfect, a job done and one that taught my young dog, Bongo, a few valuable lessons. 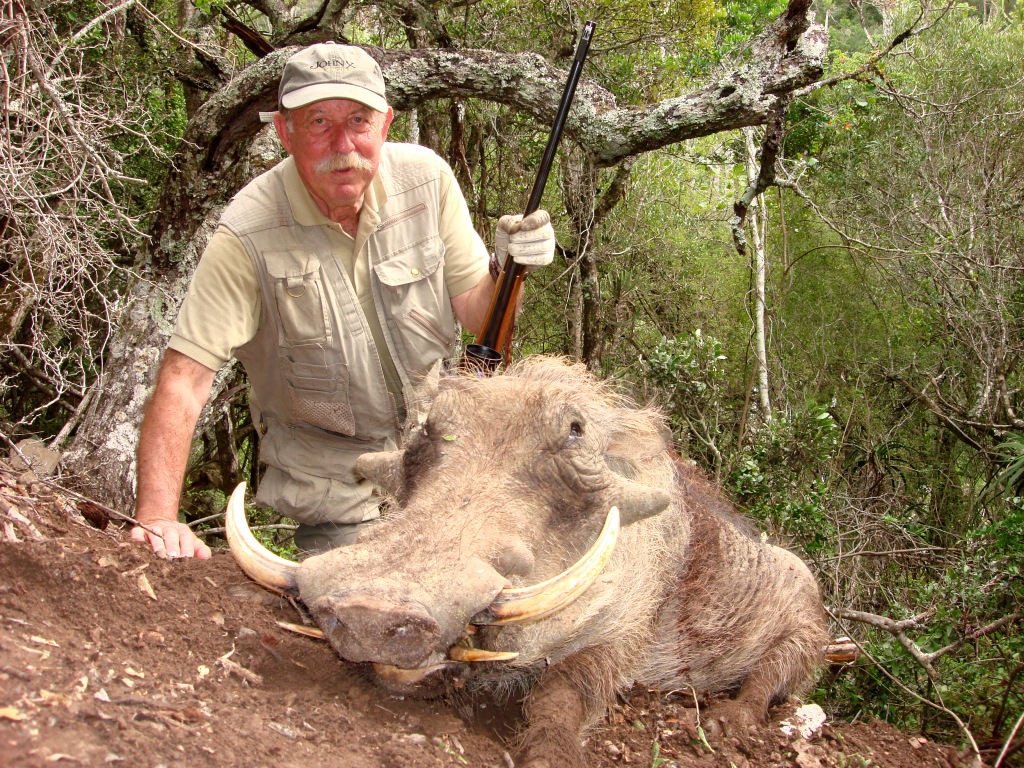 Manuel with his Warthog, finally untangled from the undergrowth. One gets a better appreciation of the quality of the boar in this picture. 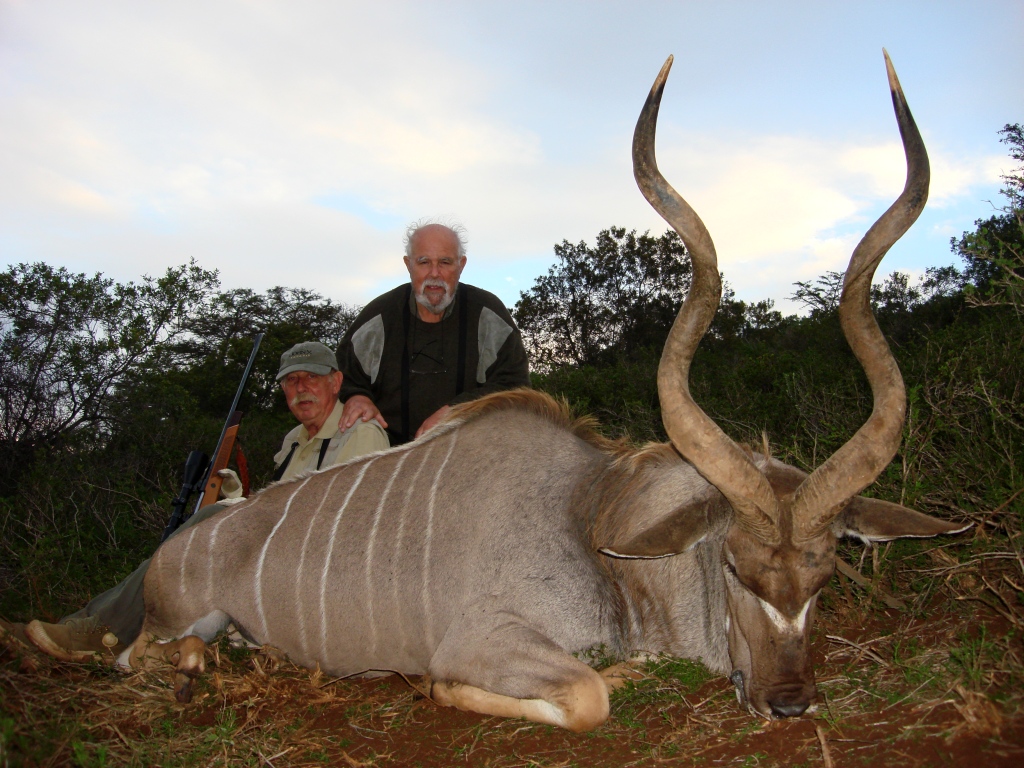 Manuel finished off Day 1 with a text-book shot on this magnificent Kudu Bull.

Day 2 saw us heading North towards our Eastern Mountainous area. We were after Cape Eland and Nyala. The terrain in this area is extremely rugged with big mountains and impressive roads built by hand. Manuel made a difficult shot on an old Eland Bull and after a followup the dogs bayed the already weakened Eland. Getting the bull down from the mountains was a job in itself and one that required 8 strong men. 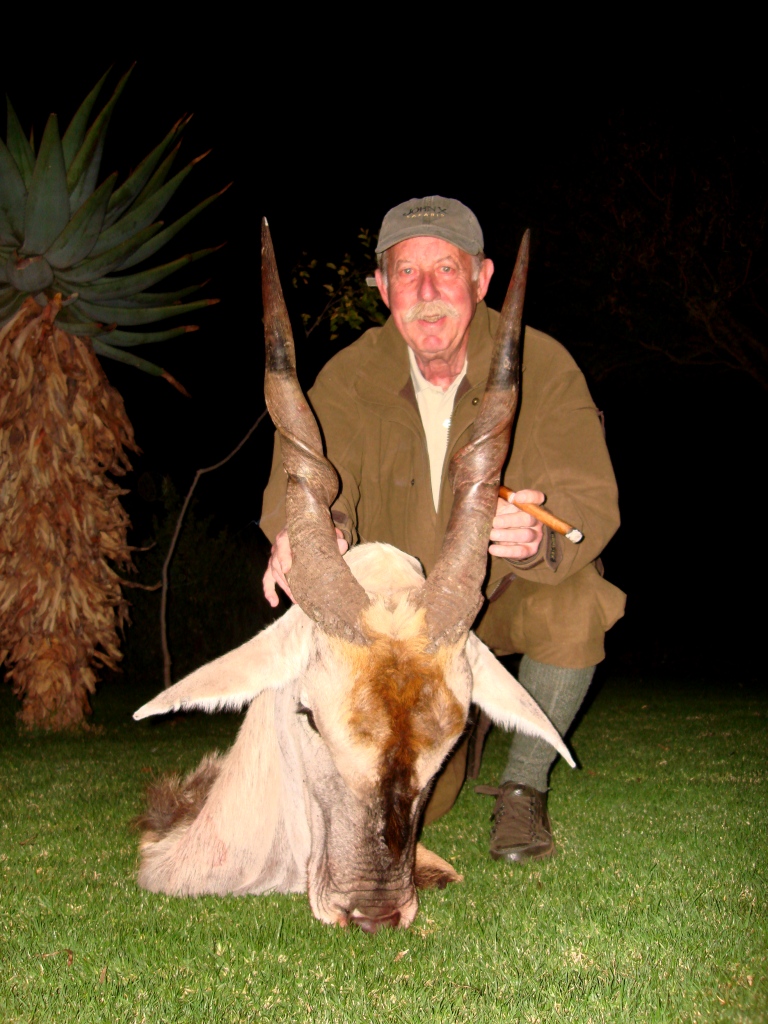 Taking pictures back at camp later that evening having skinned the Eland in the mountain.

Day 3 and 4 saw us fighting the elements with strong winds and cold weather. Nyala being shy animals and easily affected by cold, never showed themselves and we decided to head back South towards our Coastal Area.
Day 5 saw us finally get our Nyala, one that Manuel really had to work for. That afternoon we headed into one of our coastal concessions and tried for the ever elusive Cape Bushbuck. A few rams were spotted, but no luck on anything we felt worth our while pursuing. 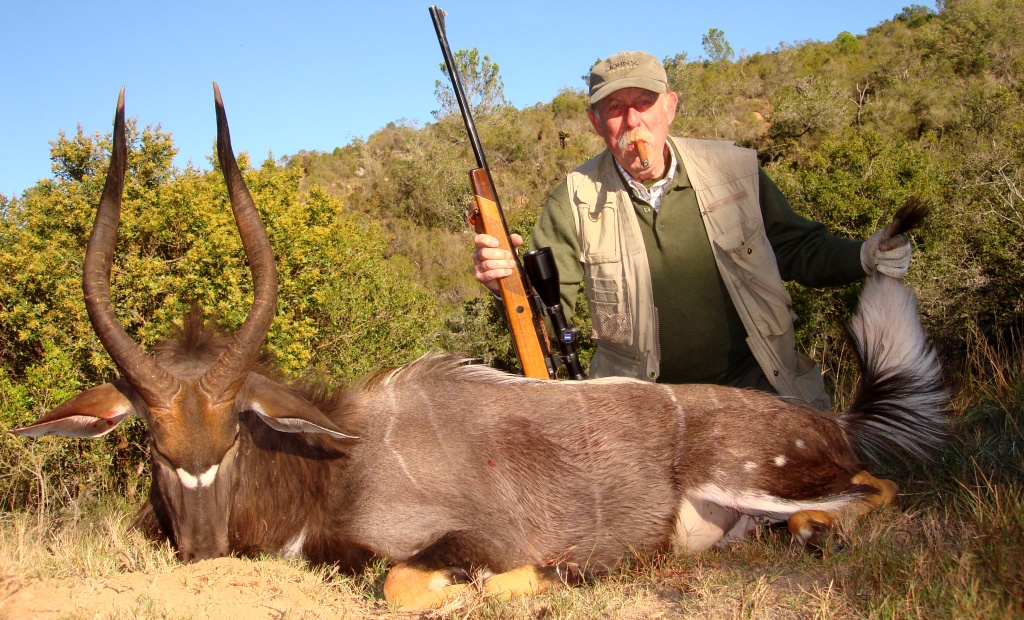 A relieved Manuel with his well-earned Nyala.

Day 6 – Our luck was bound to turn. We decided to return to the same area as the evening before, afterall we had seen a few Bushbuck only to be outdone by Waterbuck on numerous occasions. By midmorning we had , had two attempts on Bushbuck, neither working due to swirling winds. At midday a good Impala crossed our path and Manuel decided to take it.
At the crack of the shot, both Manuel and I lost sight of the ram as he disappeared down a wooded ravine. I immediately brought in, a by now very keen, Bongo. Bongo took off immediately leaving Toffee behind. Toffee unfortunately took the track in the wrong direction, heading back towards where we had taken the first shot at the Impala.
From that moment on, all who were present, saw the rise of a young hunting dog into something special. Bongo worked the track, only two drops of blood and a herd of Impala tracks kriss crossing the wounded rams track. He disappeared for minutes that felt like hour’s only to reappear more determined than ever. Suddenly there was that distinct bark, and then more faint barking moving down the ravine, further and further out of range.
Boy and I caught up to the commotion to find Bongo baying the wounded Impala in a wooded ravine, and a quick finishing shot at close quarters brought the hunt to an end. 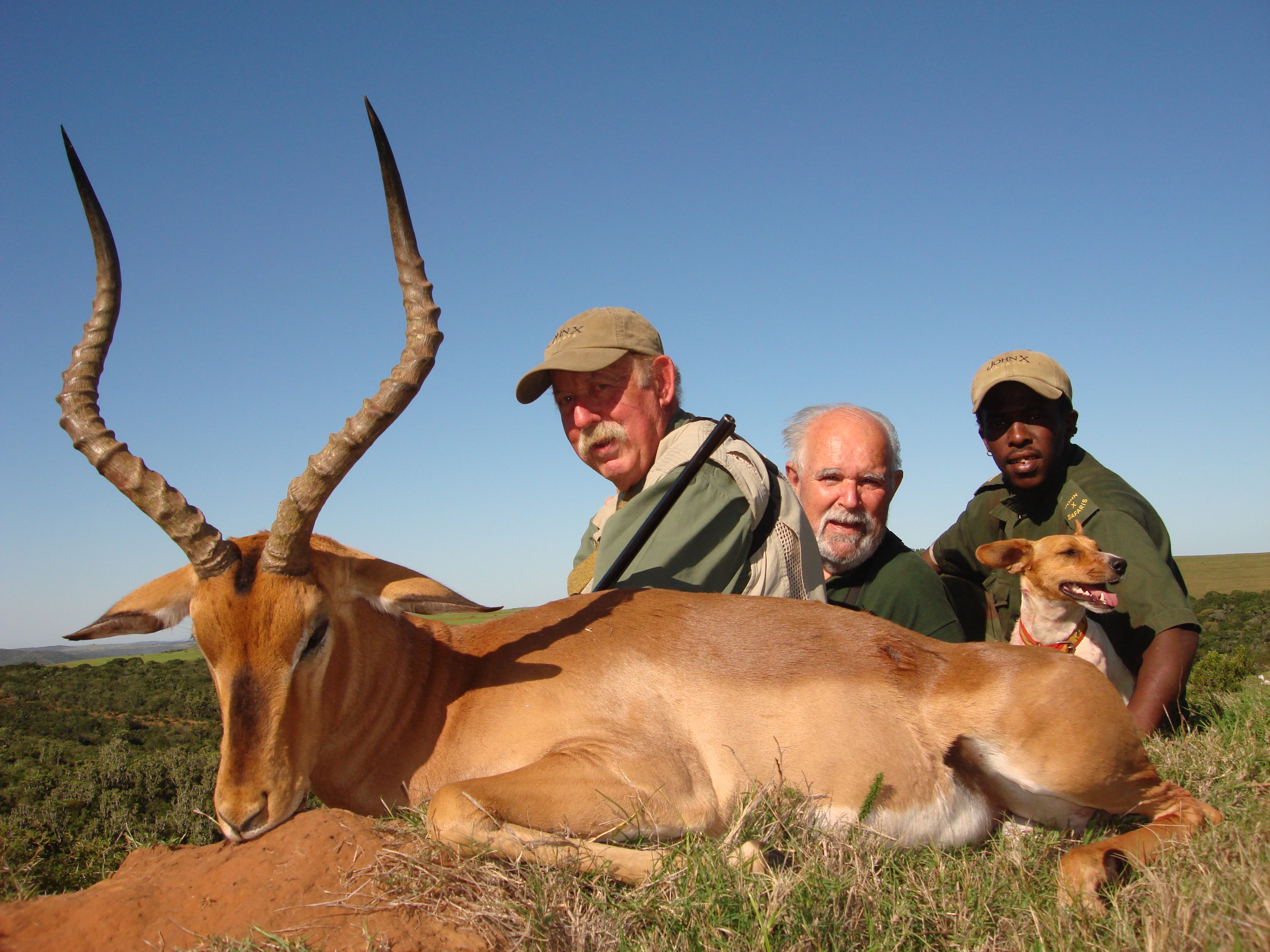 A happy team with an even prouder Bongo!

Day 7 saw us taking it easy and we had a last role of the dice at an old Waterbuck bull that had been deceiving us for many years. On the day he won again! 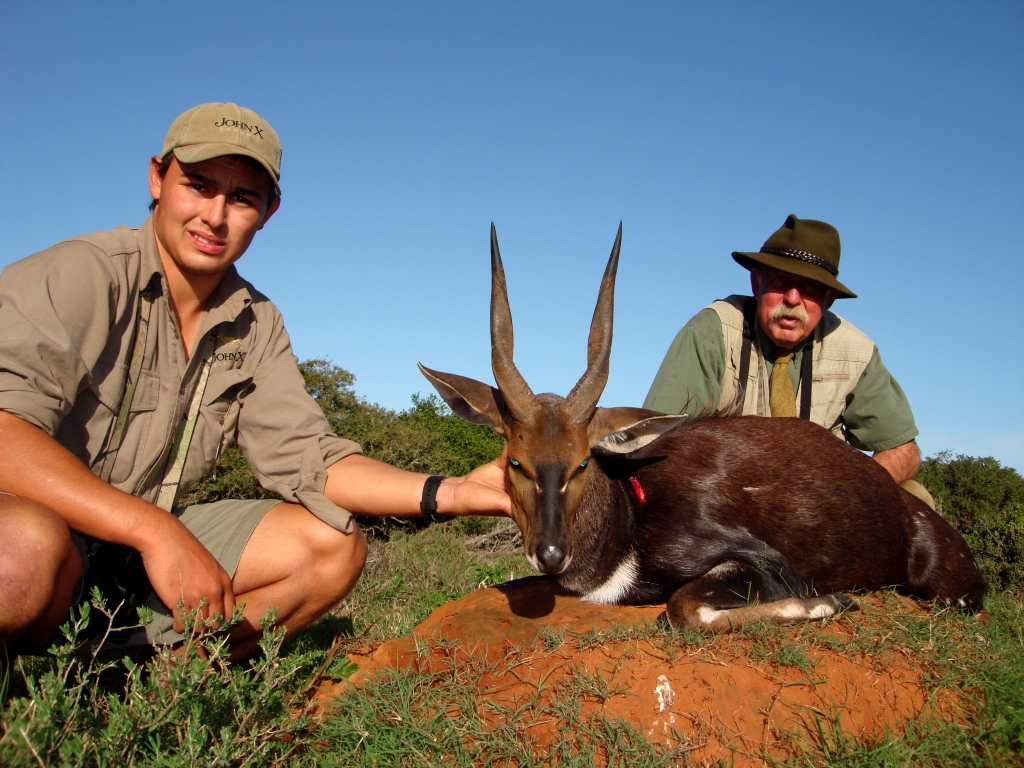 Well, we didn’t get beaten on all! Manuel got this great Cape Bushbuck to complete all 4 Spirals on 1 Safari. Jose joining him for the photo.

Never the less, we had met two fantastic gentleman and shared 7 magical days enjoying the great spirit of hunting. We had hunted some of the most beautiful terrain the East Cape has to offer and saw the rise of a young Jack Russel into something larger than life that I’m sure will be spoken about for many years to come!