I first met the Henrich’s in 2007 when they joined John X Safaris on one of our Classical Plains Game hunts in the Eastern Cape, South Africa. Brothers, Mike and Doug along with their father Vern enjoyed the hunting, and fell in love with Africa like so many before. 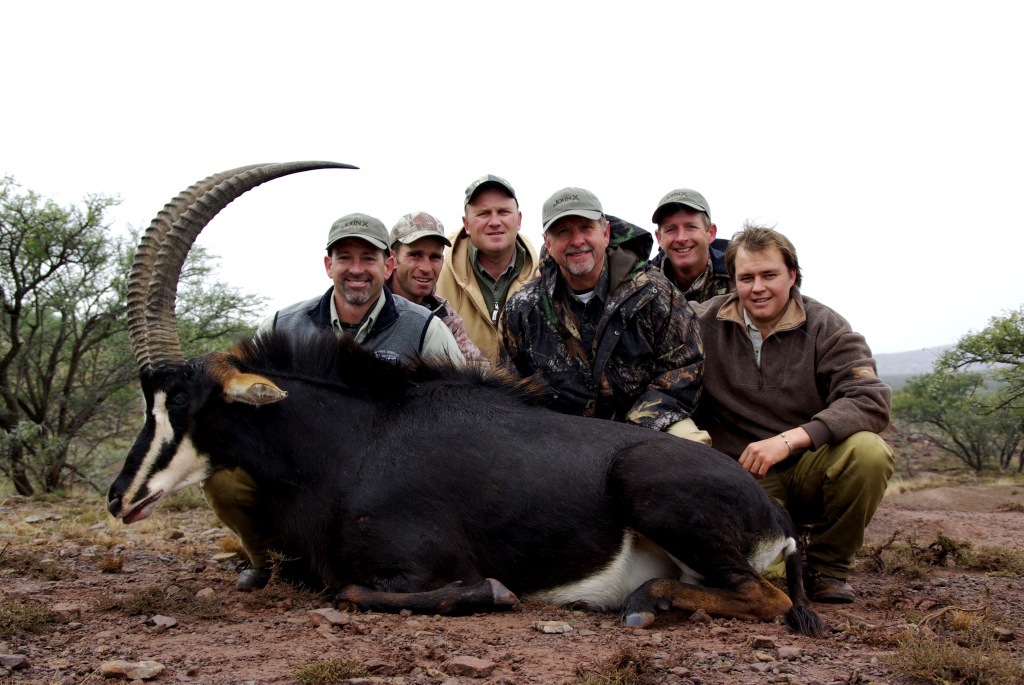 Doug, Mike, Vern and the team from their 2007 hunt with John X Safaris.

So when I received an email from Doug during 2009 informing me that he would be bringing along his wife Jill and son Ryne as a graduation gift, neither of us realized just how special a hunt it would turn out to be. Not in our wildest dreams did we think we could match some of those trophies from their first safari, let alone hunt two of the best John X Safaris trophies from the past decade.
Our game plan was simple. Both Doug and Ryne had their ideas of what they were after species wise, Jill was to be our photographer and we wanted to rotate between rifle and bow. Professional Hunters, Carl van Zyl and Ed Wilson would run the hunts with Jose. Boy and Tembakosi would take care of the tracking and skinning, and Bongo, the Jack Russel, would clean up any mishaps.
Apart from having fun and enjoying the hunt as a family, Doug and Ryne had put forward one request. Try and match Grandpa Vern’s Gemsbuck from that first hunt. Wow, I sunk back into my seat, this was going to take some doing, not to mention the luck that was required. Firstly, one has to be quite clear, Grandpa Vern hunted a 43” Gemsbuck female with bulls bases in 2007. His trophy was a freak of nature and certainly one we all considered a once in a lifetime. Never the less, this was hunting and with the knowledge of a new area I hadn’t explored, I thought lets give it a crack! 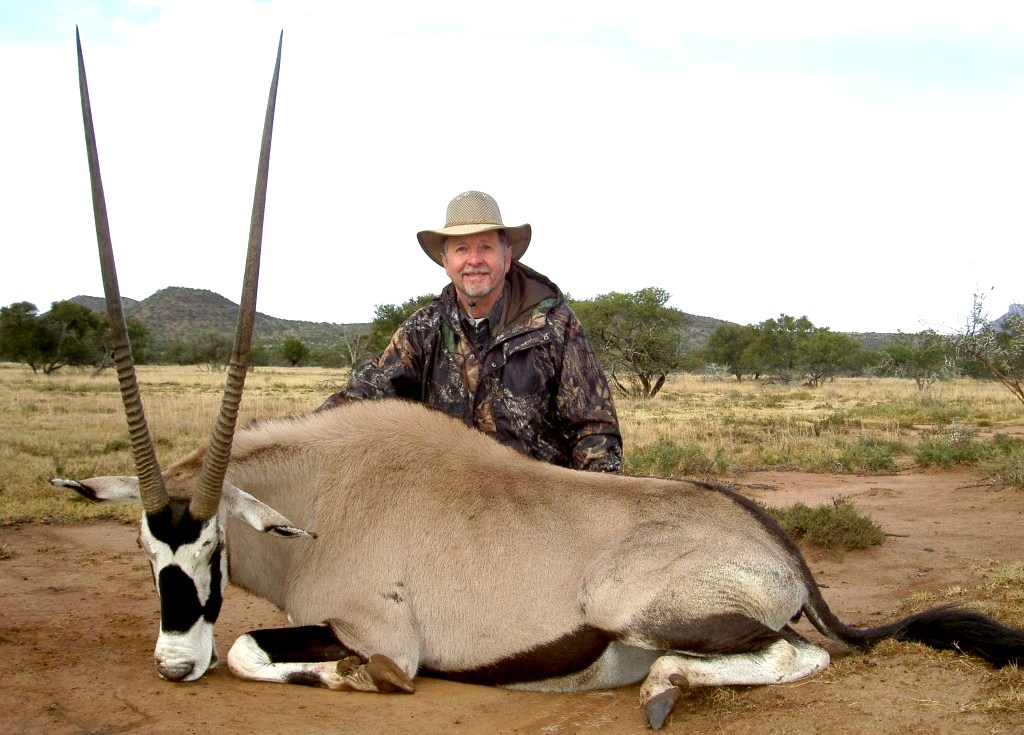 We decided to head to our Northern Camp the very first day. Bad weather would be hitting our Coastal area and effecting the  hunting for the first few days of our safari. Our Northern Camp sits on the higher ground making for colder conditions but always allowing the hunter some hunting opportunities if poor weather hit. 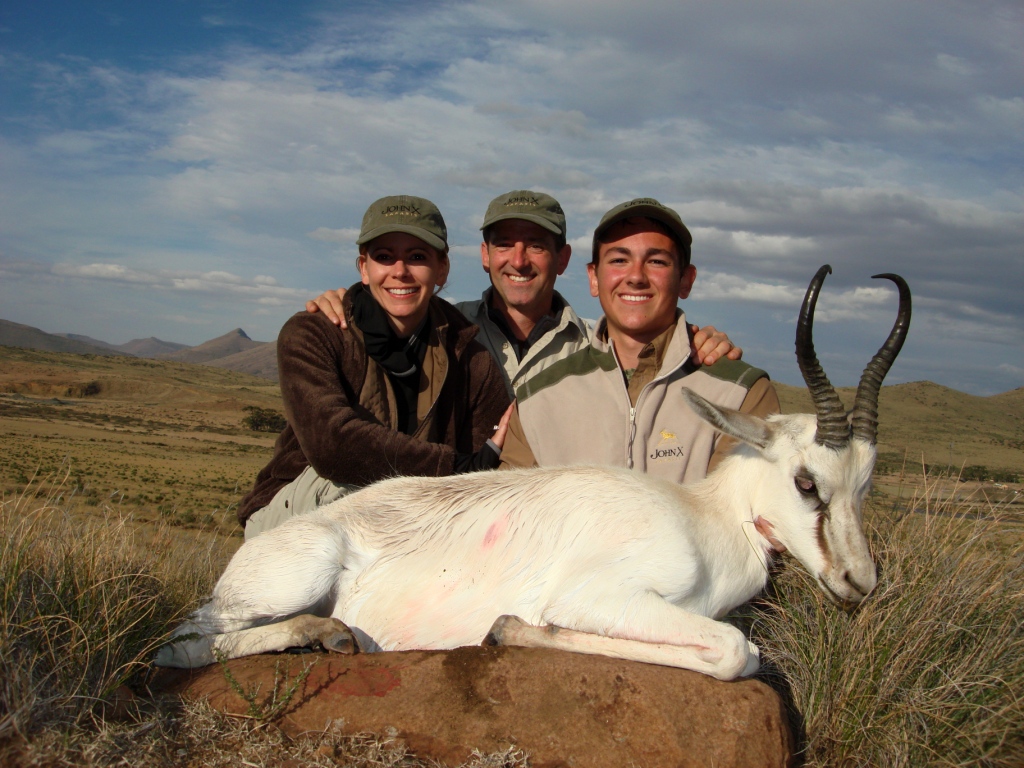 Ryne got us off to a flying start with this great White Springbuck on our first afternoon in the North.

The next morning we were up at dawn, getting ready to head into a new and unexplored hunting area. Good friend, Neil, accompanying us felt very positive about the area. No trophy hunting had taken place in the area before and from all reports in the local hunting community, there were some good Gemsbuck seen from time to time. 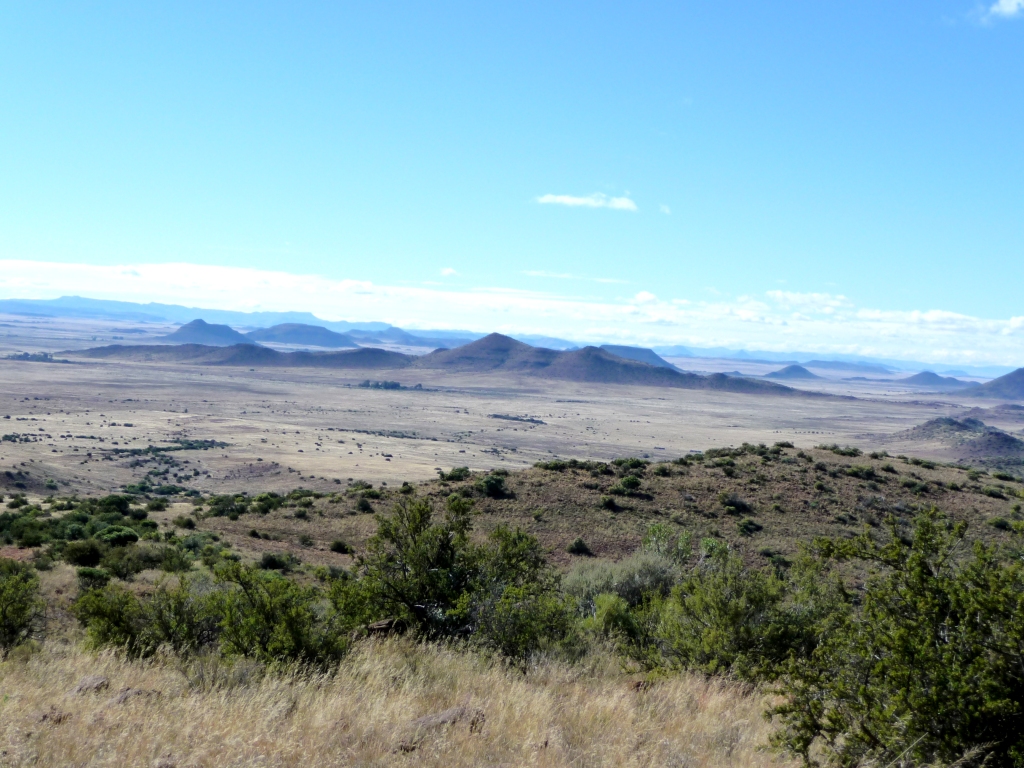 Typical scenery from our Northern Area, very deserted with mesas towering out over the plains of the Karoo. The Gemsbuck we were after called this area home.

The cold morning allowed for spotting game from far away, any quiet valley with a hint of sunlight boasted Gemsbuck, Kudu or Mountain Reedbuck. The question was; where to start? There were so many eyes and ears.
We decided on a group away from the main herd and got in closer to take a better look. I studied all the cows, six in total. One particularly long cow, but not very old and certainly one that needed to breed for many more years to come. Then off to the side a young bull and another with his head in a bush. A glimpse in the bush, it couldn’t be Neil and I assured ourselves, it was to high up to be a tip of a  horn. Both ignoring the bull in the bush, looking through the group again, and then out of no where – a monster bull. I assured both Ryne and Doug, that this Gemsbuck was not in the same length class as Grandpa Verns, but felt if it were me, I wouldn’t hesitate in taking him. That’s all Ryne needed, he crept down a few yards further, steadied himself and dropped his Gemsbuck bull at 350 yards. 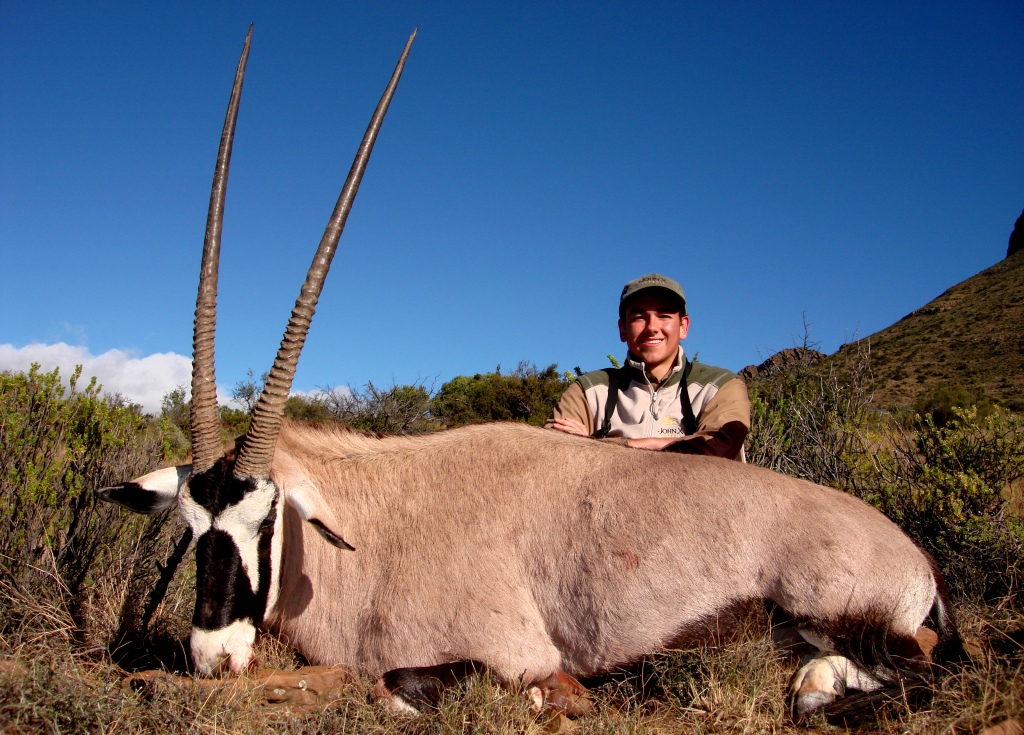 A understandably proud Ryne with his Gemsbuck Bull. This bull reached the magical 40” mark. What made it such a fantastic trophy, it not only had length like a cow but had bases like no bull before.

Doug, having sat back all morning watching his son enjoy the action got caught up in Gemsbuck fever all over again. He was keen to take a closer look at a Gemsbuck that Boy had spotted whilst we were stalking Ryne’s bull. Doug had hunted a bull before and was out to match Grandpa Vern.
We found the old Gemsbuck cow, exactly where Boy had last spotted it, by now part of a big herd. Neil and I studied the old cow, it was evident that this was to be her last winter. Always off to one side and trailing the herd whenever they were on the move. I knew it was a long cow, but exactly how long I couldn’t say for sure. Both Neil and I settled on 42” and told Doug the choice was his. The shot was another 350 +, but Id seen Doug shoot before, there was no doubt of his ability. 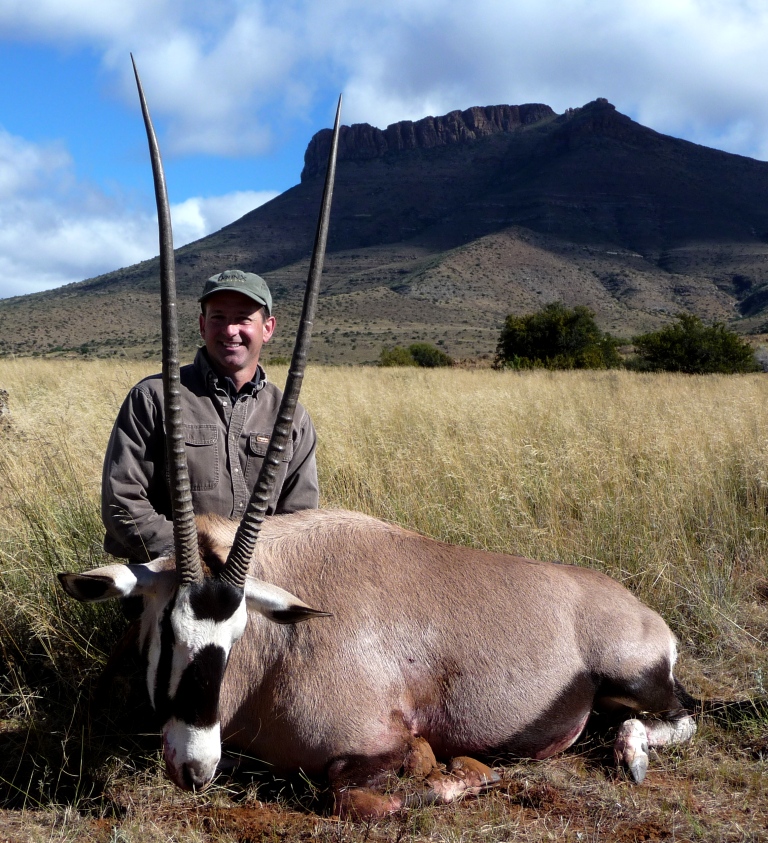 The Gemsbuck of a lifetime, this cow finally measured out at 43”. 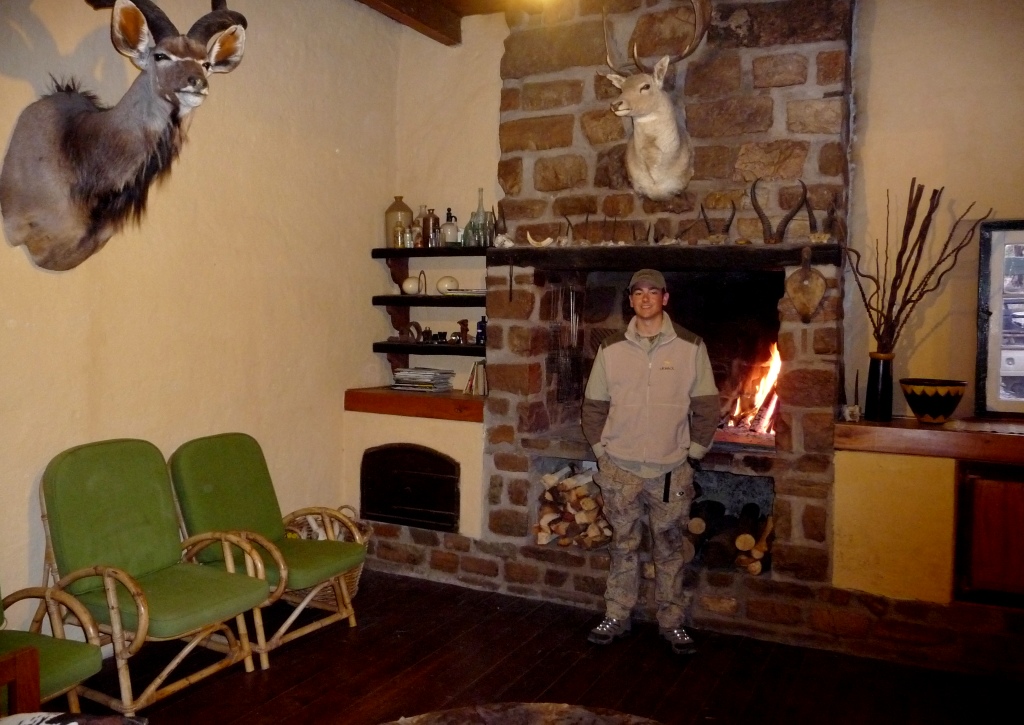 A day to remember! Capping it off around a warm camp fire desperate to get into contact with Grandpa Vern to share the great news on two world-class Gemsbuck.

Day 3 saw us on the quest for East Cape Kudu and Springbuck. Numerous Kudu bulls were spotted early on. One in particular was a fantastic bull. Having crossed two ravines and put two mountains behind us, we were finally in position. We crested the final ridge into a wooded valley where the bull was last spotted, nothing. He had disappeared like a ghost. We decided to give the Kudu hunting a break for the afternoon and concentrated on Springbuck.

Doug and Neil with a Black Springbuck, the 3rd of the 4 Springbuck varieties available.

Day 4 saw the party heading back south to meet up with Professional Hunter, Ed Wilson. An interesting afternoon was spent looking for Kudu and Warthog before heading back to Base Camp for a warm dinner. 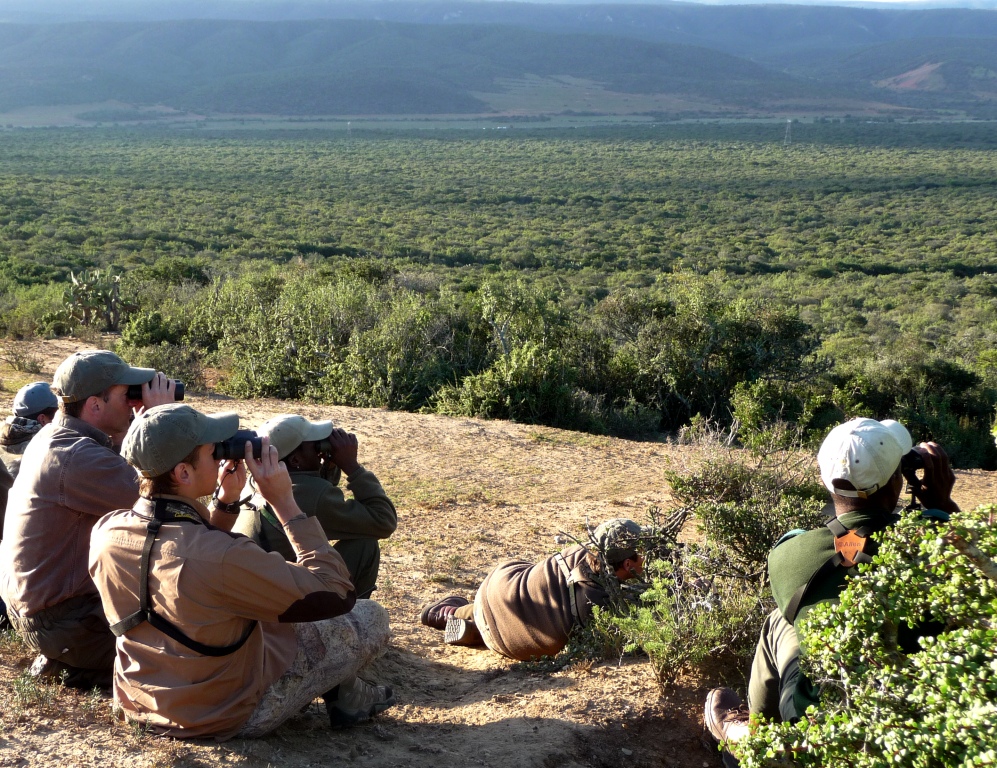 Spending the afternoon glassing for Kudu. When it comes to Kudu hunting, it’s a game of patience.

Day 5, up at dawn. Operation Kudu. Doug, Jill and I would concentrate on Kudu, Warthog and Bushbuck with the bow. Ryne and Ed would do the same, with the main emphasis on Kudu. 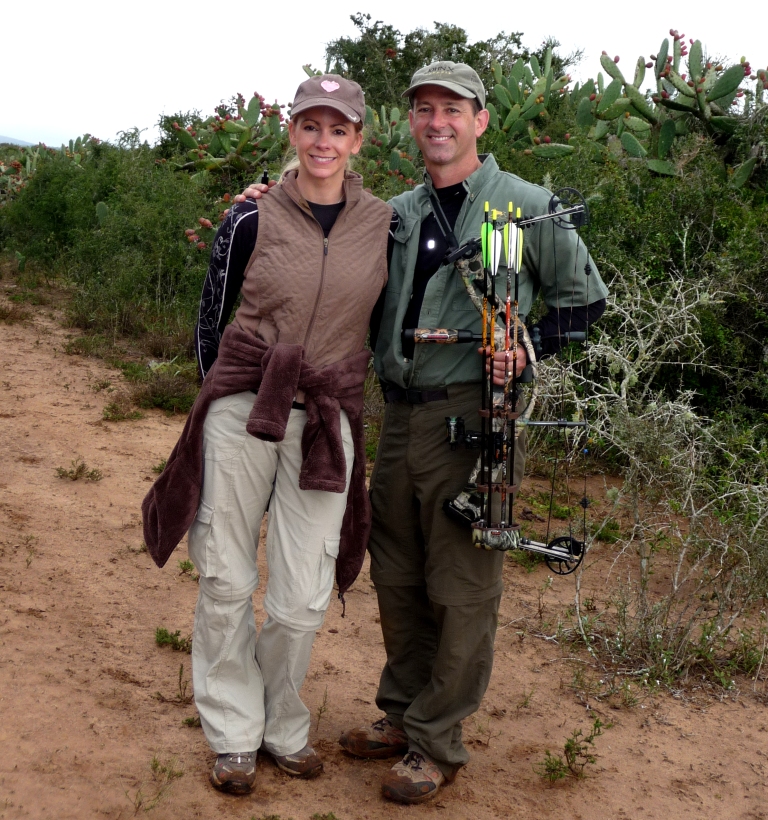 Having had an exciting morning with a Kudu bull coming within 40 yards, a fantastic Warthog came within 30 yards – we just never got a break with the bow.

Boy called us at about 11.00 and informed us that he had spotted a bull in hot pursuit of a group of cows a few ridges over. We made our way over to Boy and went and settled down close to some water with the bow. On our arrival we had a small chance of getting a Bushbuck, which just slipped us. A warthog boar was rutting around us, coming within 40 yards on a few occasions, but we decided to pass it up in the hope of seeing the Kudu. After an hour, we were starting to regret our choice of passing on the Warthog, which by now was long gone. I gave Doug the 15 mins signal and settled back down. A few minutes later I saw Doug’s body tense and glassed towards the direction he was starring. There he was, a magnificent Kudu bull. Our patience and plan had worked! 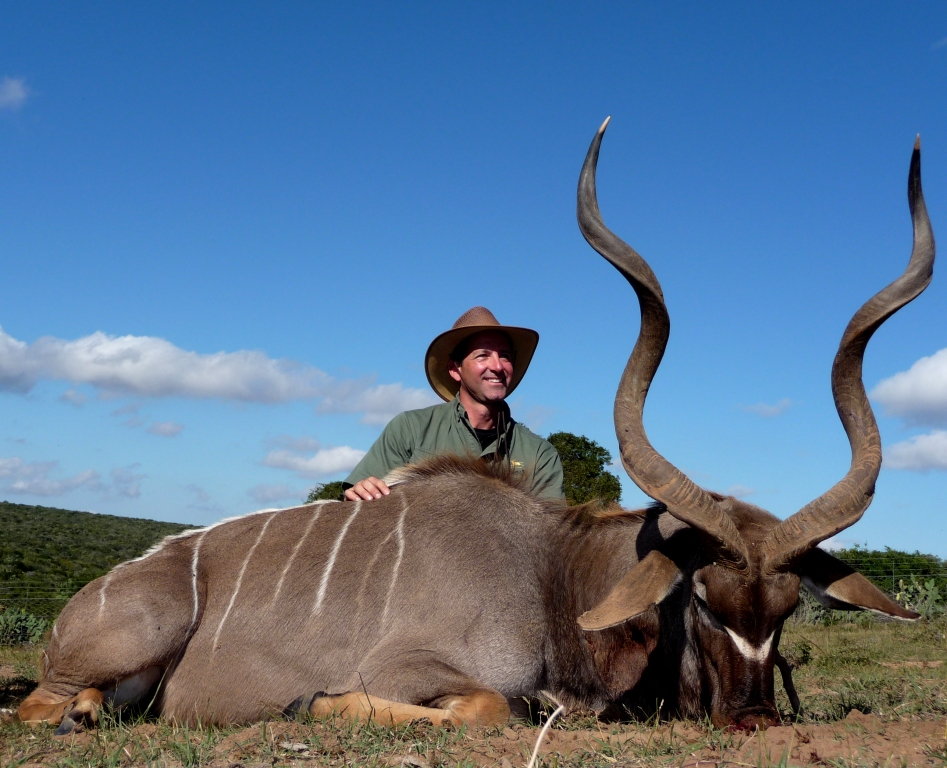 Doug admiring his second East Cape Kudu, in as many safaris with John X Safaris. 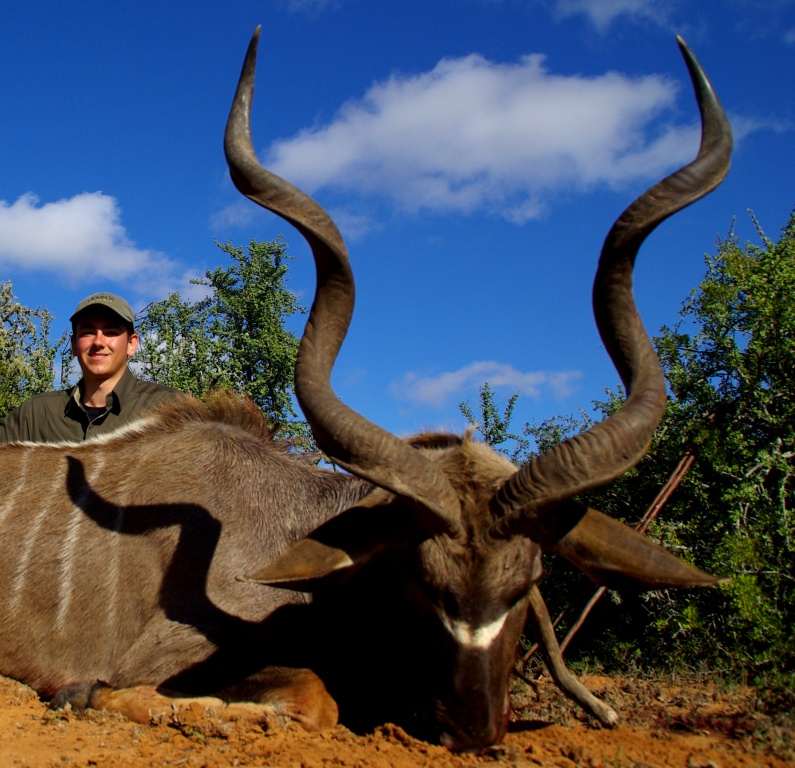 Ryne and Ed, contacted us soon after we had shot our bull to report the great news of Ryne’s first East Cape Kudu. A great Bull.

Day 6 saw the party head off towards the coast for what turned out to be one of the best days of our safari. An Nyala was high on Ryne’s priority list and Doug was always keen for another Bushbuck. 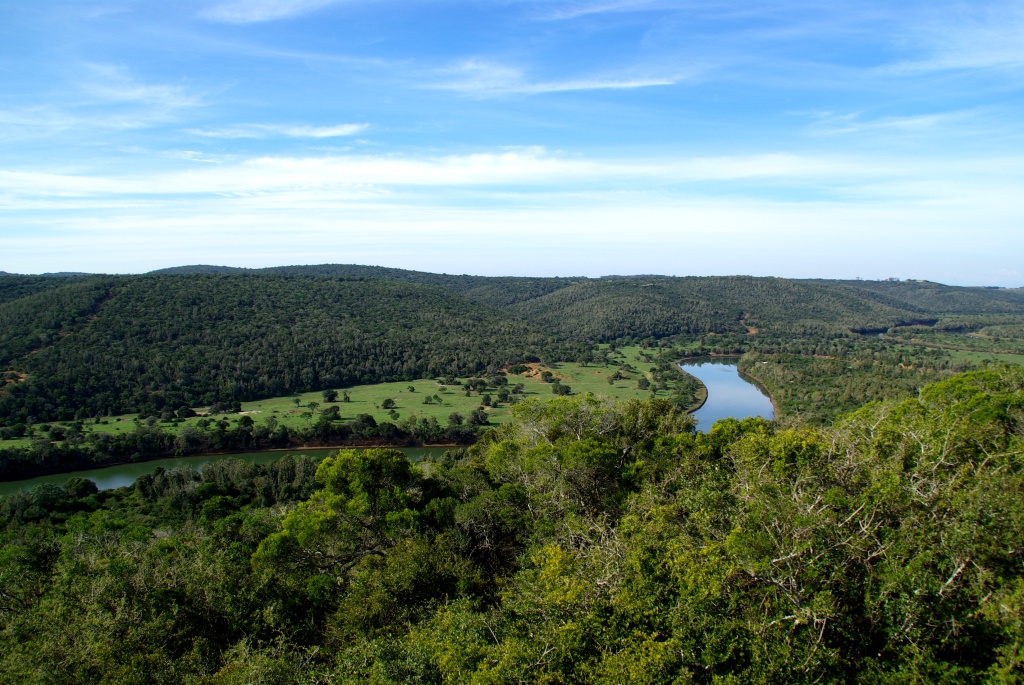 A beautiful morning hunting along the banks of the Kariega River. 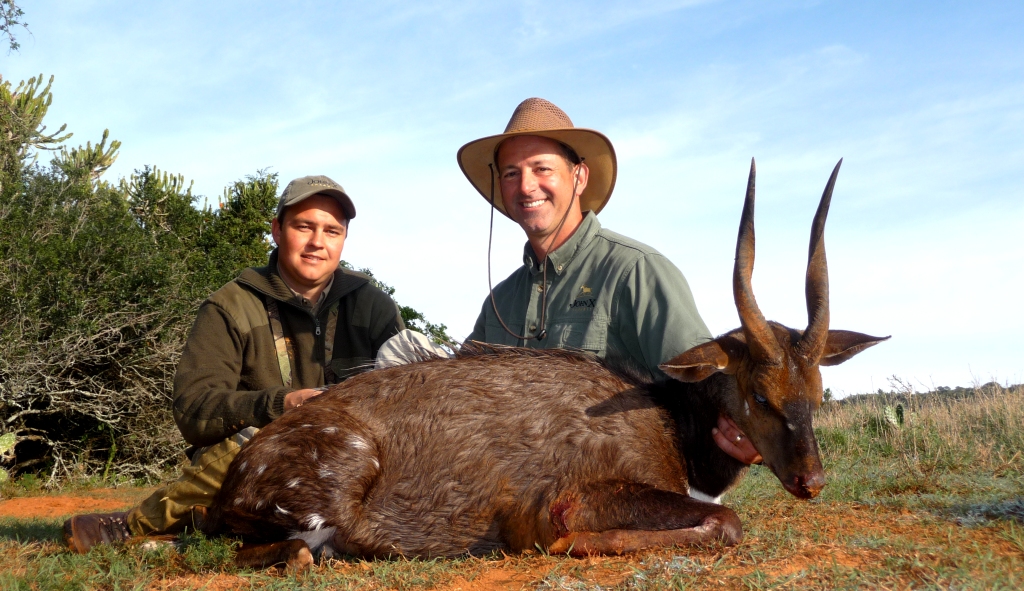 After Doug’s early morning luck, we decided to concentrate on Nyala for Ryne.

Jill got in on the action and got lucky with great photos of some of the Nyala bulls we passed up during the course of the morning. 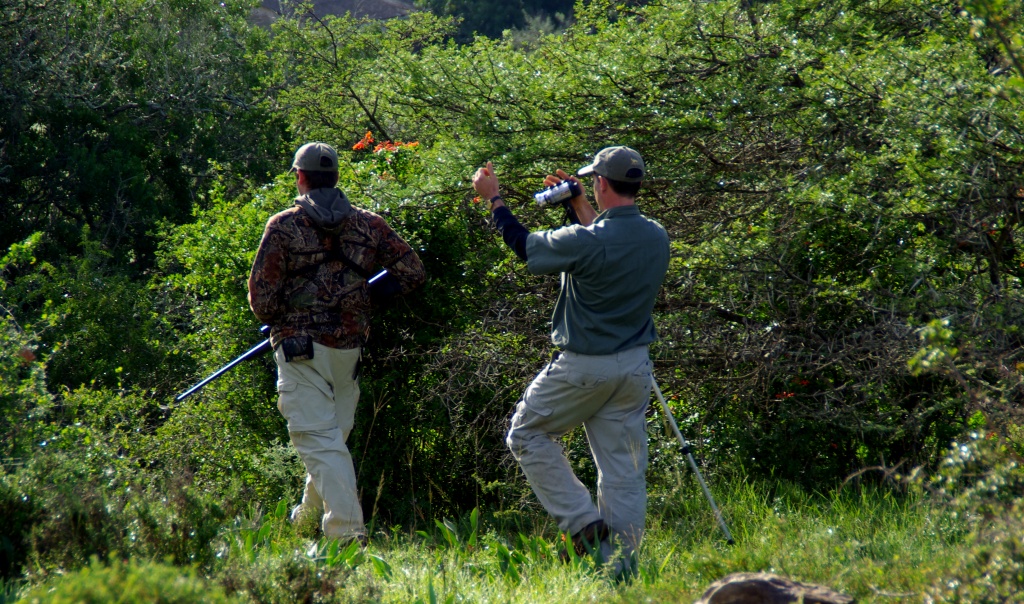 When we finally spotted a great Nyala for Ryne, dad, Doug was at hand to do some filming.

After making several attempts with his bow, Ryne finally decided it wasn’t worth losing such a fine trophy if he couldn’t get within 40 yards with his bow. 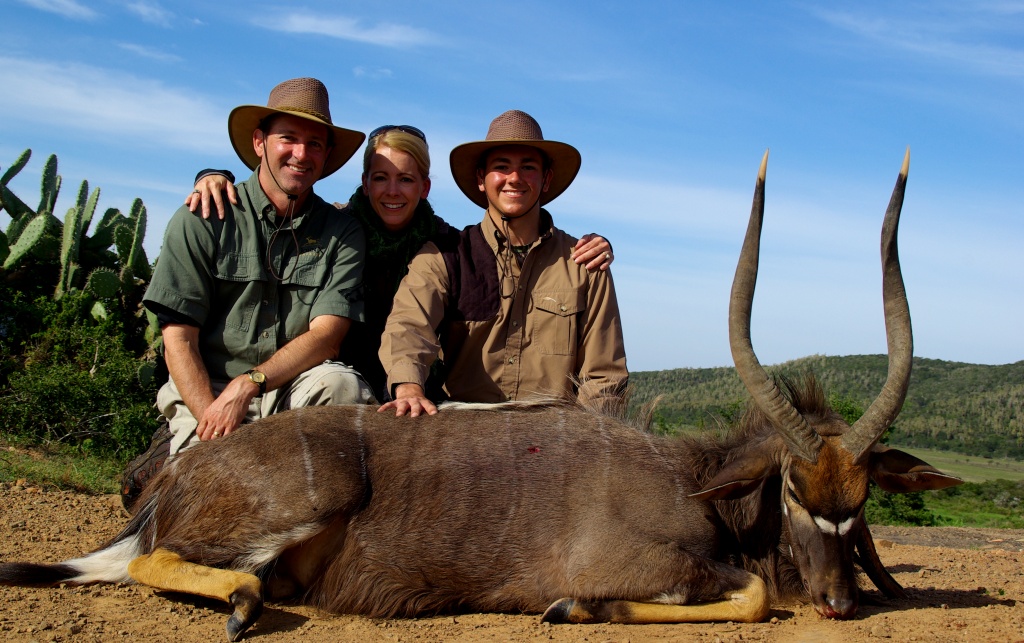 A happy team gathered for lunch out in the field and decided to concentrate on Impala and Bushbuck for the remainder of the afternoon. Doug had never shown any signs of being interested in hunting Cape Eland, but those who know me well will tell you that I love hunting Cape Eland. There’s nothing like a 10-13 year old bull with a huge tuft of darkened hair on its forehead. I had seen a group of bulls earlier and was determined to have Doug see them again. There were at least 3 exceptional bulls. 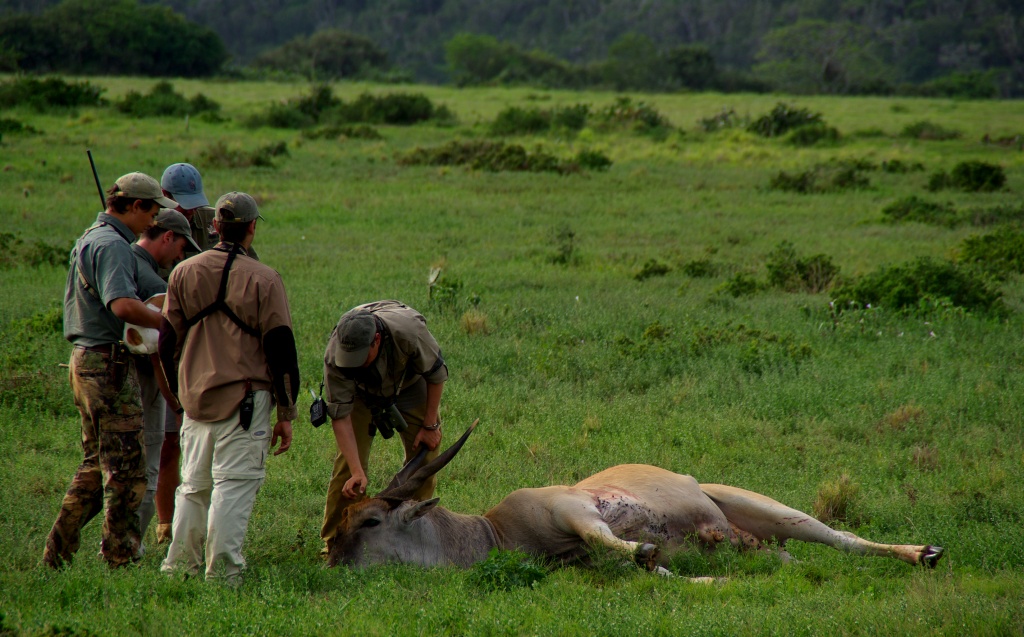 It didn’t take much convincing once Doug saw the sheer size of these beasts. We had a fair share of luck on this particular bull, but you didn’t catch any of us complaining with such a magnificent bull. The team admiring the bulls characteristic features.

Doug – Over the moon!

It couldn’t get much better even if we were the script writers of our own story. We had hunted 3 fantastic trophies on 1 day and still had time to head back to camp for sun downers and snacks. The trackers were still busy taking care of the Eland, a big job on its own, when Ed spotted a very good Impala in the distance.

Ryne and Ed on the hunt, getting ready on the sticks for Ryne’s Impala. 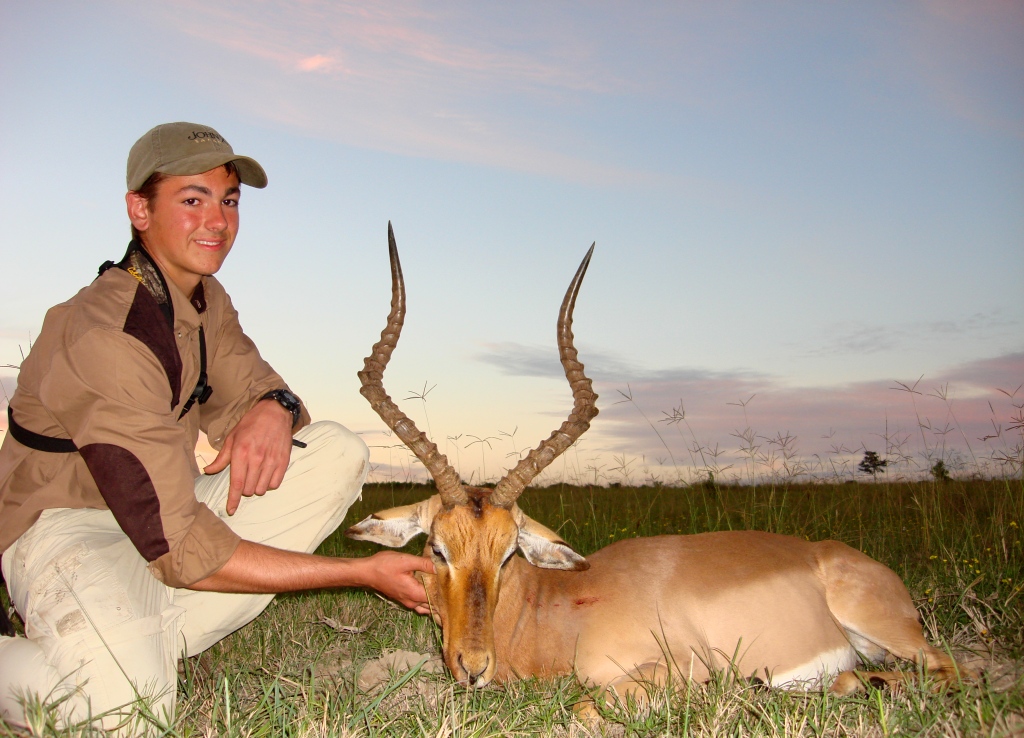 Ryne with his Impala, ending off an unbelievable days hunting.

Day 7, how could our luck continue you may ask? We were all aware of what we had been part of up until this point, but the hunting gods kept it coming. 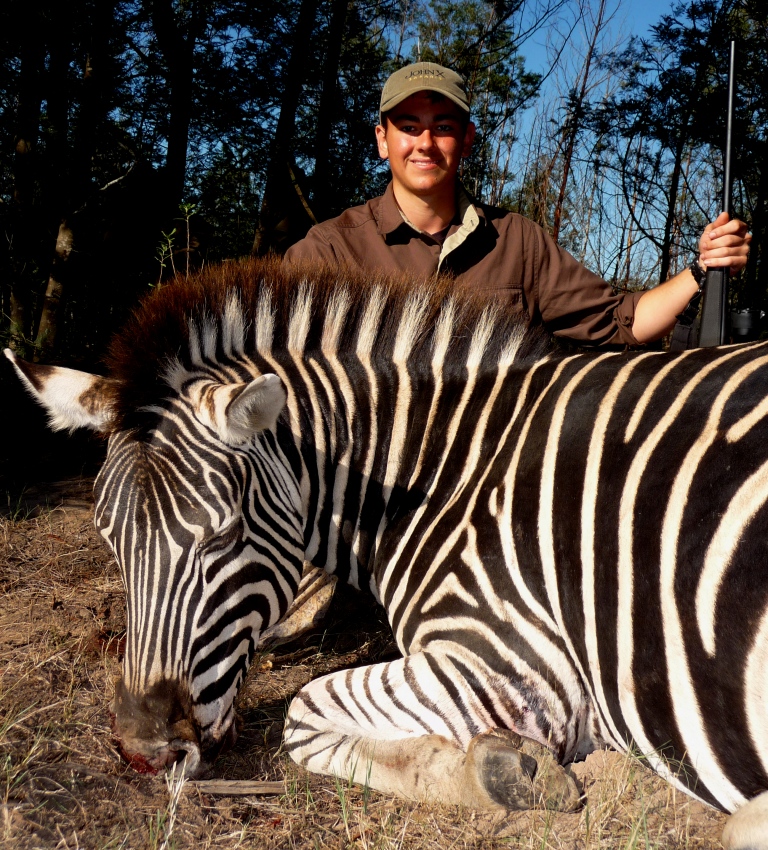 Ryne with his Burchell’s Zebra. 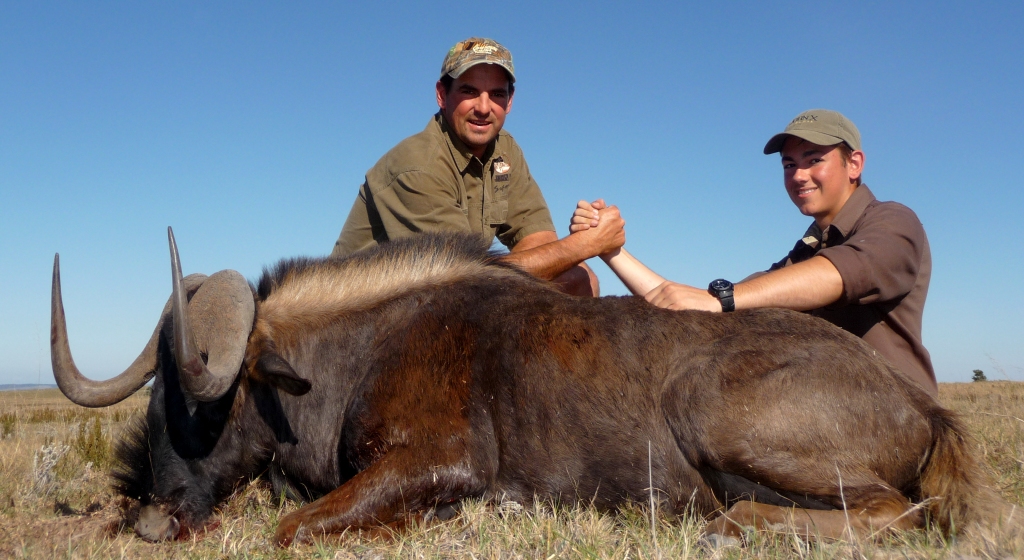 Ryne and Ed with a great Black Wildebeest. 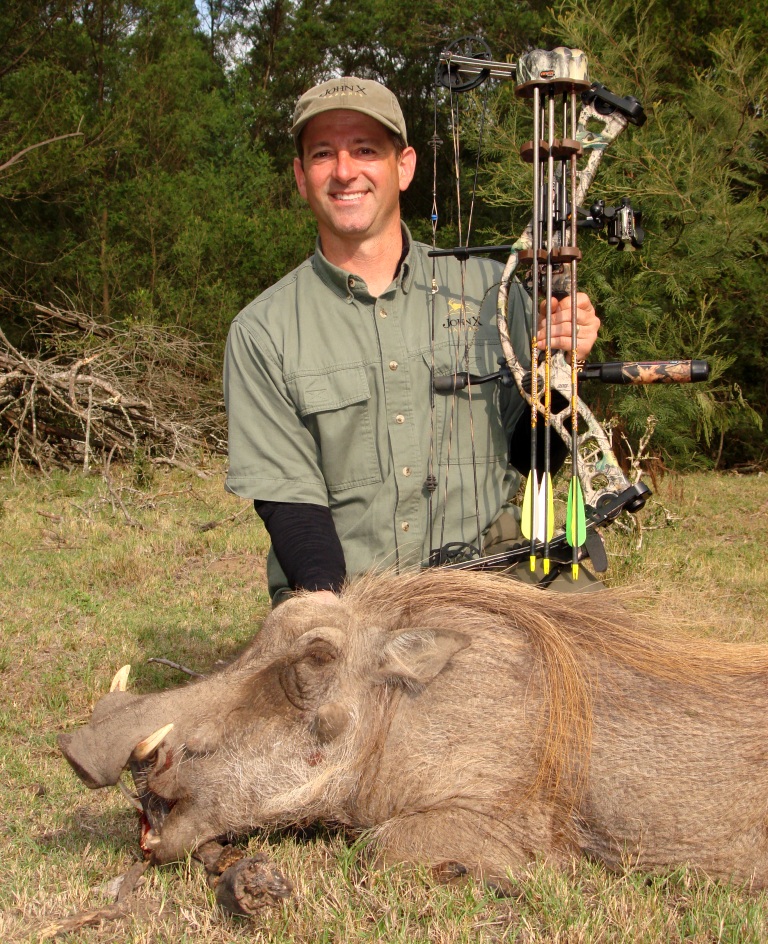 Doug and myself having fun hunting for camp meat. We had flung numerous arrows at Warthogs up to this point. This pig never saw it coming!

Day 8, it finally came. We got skunked! Nothing what so ever.

The remainder of the hunt was spent visiting, taking pictures and dedicating a few hours towards hunting every day. Jill also got in on the action with her camera taking pictures of…. 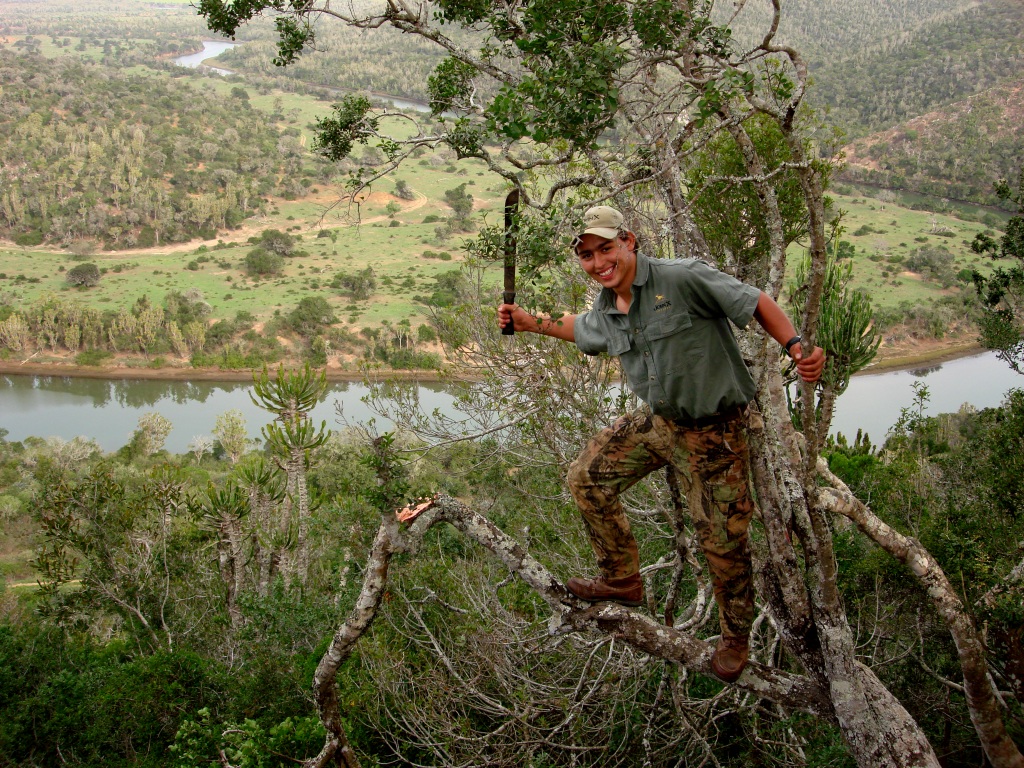 some of the characters we met….. 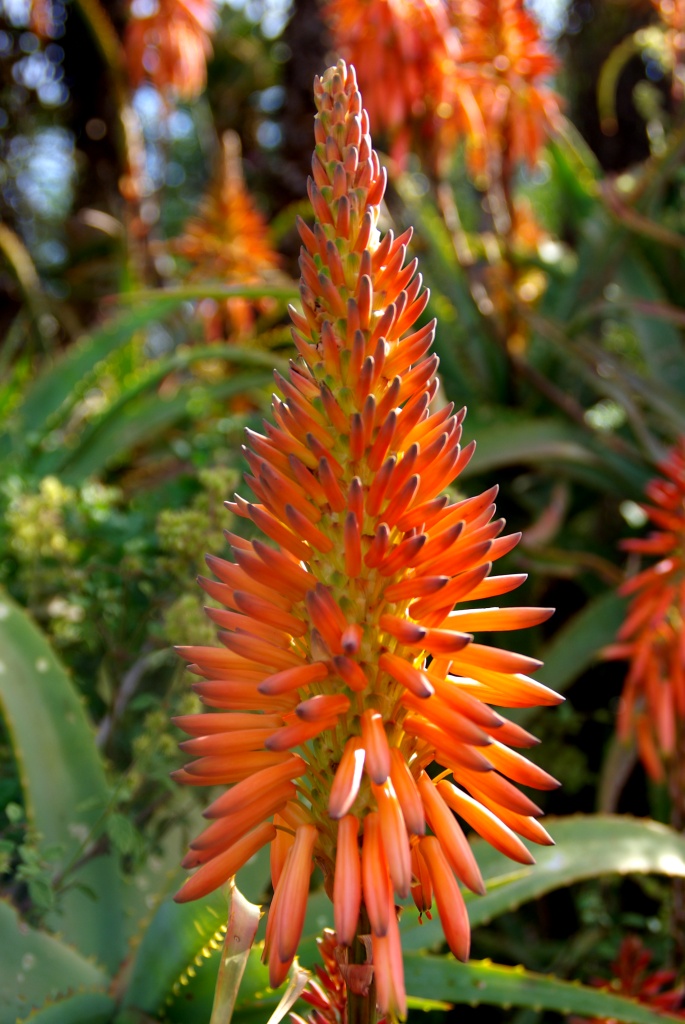 some of the scenes we saw…. 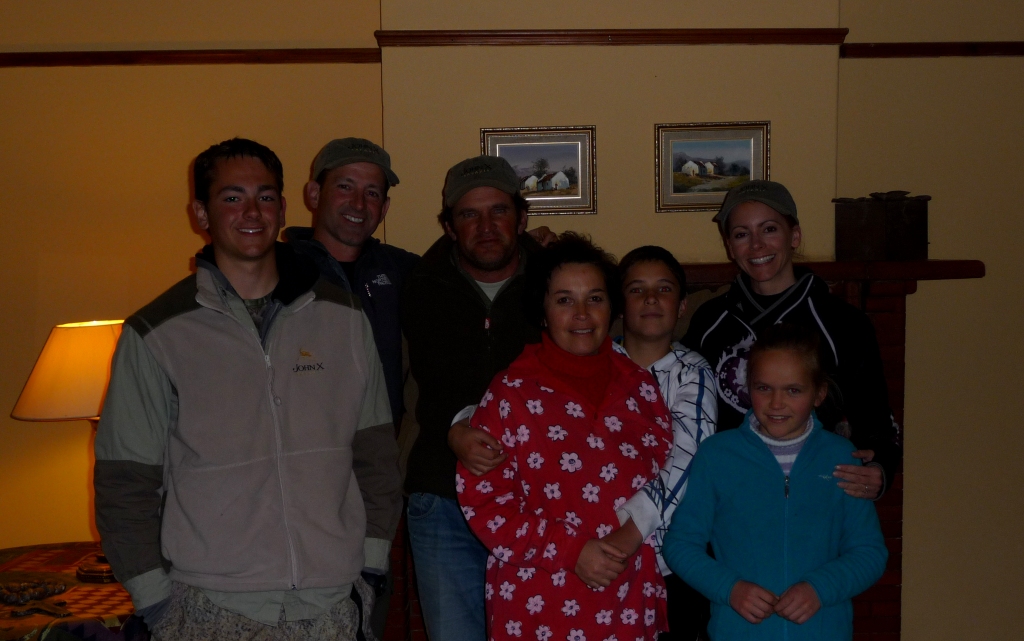 some of the friendly locals we visited…. 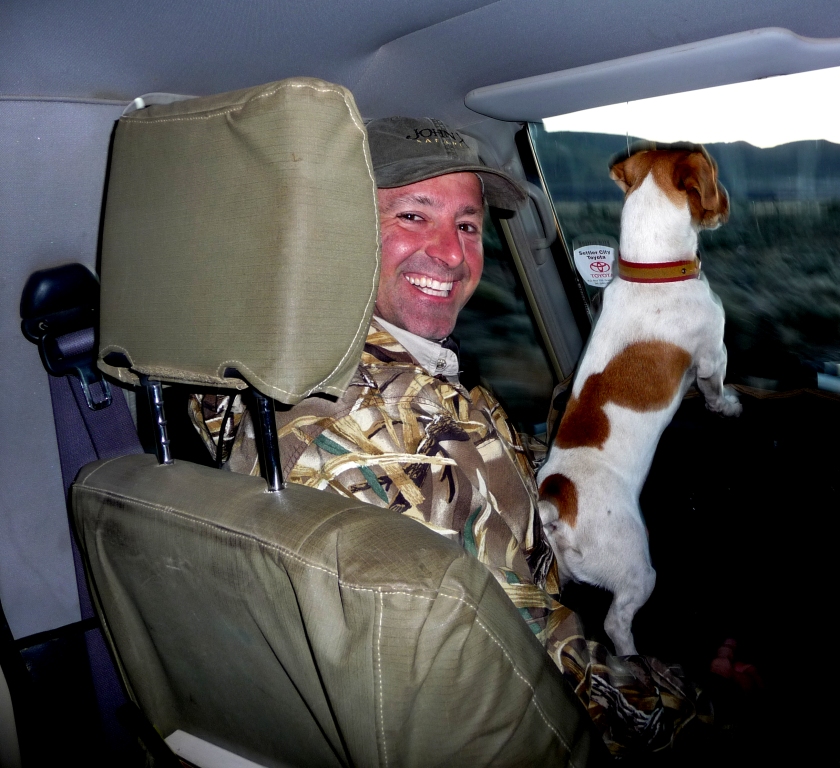 some of the friends we made…. 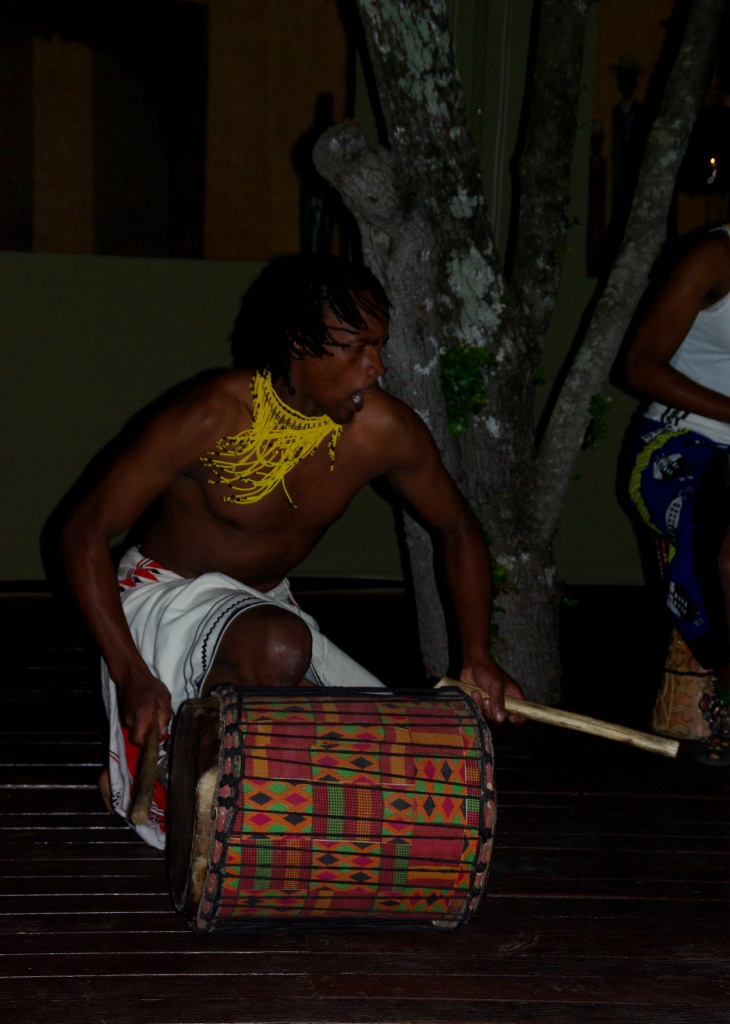 some of the culture we experienced…. 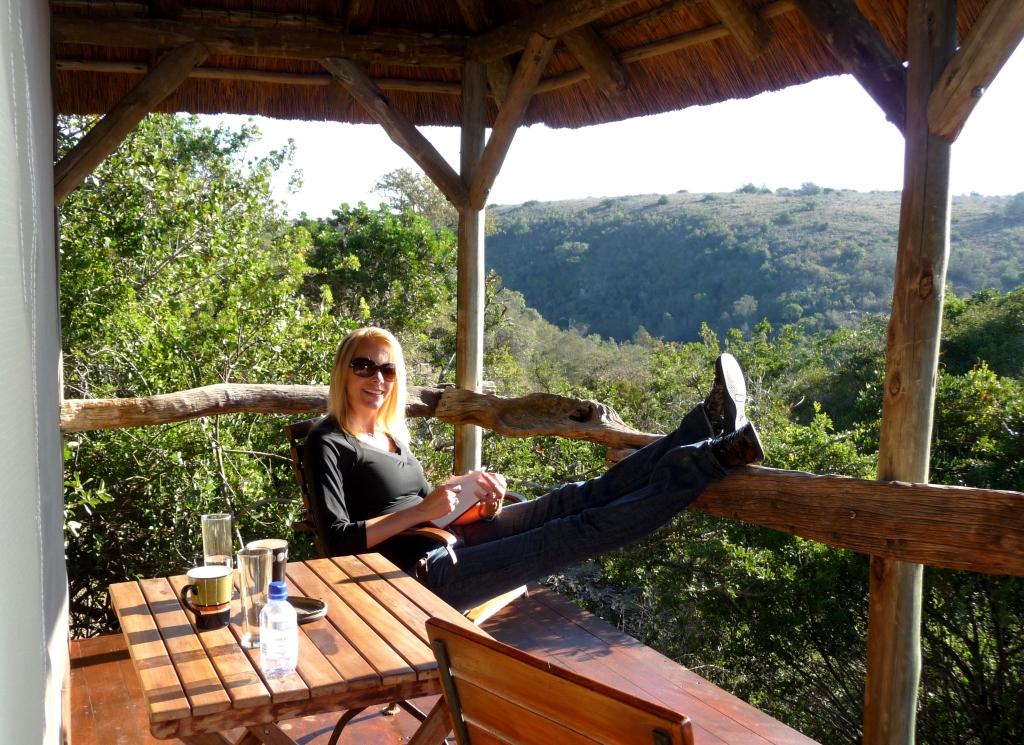 some of the down time…. 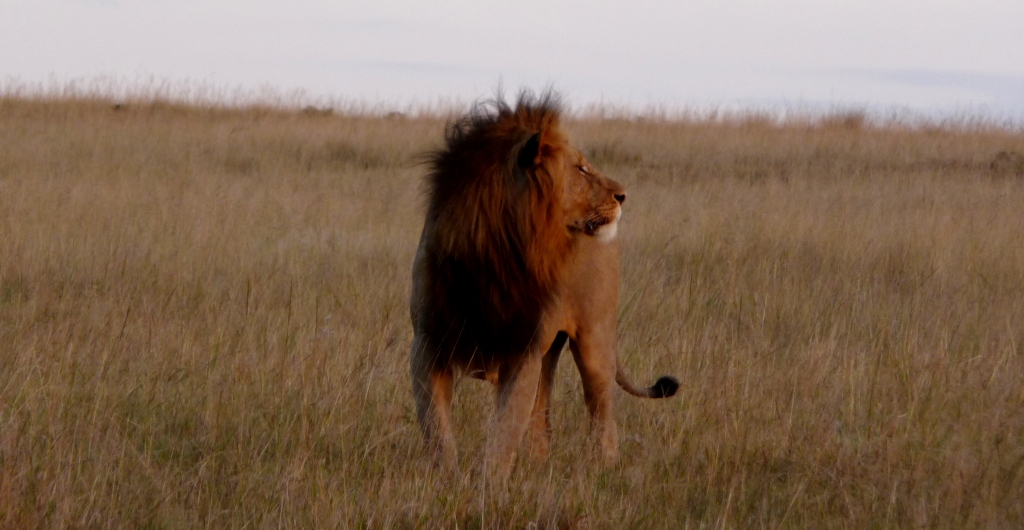 AND falling in love with Africa…. Because there’s no place like it!

For all of us involved with this hunt, it was truly a privilege to have been a part of Ryne’s graduation gift. We wish him all the luck in the world for college and hope to see him back in Africa some day again. Doug and Jill, it was a pleasure my friends, until the next graduation…