The harder I try, the luckier I get……

Javier Iniguez, an Spanish friend of ours has been hunting with us since the early 90’s. We’ve enjoyed the many trips throughout South Africa and those across our boarders. He has hunted just about everything available throughout Southern Africa and has spent more time than most visiting the African continent. He now returns each year for his fix of Cape Bushbuck hunting.

Javier with family and friends on one of our previous adventures to the Kalahari Desert, Botswana.

Over the years he has hunted fantastic areas and harvested some exceptional trophies. This year saw him return to hunt Cape Bushbuck, an ongoing affair he has enjoyed for nearly 20 years.
Our plan was to head north-east onto the boarders of the Transkei, an area that we had never hunted before. The much-anticipated first morning was met by wet and windy conditions, never good for hunting the elusive Cape Bushbuck. Day 2 came and went with the continued poor hunting conditions. Day 3 saw a gloomy group of hunters pack their bags, with not a sign of a Bushbuck being spotted, let alone having had a chance at a good ram. More bad weather was on the way. 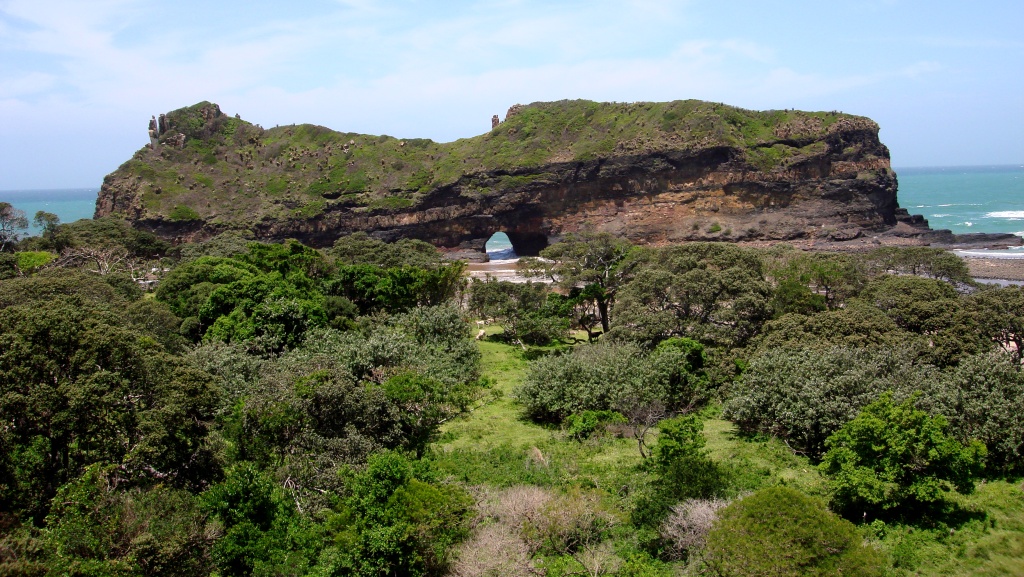 “Hole in the Wall” – Scenes from a previous visit to the Transkei, also known as the Wild Coast. 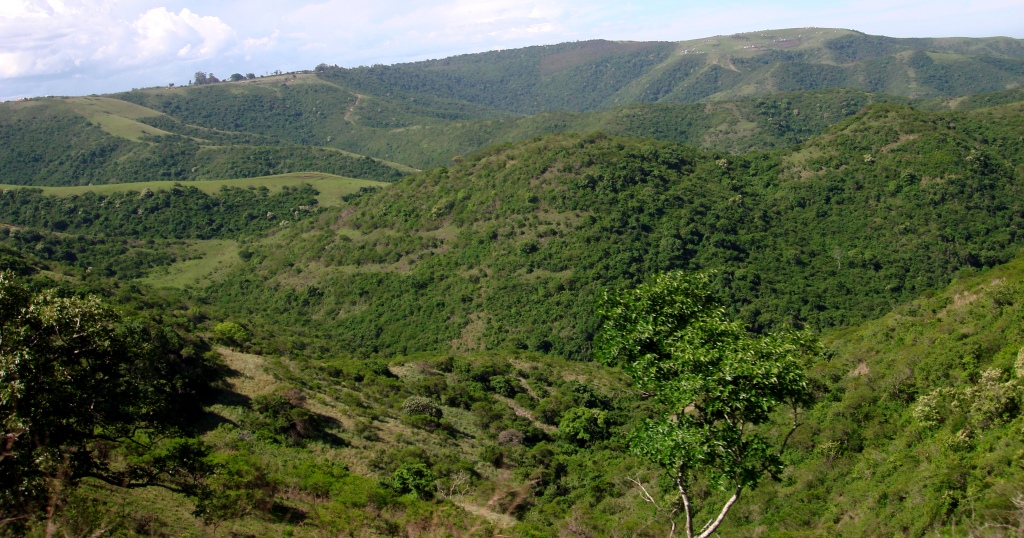 Some of the terrain we were hoping to hunt with weather like this.

Having arrived back down south, a rejuvenated team headed into an area where some good Bushbuck had been spotted during the course of the previous month.  Our idea was to split up and sit for 1 hour intervals at different vantage points in the hope of spotting some Bushbuck. The first few hours of the day started slow, but as the day progressed we started experiencing some activity.
At 17.00 I was just about to head over to where Boy, our tracker, was sitting when the radio cracked to life. Boy had spotted a good-looking ram a few hundred yards from his position. We started off immediately. Our light was fading fast and we both knew there was only 25 minutes of day light left. Arriving with Boy, completely out of breath, Boy confirmed that he recognised the ram as one we had been after for the past 3 years.
Javier steadied himself , took his time and then came the crack from the 300 Win Mag. A solid thump and the ram disappeared into the undergrowth. At first glance the shot looked good in the fading light, but one never knows with these aggressive forest dwellers. 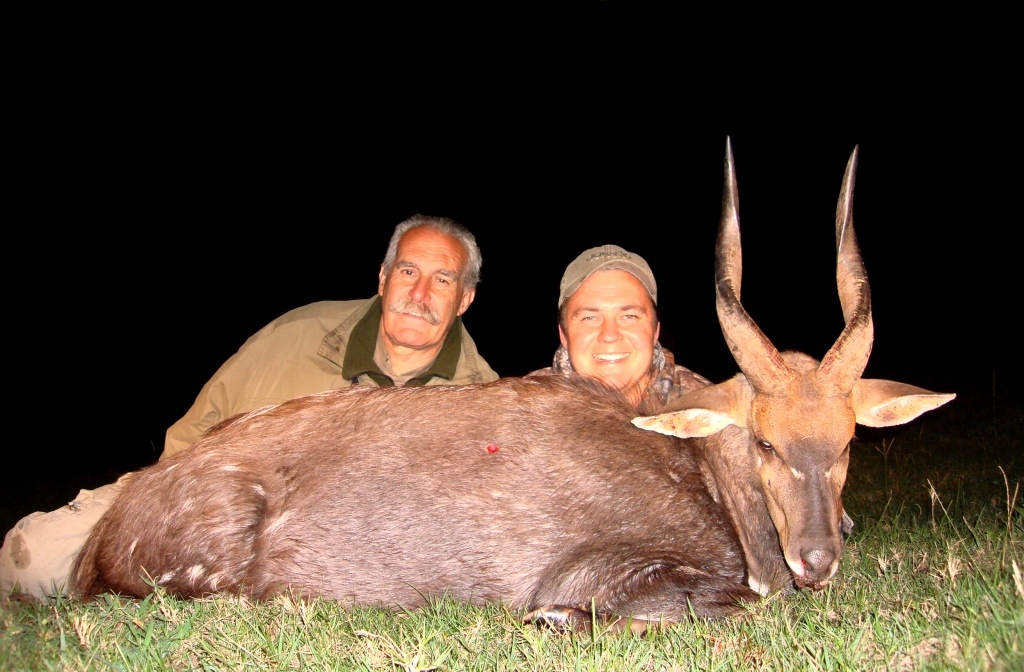 The luck of the hunt. One for the memories….

Only once we arrived and admired Javier’s Bushbuck did we realise what an exceptional trophy it was. We had spotted him 3 years previously, we had seen him only once since then, but there was no mistaking the ram. He had bases like an Nyala and boasted a body like no other. He truly was the ram of a lifetime.
The following day we headed out at midday to chance our luck and enjoy an evening hunt down on the coast. We hadn’t sat down for 10 minutes when we hit the jackpot again. 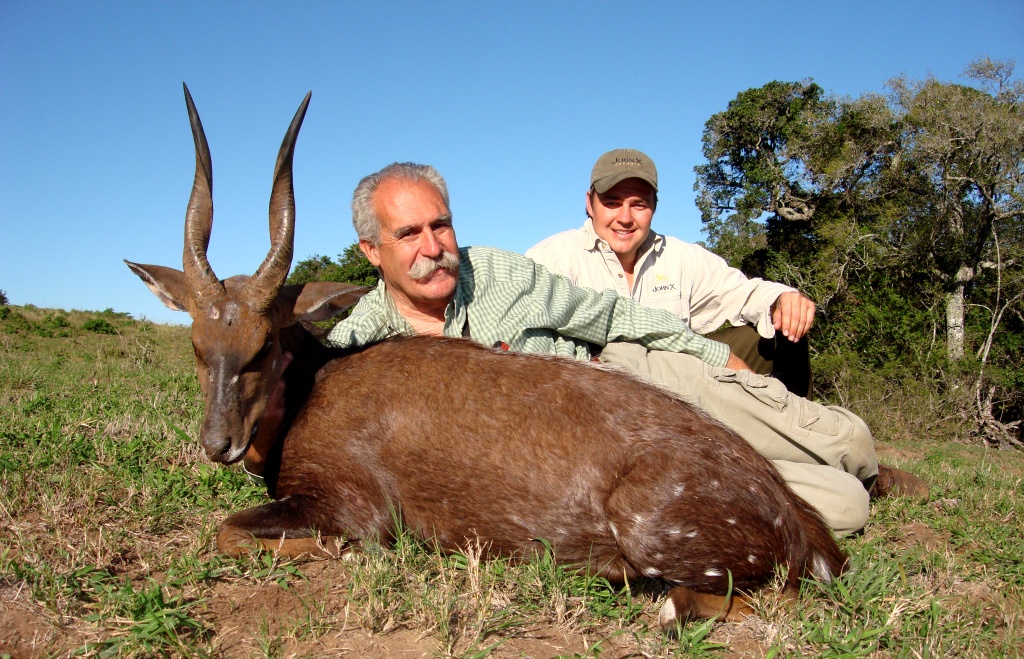 The cherry on the cake!

Who would have given the odds for a monster in a week of poor weather, let alone two exceptional rams in 24 hours?
It could only have been Javier. He will be back again next year, and the year after that, and the following for many more to come. He wont be back to try to beat or better his current Bushbuck, he’ll be back to take up where he left off the year before and continue with his Bushbuck affair.

In his own words; “The harder I try, the luckier I get and the more I enjoy.” I for one wont be betting against his luck!