Earlier this year we had an interesting request from our Spanish partners Camino Real Hunting Consultants. They had a client who was interested in a highly specialized safari. The client’s time was limited and he needed some of the rare and more difficult species only available in the Eastern Cape, South Africa. What we failed to realise, he wanted 2 of each specie. One for full mounting and one to shoulder mount.
Jose Recio is no ordinary man. Neither is his wife Filo. At times it was hard to determine who was fitter when walking the mountains or who was taking the lead on some of the finest shooting we’ve ever come to see. The Recio’s were accompanied by one of our partners from Camino Real, Alvaro Mazon. Alvaro proved to be a great help and certainly a member of the team that we will not be leaving behind if a hunt similar to this ever came up again.
We started our Safari in the south from our Coastal Base Camp. Professional Hunters, Carl van Zijl and Jean MacDonald, were to manage the hunt and achieve the near impossible. The message was quite simple, +- 15 Species and 2 of each specie. 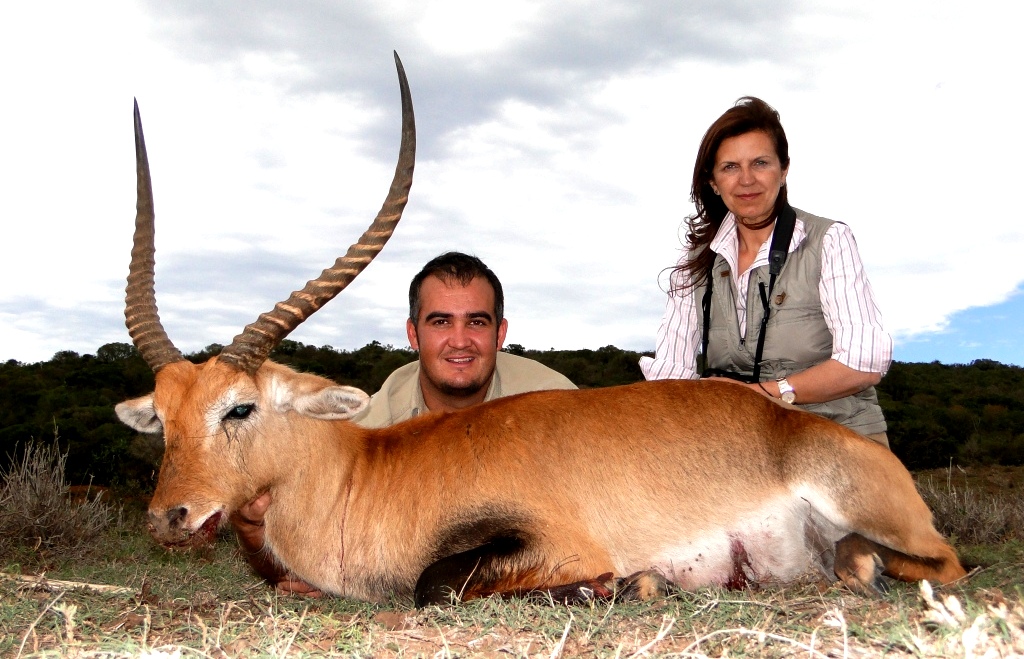 While Jose was out hunting Blue Duiker with Carl and Alvaro, Filo and Jean were the first to draw blood with this super Common Lechwe.

The Blue Duiker hunt was proving harder than what the hunters had anticipated. We only really got one chance very late that afternoon, but by that stage the 30 degree heat had taken its toll. At the end of day 1, Blue Duikers 1 – Hunters 0.
During the course of that first day I had the opportunity of being part of one mans vision. Jose explained to us that he had a dream of building his very own Wildlife Museum. He was personally building and stocking the museum on his farm El Pimpollar, situated in Sierra Norte, only a few kilometers from Seville, Spain.
While he and Filo may have the idea of stocking it personally, that’s where it ends. From there he wants the public and especially kids to come and visit the museum, he wants a legacy to be left behind for all to enjoy after he is gone.
John X Safaris and Camino Real Hunting Consultants were proud to be a part of Jose’s dream. It took many hard yards and even harder work to achieve the quality, variety and experience that made this safari one for the ages.
Sit back, relax and view their experience with a selection of pictures from their Safari. Keep in mind, this was not their first Safari to Africa, all the regular species had been hunted on previous trips. 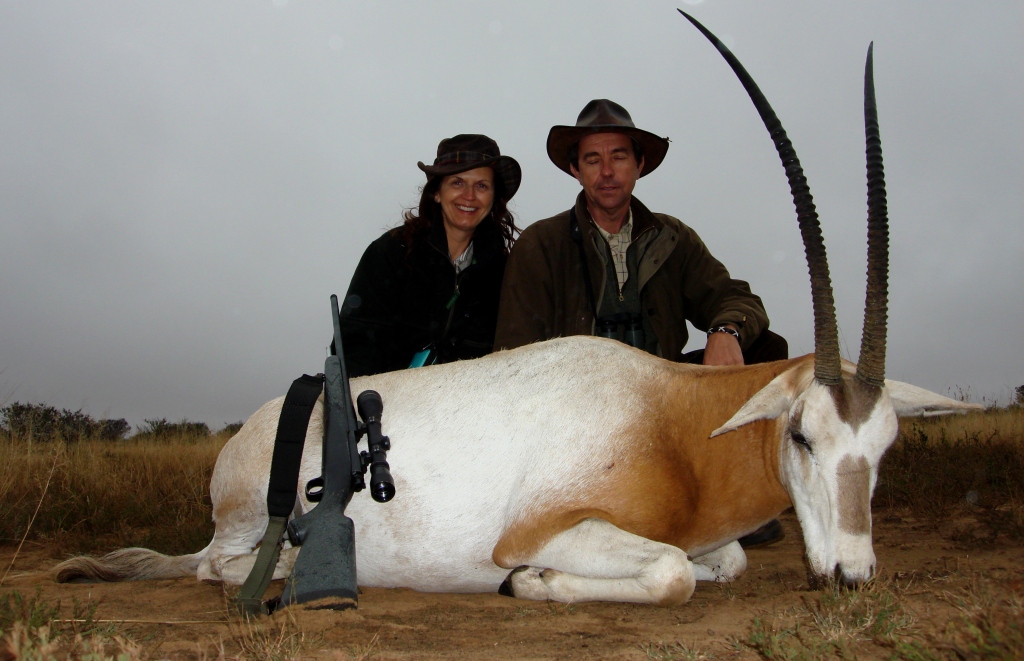 Both Jose and Filo had hunted right around the world, but neither had ever hunted Scimitar Horned Oryx. Jose and Filo each harvested great bulls. 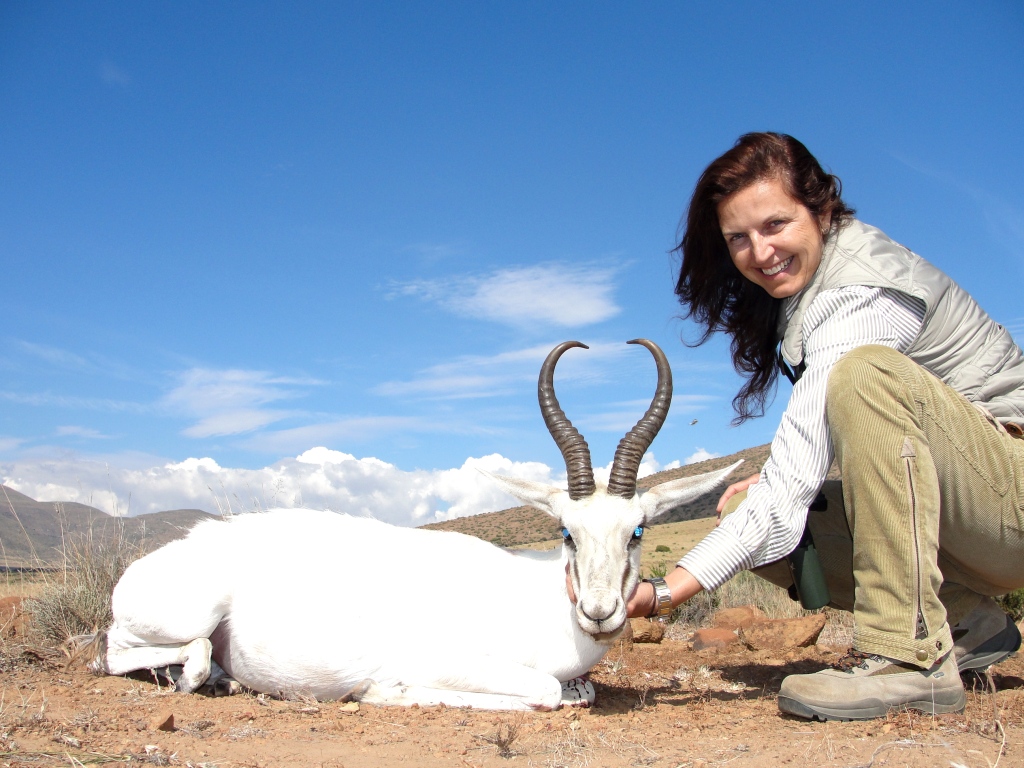 No trip to the East Cape would be complete without a selection of all the Springbuck color variations from the Karoo. Filo with a massive White Springbuck. Not often that one sees the tips of the horns on a White Springbuck hooking back like this ram, or her second she hunted. 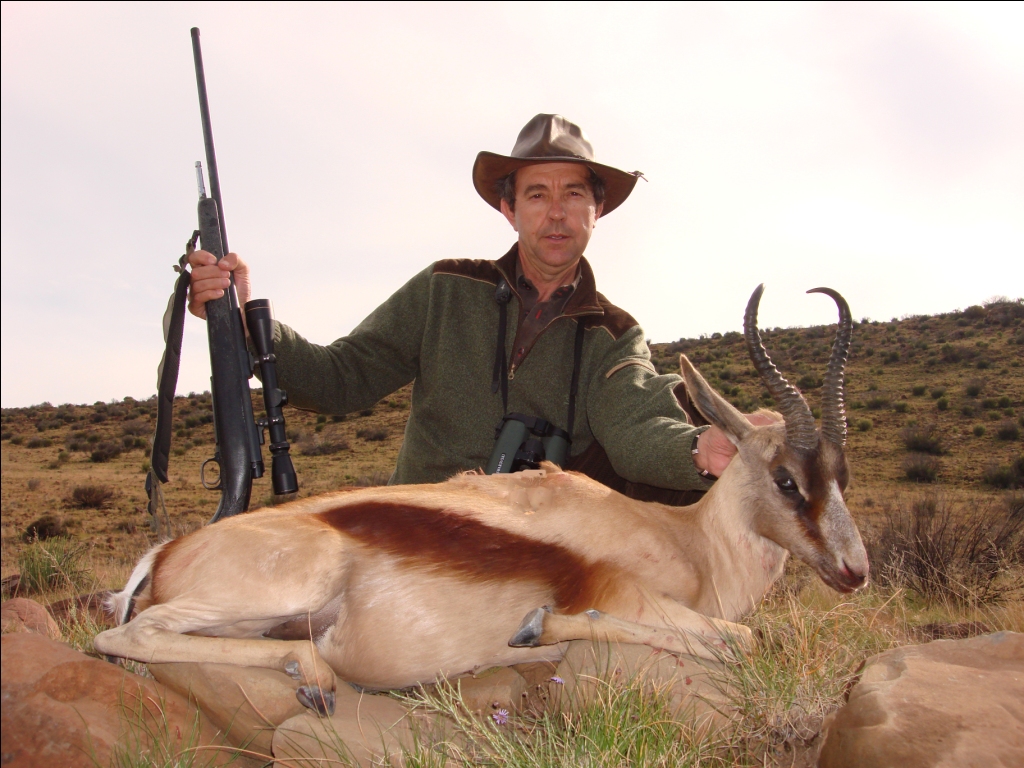 The rare Copper Springbuck. Not many a hunter could boast with two in his collection, Jose wasn’t going to let the chance pass him by. 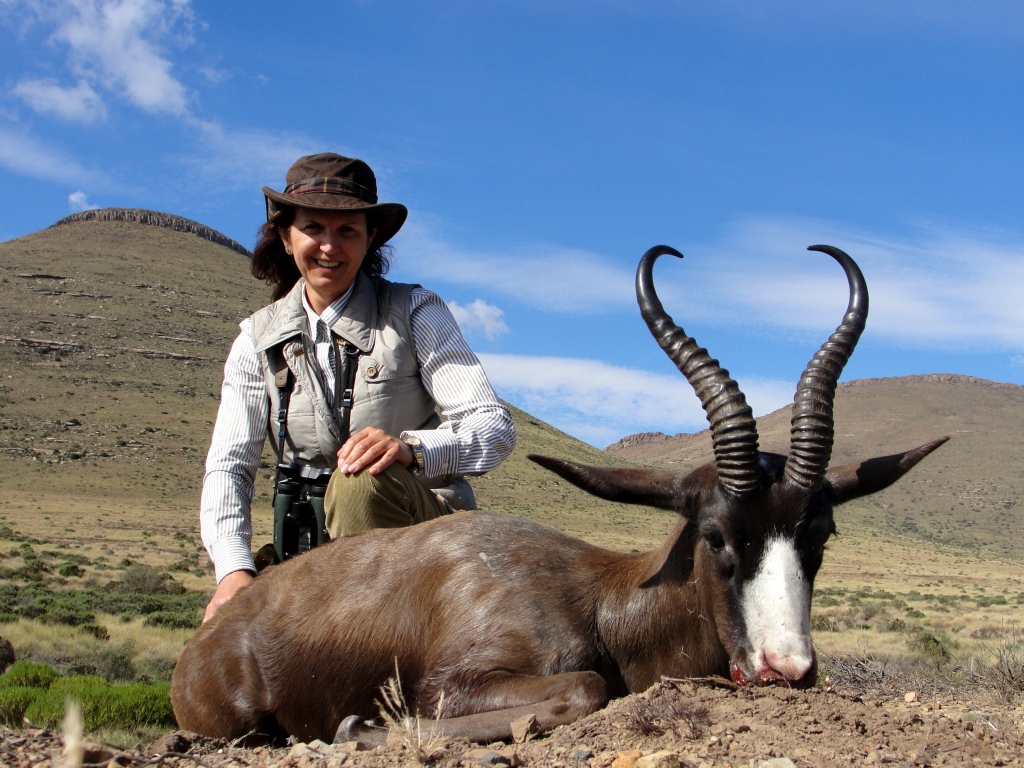 On a safari like this one, we were always going to need a fair amount of luck and above average shooting.Filo dropped her monster Black Springbuck ram at 397 yards in gusting 35 mile an hour cross winds. Some may call it luck? She did it more than once! 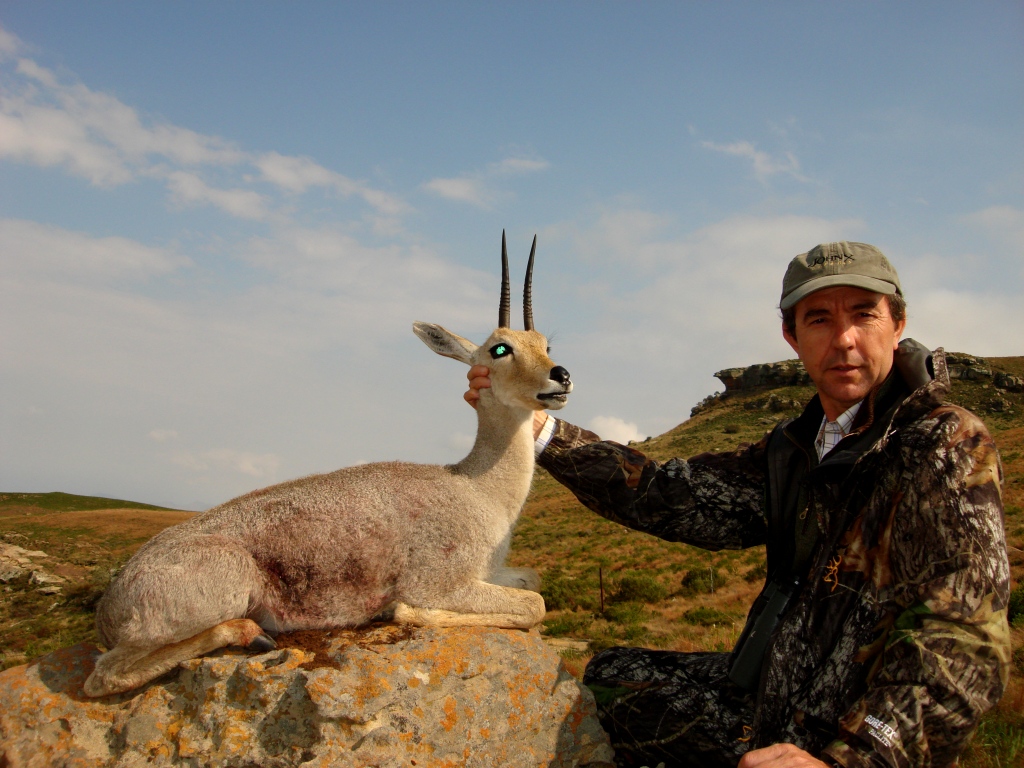 Those hunters who’ve hunted Vaal Rhebuck before will know that being successful on one good ram is hard enough. Try Jose’s luck. 2 great Vaalies in a morning. Jose was extremely fit and a master shot at long distances. 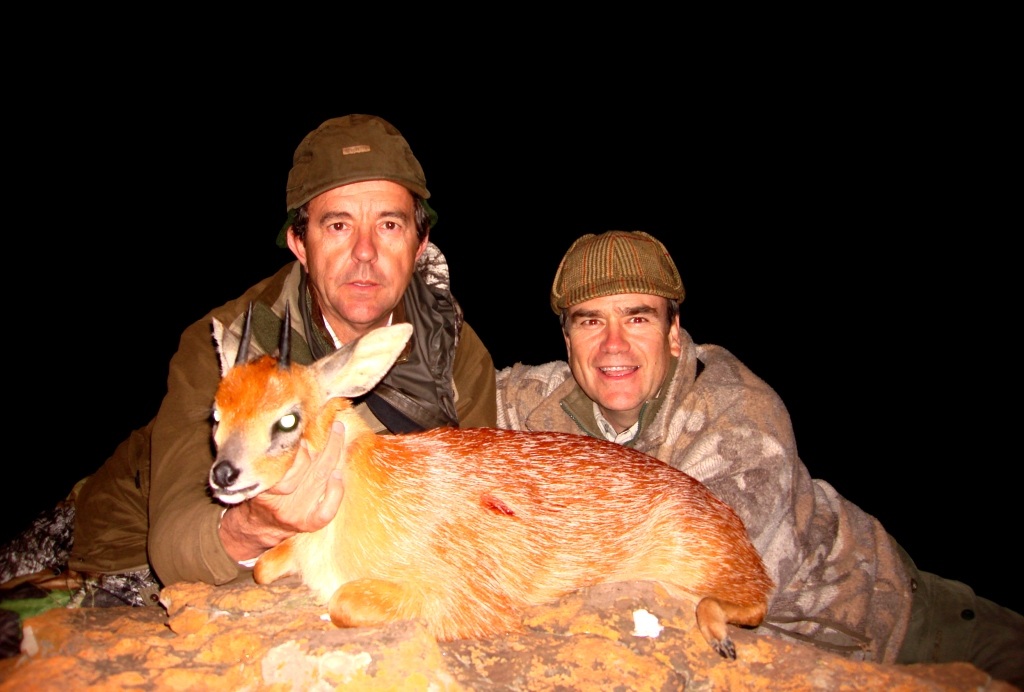 When we first received Jose’s request, we knew without even checking, he needed the rare Cape Grysbuck. This specie is extremely shy and mostly nocturnal. We hunted hard and endured many cold hours at night in search of Grysbuck before harvesting this beauty. 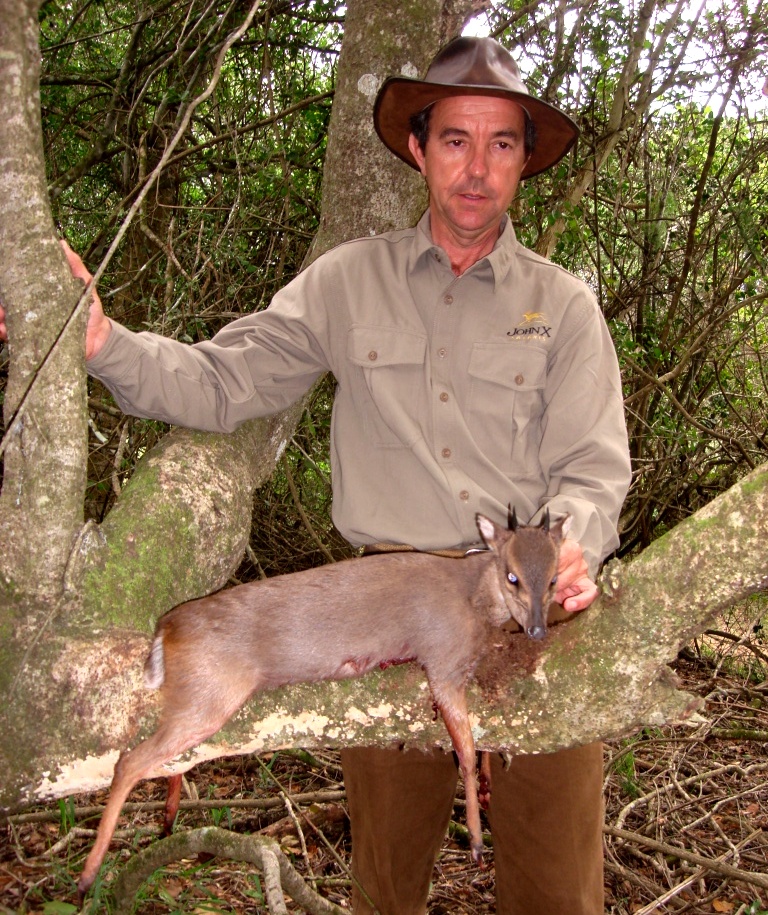 We finally did get lucky with a Blue Duiker. Last morning, first beat with the Jack Russel’s, we were cutting it fine, but this was one of Jose’s biggest priority trophies.

We only have 2 Oribi on quota annually, man was it difficult keeping Jose away from hunting a second. Hunting Oribi along the coastal dunes is what Jose considered “different”. We’d tend to agree, it’s not everyday that one gets to hunt with the waves crashing in the background! 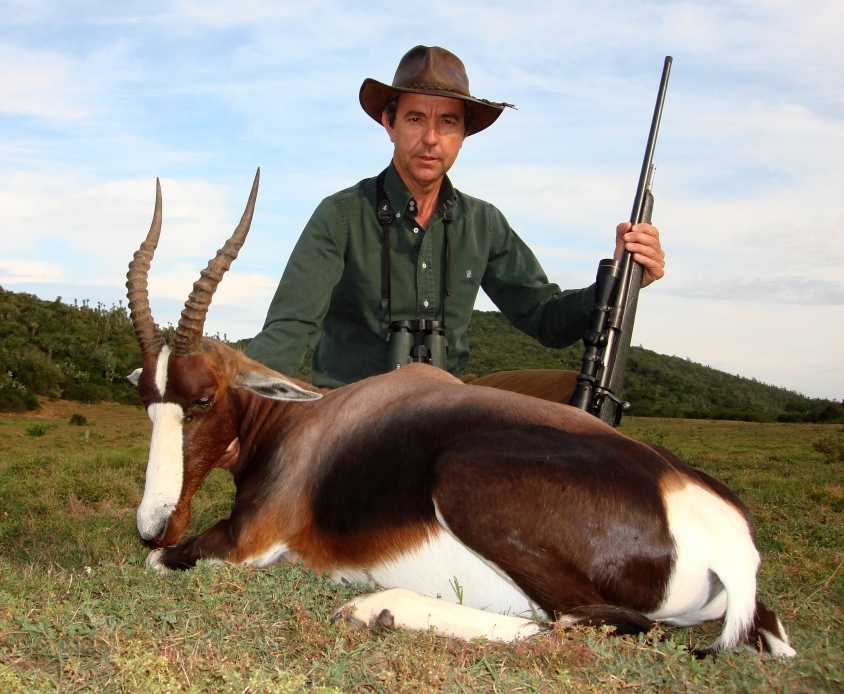 Every serious collector needs a Bontebuck in his trophy room, Jose and Filo both hunted one. 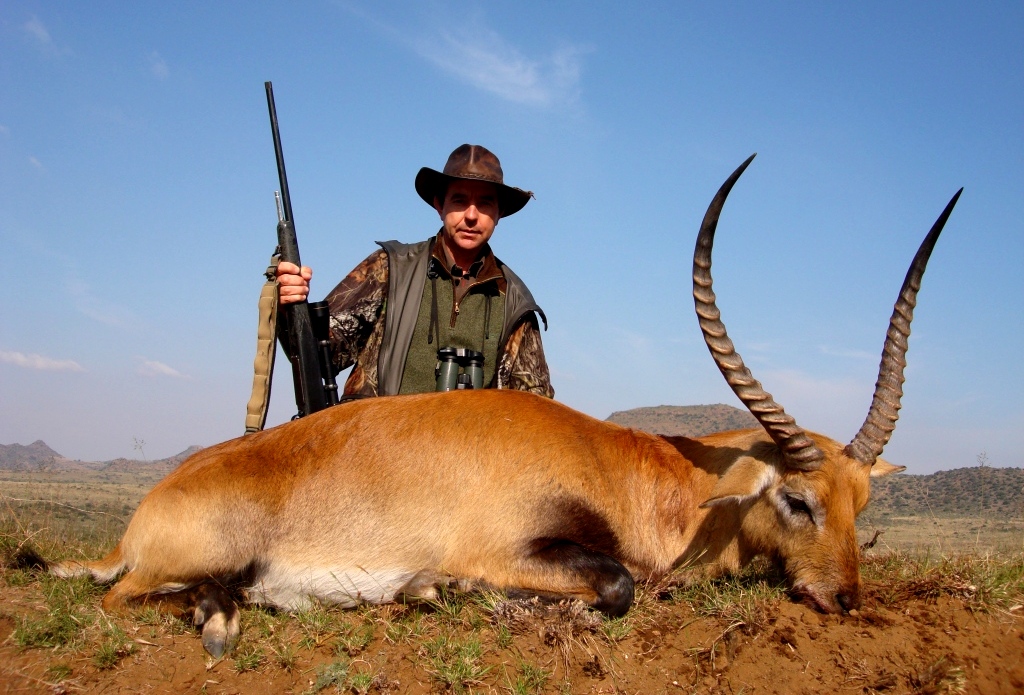 After Filo’s Common Lechwe it didn’t take much to convince Jose to hunt Lechwe. This bull was finally put down after a great stalk that took over 2 hours to just get into position, then the waiting game started. The bull finally stepped into a clearing and Jose made sure of his shot. A great reward, super Lechwe bull. 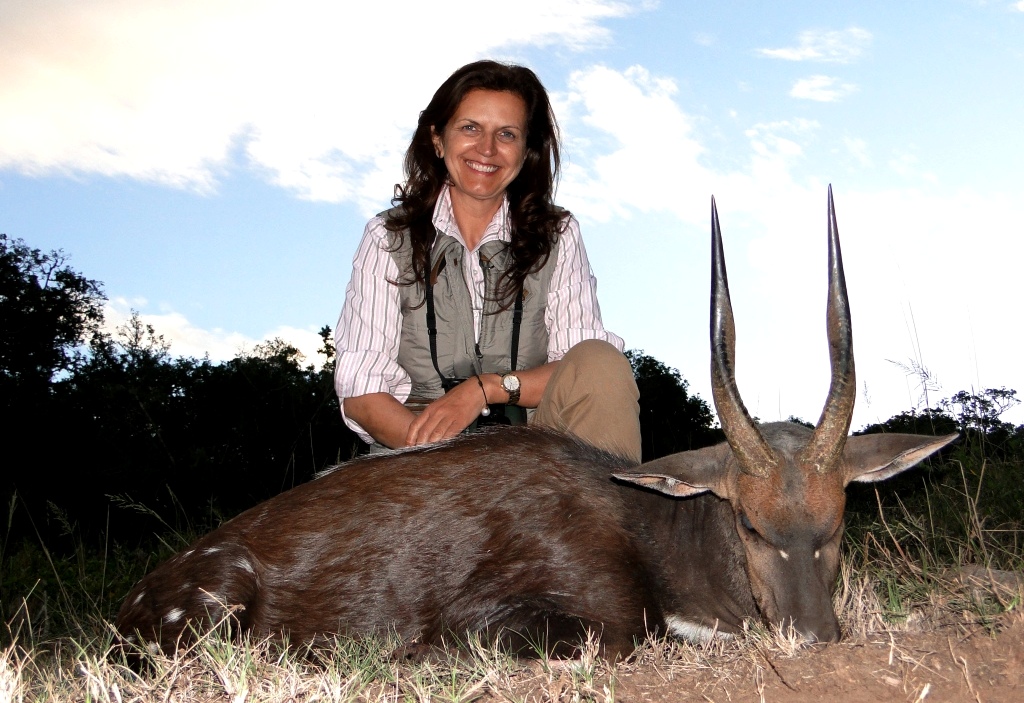 The smile says it all! A late afternoon Cape Bushbuck. 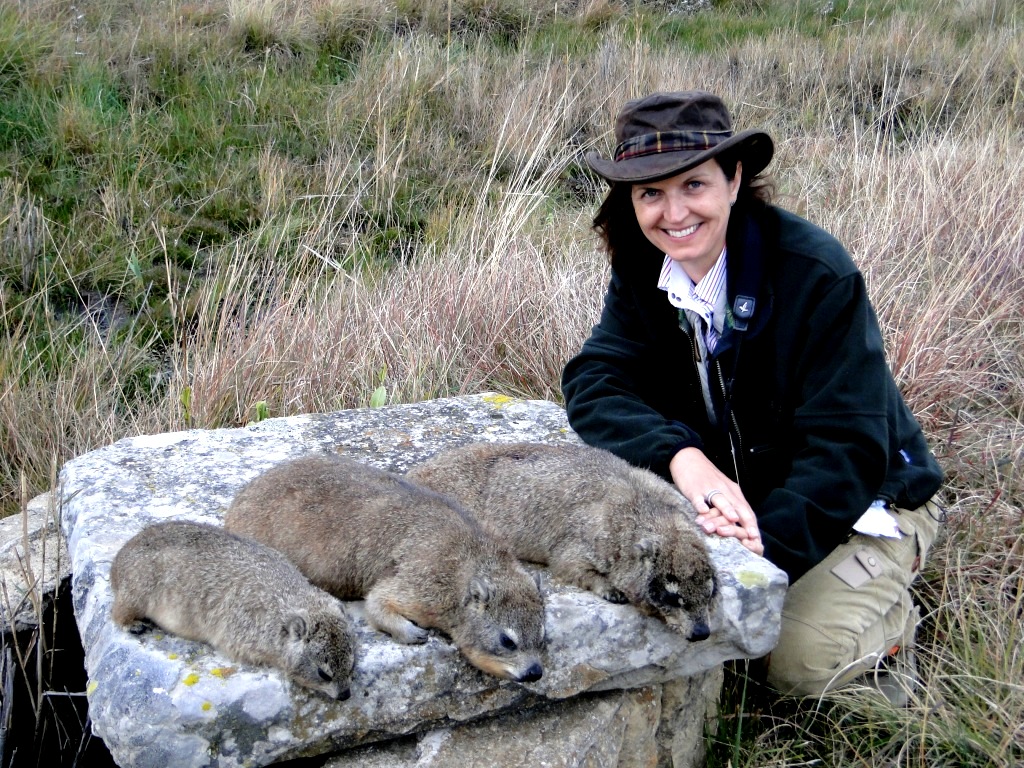 We all agreed that no Wildlife Museum would be complete without a “Dassie”(Rock Rabbit / Hyrax) scene.

We travelled North, East, South and West. We hunted the majestic plains of the Karoo, the breath-taking mountains of the high ground, the savannah, and the coastal forests. In all we hunted 28 animals.
For the numbers guys. 28 Animals – 16 Different Species – Not all doubles. Our trackers skinned, processed and salted 20 full mounts and 8 shoulder mounts. 23 Bags of salt, that’s 2300 pounds of salt – 4 knives worn out. 5000 Kilometers between Jean and Carl without the slightest hitch from their Toyota’s. Best of all, every single measurable specie made it well into the SCI Record Book.
Will we take it on again? In a heartbeat! What a safari! What an adventure! What a trip it was!
Ps. Jose & Filo, next time let’s do it in 20 days and not 8.
For more information and current updates about John X Safaris; follow us on Twitter, connect with us on Facebook and visit our web site!