Spanish friends on the hunt for fun…..

Gustavo Ruiz and Andres Caballero joined Professional Hunter, Gary Phillips and assistant, Jose Hernandez, this past August for a 10 day plains game safari to the Eastern Cape.
Neither men had ever visited the Eastern Cape and had certainly never hunted any of the terrain or variety of species that the East Cape has to offer. Gustavo was set to do most of the hunting, while Andres was along for the experience. Andres, later did join in on the action and bagged a few good trophies too.
The hunters spent their first night of their hunt in the south. The following day they travelled north to our Eastern Mountainous Area, but not before stopping off for Warthog hunting along the way. 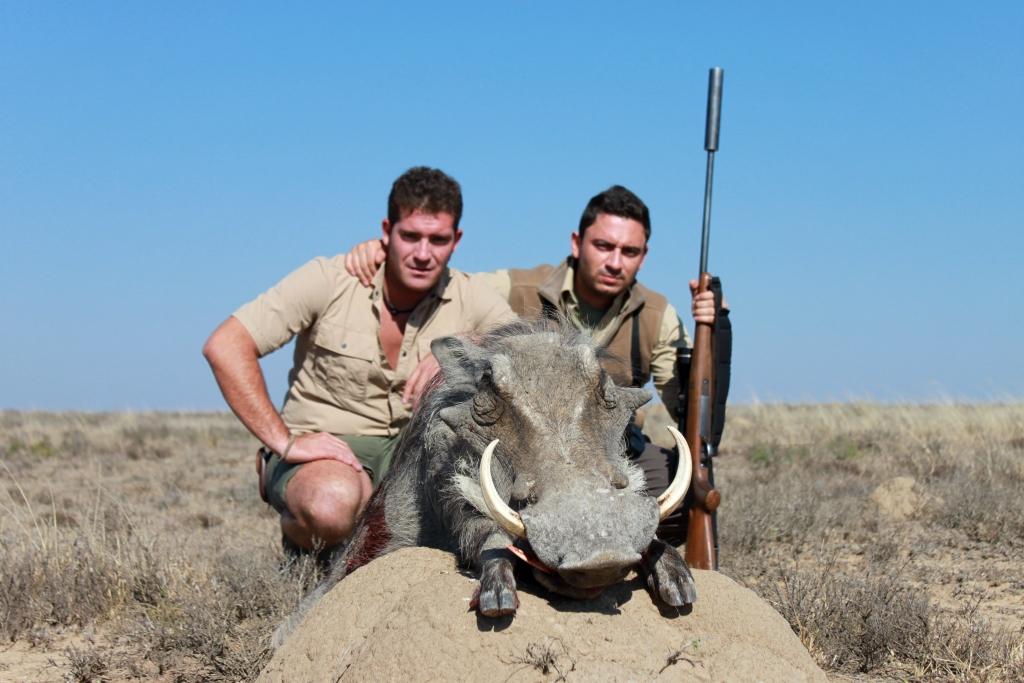 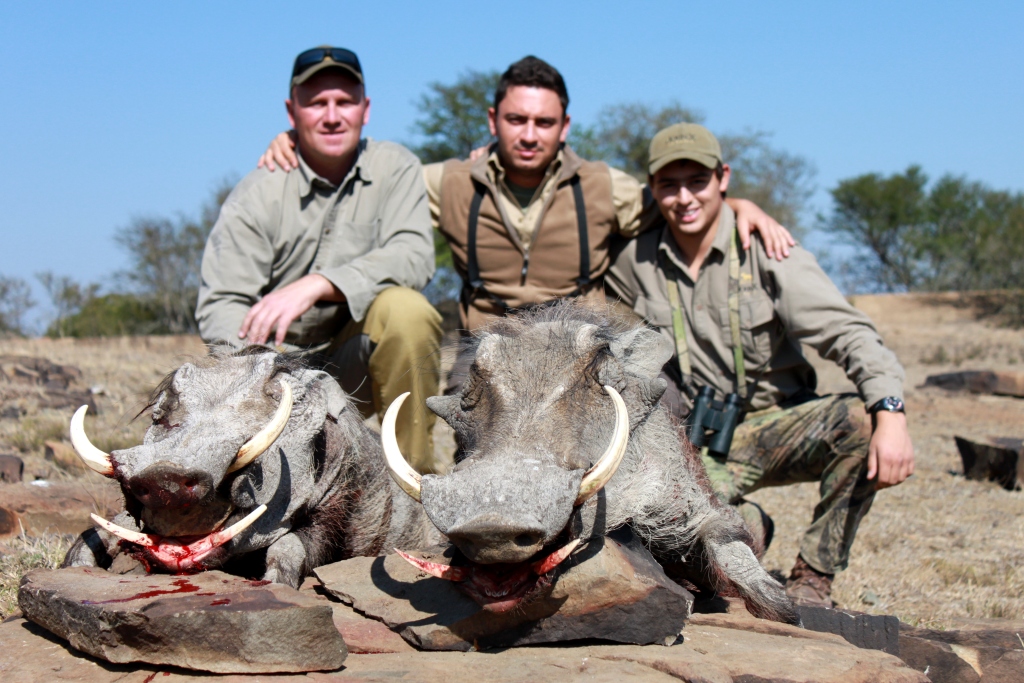 August was a dry month and the Warthogs were concentrating around the waterholes. It wasn’t long and we were battling to wipe the grin off our Spanish friends faces. This was as good as it could possibly get for them.

Having arrived in the north after the previous days excitement and enjoyed a warm cooked dinner with a few beers, the hunters woke to a crisp Winterberg morning. The game was plentiful and the guys had come to hunt. Gemsbuck, Cape Hartebeest, Springbuck, Impala, Blue Wildebeest, Mountain Reedbuck and much more… 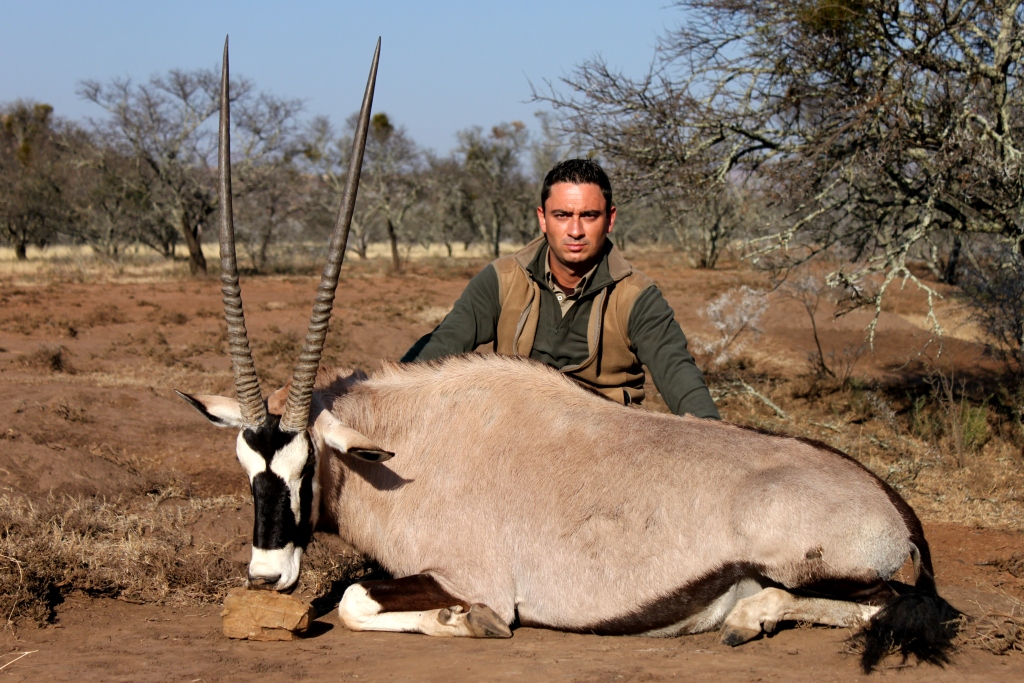 Gustavo got lucky with this old Gemsbuck bull that first day in the north, but not before having put in a good few hours of stalking. Certainly an impressive bull, one I’d like to hang on my wall.

The next few days were spent hunting the mountains for wary Mountain Reedbuck and crawling along dried up river beds for Cape Springbuck. 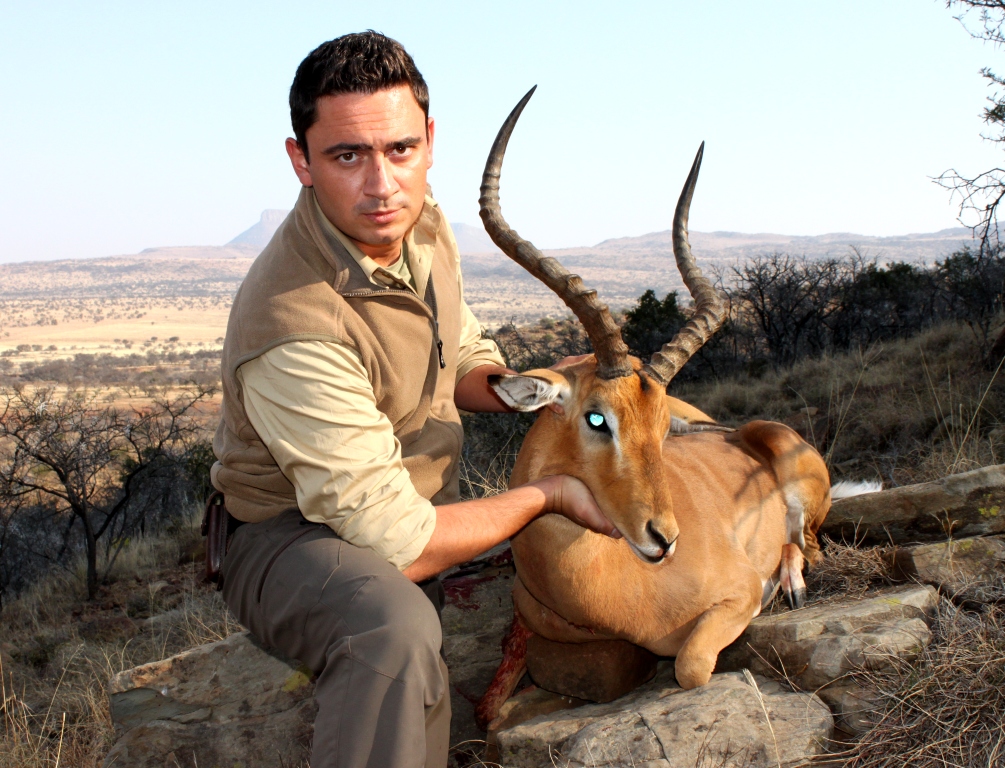 On one of their stalks the hunters came across a group of bachelor Impala rams. They picked out a good male and Gustavo made a great shot.

Having spent a few days in the north the guys were ready to get back to the warmer coastal climate. It was only day five and they had done so much already. There was more to come.

Back on the coast and the hunt was on for Cape Bushbuck, Caracal with hounds, East Cape Kudu, Zebra and the all important Cape Eland. Of all the species available, the Eland was the one that captured both mens imagination the most. 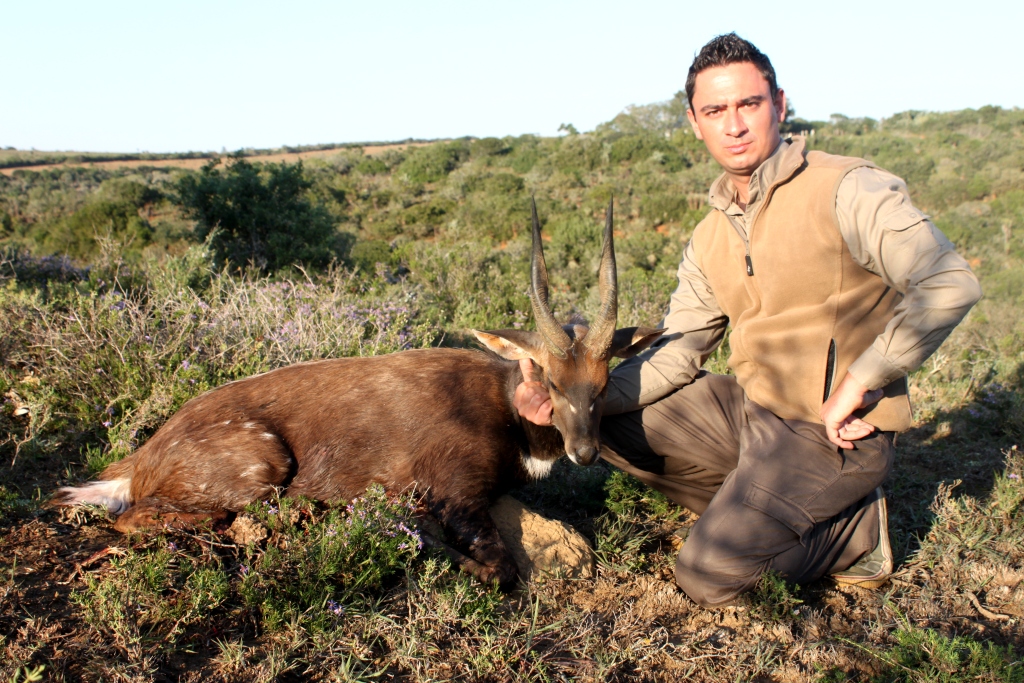 Cape Bushbuck is a highly sort after trophy and certainly one that makes one gain respect for the specie. It may not come across as aggressive due to its shy behaviour, but never approach a wounded ram in thick cover without all your senses on high alert. Many a Jack Russel have fought their last fight with these fleet-footed masters of the forest. 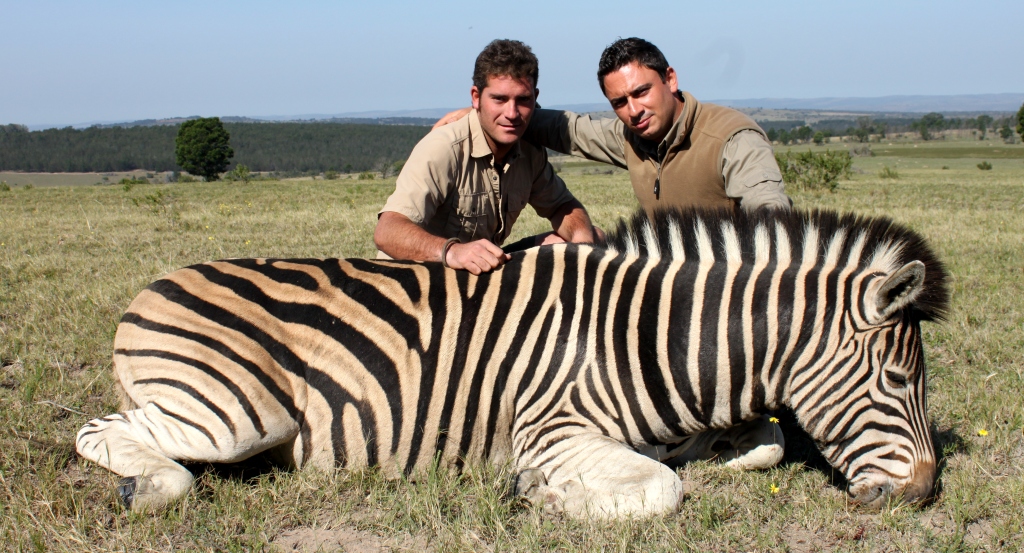 No trip to Africa would be complete without a Zebra. Andres and Gustavo with a super stallion. 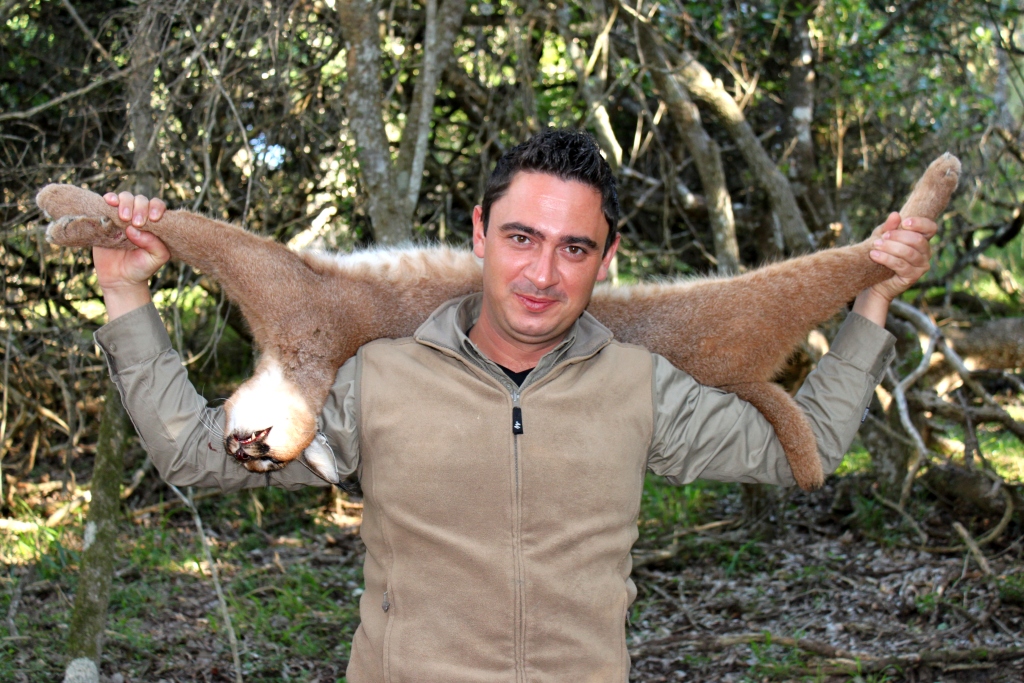 Conditions were dry and the hounds were battling to pick up any scent of Lynx. When they finally did, they lost the cat more often than not and at times we all lost confidence in us getting a Lynx to tree. When our luck turned four days later, it was a relieved crew and an extremely happy hunter. Great Lynx!

After the success of the Lynx it was time for Andres to join in on the action. He had been waiting patiently and now his turn had come. 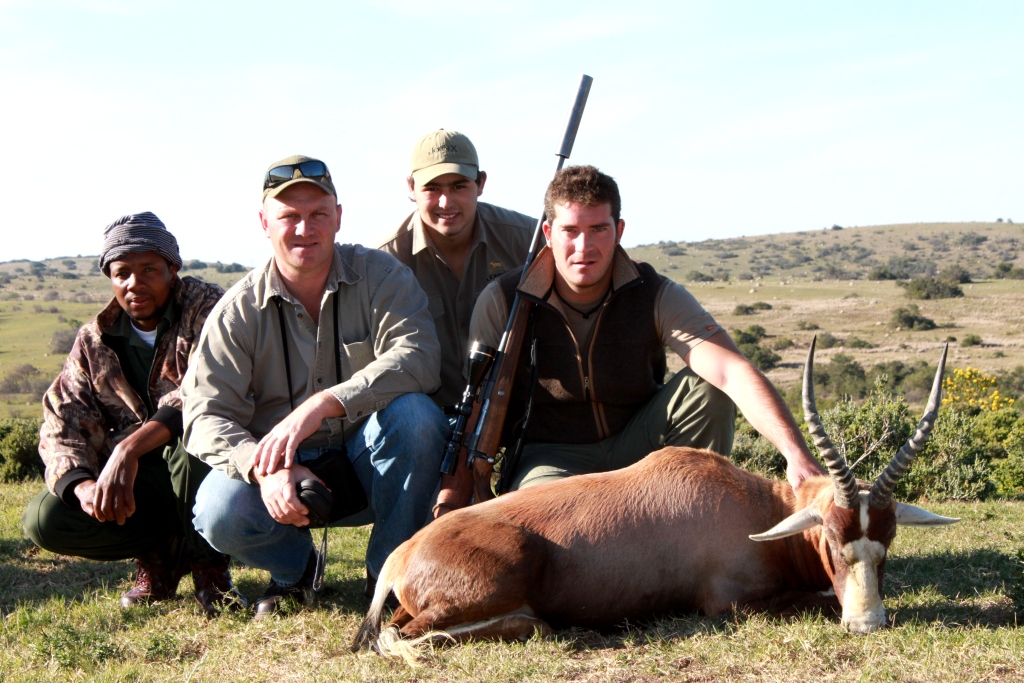 Andres took his time, made sure of his shot and squeezed off on this old Blesbuck ram. At the crack of the shot the ram dropped and the guys were ready to party the night away!

By luck there was a traditional rugby derby in Grahamstown between two rivals that dates back to over 100 years. Gary had attended one of the schools and invited the guys along. It turned out to be a party of note as many old school friends connect after years and share in the camaraderie of the old days. Gustavo and Andres were soon at home in the crowd and enjoyed themselves tremendously. A nice break from the hunt and a great way to celebrate their success. 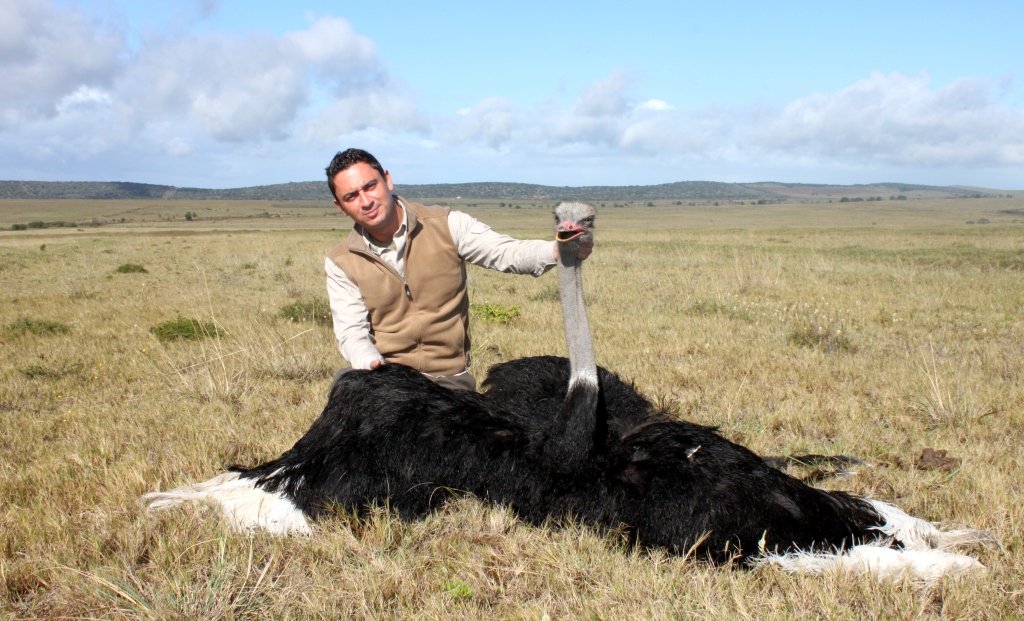 The following morning there was an anonymous decision of taking it easy. A few headaches were spotted on the horizon and the guys opted for a day of “African bird hunting” without shotguns!

The guys hunt was drawing to an end and the all important Cape Eland was still eluding the hunters. Gary was set on hunting a certain group of Eland. He had seen two great bulls in a particular area a few months prior and wasn’t about to give up due a spell of bad weather.Cold and windy conditions had pushed the Eland down into the coastal forests to take shelter. When the weather finally turned, it drew the Eland out onto the plains and Gustavo got the opportunity at a beast of an Eland. 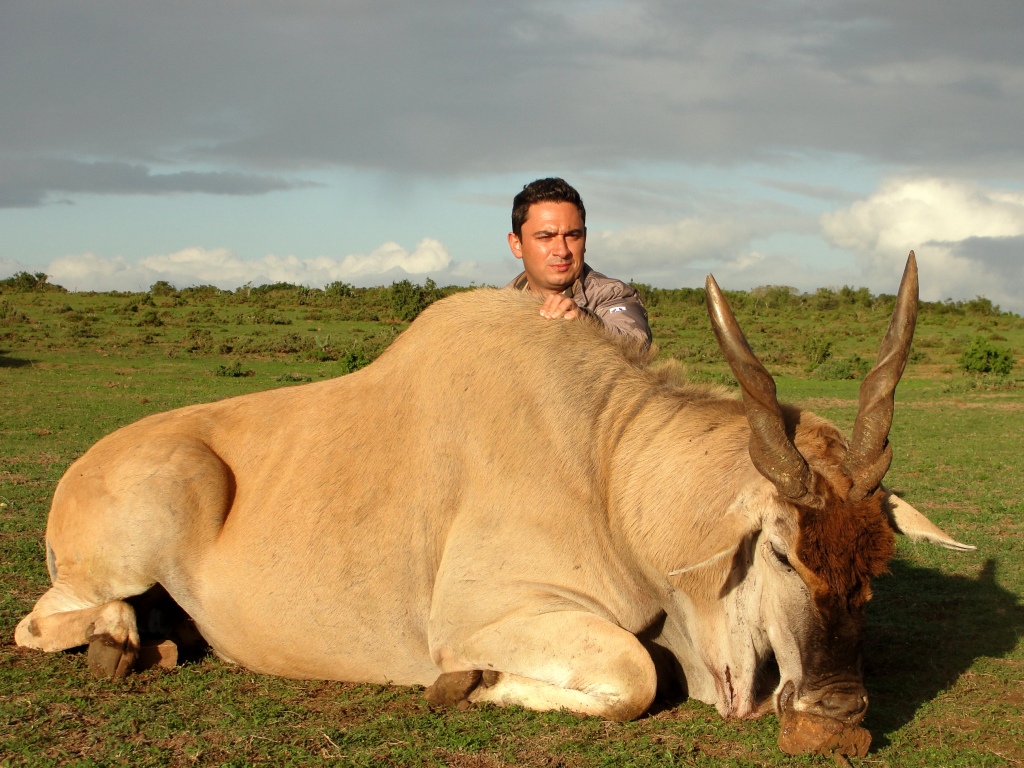 What more could one ask for? Gustavo’s Cape Eland was well over 12 years of age and boasted a navy blue dewlap that jolted its body into rhythm at every step. The tuft of main on the forehead was dark and plated, with horns brimmed down into blunt ivory daggers. 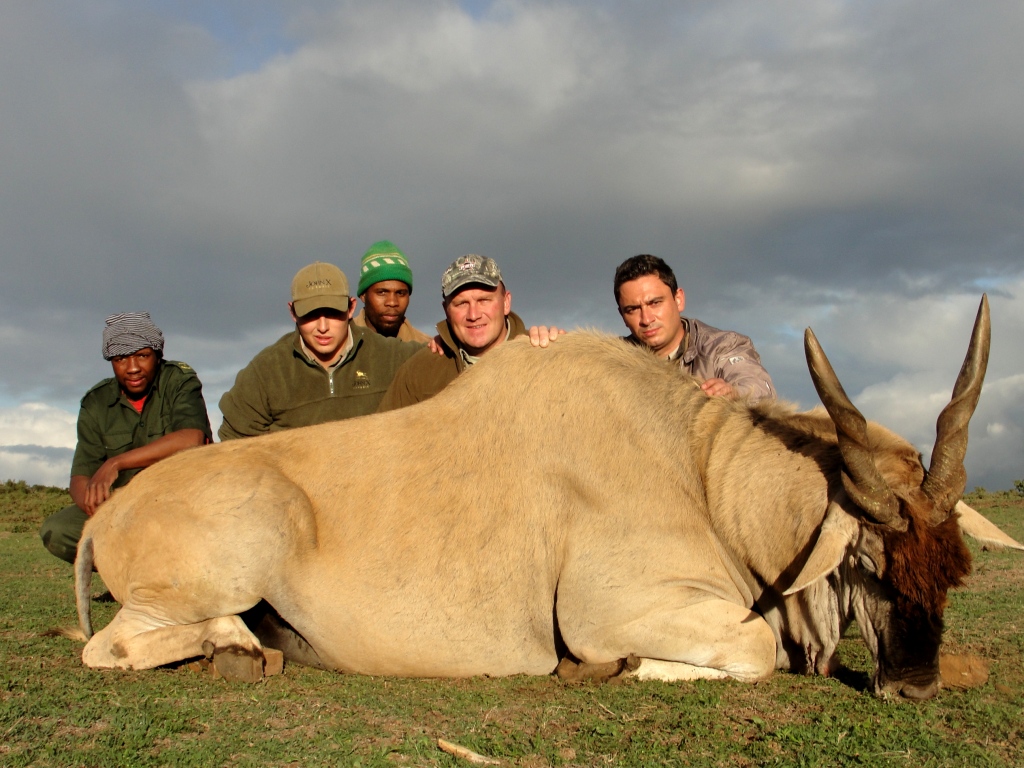 It had taken a group effort to achieve such an impressive trophy, let alone a hunt with so many good animals and enough experiences to last a lifetime.