It’s the modern Big 5 of Plains Game. In a world where everything is changing and high standards become the norm, so does the urge of our hunters.
Hunters from around the world are looking for new opportunities to test their skill and wit against the often forgotten “small” species of Africa. The funny thing about these “small” species and hunting them – they may be small in size but not in CHALLENGE.
Which species belong to the Tiny 10 and where does John X Safaris hunt them?
The Eastern Cape on South Africa’s east coast boasts a wide variety of terrain, habitat and opportunities, giving the hunter the chance at hunting 7 of the Tiny 10.

Our Coastal Area consists of grassland savannah and deep valleys filled with coastal forests running down to the Indian Ocean.

Up on the savannah you will find Oribi, Common Duiker and Cape Grysbuck, while Blue Duiker can be hunted in our Coastal forests. 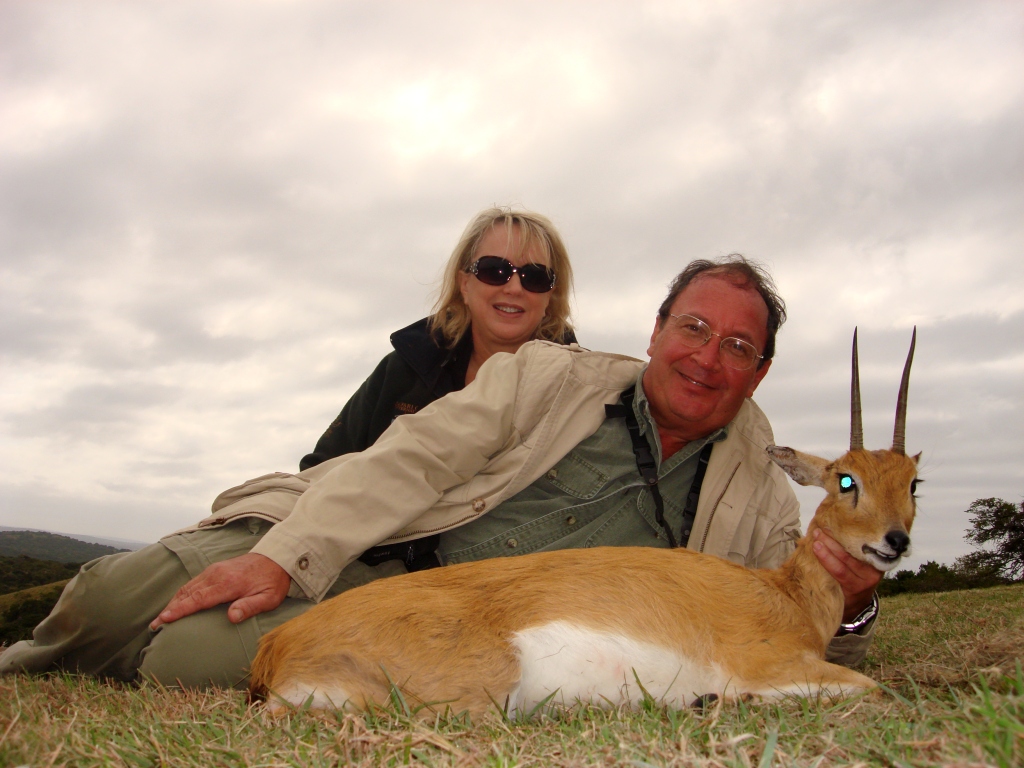 The Oribi is a magnificent trophy and a collector’s delight. Usually hunted along our coastal belt, but can also be hunted in Mozambique. Solids are recommended to minimize damage to these fragile trophies. The management of Oribi populations is of extreme importance if one were to maintain a sustainable population. Oribi succumb to predators very easily and areas with good Oribi populations are usually very well predator controlled. When hunting these shy animals always search for pairs or groups, as one is bound to find males not too far away from females. When judging the trophy quality always ensure the tip of the horns are in line with the top of the ears or greater. Any hunters wanting to hunt Oribi should indicate this when booking their safari, as Oribi quota is limited and permits have to be applied for well in advance. 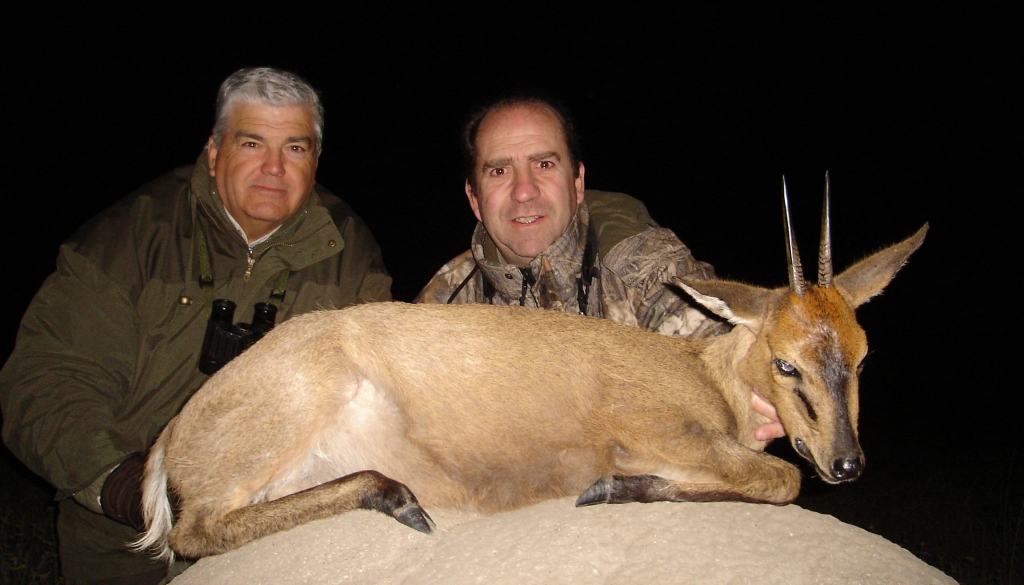 The Common or Grey Duiker is seen by many hunters as an opportunistic species. Duikers are usually hunted during the early morning, late afternoon or at night. 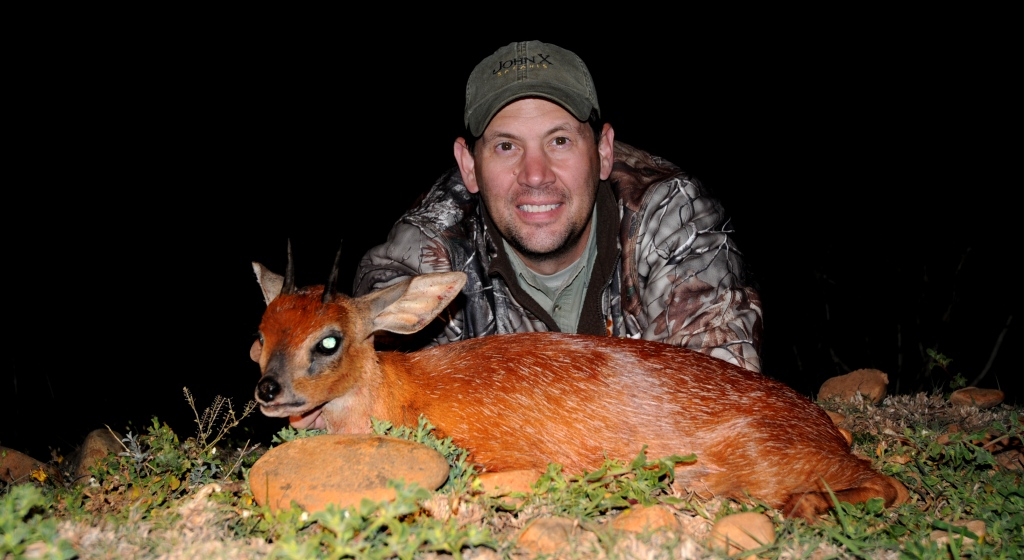 The Cape Grysbuck is a magnificent trophy and a personal favourite. Hunting Grysbuck will require many nights of hard hunting. When hunting these shy animals always search for pairs, as one is bound to find males not too far away from females. When judging the trophy quality, take your time, as it will usually be at night in tall grass. Grysbuck do not tend to stand still for very long with the outsides of their ears being black often resembling the shape and color of the horns. Be certain that there is at least 2 ½’’ of horns sticking out before making the call. 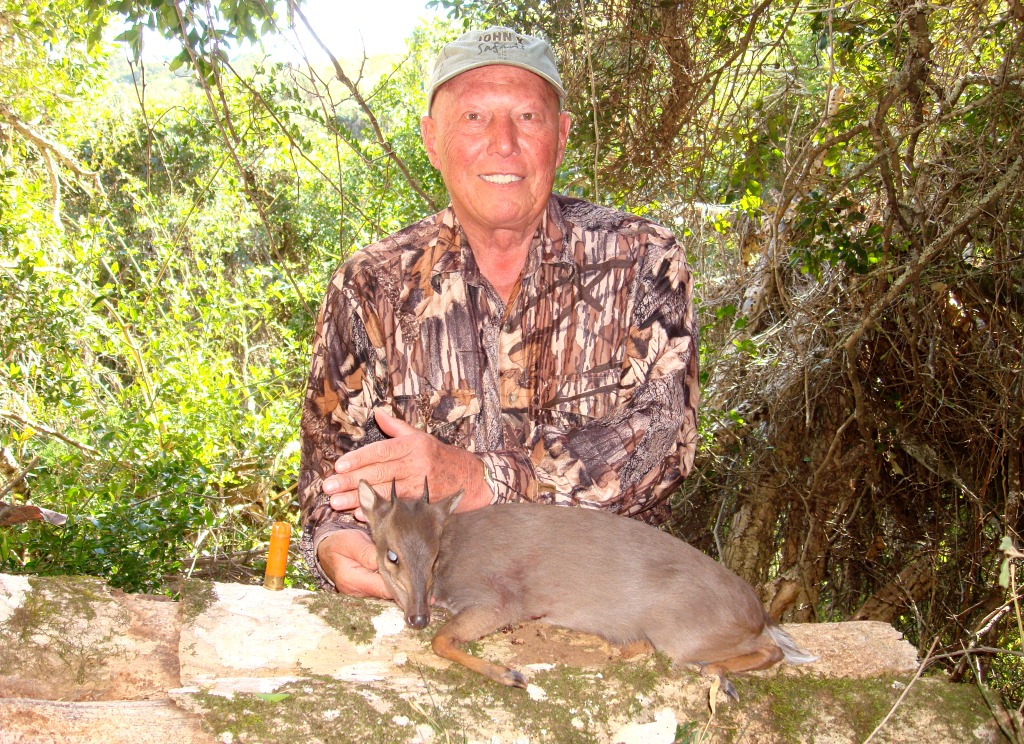 Also known as “Puti” in the Xhosa language, the Blue Duiker acts as the main source of prey to Caracal and Eagles alike along our Coastal Forest belts. Both males and females make for a super trophy. This is a real specialized collector’s hunt. Hunts are conducted by finding a suitable path in the forest, while moving the animals around by Jack Russell Terriers. A 12 gauge shotgun is best suited for these fleet-footed masters of the forest.

From the beaches to the mountains, the quest for variety of the Tiny 10 continues. 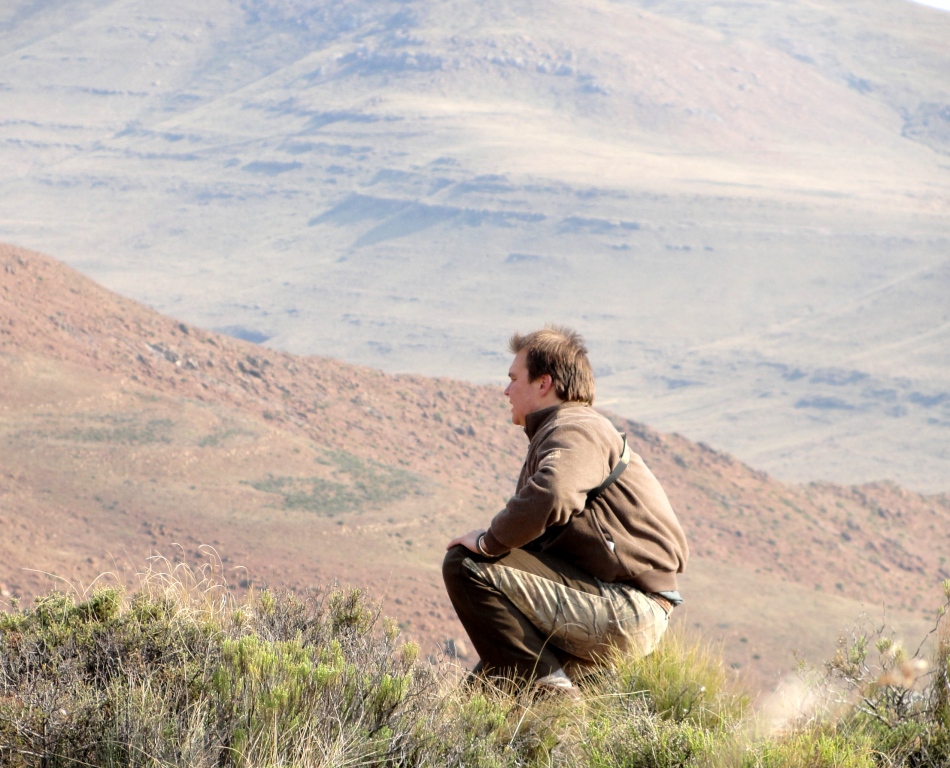 An amazing world awaits you when you get up and into the clouds….

Klipspringer and Vaal Rhebuck can be hunted on the high ground from our Northern Areas, and the ever-present Steenbuck can be found racing across the plains of the Karoo. 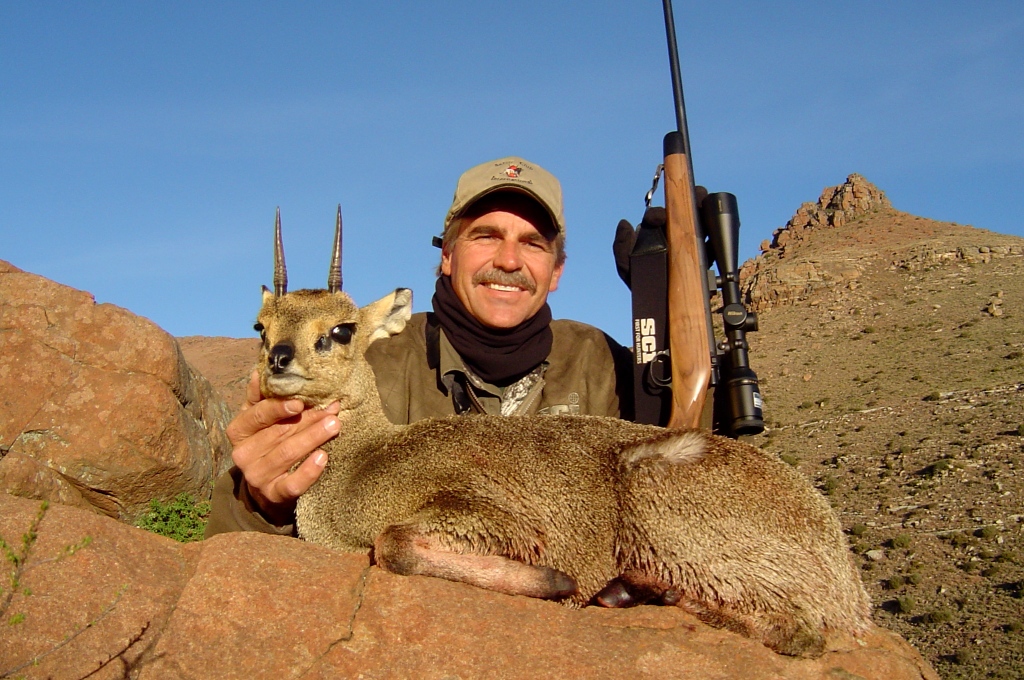 For any hunter who enjoys the mountains and the challenges that come with mountain hunting, they will find this hunt a must. The art in hunting these fleet-footed masters of the rocks is to get into glassing positions without being detected. Once in position, take your time to glass all surrounding rocky ridges and outcrops in the area. Once a good male has been spotted be sure to approach with utmost caution, as any kind of alarm will set the Klipspringer, usually in pairs, off over the next horizon. Hunters can expect shots to be long with steep gradients at times. Klipspringer’s have sensitive skins and hair slip is always a factor. Hunters must ensure they have a good flat shooting caliber with a solid bullet as to damage skins as little as possible. 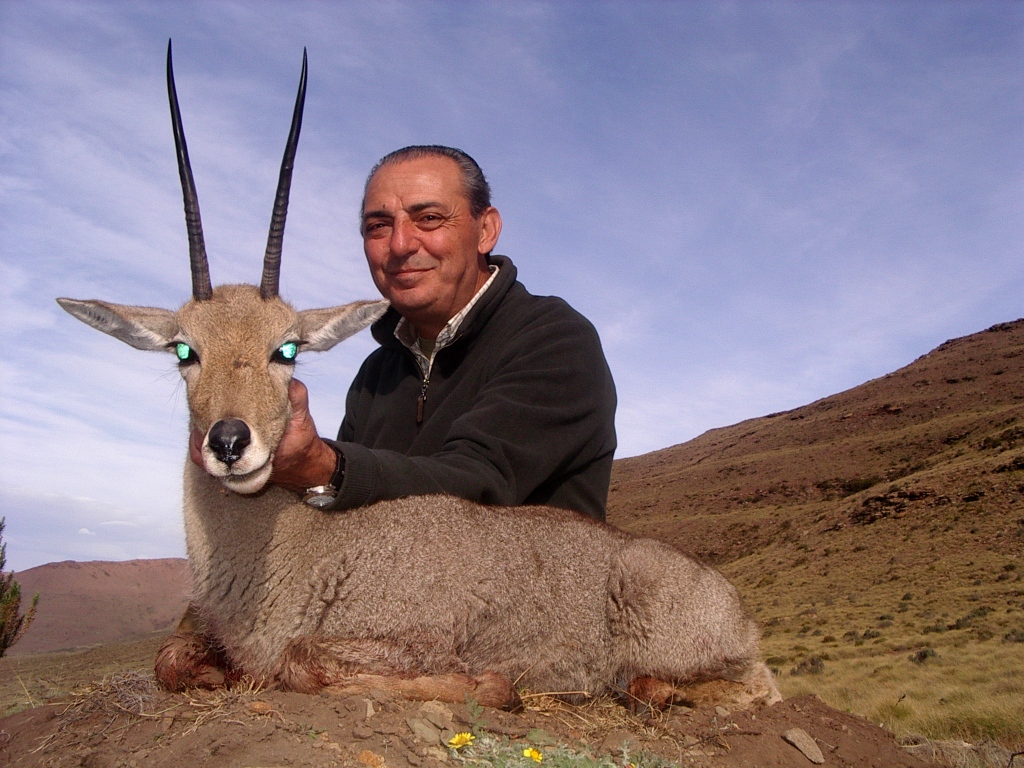 Vaal Rhebuck are considered by most as the most challenging South African antelope to hunt. This wonderful species occurs on the high ground. Hunters must be prepared to be patient, walk great distances, and at times make the above average long shot. Not all hunters have this species in their collection and many hunters have often expressed their disappointment of not having hunted this species in their younger years, when getting up and down mountains was much easier. The trophy quality of a Vaal Rhebuck is determined by the overall length of the horn. The best indicators are the ears which stand at a height of 6 inches when erected to attention, always look for something an inch or more above the ear. Hunting Vaal Rhebuck is a must to any hunter who wants to experience that much more, who relishes the hardship in the journey, and who enjoys the success of harvesting a good male, while sitting back and enjoying the view while you’re on top of the world. 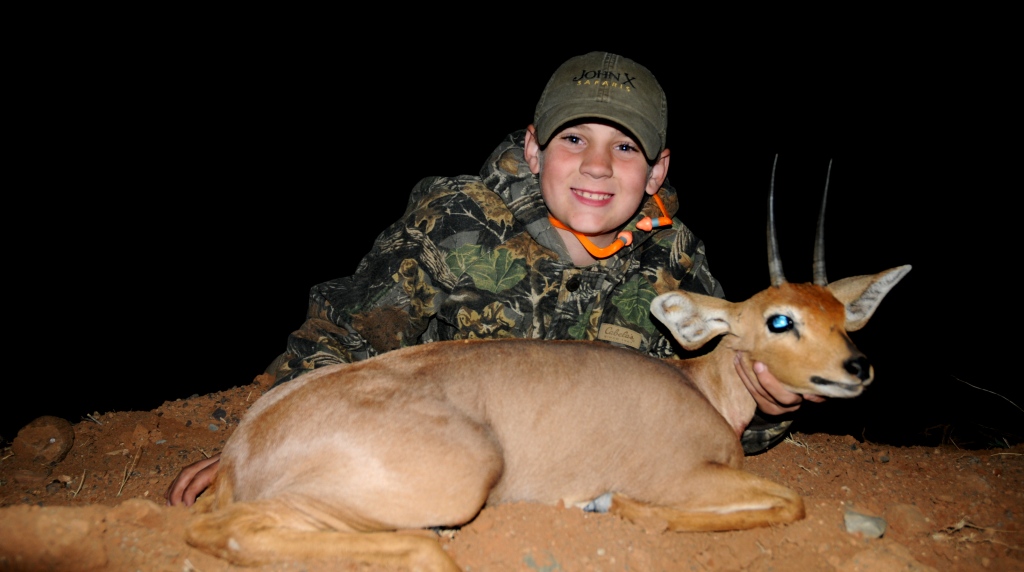 The Steenbuck is one of the most beautiful of the ten. A hugely underrated trophy. This is mainly due to its size or the fact that so few people notice them. Few have the time to study them before they disappear over the horizon or into the dead of night. The Steenbuck gets its name from the very first Dutch settlers who traveled to Africa. The word “Steen” means brick, as you could well imagine the color of the Steenbuck resembled that of a red building brick, and thereby getting the name Steenbuck.

While the East Cape boasts with 7 of the Tiny 10, the journey must continue onto Namibia where we hunt the Damara Dik Dik, and finally onto Mozambique to complete the slam. 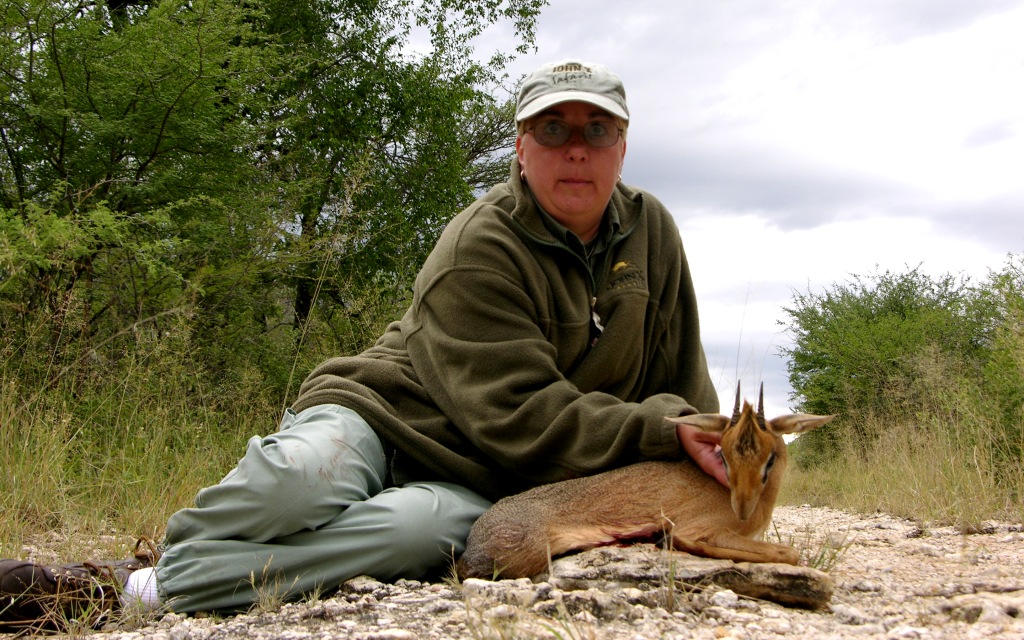 The magnificent Damara Dik Dik – The ballerina of the bush. Strangely the Damara Dik Dik is named after an area where it does not even occur, Damaraland, Namibia. Characterized by thin dainty legs and an elongated snout. A trophy one will be required to hunt hard for, but certainly one to savour.

Red Duiker can be found throughout the forests and savannah areas of Mozambique. Often spotted as a glowing ember in the forest, with its rich red colour moving swiftly over the shaded forest floor. The stockier of the 3 Duiker species in the Tiny 10, and surprisingly difficult to judge the difference in sex. Apart from heavier set horns and head, look for an oversized scrotum hanging between the back legs often stretching to below the knee line. 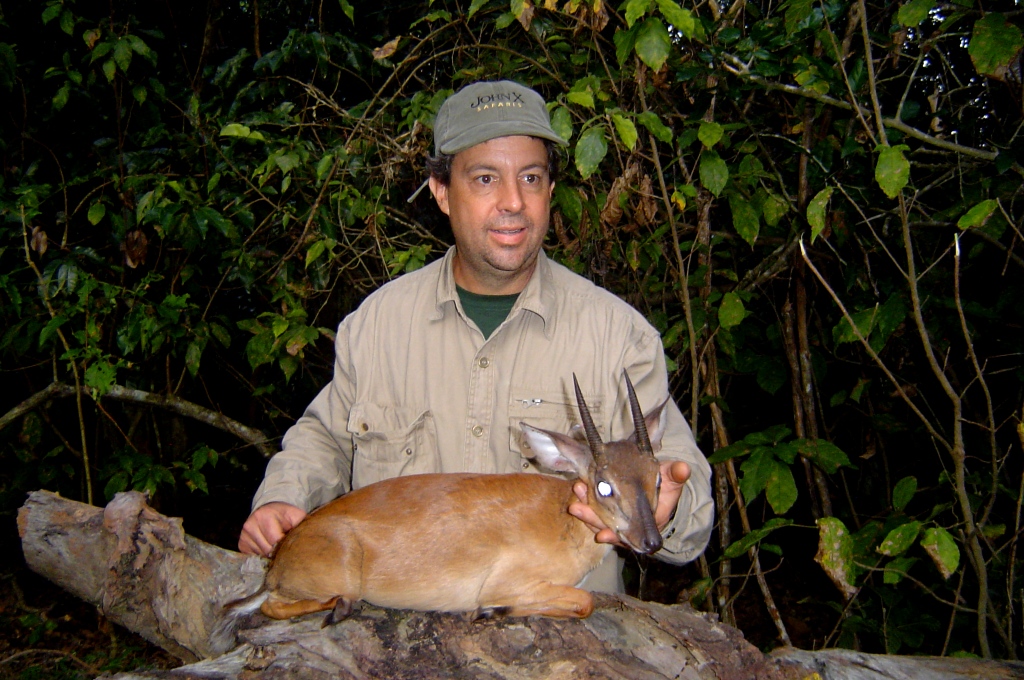 Last but certainly not least, the tiny Livingstone’s Suni. Considered by many the most difficult to hunt of the 10 and will often be the last remaining species outstanding in many Tiny 10 collections. This may have been the feeling in the past. Today we are privileged to hunt the finest Suni area in Africa. Mozambique’s Zambezi Delta with its scattered sand forest boasts unbelievable numbers of Suni. Many a hunter whom we’ve guided to this area has been as dumb founded as what we were the very first time. These tiny animals live in a special place and can be considered a highlight in any hunters hunting career.

The Tiny 10 – What’s the BIG fuss about?
It may be the fact that they’re not always noticed or known. They’re certainly not found everywhere and those who start pursuing them usually become addicted to hunting them. I’m not entirely sure what it is that has got me addicted?
Best you ask the rest of those Tiny 10 addicts out there and join us on the hunt for something different…..
For further details regards hunting the Tiny 10, visit our John X Safaris Website @ www.johnxsafaris.co.za or drop us a mail on hunting@johnxsafaris.co.za . We’ll be glad to assist with your addiction.
OR
For more information and current updates about John X Safaris; follow us on Twitter, connect with us on Facebook and visit our web site! 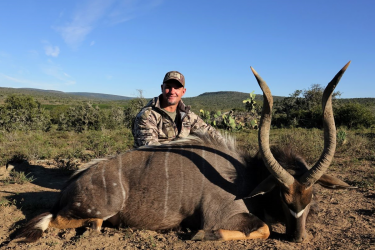