A bird in the hand beats two in the bush….

Now that I come to think of it, this story really began a long time ago.
Depending on the time of day (or night) and whose doing the telling, the story may vary in fact and to some degree in fiction.
“It was a fine Eastern Cape morning. There was a steady breeze blowing from the west and the trees had started turning autumn brights – winter was clearly on the way. Professional Hunters, Ed Wilson and Carl van Zijl, together with long time hunting buddies, Jeff Edland and Brett Nelson, were on the hunt for Waterbuck. During midmorning, while rounding a bend the hunters stumbled into very impressive Waterbuck bull, there was a joint decision to let the bull pass, after all it was early, and who knows what else the day may bring?”
Up until this point there seems to be a common understanding of fact. The mistake we made by passing up this great bull is where the fiction causes some kind of debate. Like the saying goes: ”A bird in the hand beats two in the bush!” And how we have come to regret that little saying!
“That evening around the bar enjoying the African sunset, mention was made of a particularly impressive Waterbuck bull that was spotted that morning. Professional Hunter, Gary Phillips, not one to see an opportunity pass him by, picked up on this rare piece of information and went straight to the same area the very next morning. 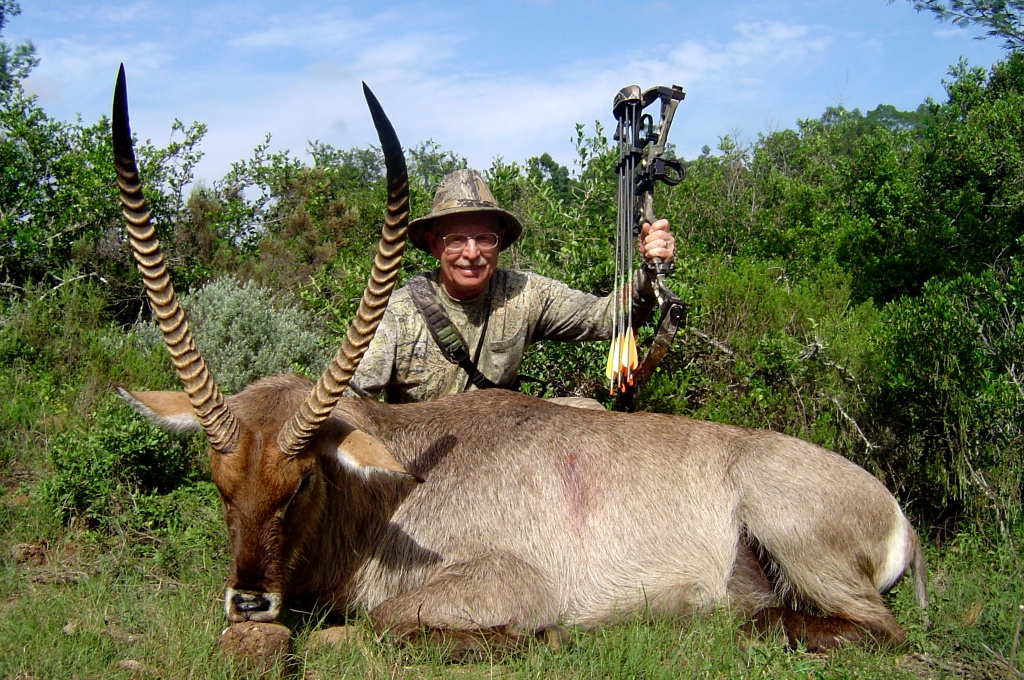 To cut a long story short. The rest is history. Our old friend, Jim Hasselberger, not only went on to hunt the Waterbuck of a lifetime, but started a competition that may last a lifetime!

It was therefore no surprise that Jim would be back this year, joining Brett Nelson on his annual hunt to John X Safaris. Afterall, we were out to beat his trophy of a lifetime, a 31″ Waterbuck with the bow.
On this hunt Jim joined Professional Hunter, Juan MacDonald, once again targeting a number of species with his bow. Our coastal area had experienced extremely good rains during the first quarter of the year, making food plentiful and bow hunting difficult. With so many factors counting against us, we decided to relocate Jim’s hunt and opted for an area further north, away from the coast.

Our area in the north had enjoyed its fair share of rain too, but the game was still showing interest and were willing to come into the hides. 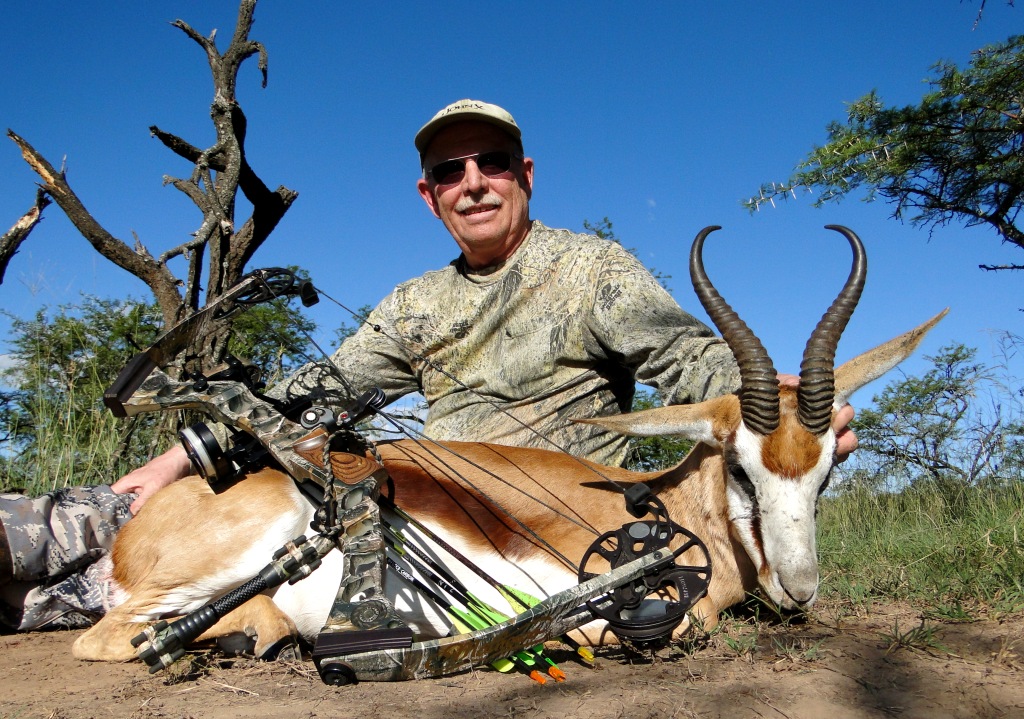 Jim and Juan decided to break their journey traveling North and stopped off at one of our bow only areas along the way, harvesting this great Cape Springbuck. A good start and certainly one to settle the nerves.

Arriving in the North the guys immediately knew their hunt was going to be a great one. The accommodations were superb and the game was plentiful. 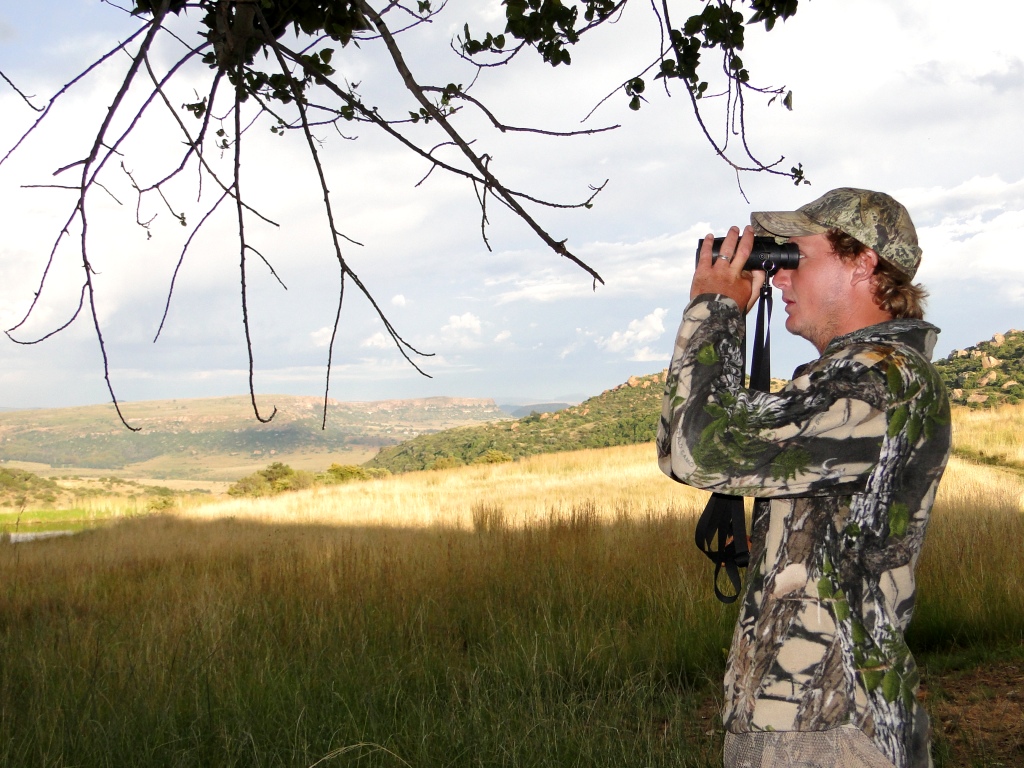 Early mornings were spent glassing for game and dedicating time to walking and stalking on a variety of species.

Some magnificent trophies were spotted on these early morning hunts. Getting Jim into range would be the challenge. 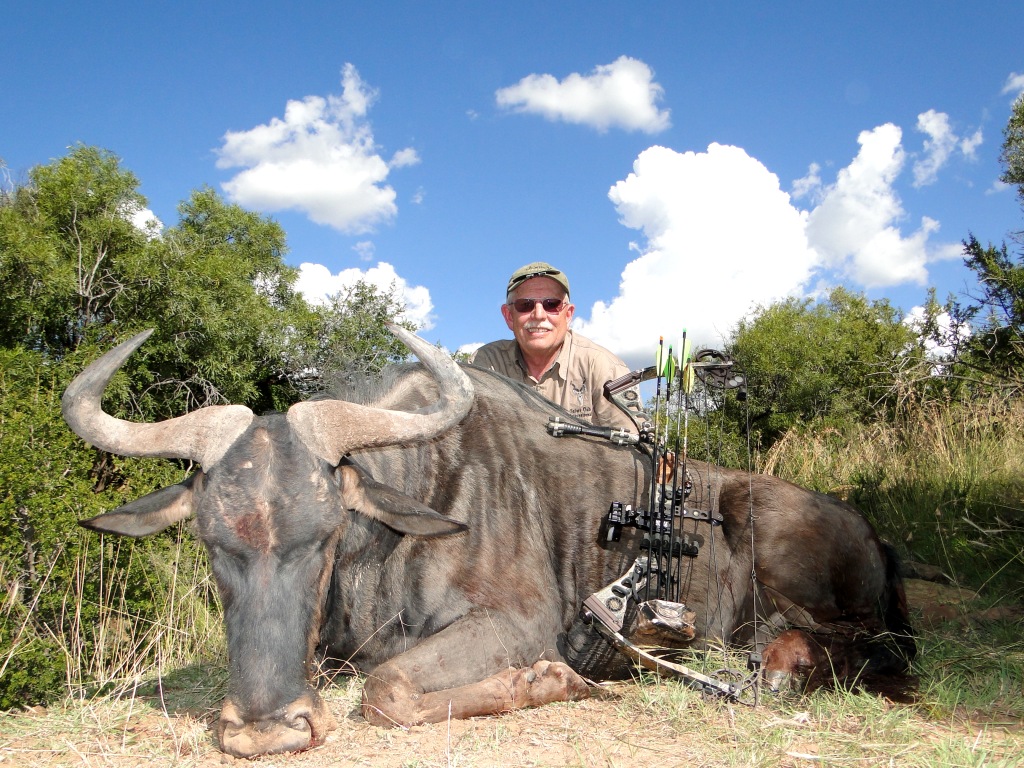 While early mornings were filled with numerous spot and stalks, the afternoons would prove most successful sitting in hides over water and salt. 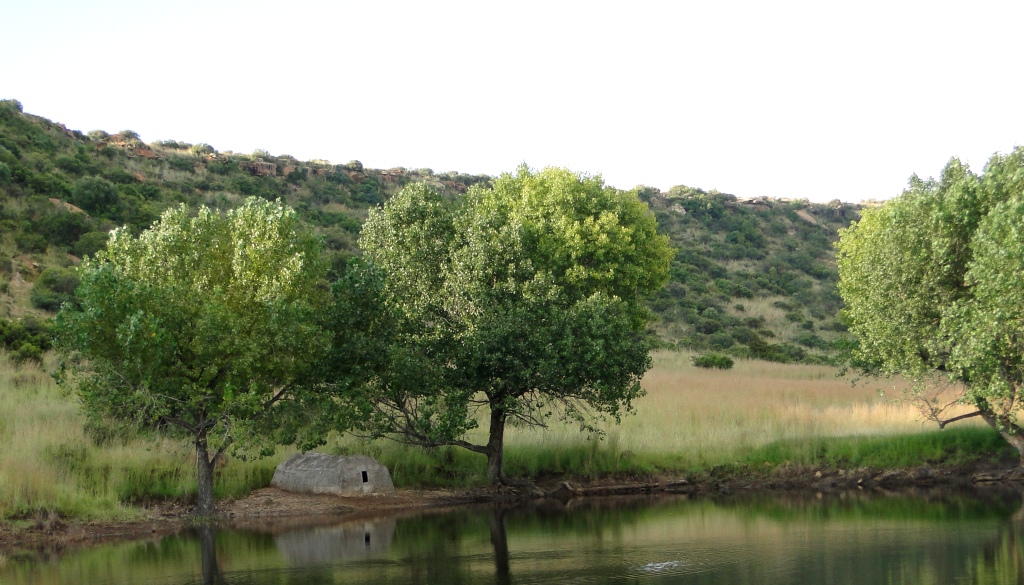 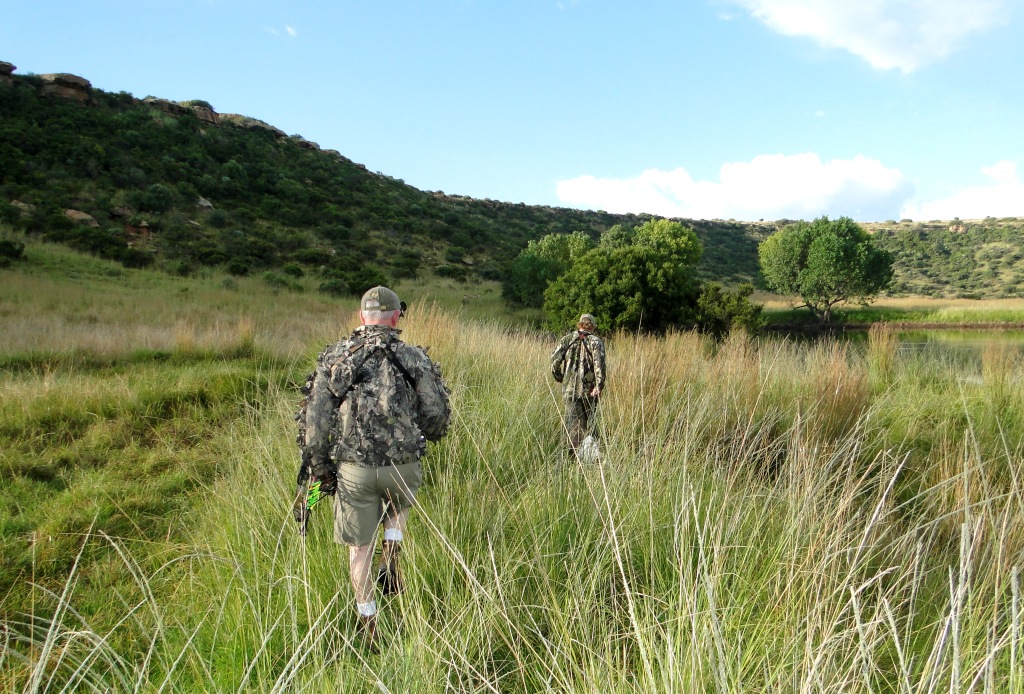 The guys would carefully approach the hides during the hottest time of the day and sit it out for the afternoon. Hoping and waiting in anticipation….

As luck would have it, Jim finally got his long-awaited Kudu. Patience proved to be the winner on this occasion. 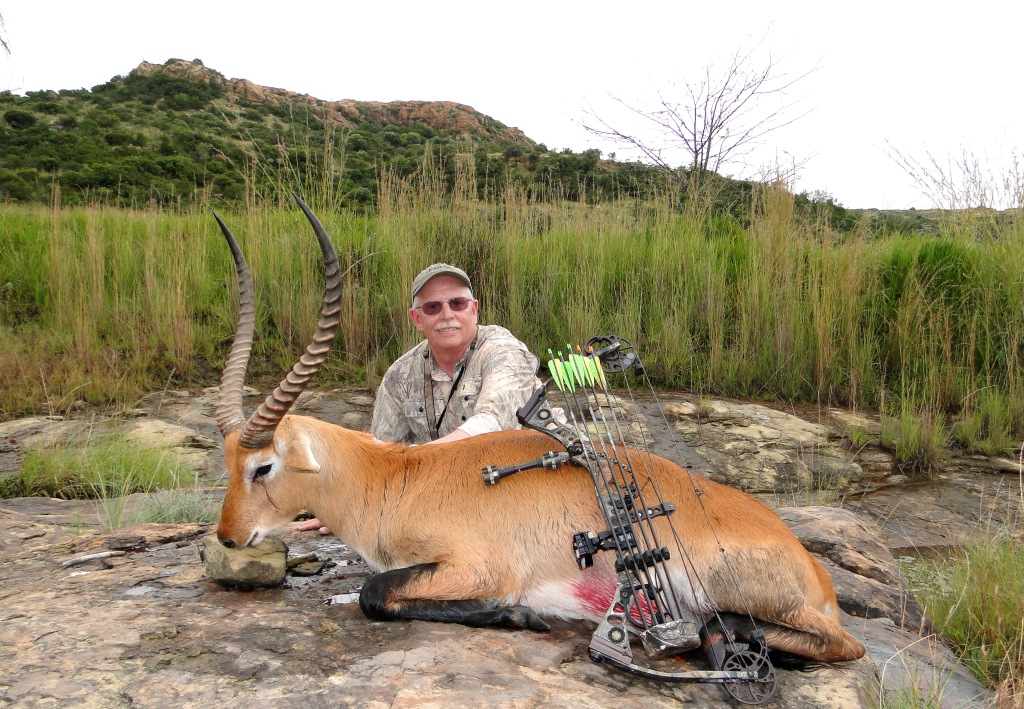 A Lechwe was never mentioned or had even come to mind when Jim first booked his hunt. That’s the beauty about hunting in Africa, opportunities arise at any given moment. Take your chances as they come. Jim certainly did with this super Lechwe bull!

Nyala could probably be considered as one of the most majestic species in Africa. The females with their bright red skins split by definite white stripes, and the bulls so amazingly different with their long hair and blackened grey coats. Jim’s priority was Kudu and Gemsbuck, but Nyala was always in the back of his mind. 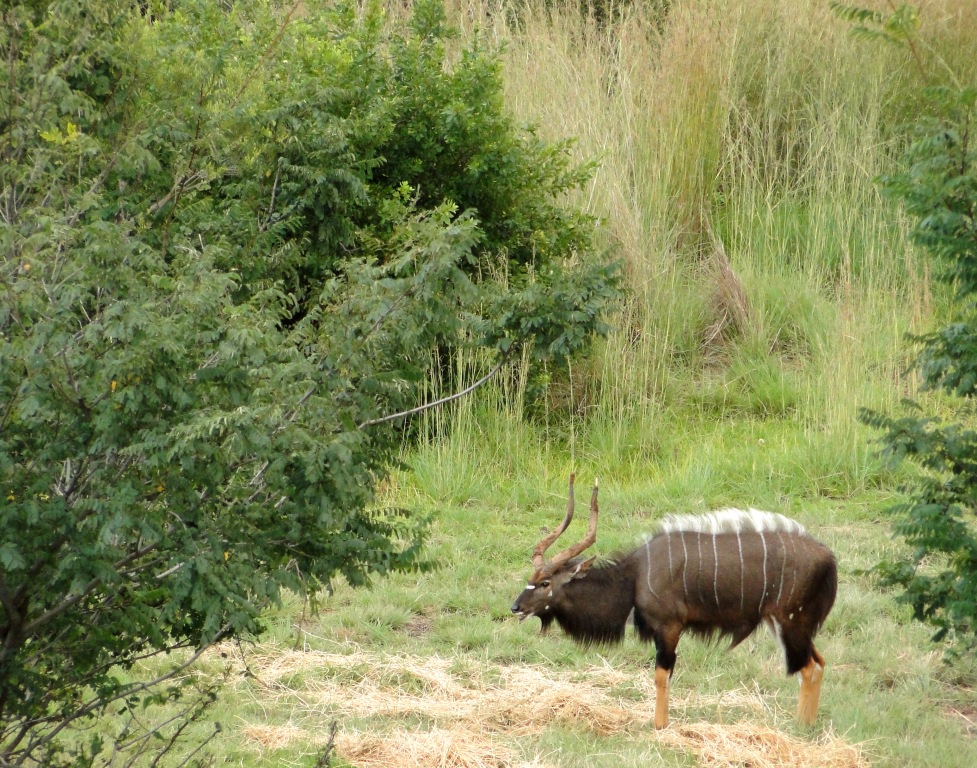 He had been watching a number of Nyala coming into the hides on a daily basis. There was however one particular bull that the hunters had spotted which had stolen Jims heart. 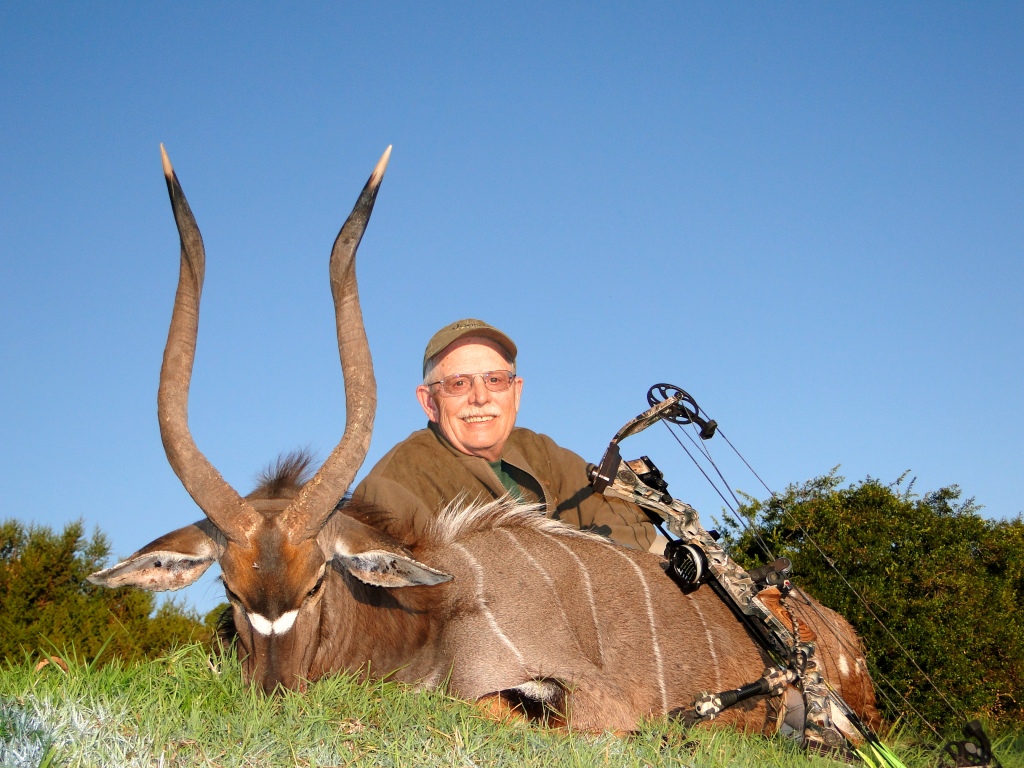 And what a Nyala it turned out to be! Could this be deja vu? The Nyala of a lifetime.

Jim took the honours on that first hunt with his Waterbuck and this time certainly took the top Nyala. Personally I can’t make the call on who the winner might be.

What I can say: “A bird in the hand beats two in the bush.” And maybe this time we’ve made the right call and matched Jim’s luck. For that you’ll have to wait and make the call yourself….. Brett and Jeff weren’t letting any opportunities pass them by!