Over the years we’ve tried to develop John X Safaris into more than just a first timers hunting destination. By not only placing the emphasis on hunting, but by looking at the entire safari experience, we hope to achieve the above average South African safari. It thus goes without saying that this has allowed our second and third time hunters a chance at our abundant hunting variety, but has opened up a world of opportunity for the first time hunter to John X Safaris.
Late March saw just the kind of safari we’ve been wanting to achieve. Josh Wilde, and his mom, Anne Wilde, joined Professional Hunter, Schalk De Villiers, on their first hunt to South Africa. Neither Josh nor Anne were your regular first timers to South Africa. Josh for one was a bow hunter, a great guy and brilliant shot, while Anne was an adventure junkie of note!
Josh was after a variety of Plains Game species with the bow, and Anne was set on doing a few days of hunting with Josh. She would then travel down to Cape Town with Free Walker Adventure Tours for a trip filled with fun and adventure.
Having arrived a day early, to allow for a day of R&R, it was soon decided that there was just too much to do and see. An entire day set aside for R&R was way to much for these excited hunters! After a mid morning brunch the hunters set off for the range. Josh checked his bow and Anne came to grips with Schalk’s rifle. A couple of hours later and the hunt was on for the elusive East Cape Kudu. 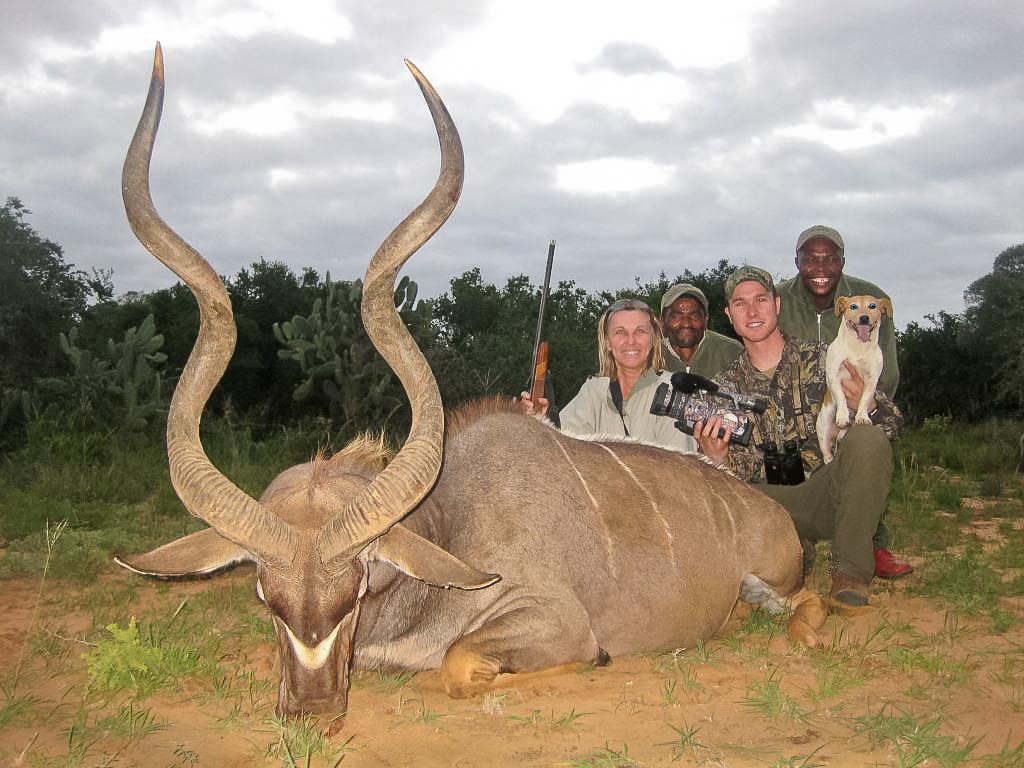 During the late afternoon on that first day, the hunters spotted a big Kudu bull. The Kudu was feeding in a tough area and the stalk would have to be a good one if a shot was to be presented. The guys leading from the front with Anne close behind got into a great position and Anne made the shot off the sticks. At the crack of the rifle, the bull jumped into the air, kicked out its legs and flashed its tail. A sign of a well placed shot. Russell, the Jack Russel was called into action immediately, the bull had disappeared into the thick Coastal Forest. Minutes later and the action took a frantic turn as Russel started his battle with Anne’s bull. Schalk and Anne slowly approached the barking Russel where he had bayed the bull. Anne took her time and squeezed of a great finishing shot, earning her our first 50+” East Cape Kudu for the season! 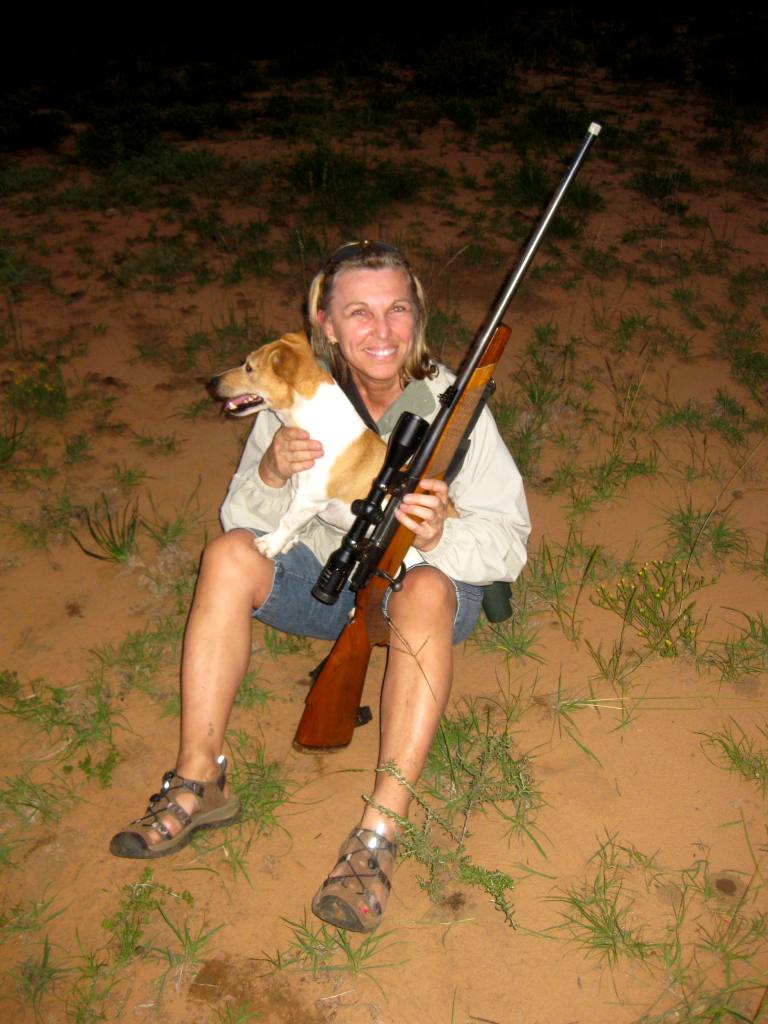 With a setting sun and the guys having to chop a road to retrieve Anne’s Kudu, it was fitting that the two stars of the show could be found sharing an excited moment together. After all it’s not everyday that one has the luck of hunting a 50? East Cape Kudu on your first afternoon in Africa!

Trying to get Anne to come down off her Kudu high was completely impossible, let alone worth it. Her smile was spread from ear to ear – ALL DAY LONG! What it did do was place some serious pressure on Schalk to produce a Fallow Deer that would not only rival Anne’s Kudu in trophy quality, but her overall experience of the hunt. 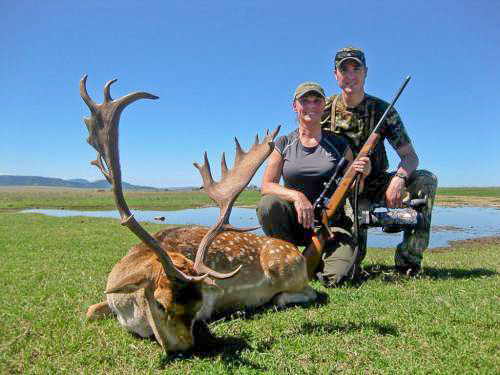 Schalk not being one to shy away from a challenge, came up with the goods once again. A great Fallow Deer to wish Anne farewell on her trip to Cape Town.

It goes without saying that a successful bow hunt takes a lot of luck. Very good hunting areas with above average number of animals, and a bow hunter who can handle his bow better than most. To compliment it all – A like-minded PH who’s willing to go the extra mile will always combine these factors and lead a successful safari. 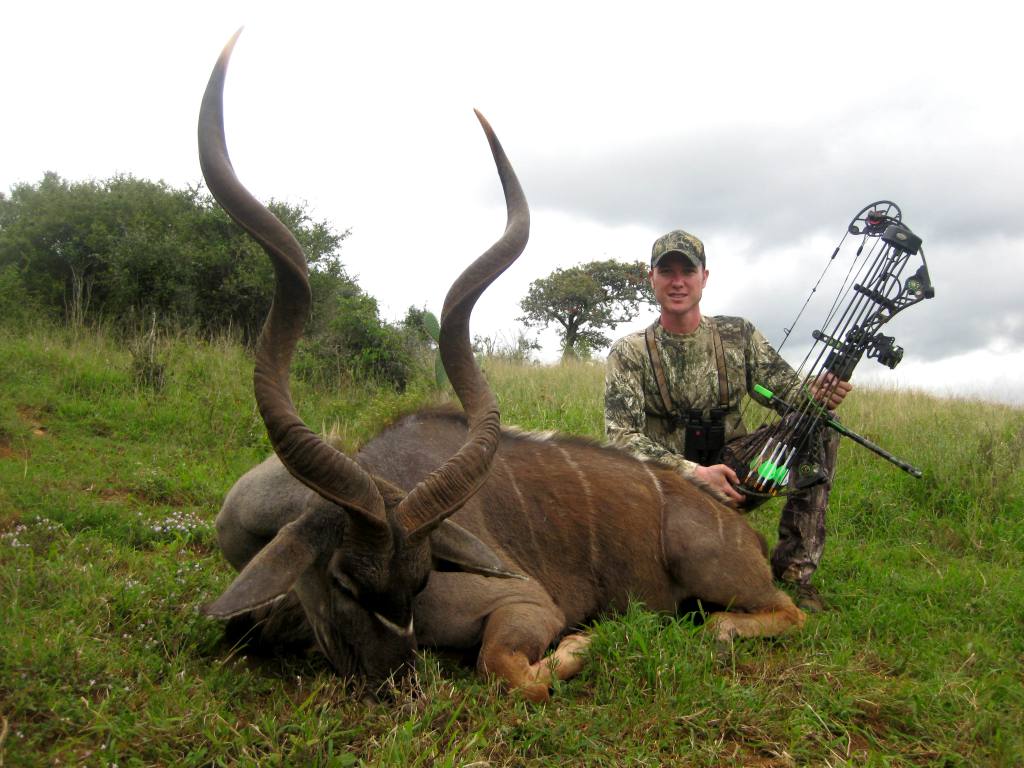 Right from the start, Schalk and Josh had hit it off extremely well. Both were gung-ho Bow Hunters with a passion to hunt. Josh taking his Kudu at 29 yards, walking and stalking, bonded these two hunters for life! 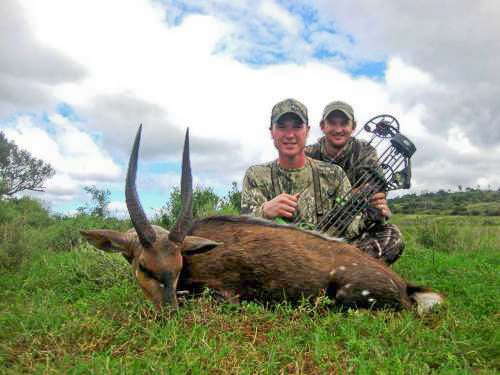 A couple of hours later, with Josh’s Kudu barely in the salt, the guys were at it again. Having spotted a good Cape Bushbuck ram feeding along the river, a stalk was started. A tick infested leopard crawl with enough thorns and spikes to last a lifetime, and Josh was within range. He came to his knees, drew slowly and let his arrow fly. The Bushbuck literally didn’t move and dropped right there in its tracks. The guys were on a high and on a roll! 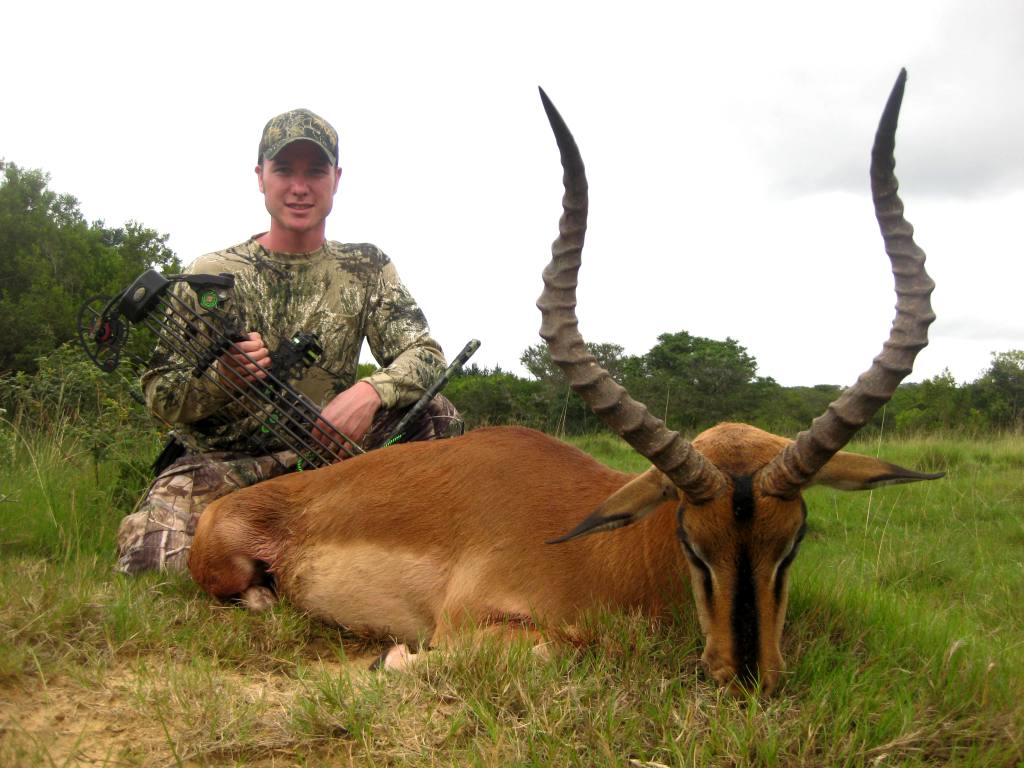 An Impala is the one animal that jumps string more than any other African game when it comes to bow hunting. After spotting this extremely “different” looking Impala, with his black face, very similar to the Black Faced Impala, Josh wanted to be sure of his shot. The guys took their time with the stalk and at the right moment, when the Impala dropped his guard, Josh let him have it. Another one shot kill and Josh was a happy man!

In the meantime, while Josh was enjoying unbelievable success with his bow, Anne was having the time of her life with Free Walker Adventures! 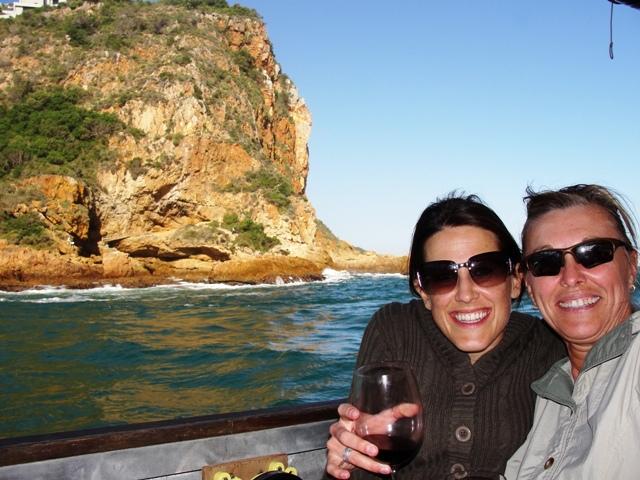 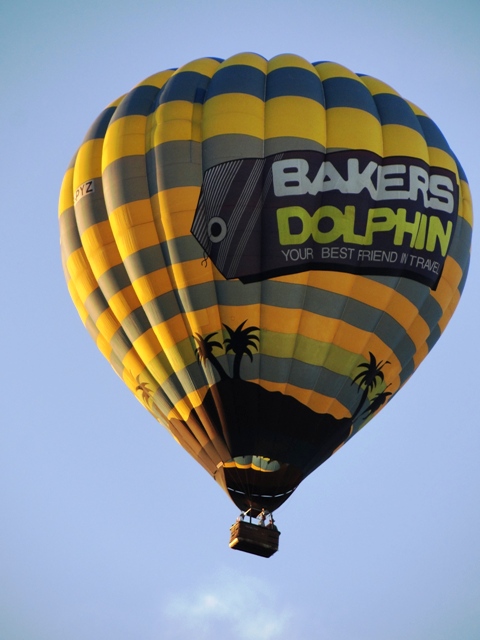 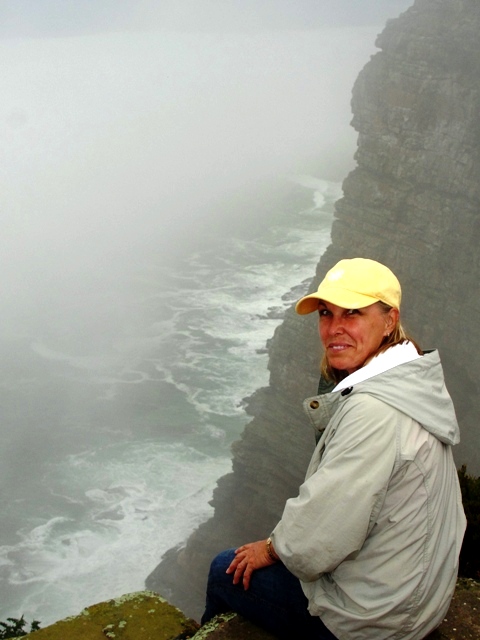 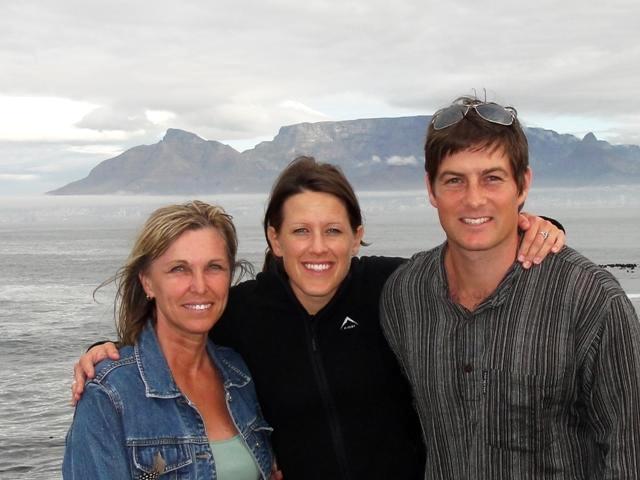 Admiring Table Mountain across the bay… 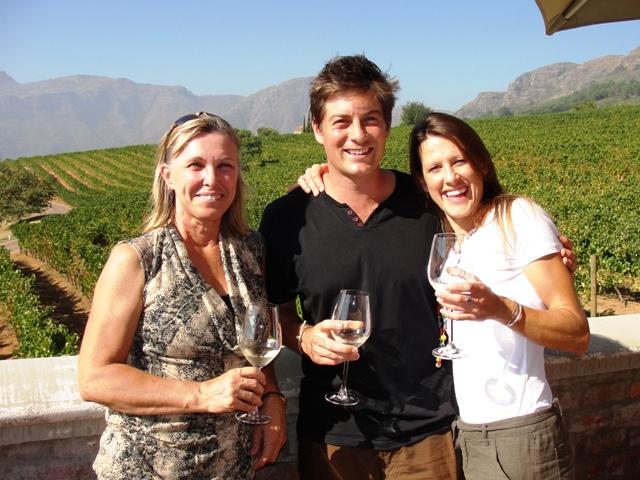 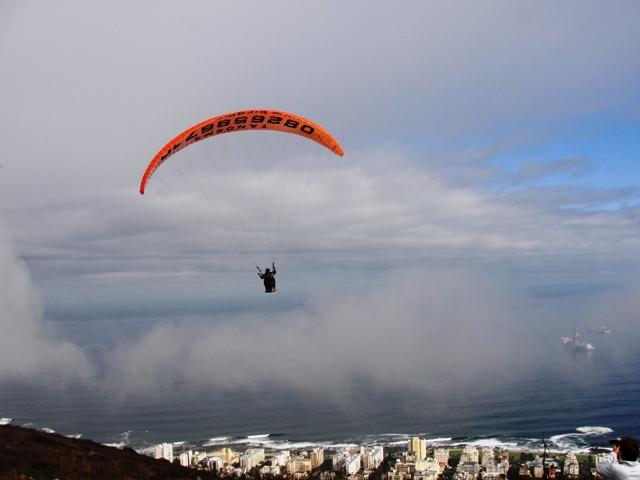 And paraglided with the birds over Cape Town.

Back on the hunt Josh was still at it. Making unbelievable shots with his bow and keeping up the quality. 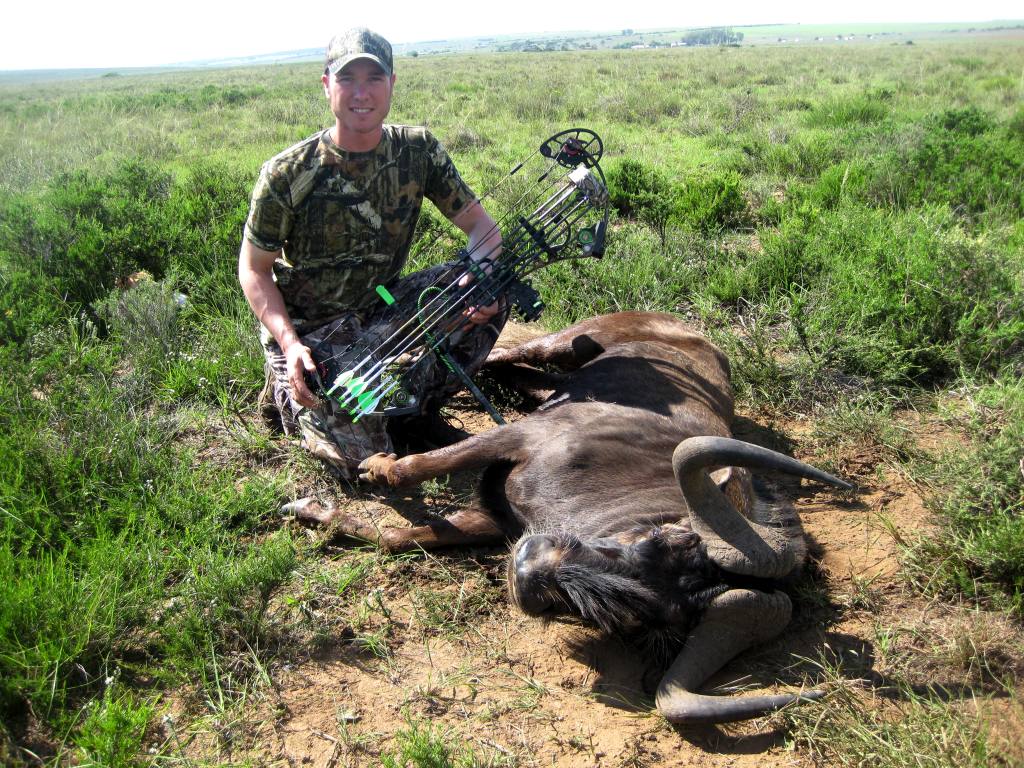 Late one afternoon the guys decided to hit a hide over water and salt. A great Black Wildebeest came right in and Josh let an arrow fly. The bull showed no signs of a hit and was off back into the herd. Poor light forced the hunters to call it a day. Bright and early the next morning, the hunters were back in the area to discover Josh’s bull. He had been hit hard with a double lung shot and had died the previous evening, still maintaining Josh’s proud one shot kill record. 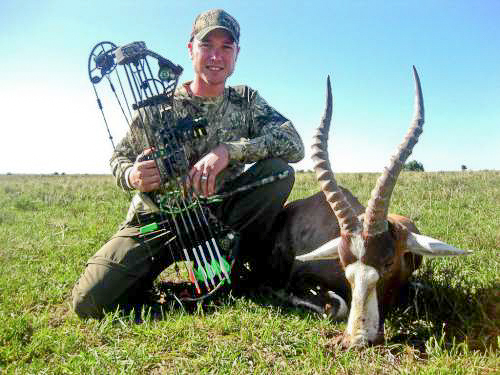 Schalk had been eyeing a specific Blesbuck for sometime and knew Josh would be the man who could pull off the required shot with his bow. We all knew the ram was a monster, but exactly how big it was certainly caught us off guard. After the hunt was said and done, we did a “wet score” on Josh’s ram. At present it may be the New World Record with a bow, but we’ll have it officially measured once the drying period has been completed. Only then can we confirm the size of Josh’s ram. For the time being – A massive congratulations from all of us on your unbelievable Common Blesbuck.

Anne returned from her tour and joined Josh for the last two days of their hunt with John X Safaris. The remaining days were spent in search of a Warthog and enjoying fun-filled days reminiscing about their first trip to South Africa.
They had hunted a variety of species, fished the Indian Ocean and enjoyed an extremely successful bow hunt. Anne had harvested our first 50+” East Cape Kudu of the season and Josh may have hunted a possible new World Record Blesbuck with his bow. Anne had travelled the Garden Route, visited the southern most tip of Africa, enjoyed hot air balloon rides, Table Mountain, the winelands, and paraglided over Cape Town.
Their first trip to South Africa was certainly no ordinary first timers trip. Who knows what their next trip will be like? The opportunities, abundance of hunting, and variety of experiences leave so much available to them. We can’t wait to have them back!
For more information and current updates about John X Safaris; follow us on Twitter, connect with us on Facebook and visit our website!