The Luckiest Birthday Of All………

It’s not often that I have the luxury of a free minute during a safari to send news out to all our avid John X Safaris followers and fans. Taking a quick glance at my “Inbox”, and seeing the hundreds of emails, I now regrettably find myself in the office and not out in the field. Yes, we do day-dream in Africa too. But, to my relief, I also see a number of requests for a blog, certainly a few stern warnings and then those threats that crop up from time to time;”Get that Blog out to us now, or I’ll be coming over to beat it out of you!” Glad to know our fans are “die hard” supporters!
Meet – Dave Tyner, Tim Tyner, Brandon Graber, and Mike Turnipseed. A great bunch of hunters from Omaha, Nebraska. The guys joined Professional Hunters, Gary Phillips and Carl van Zijl, on their first African Safari.
While the guys have joined Gary for the rest of the day, you could consider this as live commentary. Dave Tyner will be compiling his daily diary into a John X Blog and will be sharing the groups’ experiences with you in the weeks to come. But for that you’ll have to wait….
For now I’ll share my free minute with you –A minute I owe to luck. More luck than many of us will ever be blessed with in our entire hunting careers.
Both Tim and Brandon had enjoyed unbelievable success from our Northern Area over the weekend, each bagging Zebra, East Cape Kudu, Impala and Springbuck. On Monday, with only 3 days left of their hunt and bad weather threading from the west, I decided to head back south. We were still on the hunt for Warthog.
A Warthog was Tim’s number one priority on his safari and his birthday was a day off, could we surprise him with an extra special African birthday gift?
We headed south towards the Fish River, the weather wasn’t great and for once I thought the weather mans prediction was going to be truthful. The storm was coming in faster than expected and the gusting wind wasn’t doing us any favors. We spent all morning glassing for pigs without any real results. At midday we spotted a super boar crossing the track ahead of us, but no shot was offered and we continued on our quest. At 15.00, our tracker, Boy, suggested we head away from the river and back track the valleys we’d crossed earlier in the day. At 16.15 we spotted a huge Warthog Boar feeding in a bright green grassy patch at the base of a secluded valley. We set off immediately.
We had hardly begun our stalk and Brandon was on the radio, he’d spotted another super boar a mere 500 yards from the boar we were after. We asked him to keep an eye on both while we crossed the valley to work into the wind. After a lengthy debate we decided that Brandon’s boar would be the smarter option, there was more cover and a steady wind into our faces made it the obvious option. We got to within 180 yards, got Tim onto the sticks and waited for the boar to step out into a clearing. At the last moment a hidden Kudu winded us and ran straight out towards the Warthog. With a flash of grey and a Kudu’s bark, the boar disappeared into the coastal forest.
Not being overly concerned with our missed chance, we changed our course and headed towards the first boar we’d spotted. It’s not every day that one has the opportunity of two fantastic Warthogs within the space of 500 yards. We started our approach, came to within 200 yards of the clearing where the boar had been feeding, and again, a Kudu jumped us unexpectedly. At this stage I was pulling out my hair, or what is left of it! We’d successfully missed two golden opportunities in the space of 45 minutes.
Having watched the entire hunt unfolding below him, Brandon wasn’t ready to quit just yet. He searched hard and made another unbelievable find. Another super Warthog feeding further up the valley. For the 3’rd time that afternoon we approached a big Warthog. This time more determined than ever we proceeded with utmost caution. We got to the edge of the clearing, the pigs were still feeding, no Kudu yet, and luck was starting to turn our way. Once again Tim steadied himself onto the sticks, as our opportunity was about to be presented one of the sows off to the side spotted us. The pigs were off and we were losing our minds!
Having given up on the day’s miss fortunes we headed back towards the truck, a man can only take so much bad luck at any one time. We hadn’t gone 50 yards when the radio cracked into life, Brandon had watched the pigs speed away only to come to a sudden halt in the next clearing. He was sure we had a chance.
I looked at Boy and Tim, the guys were so determined and we had another 40 minutes of shooting light. With a last glance at Tim, I realized this was meant to be – this was his birthday gift from the hunting gods. 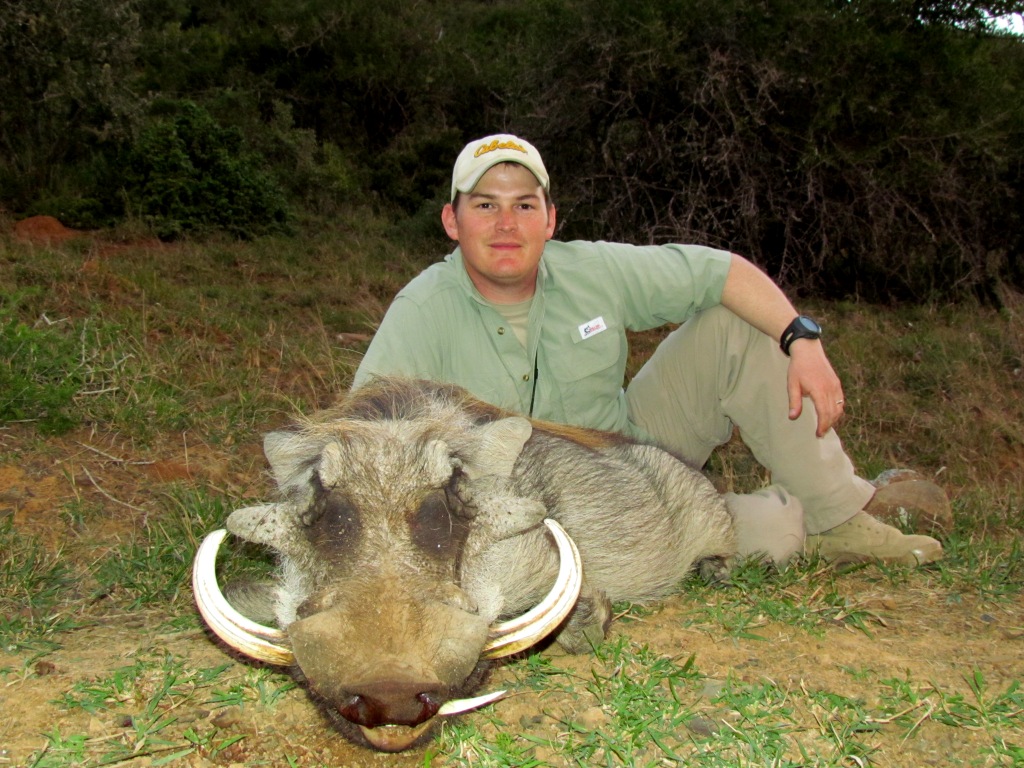 We made a final push for it, approached the clearing, everybody aware of this being our very last chance. I squinted my eyes as best I could and noticed a Warthog’s back feeding in some tall grass 20 yards away from us on our left flank. There were 3 pigs feeding quietly in the small clearing. I adjusted the sticks, had Boy set them up, and indicated to Tim to settle in next to me. In the time it took Tim to reach me the pigs were on the move again, this time straight towards us. I pointed to the pig on the left and indicated to Tim that he should try a shot through the brush. Tim rose to his knees, spotted the massive boar and squeezed off a round from his 7mm. At the crack of the shot the boar dropped in his tracks – A mere 12 yards away.

Our excitement got the better of us and I’m sure the three of us could be heard for miles around, let alone Brandon going crazy on the hill above us! A long photo session later and we were on our way celebrating Tim’s early birthday gift with a few cold Castles.
Tuesday morning saw us rise to an over cast day with dark clouds threatening on the horizon. Tim was still on the high from the day before and his birthday was set to get even better!
Brandon had been as much a part of the previous day’s hunt as any of us on the ground. He had been our spotter and in his exact words;” Watched a 3D hunting show. LIVE!” He had spotted that second Warthog first and was determined to hunt it.
I tried my utmost to prepare Brandon for disappointment. I have never seen so many unbelievable Warthog in one concentrated area ever before, let alone during a single afternoon. With all that said, we headed back to the same area. I hadn’t sat down for a minute and we’d spotted Brandon’s boar from the previous evening. I was literally sitting there asking myself if our luck was for real.
We started off immediately, those dark clouds on the horizon had become much darker by that stage, and more importantly, were now over head. We had to make a dash for it before the pigs took shelter from the weather. We got to within 600 yards and there we were again, check mate. Waterbuck on our left flank, Kudu on our right, and a group of Mountain Reedbuck below us. We settled down and waited out our options, sooner or later the variables would have to change and our chance would come. Three hours later and we were still stuck, the Warthog in the meantime had taken a mid morning siesta. At 11.00 he rose and started following a few sows towards a waterhole. We knew our chance had come….. 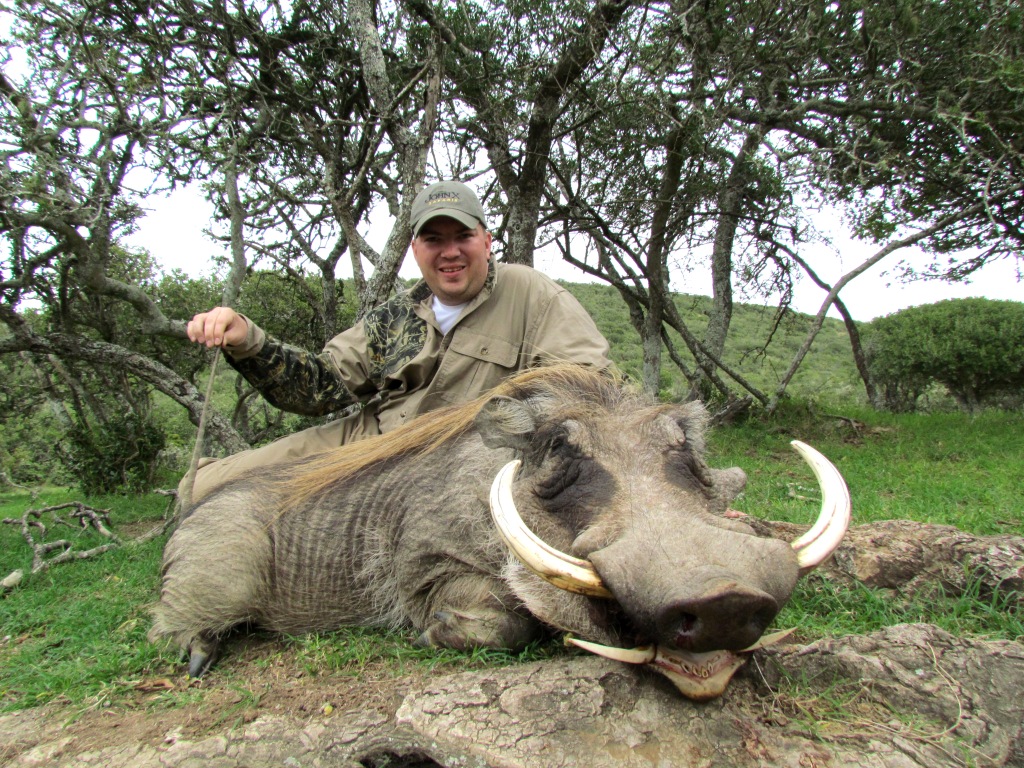 We backtracked, out smarted the Kudu at their own game and waited patiently at the waterhole. All we needed now was a thirsty Warthog and a ton of luck! We hadn’t waited 10 minutes and the massive boar stepped out exactly 67 yards ahead of us. I confirmed the distance to Brandon and urged him to keep the shot low; we had set his 7mm Short Mag. at 200 yards dead on. Brandon dropped the boar in his tracks and ran up for a quick follow-up shot.

From that moment on, excitement took on a whole new level. We had not only hunted one massive Warthog for Tim’s birthday, but followed it up with another for Brandon the very next day. 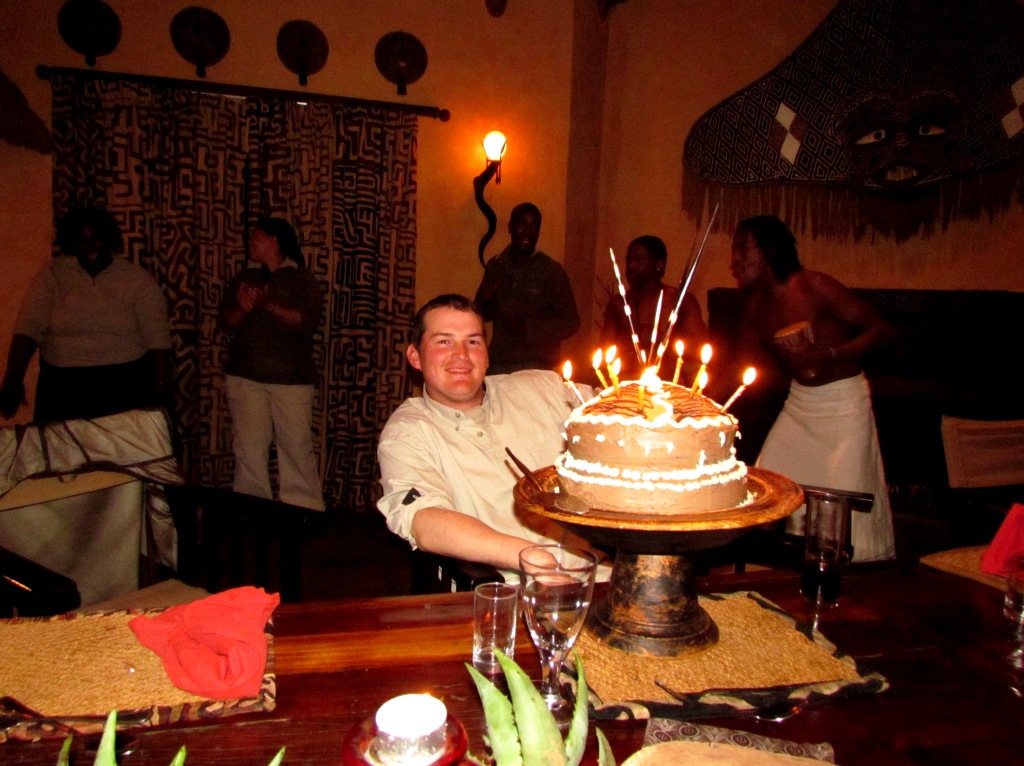 Last night we celebrated Tim’s birthday the African way. We baked a cake, drank fantastic South African wine, over indulged at dinner, and enjoyed the beat of Africa! 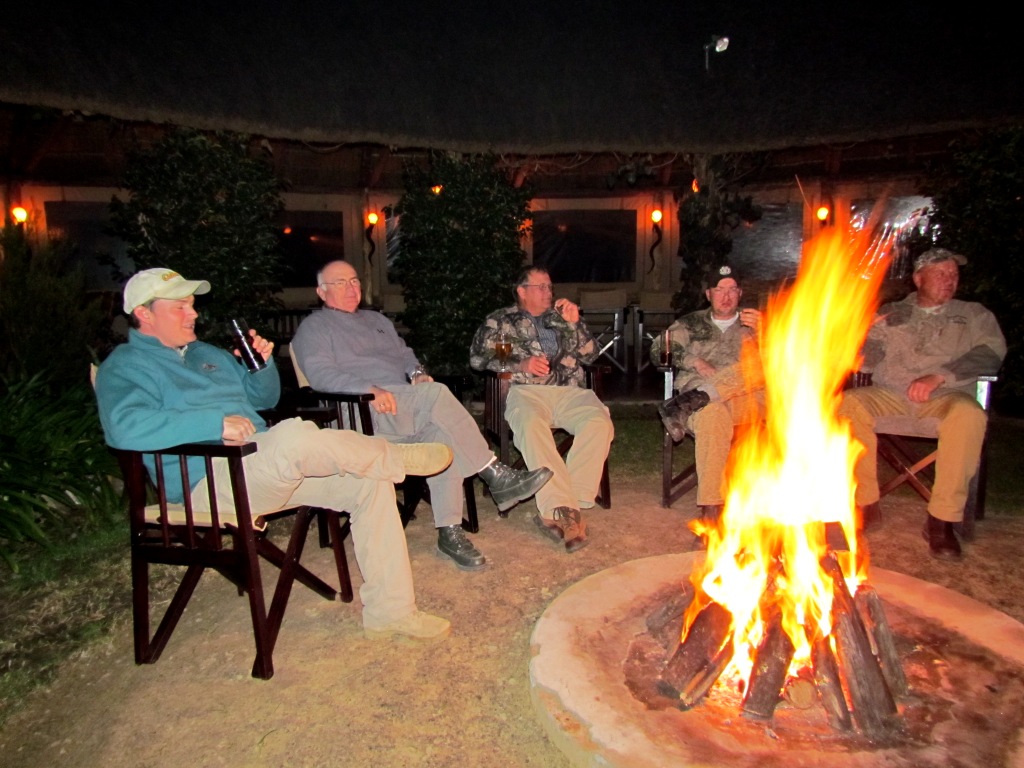 Of course, Tim’s birthday had to be topped off around the camp fire with the boys!