This past week saw Tony White join Professional Hunter, Gary Phillips, for his second trip to John X Safaris. Tony first hunted with us during 2008 where he and Gary hit it off really well. On that first safari Tony hunted a variety of Plains Game species from our Coastal and Northern Mountainous areas. 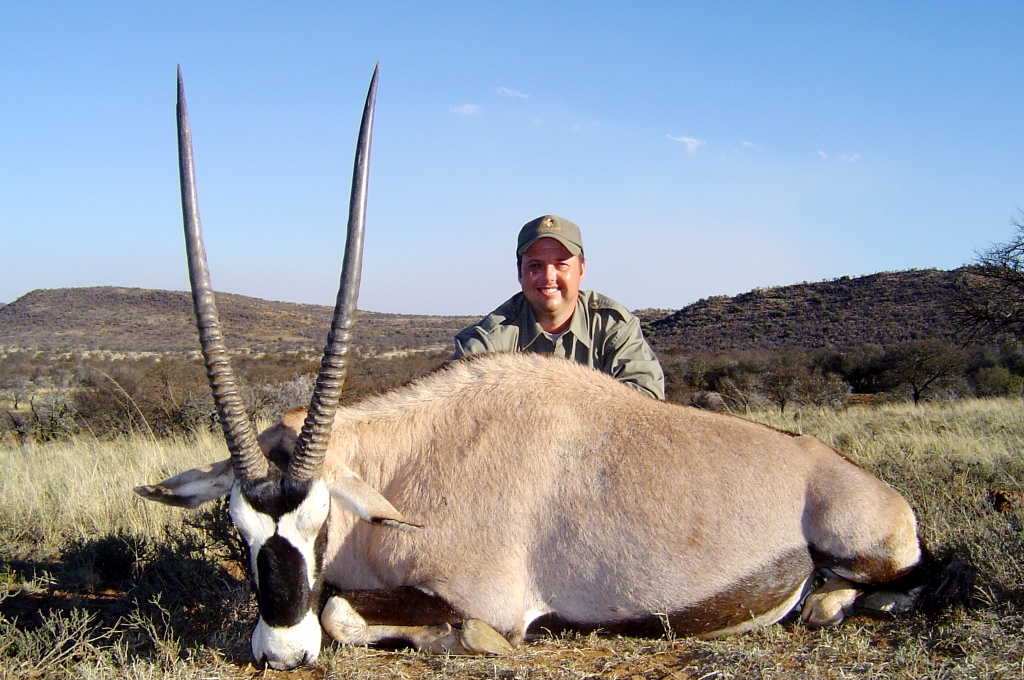 This year saw the guys on the hunt for White Blesbuck, Blue Duiker, Cape Eland, Blue Wildebeest, Cape Hartebeest and a variety of Springbuck, just to mention a few.
Day 1 – The hunters were up early, heading towards to coast on the hunt for Blue Duiker. Both males and females make for super trophies, forming part of the Tiny 10. Hunts are done by finding suitable paths in the dense forest, while moving the animals around by Jack Russell’s. A 12 gauge shotgun is best suited for these fleet-footed masters of the forest. 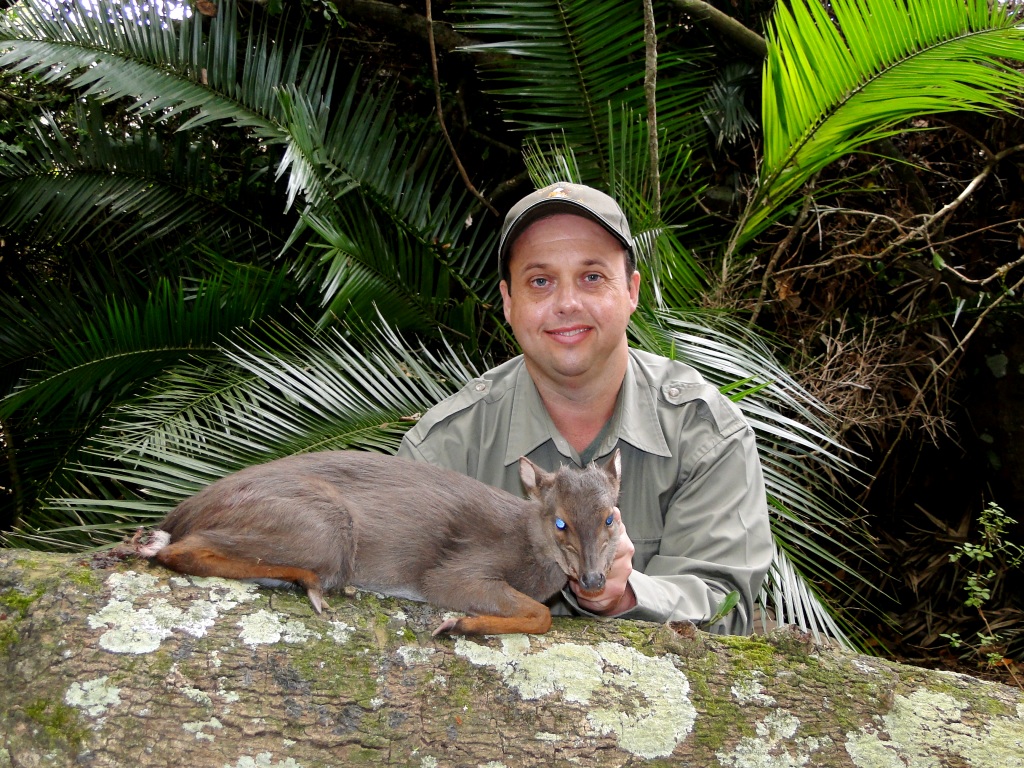 Tony’s safari hit the ground running when he lucked into his Blue Duiker during the first morning of his hunt on the very first day.

Day 2 – The hunters rose at dawn once again, this time continuing on the track of a Caracal from the previous day. The wind that morning was gusting badly, making the job of the hounds extremely difficult. The dogs tried with all their might, but the weather never gave them a real opportunity at holding a scent. The guys retired to camp at midday before heading out in search of Cape Eland or Hartebeest. 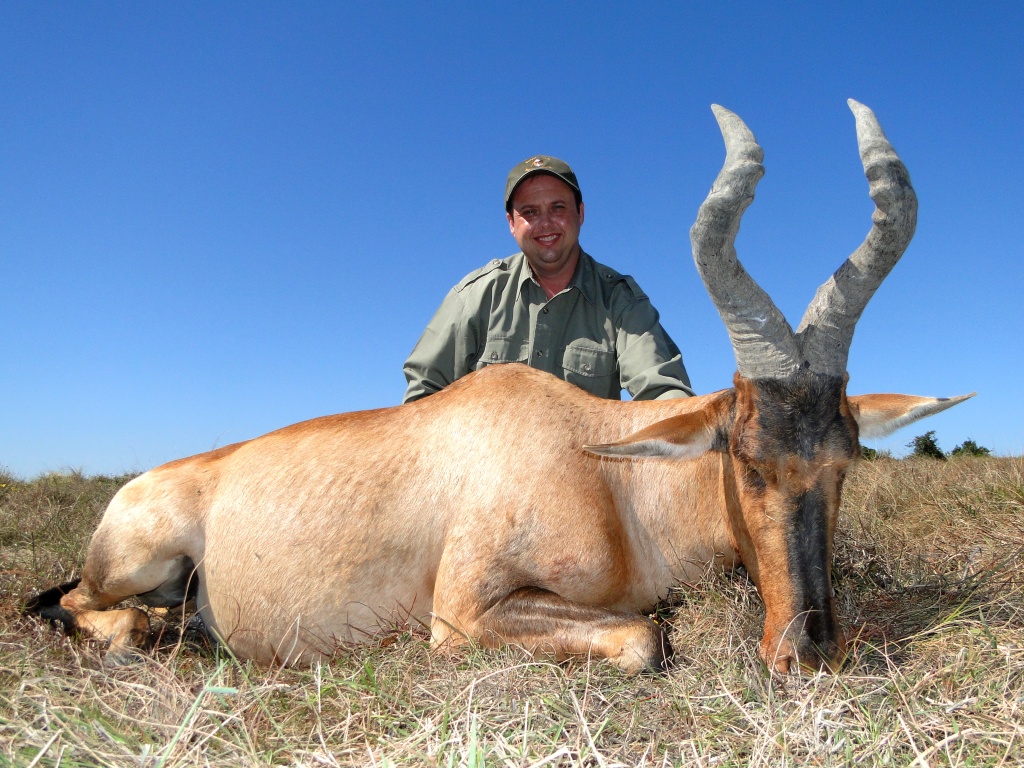 Tony’s luck may have let him down on the Caracal that morning, but his luck was back that afternoon, bagging a fantastic Cape Hartebeest.

For the remainder of that afternoon they spotted a number of good Eland and the usual variety of Plains Game. In the end, the setting African sun forced them to abandon the hunt and retire to the bar for the evening.

Day 3 – Having spotted a number of Eland the previous afternoon, the hunters returned to the same area, hoping to pick up from where they’d left off. Within hours they spotted a great old Eland Bull feeding in a secluded valley away from the herd. The guys took their time, knowing that the bull would be a wary one. Tony settled onto the sticks and squeezed off the round. The bull jumped into the air at the crack of the shot, kicking out with its back legs, ran 30 yards and collapsed with a well-placed lung shot. 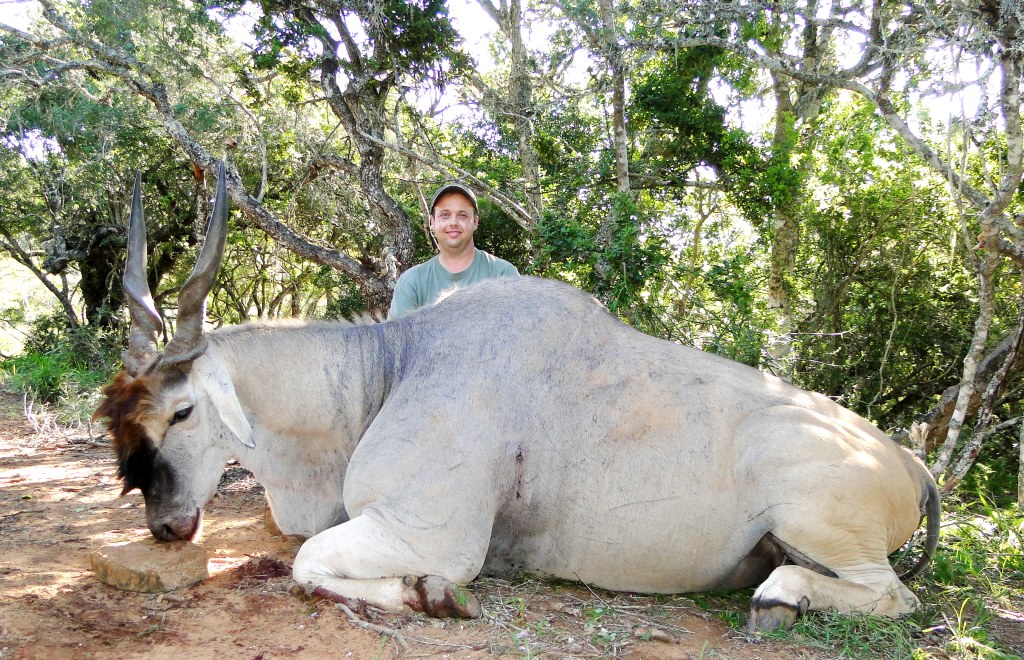 A closer inspection revealed the bull being even better than expected. There was certainly no ground shrinkage on this old bull.

Day 4 – Gary had planned on heading north after the mornings Caracal hunt. The week was turning out to be a windy one, making for tough cat hunting conditions. The dogs did however pick up a good scent that morning and chased hard, but unfortunately caught up to the Caracal before it could tree. A Caracal seemed to be Tony’s boggy species. The hunters packed their bags and hit the road for the 3 ½ hr journey north. 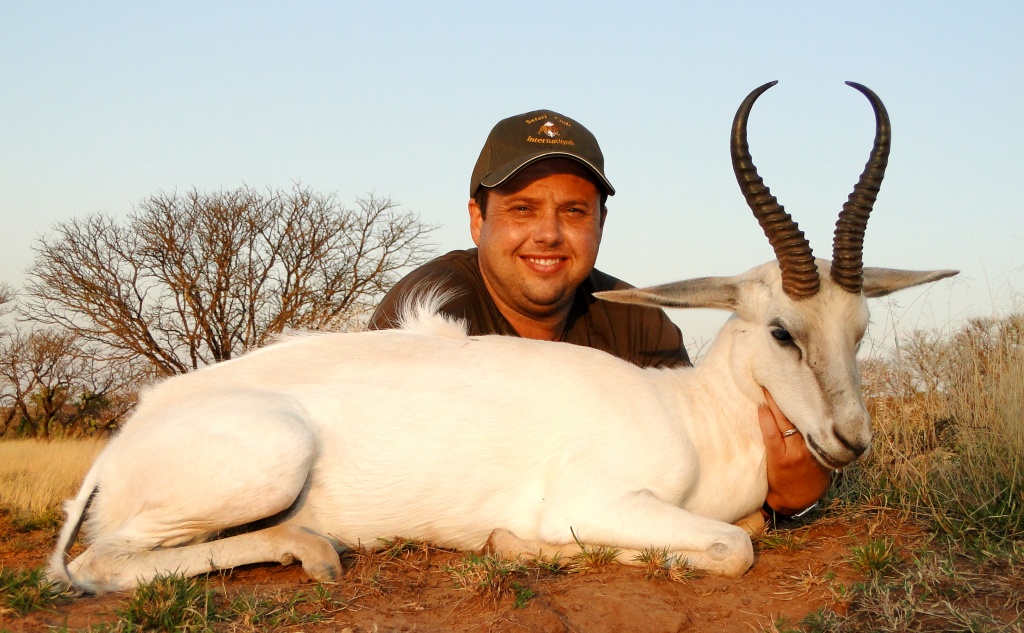 Arriving in the north with some day light to spare, the guys wasted no time settling in, opting for a White Springbuck hunt. This the 3rd in Tony’s Springbuck slam.

Day 5 – Tony was extremely keen on completing his Springbuck slam. The all important, but rare Copper Springbuck, was the only missing ram in his collection. Tony and Gary travelled west to join our good friend Niel for an interesting day with this passionate Springbuck man and his hundreds of Springbuck. 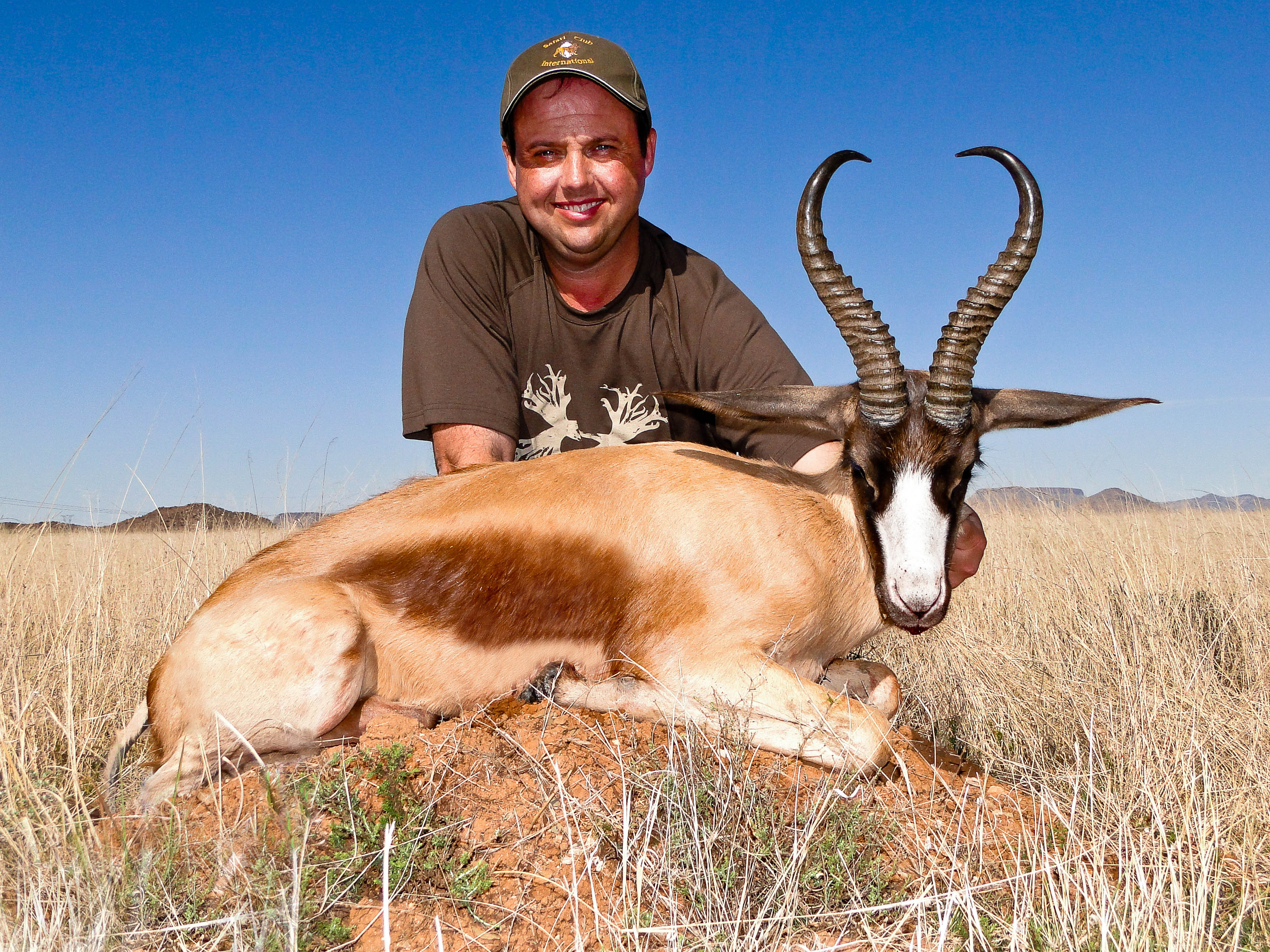 Having looked hard, the hunters settled on this beauty of a Copper Springbuck ram. A magnificent trophy to complete Tony’s Springbuck slam. 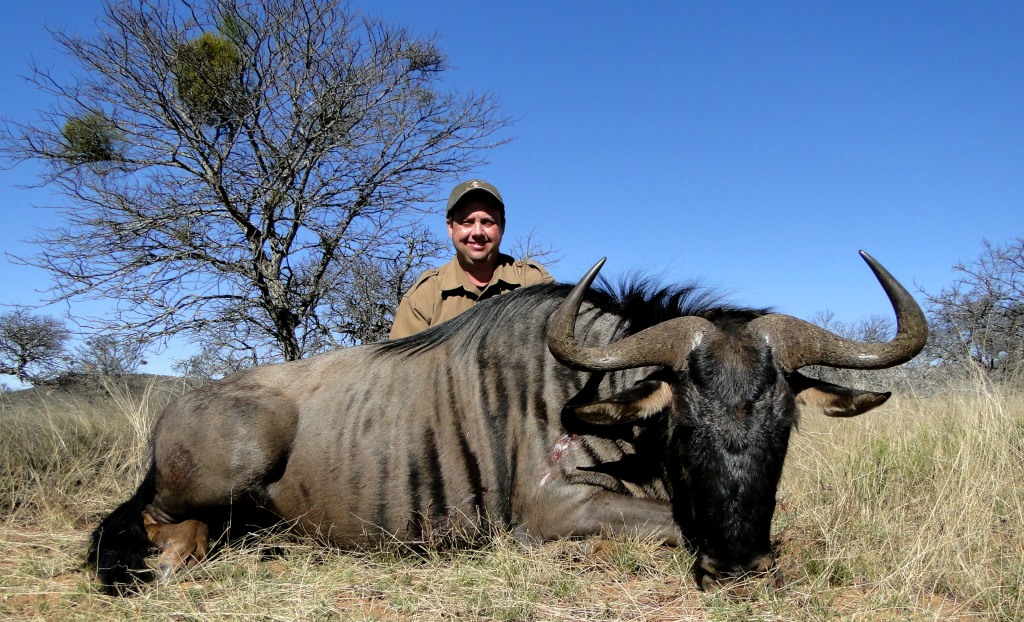 That afternoon saw Tony battle it out with a determined Blue Wildebeest. Tony hit the bull three times on the shoulder before the bull came to rest. A relieved, but happy Tony with his Blue Wildebeest. 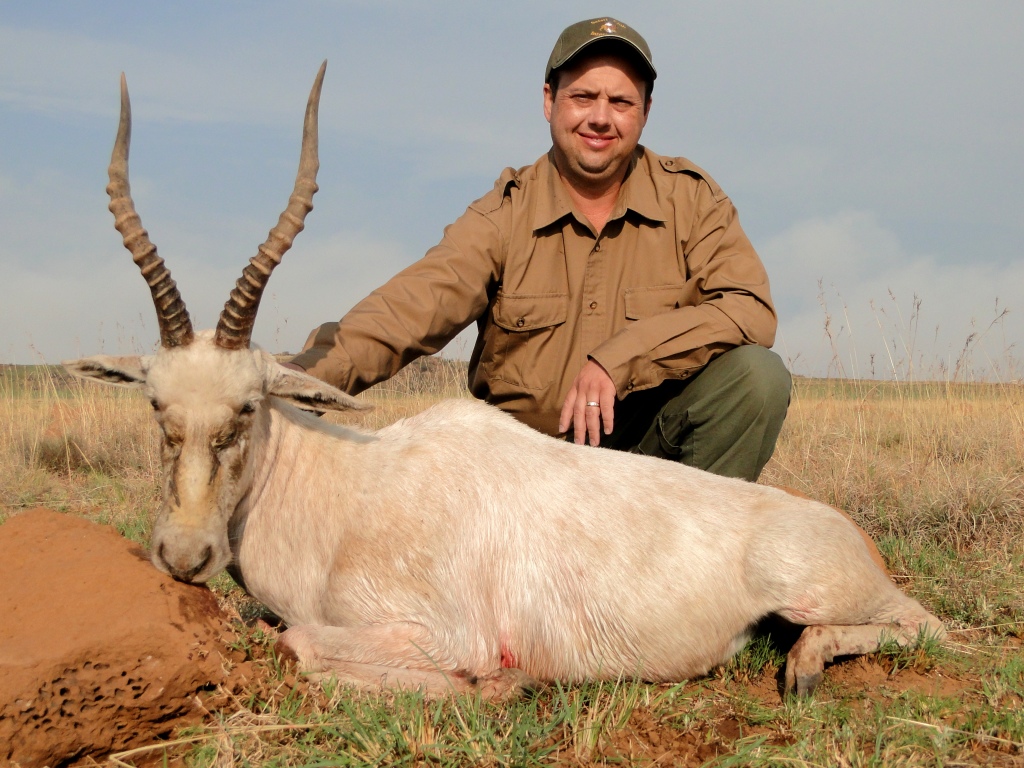 Day 7 – The hunting party had enjoyed a successful few days in the north, but it was time to pack up and head back south for the remainder of the safari. Tony still had one or two species in mind.
Day 8 – During the course of Tony’s two hunts with John X Safaris he had spotted a number of impressive Waterbuck while on the hunt for one thing or another. Those Waterbuck seemed to keep him occupied a bit more than most, we soon found out why. Many years ago Tony had gone down to Texas for an exotics hunt; on that hunt he had hunted an opportunistic Waterbuck. Needless to say the bulls he was spotting while on safari with John X Safaris looked a fair size bigger and more impressive. 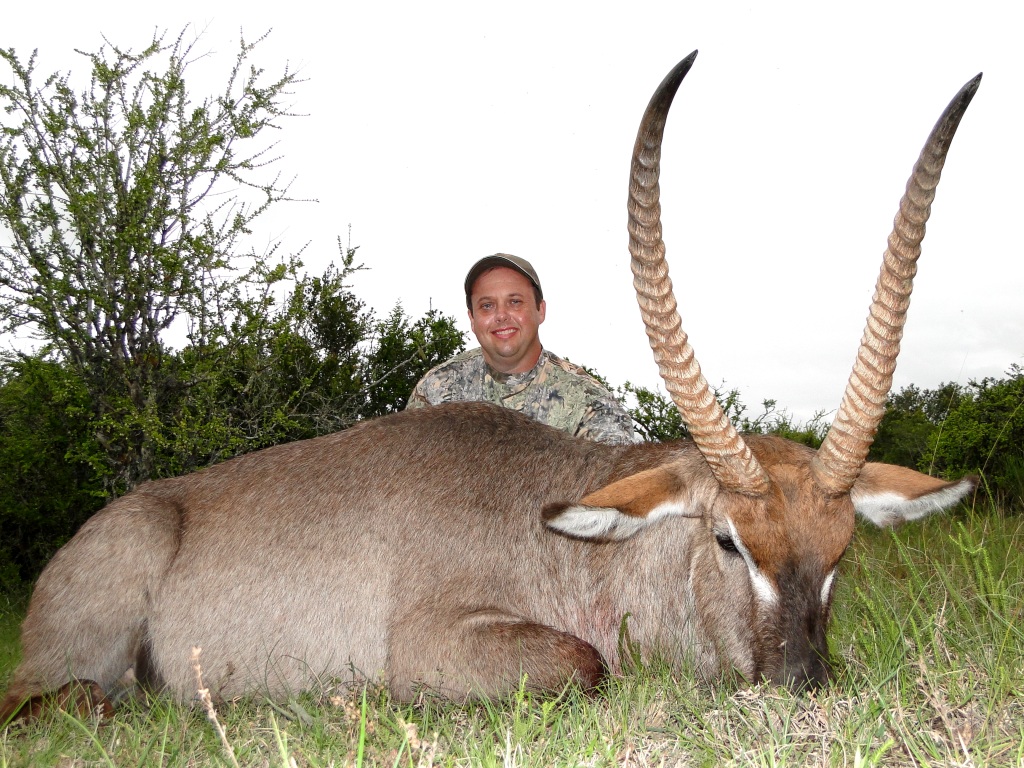 An understandably elated Tony with his monstrous Waterbuck hunted on the second last day of his 2011 hunt.

Gary and Tony spent the last few days playing Golf, tending to Gary’s beloved cattle, and reliving a few memories from Tony’s time with John X Safaris.
One particular story kept us on the edge of our seats whenever he told it, usually ending in gut busting laughter from all within earshot. The story involves Gary and Tony, “The Rat & Parrot Pub”, some shooters called “Springbucks”, and an eventful journey topped off by and Elephant who barricaded Tony’s room door. Unfortunately I can’t tell you more, you’ll have to hope you’re in camp the next time Tony joins us on safari. What I can say, the story begins with a good old “southern” Whoooowe!
For more information and current updates about John X Safaris; follow us on Twitter, connect with us on Facebook and visit our website!