“Randy was shaking like a man with severe hypothermia. It was fantastic seeing him like that, knowing how much it meant to him, and having the excitement overwhelm his self-control……”
But before I get ahead of myself, let’s start at the beginning – long before Randy had even boarded the South African Airways flight in Washington.
During early May I received an email from our good friends Chris and Martie Petersen. They were planning on joining us on safari during late July, bringing along with them Martie’s niece, Cherie, and her husband, Randy. The entire group was planning on doing some form of hunting, with Randy leading the pack on his quest for East Cape Kudu.
Our hunt started in the south from our Coastal Base Camp before heading north to experience the Karoo in all her glory. We took our time making the 3 ½ hour journey north, touring and stopping off along the way in the true spirit of life on safari. 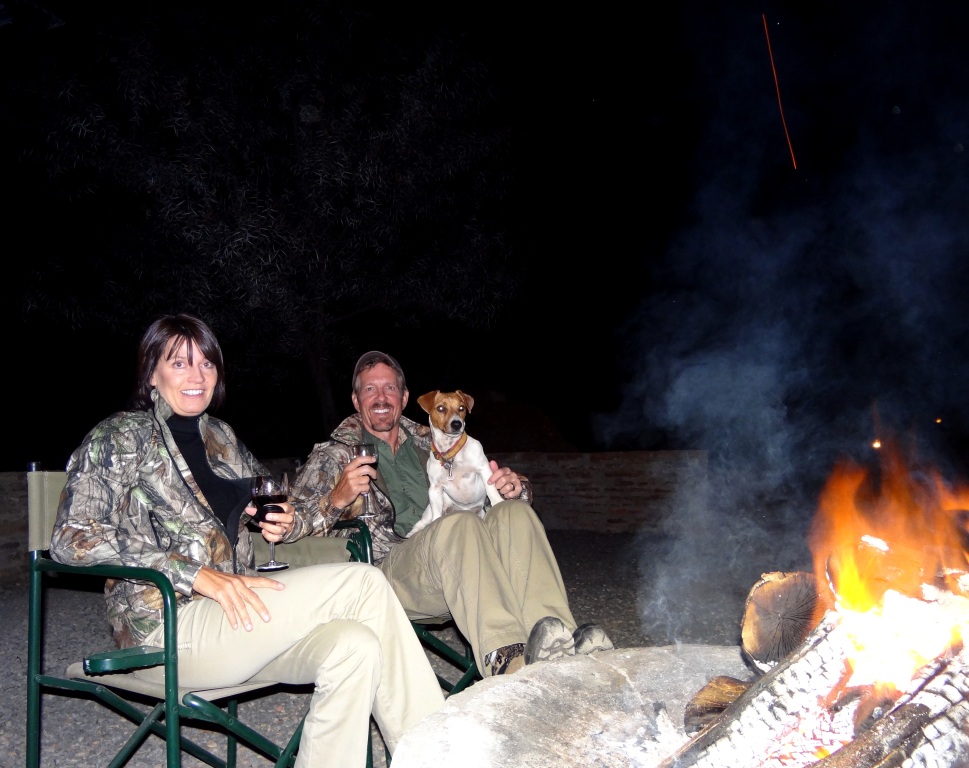 Having arrived in the north, Randy and Cherie settled in for the evening. A good rest was required before the big hunt starting the following day.

That morning I woke the crew and heard our tracker, Boy; pull in with the truck just after 4am. A lively fire with a quick coffee and a light snack drove out the last bit of sleep from weary bones – and we were off. Our bearing for the day was north-west, directly towards the edge of the escarpment, running down to the great plains of the Karoo.
At 5.30am we collected Niel along the way and continued our journey into the mountains. The area we were hunting formed part of a 150,000 acre privately owned low fenced area. Game thrive in their numbers on the great plains, and valleys team with groups of Kudu and Mountain Reedbuck. The higher reaches of the mountains can be seen ruled by the many hundreds of Baboons and small groups of Vaal Rhebuck, while the ever-present Klipspringer can be found sticking to the cliffs and rock falls. Niel has been managing the area for the past ten years. He’s a meticulous man, very strict on quota and obsessed with quality. Those who’ve had the privilege of having him along on a hunt can vouch for his passion – a true hunter and a leading conservationist.
Niel had been spotting a large number of Kudu during the course of the previous week, with most of the bigger bulls feeding away from the cows. We decided to hunt the north facing slopes first, hoping to spot an old bull sunning himself in the early morning rays. At first it was quiet; in fact we became a bit concerned. I’d look over at Niel and Boy, knowing that they were thinking and wondering the very same thing as me; where were all the Kudu from the previous week? Chris and I had spent all evening prepping Randy and Cherie on how many Kudu the area boasted, now we couldn’t buy one for any money in the world.
As the morning grew on and the temperature rose we finally started seeing Kudu. 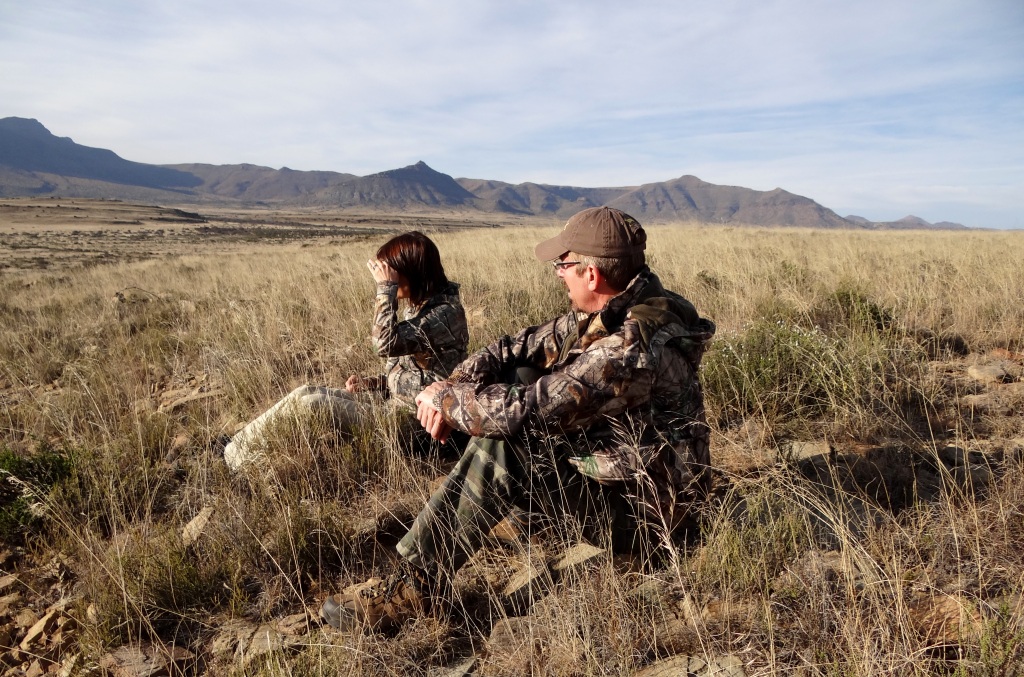 At first, both Randy and Cherie battled to spot Kudu as they fed in the distance. After some time it became easier and also extremely evident why they were referred to as the “ghosts of Africa.” 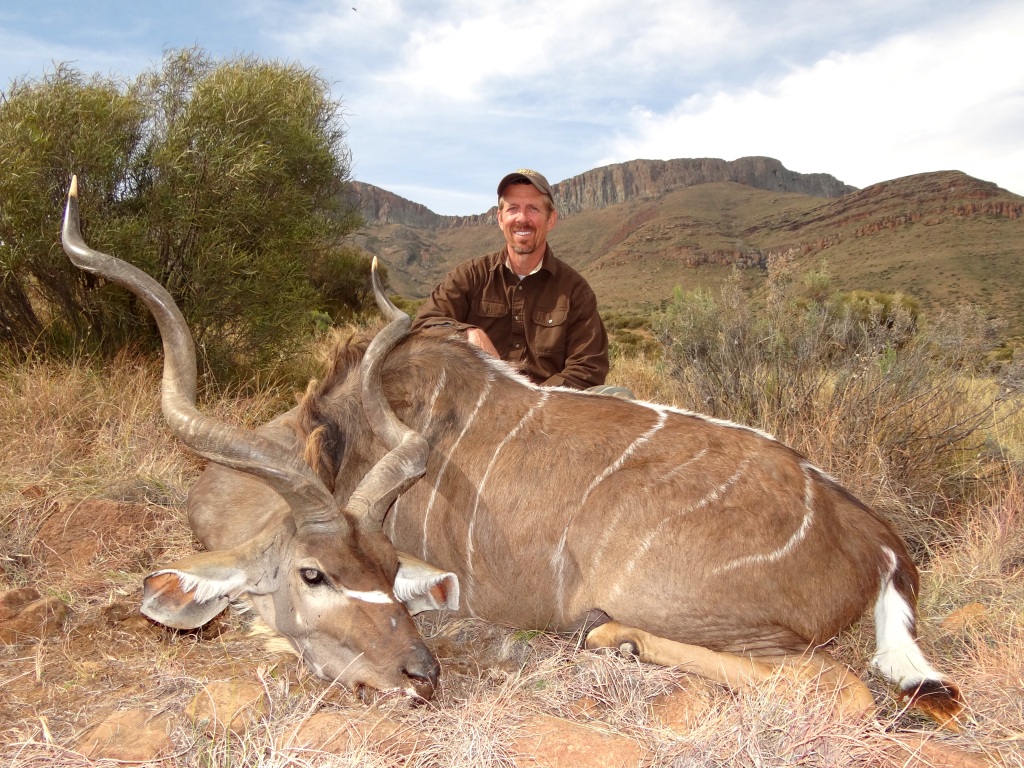 We came up onto Randy’s bull, legs tucked in underneath him, as if he’d never moved from his original bedded position. A mirror of perfection.

By this stage we had Boy and Niel running in our direction, both as eager as the other to see the bull at close quarters. Chris and Cherie followed in the rear with an entire team of porters in close pursuit. The fun and excitement was in full swing while the work of getting our bull down had only begun. 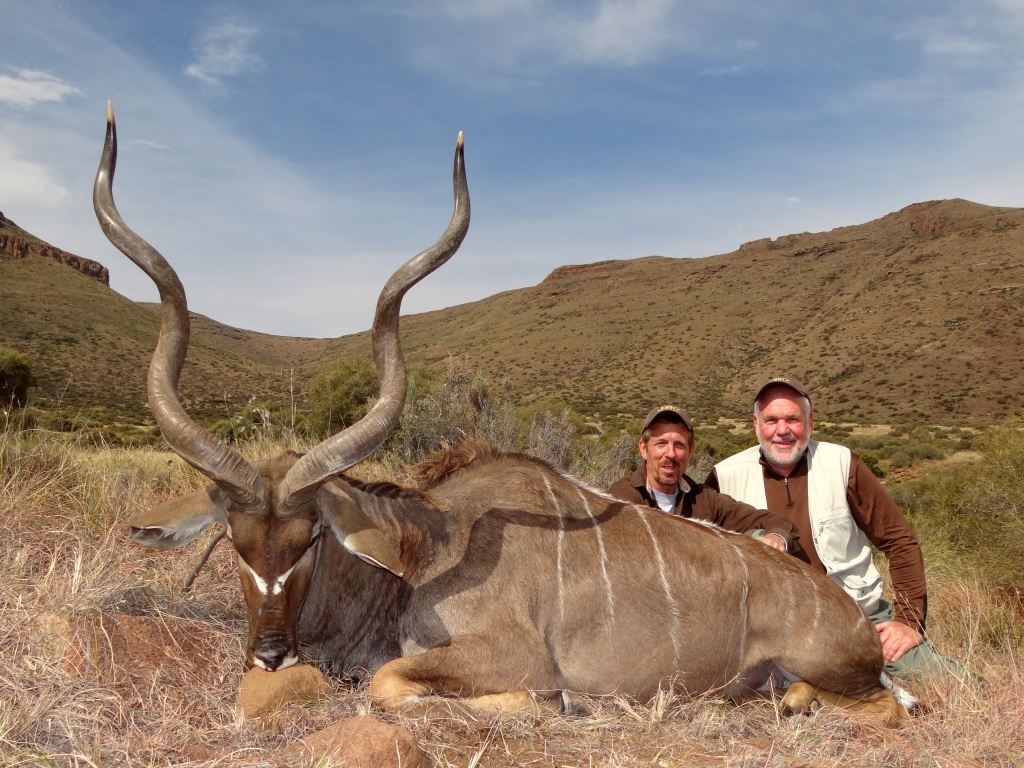 Randy had earned his Kudu in every sense of the word. He had kept his cool, held his nerve and made the shot count when it was most needed. He had hunted his bull, and in doing so may have just caught a ghost….