A month to be proud of….

If you thought 2014 couldn’t get any better, then don’t feel alone, I was sitting on the banks of the Zambezi River a mere three weeks ago counting my blessings and wondering how the remainder of the season would pan out? I’ll be honest, at that moment I was sipping a cold locally brewed Mozambican 2M with my good friend Jeff Edland, savoring the success of the days hunt. At our feet lay a known man-eater, at 14 foot in length and more than a meter at the belly, one could understand the fear the locals had for this Crocodile.

It had not been an easy hunt, the wind wasn’t perfect and the day had been long. Numerous Crocs had been seen, two of them meeting the requirements we were after, but nothing had come from endless patience. We had given up, called it a day, and then no more than a mile from our landing site there he was. Jeff made another telling shot – this time at 70 yards off sticks – and if you’re thinking what’s the big fuss at 70 yards? Go try hitting the centre out of a Oreo cookie at 70 yards without a dead rest. It’s tough!

Jeff not only enjoyed success on a huge Crocodile, but a first night Leopard over hounds had set our safari off on the right foot. Our hounds man Coenraad had expressed his concern over rain that was expected later that week, and he wanted to give it a go on that very first night. We trusted our man on the ground and within hours had a big tom treed. 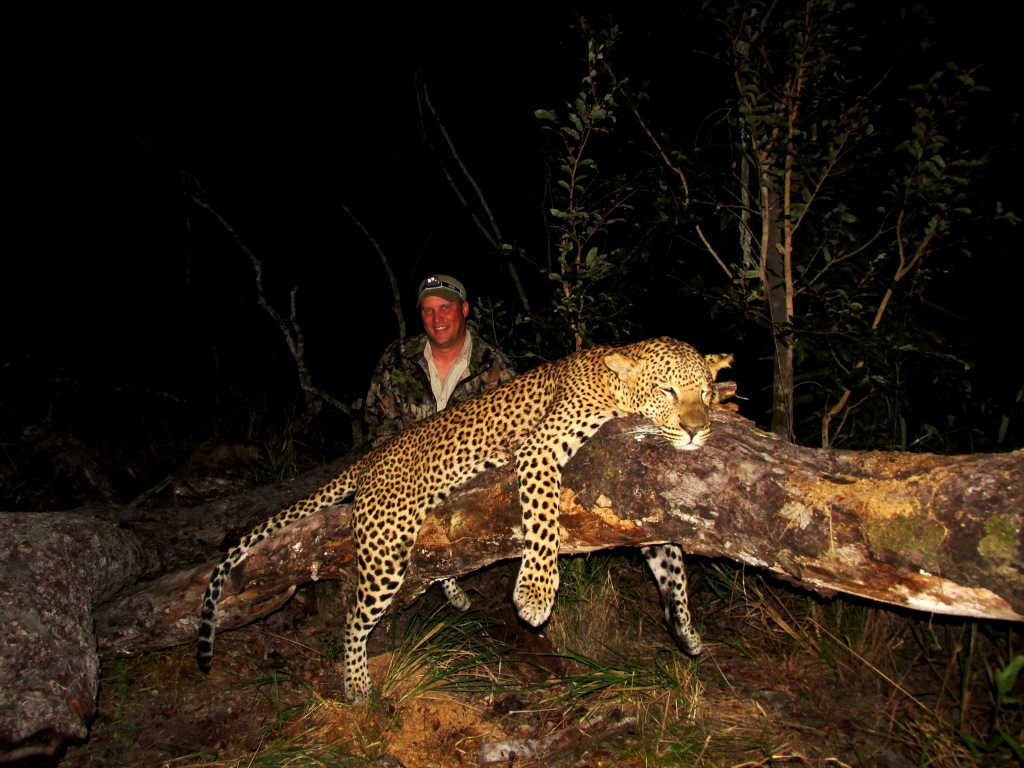 To say that it was a relief would have been an understatement! Forget the success rate ratios – As described to me by a friend of mine, the famous Zimbabwean Leopard hunter, Lou Hallamore, ” It’s a 50/50 – Either you get one or you don’t.” We had ours – And at that a beauty!

And that’s the way our Mozambican hunt went… The trophies speak for themselves and the adventure enjoyed with our old friends and hosts, Poen and Zandre, was a treat and as good as ever. Poen, together with our local trackers, Gotchi and Albieno, have become an extension of John X Safaris in Mozambique. Seldom does a day pass without unexpected adventure, with the quality of the hunting a given…

Back south in South Africa, we welcomed Steve and Charlene Galas, as well as the father/son duo of Dan and Jake Tomcheck. For both parties it was to be their first hunt with John X Safaris, enjoying both our coastal and northern Karoo areas.

Steve and Charlene teamed up with Professional Hunter, Ross Hoole, hunting a variety of plains game. An outstanding Gemsbuck and Kudu hunt was some of Steve’s favorites, but a certain highlight for us was Steve’s Waterbuck. From time to time one stumbles upon an interesting trophy, one that sees one becoming addicted in its pursuit.

For Steve and Ross it turned out to be a superb Waterbuck, the only catch, this bull had broken its right horns’ tip during the course of their hunt. It was now more than “just” the hunt, there was a story… In the end they did get him, and while many would wonder about their quest in turning down so many good bulls to hunt this particular bull, I and others who knew what they were after could appreciate their dedication. He may have had a broken tip, but the broken horn still tipped off at 27”, while the other 32”. A trophy of a lifetime in my eyes, and story to go with it.

For Dan and Jake Tomcheck, joining Professional Hunter, Greg Hayes, it was to be a truly special safari. Since the start of our father/son hunts we’ve been overwhelmed by the response of so many of you. But the added bonus that was not expected has been the reward of seeing fathers and sons spending quality time together, and ultimately rekindling relationships and family bonds without external distractions.

The hunting proved to be a treat under the guidance of Greg and tracker, Bless. From the coastal forests, to the plains of the Karoo, and finally up onto the mountains in the north…

With early July rolling on it was time to welcome our extended family from Reno, Nevada. Over the years we at John X Safaris have been privileged to host many hunters from around the world, some come on that once in a lifetime safari, others a couple more times, then there are those who form part of the family, coming every other year. They bring their kids, their friends, and families – ultimately bringing them home to Africa as often as they can.

One such family is the Robinson family. Steve had first joined us on safari with our good friend, Rich Adams, many years ago and since has shared a number of memorable safaris with us. Since that first hunt, Steve has introduced his wife, Linda, as well as kids, Ashley, Hunter, and Kaley, to African safaris. Our families have grown together, enjoying many trips throughout southern Africa.

This year proved to be one of our most enjoyable safaris to date. Together with the Robinson’s, we welcomed the Pitts and Tripp families. The plan was for the entire group to spend four days at Lalibela, and then the girls would head down to Cape Town with Trish, while the boys headed to the Karoo for some more hunting. From there we would all meet for the last two days of our safari down in Knysna on the Garden Route.

An action packed safari it proved to be with a number of record-breaking trophies hitting the salt. A 55 3/8’’ East Cape Kudu for Bo Tripp was the trophy of a lifetime, not to mention an awesome Klipspringer and Waterbuck with the family. Arnie and Hunter Pitts made for quality entertainment with some trick shooting, with humor like no other. My team of Steve and Hunter were as solid as ever, with Steve hunting a magnificent Kalahari Springbuck of 17’’, while Hunter stole the limelight with an epic old Bushpig we’d been after for quite some time.

While the “seasoned” hunters may have dominated the hunting in numbers, it was the junior hunters whom most impressed us. Two very special young ladies reminded us what it was all about and why we enjoy our passion for hunting. To Kaley Robinson and Abie Tripp – Congratulations on some exceptional shooting and a great bunch of trophies!

Meanwhile down in Cape Town the girls were warming up to their new-found slogan of “Living on the Edge”…. Yes folks adventure sport junkies to say the least! From the V&A Waterfront to the Nelson Mandela Apartheid Museum, Cape Point to Table Mountain and Paragliding off Lions Head, to Great White Shark cage diving. That and so much more…

All in all it proved to be a mammoth safari to say the least. The combination of hunting, Big 5 photographic safaris, and the Garden Route to Cape Town sight-seeing tour, provided for first class vacationing. The fun and games never stopped from the minute the group arrived to the day they left.

As mid July rolled along we welcomed our partners from Blaser, Marc Hillerman, and hunter, Jan Bredensen. They joined Professional Hunter, Ross Hoole, for a week of mountain hunting. Over the course of the week the guys hunted hard, enjoying long hikes with hours of glassing, hoping to find what they were after.

During their quest they hunted a variety of species including a Caracal with hounds, Blesbuck and Common Duiker, but their mountain species is what they had come for, and wow were they impressive… 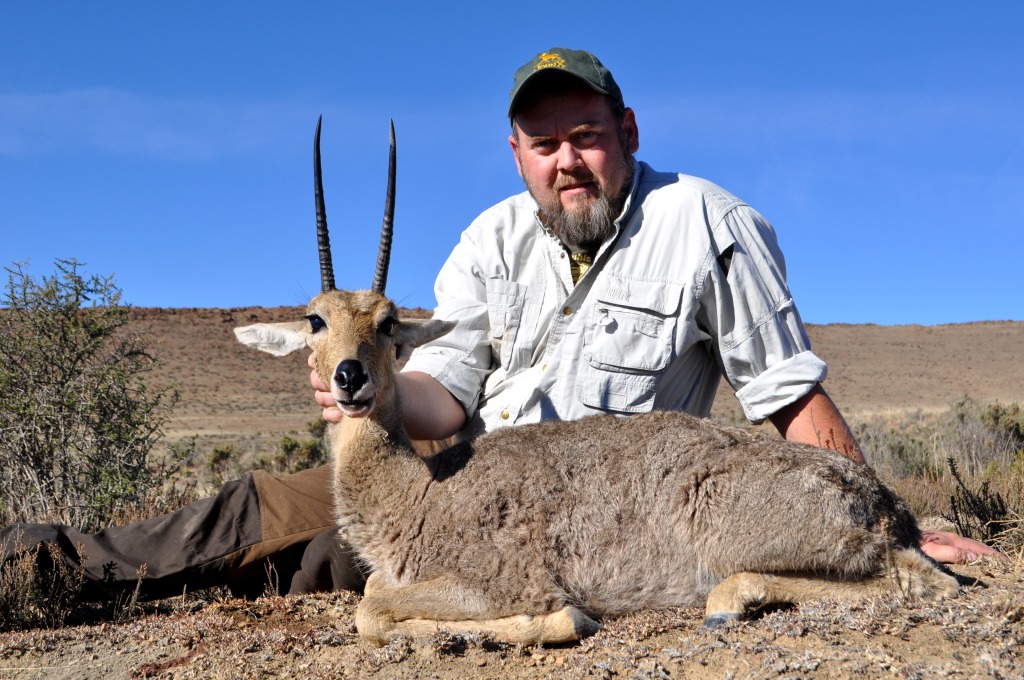 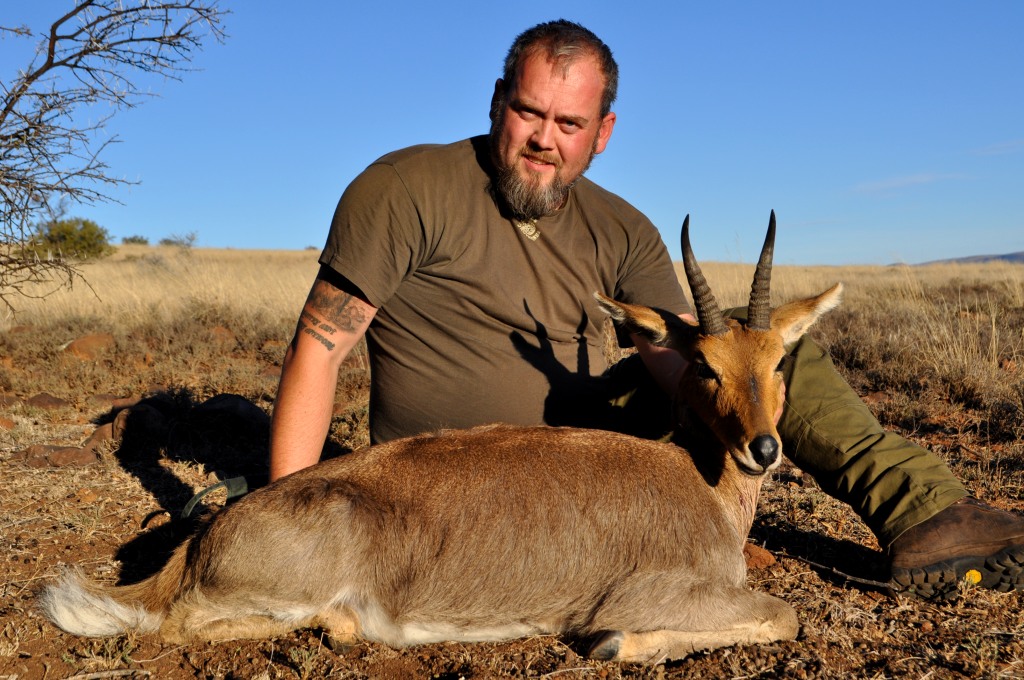 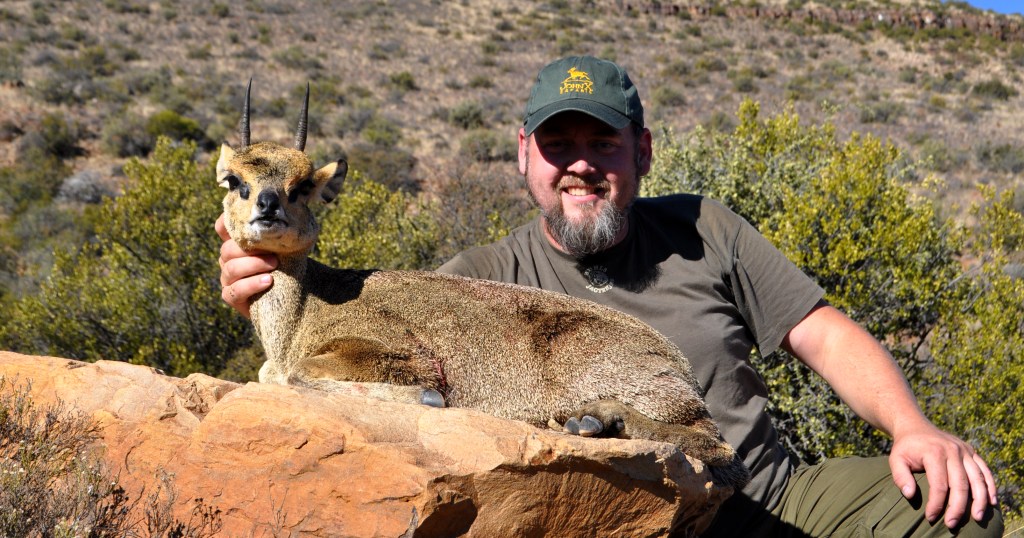 Eat your hearts out all you mountain dwellers! These three would be the pride of any mountain hunters’ trophy room.

I’m still in awe at a number of trophies from the past three weeks. As I said before, who would have thought it could get any better, considering the season we’ve had to date, but our areas keep producing the goods and the teams on the ground keep providing world-class experiences.

As I sign off this month’s report, we find ourselves spread across the Eastern Cape. In the north we have our old friend Mike Grier, together with Tom Lincoln and Tyler Geer, back on his third hunt with John X Safaris, while Jose, Trish, and I, are giving back to the industry with our annual PHASA donated hunt. We’re looking forward to a busy period running into early August before we set sail to Mozambique once again. 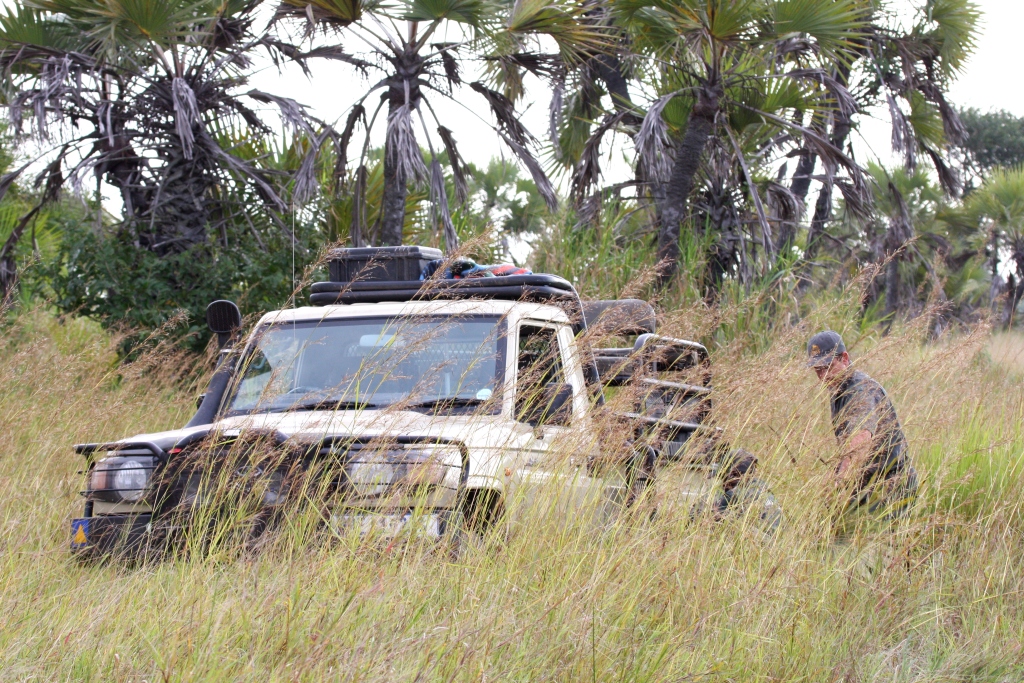 Until next month – Enjoy the outdoors and do so responsibly.