An African Outfitters’ first take on the new age….

Mention the word Africa, and most drift off in thought with visions of Lions and Elephants roaming the vast plains of Africa. Zebra dotting the savannah in their thousands, and Africans drumming in chorus long into the night. That is Africa, but not all of Africa is the same.
There are most certainly endless savannahs stretching for as far as the eye can see, but then there are the forests, mountains, and deserts. The same can be said about rifles.
Over the past thirty years John X Safaris has seen the likes of numerous great rifles from various makers in a large variety of calibers. With each new rifle entering the market so the norm gets challenged – boundaries are pushed far and beyond what was thought possible before, and each gun maker stakes claim to the next best thing. Stick around for long enough in any industry and you’ll meet them, see their new product, and most certainly hear it all.
So you could imagine my interest and skepticism when I passed the Gunwerks booth at a trade show the very first time. With a slogan like theirs, who could not stop to wonder for a minute before continuing on in the maze that is a safari trade show today? And so I stood there day dreaming about, “ 1000 Yards out of the box” , thinking of the many older clients I’ve had to guide over the years, knowing that even 500 yards out of the box would have helped on the side of a mountain when one step further was not an option anymore.
With the imagination running wild I stepped into the Gunwerks booth and picked up a brochure. I realized everybody was extremely busy attending to customers, so I strolled over to the nearest display and picked up the 300 Win Mag. I’m a 300 man – eat, sleep, and preach it. I have come to believe it’s the most versatile caliber for any hunter after plains game in Africa. With various loads you’ll bring down the tiny Steenbuck on the plains of the Great Karoo, to a sneaky Kudu along the edge of a coastal forest, and even an old gun steel-blue Eland bull strutting his stuff on the open savannah. My belief is not one based around theory of what I’ve heard, but more of what I’ve seen proven in the field.
“I bet you could do with one of those in camp”, beamed a familiar voice over my shoulder. It was an old friend of mine and John X Safaris’, Kregg Thomassen. Kregg had been on safari with us to the East Cape, South Africa, on two previous occasions and now had teamed up with Gunwerks.
With one thing leading to another, there we were eight months down the line awaiting our first group of Gunwerks hunters. I’m still not certain who was more excited – The professional hunters or the hunters? Having arrived back home from the US I had broken the news to the guys that Gunwerks would be joining us on safari later that year. The hunt would be televised and the guides would be able to try out the guns themselves too.
From Gunwerks we had Kregg Thomassen and Garret Wall, getting myself and my guides up to speed with the rifles and their capabilities. You must realize, none of us had ever seen anything like this in Africa before – let alone imagined shooting anything like it. The various variables of gauging wind, shoot to distance, temperatures, and height above sea level was discussed in-depth.
Both Kregg and Garret’s shooting school expertise came through strongly here as all of us were up to speed with our hunters by the end of day one. Being up to speed with the system and the theory behind it was one thing, but seeing our hunters use the guns was a completely different story.
Chad and Jennifer Fraughton, from Utah, and Peter Corrado, from Canada, together with the professionals from Gunwerks made up the hunting party.
In all we hunted for eight days, and in those eight days we not only had the privilege seeing what the Gunwerks rifles were capable of, which was impressive to say the least, but more so the capabilities of our hunters.
Not all the shots were long, this in itself proved how versatile the rifles were. This may sound simple and obvious, but not all rifles built for long-range shooting handle targets at close quarters to well. Africa threw the hunters a number of curve balls too, with a couple of days of gale force winds, a rainy day or two, but luckily for the most part the weather was as spectacular as ever.
The hunters had to deal with various difficult set ups, this was not the range anymore, the game was unpredictable and we had now entered their territory on their terms. And then of course there were the long shots, many that left us astounded. As good as the guns were, they still needed the operators, and this is where our belief of the Gunwerks rifles grew substantially.
The system could be the best in the world, but if it proves too complicated to operate and enjoy using, then what would be the point at all? In this regard the four hunters sporting various Gunwerks calibers proved how enjoyable these rifles truly are. 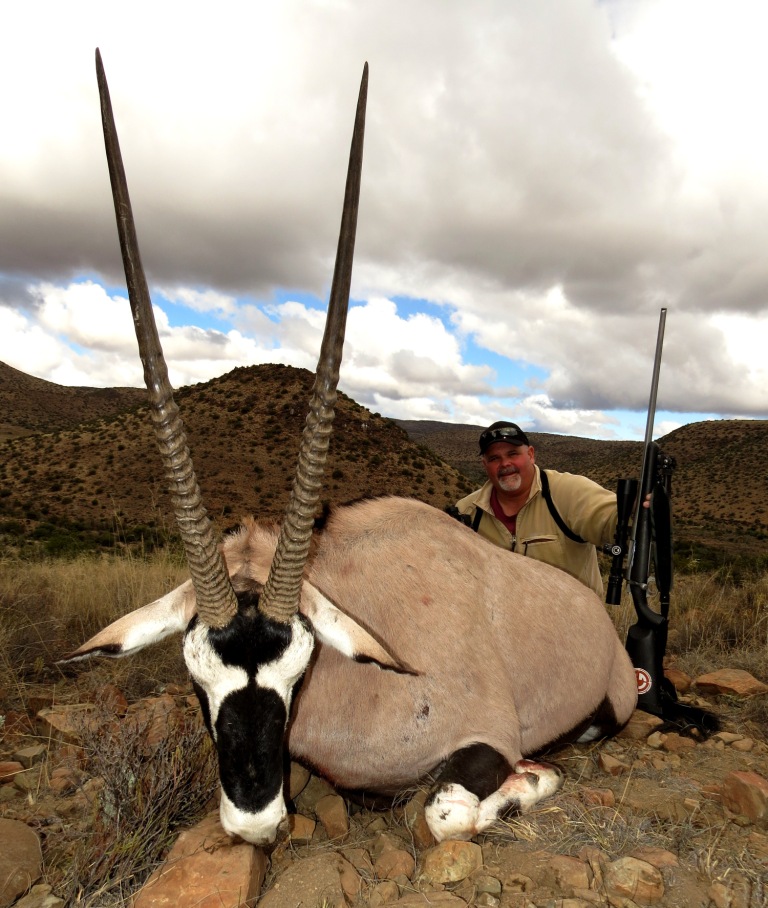 For Peter Corrado and professional hunter, Rusty, there were numerous memorable hunts and shots. A Blue Wildebeest across a canyon at 798 yards was a certain highlight for all, but Peter’s Gemsbuck was just magnificent in every sense of the word. 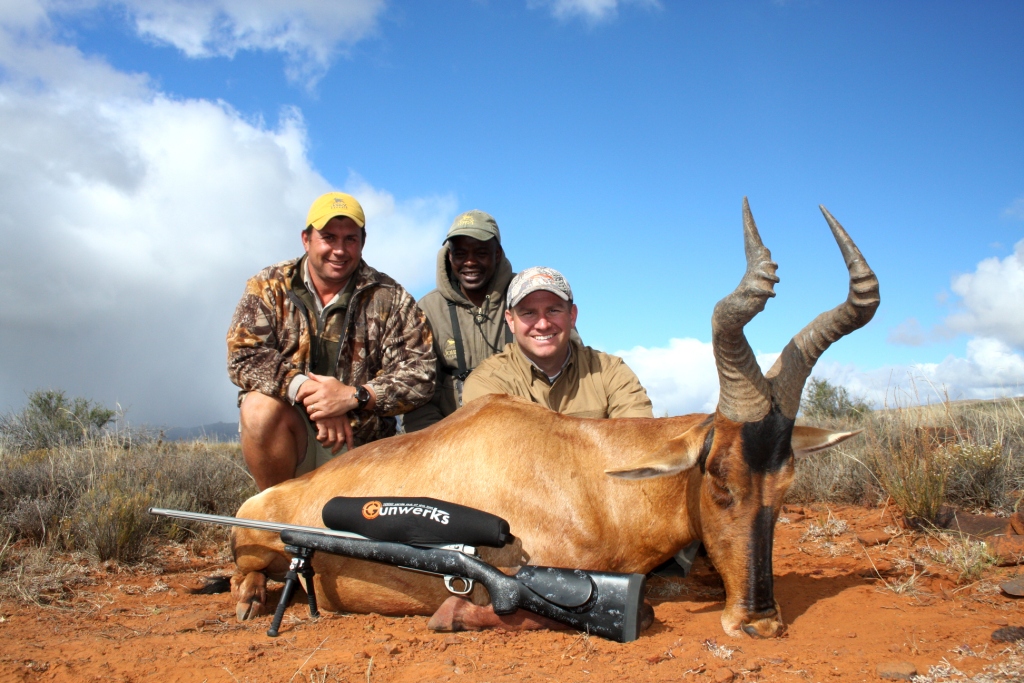 Gunwerks professional, Garret Wall, experienced Africa for the very first time with head Professional Hunter, Greg “Roy boy” Hayes. Garret proved to be a wealth of knowledge on the shooting system and watching him operate was a privilege in itself. 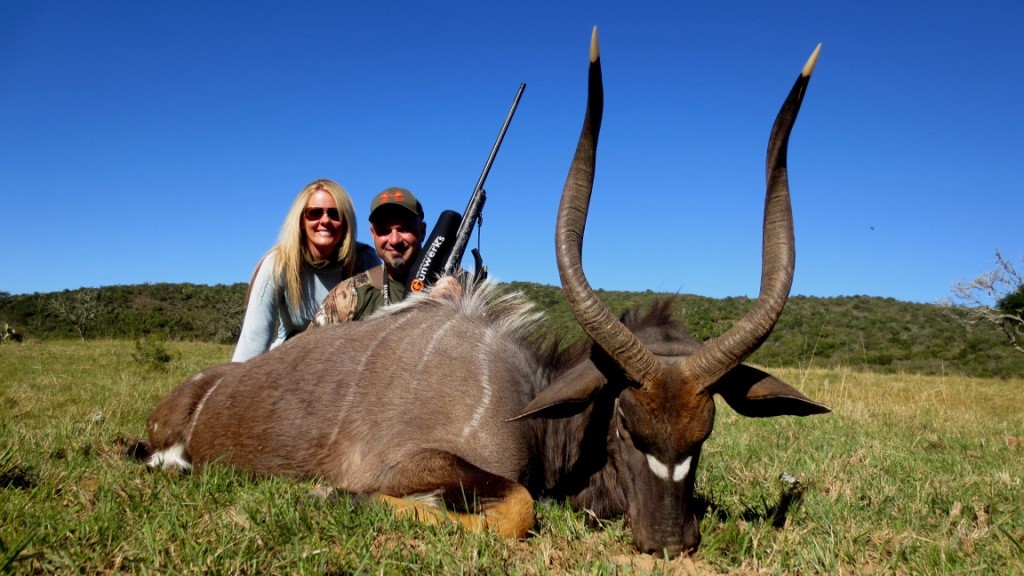 Chad and Jennifer Fraughton teamed up with Juan MacDonald for their first taste of Africa too. Chad proved to be a wealth of knowledge on the system, and could be mistaken for a professional shot from Gunwerks. The man was a master and one of the most important team players in the group. 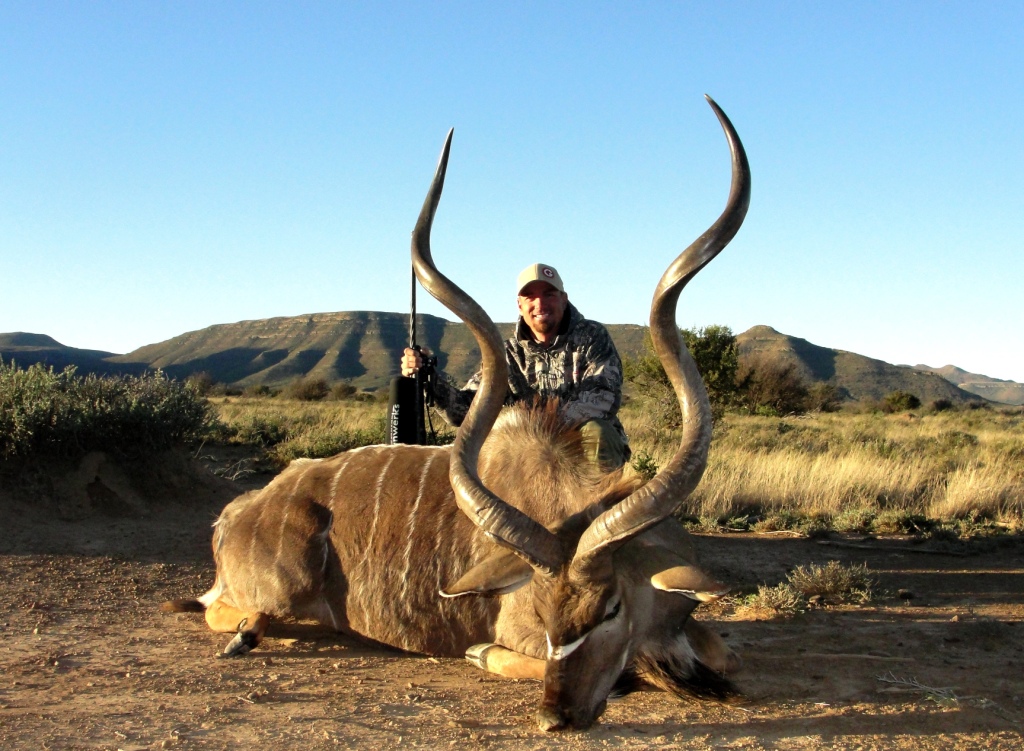 And our old friend, Kregg Thomassen, joined me for his third trip back at John X Safaris. He had made a true “hog” of himself when it comes to big East Cape Kudu on both his previous hunts, scoring with a top 5 Kudu of a lifetime on his second hunt. That bull was a particularly narrow bull; this time around he lucked into another monster at 450 yards. The trackers now refer to him as; “Kudu King”, and his rifle as “The magic stick”!

In all more than twenty trophies were hunted by the four hunters at varying variables and distances – all a challenge in their own right. But that was not as impressive as the fact that not one single animal had been wounded and needed tracking down. This not only proved that the Gunwerks system was one which could be mastered by anyone, but that the system had covered all the bases from the caliber, to the optics, and the ammunition. It had without a doubt proven itself in Africa.
Many months later, after the dust had settled and the Gunwerks group had departed the African continent, I revisiting our experiences and got thinking about long-range shooting in the hunting world, and particularly in Africa, as that is where I’ve gained my experience. It was at a time when I was writing about my experiences with a dear friend of mine, Lee Friend, whom had first told me about Gunwerks. 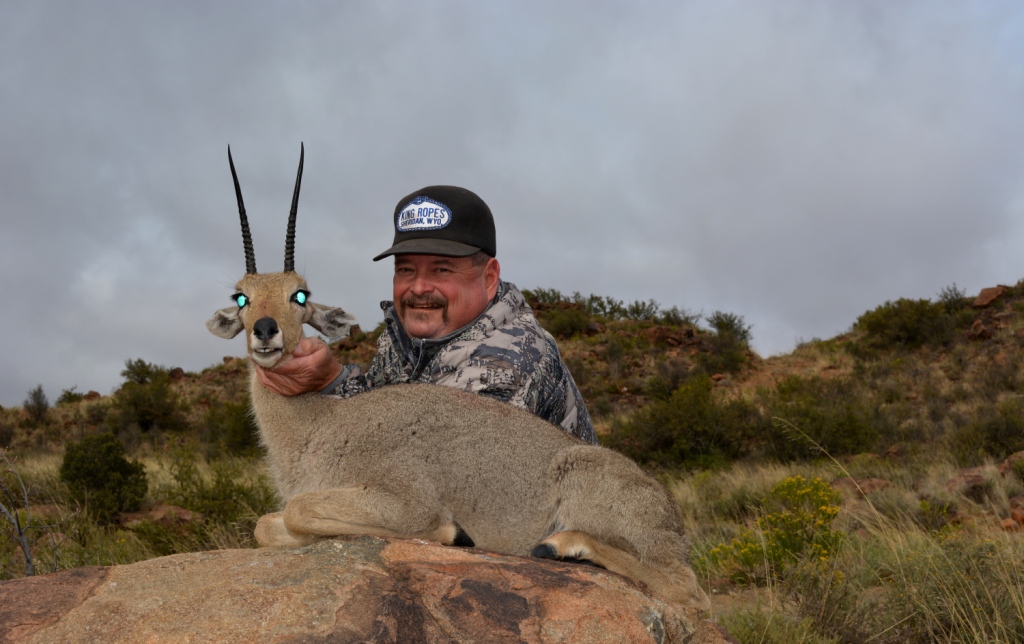 I started off that particular article questioning long-range shooting and the ethics surrounding it. And as the story unfolded and I relived those adventures through the words flowing freely with excitement on the screen in front of me, it is then that I realized I had answered my concern and put any doubt to rest.
In saying that if any reader would like to read about that particular experience with Gunwerks rifles, feel free to visit; “Against all odds – the man without hips….” @ http://johnxsafaris.wordpress.com/2013/07/10/against-all-odds-the-man-without-hips/ Upon reading the story of that safari I’d like to leave it up to each individual to decide, I know I’ve certainly made up my mind on the matter.

Looking back on my experiences over the past 18 months, one thing is for certain and that is that Gunwerks has pioneered us into virgin territory when it comes to long-range calibers and hunting. Who knows what the boundaries may be? As long as those boundaries are ethical and both hunter and guide understand their equipment’s’ capabilities, then I predict exciting times ahead. Gunwerks has most certainly taken the African continent by storm…
For more information and current updates about John X Safaris; follow us on Twitter, connect with us on Facebook and visit our Website!