Rising well before dawn, still living off the previous day’s excitement, we headed out to a set of mountains just east of camp. As the crow flies it was a mere three miles to the base, but a Land Cruiser doesn’t fly, and so we crawled and bumped our way along until we reached the foot. All of us were on cloud nine, still in awe at the Vaal Rhebuck we had harvested, with Steve still boasting a smile from here to Cairo.
Having enjoyed watching Hunter, Steve’s son, come through the ranks on our previous safaris together, it gave me great pride knowing both Steve and I had worked hard at instilling great ethics when it came to Hunter in the field. 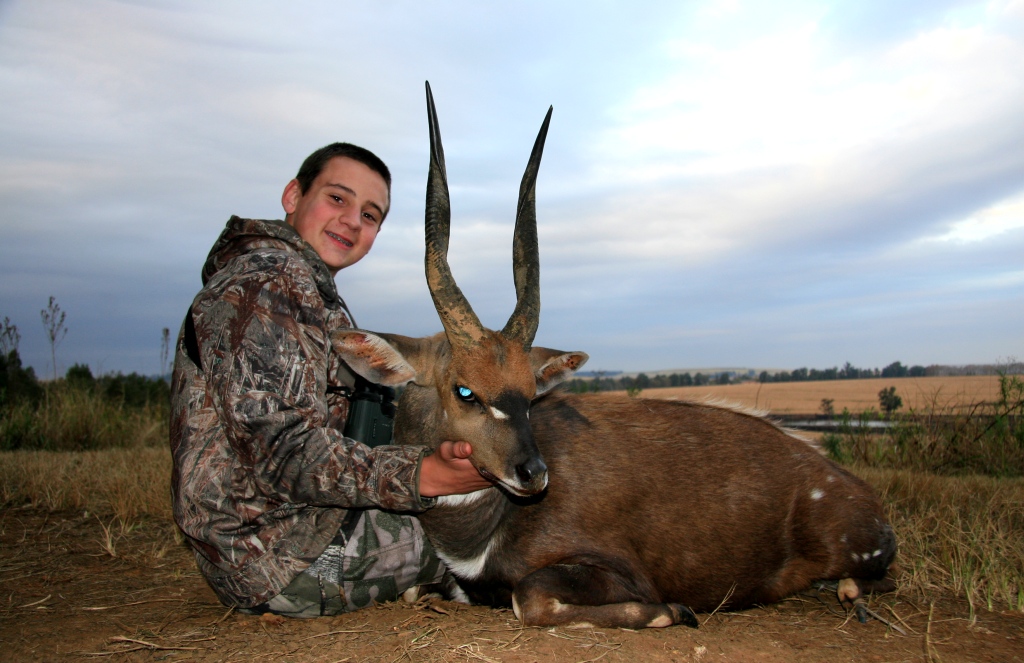 We had always enjoyed our fair share of luck when hunting together, none more so than our hunt for Cape Bushbuck in July of 2012. That particular ram was the most magnificent ram I had ever seen, and since have not seen one more impressive.
This time round we had discussed a couple of specie options with Hunter. Zwayi and I knew of a massive old blue Eland bull we had spotted on a recent hunt in a set of hills not far from camp, but Hunter wanted a mountain challenge. Which had brought us to the foot of massive mountain at the end of a bumpy track. 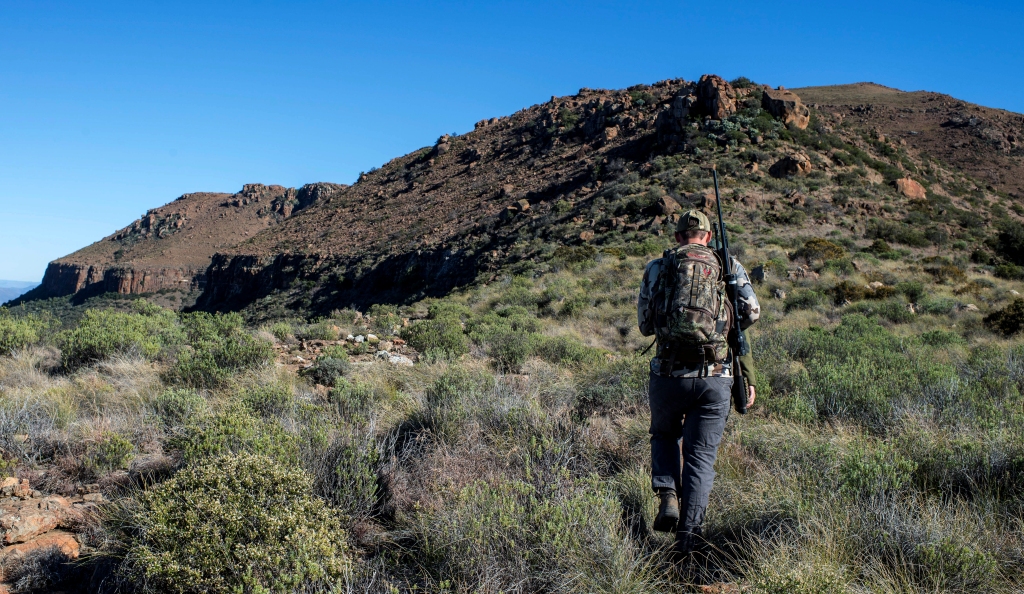 From there we set off on foot in search of Klipspringer – one of the most exciting species to pursue up in the high country.

Ozzie our GTS Productions Videographer joined us for the hike, bringing along his still camera capturing every shot along the way. 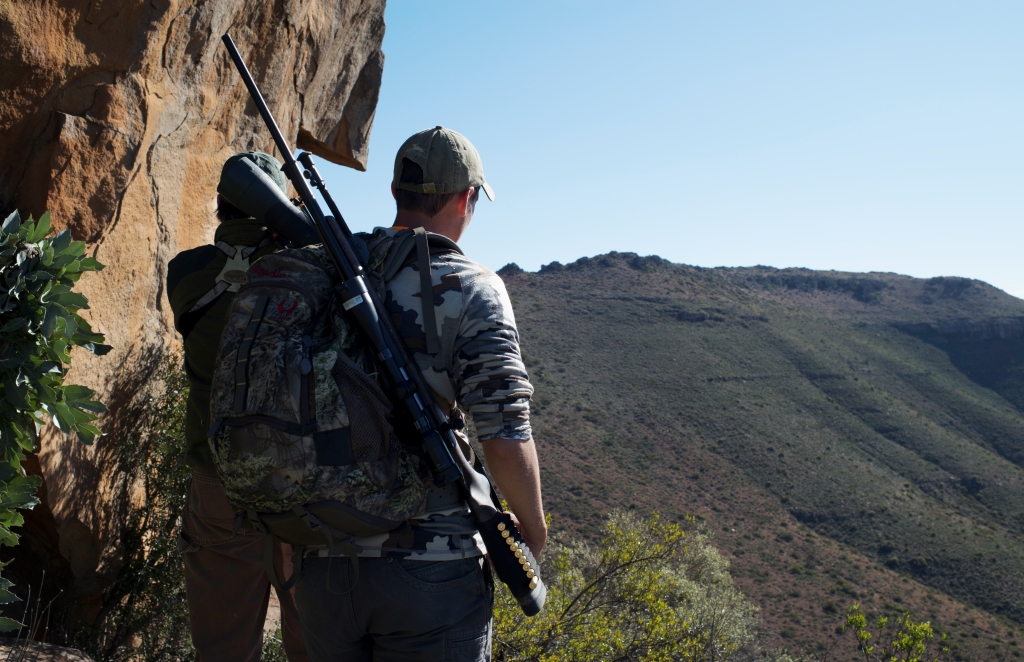 And WOW! It was beautiful!

We had spotted a pair of Klipspringer enjoying the first rays of the morning sun high above the cliff line, closer to the peak of the mountain. 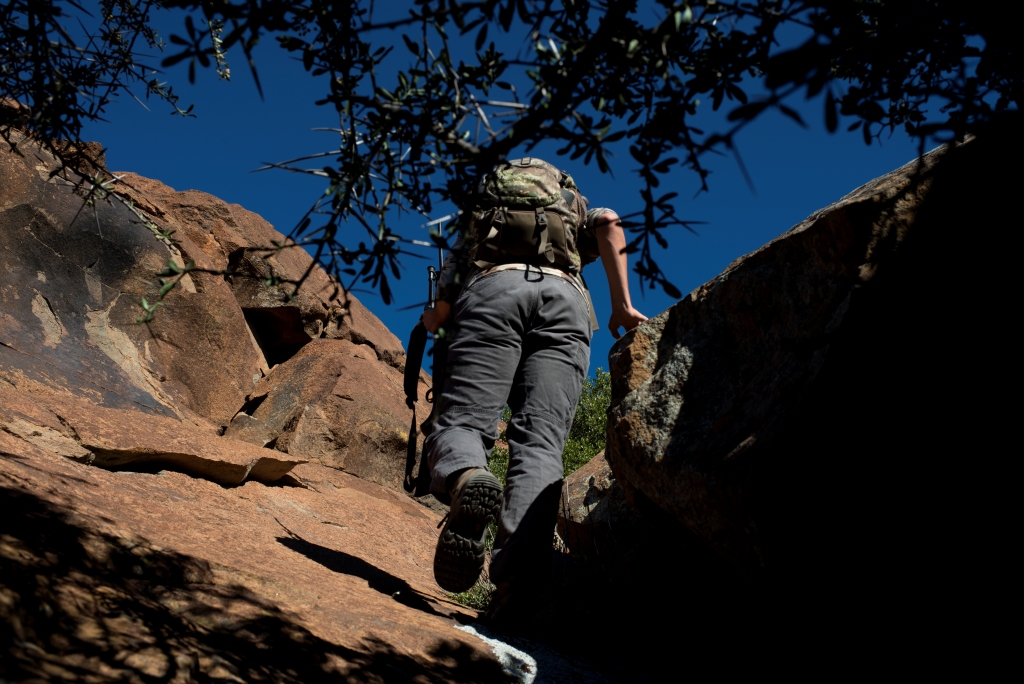 They were too far to judge at that distance, so we asked Steve and Zwayi to keep an eye on them while we tried to close the distance. 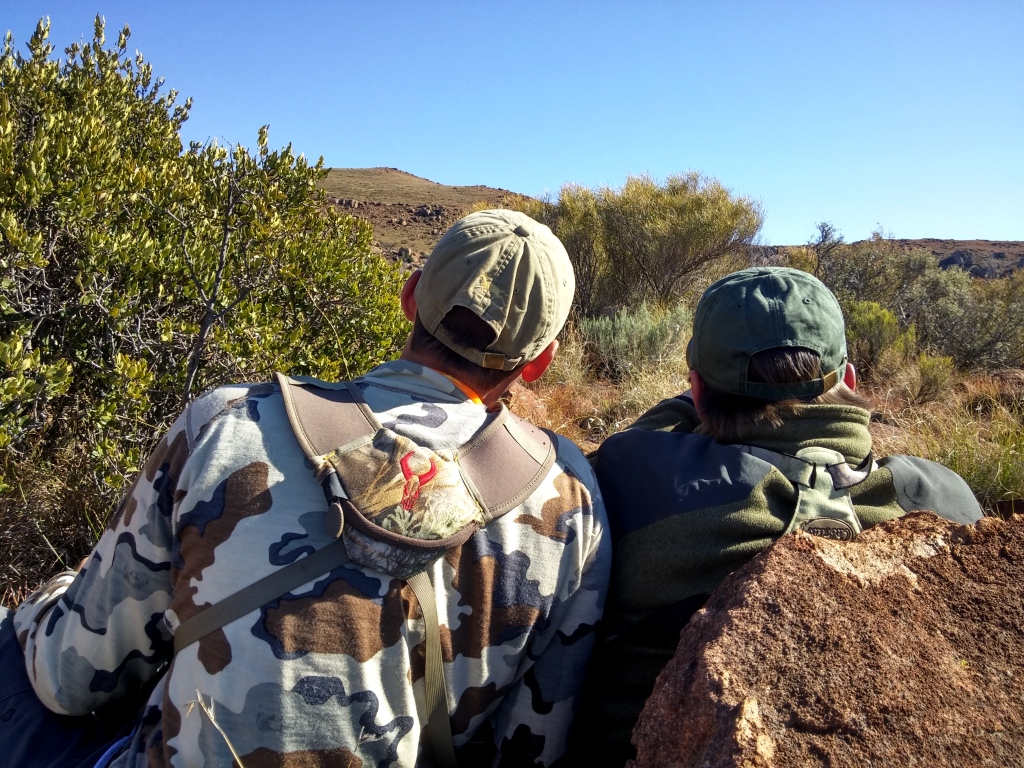 Within hours we had them spotted, but the pair was still 457 yards out…

We discussed a number of options, knowing full well we were gambling from here on in. We had reached the edge of cover and 457 was a long shot on a target that small. And then suddenly the Klipspringer forced our hand. One minute they were feeding without a care in the world, and the next they were bounding along the ridge to a higher point before coming to a halt. The male immediately started feeding, as the female took up a sunny position on a large boulder. I looked around for further options to close the distance, but there were none.

Hunter, never one to shy away from a challenge, dully took up his position to make the shot.

At the crack of the shot the Klipspringer took off along the ridge having dodged the first shot falling low. Hunter re-chambered and squeezed off another just as they came to a halt between rocks, this time the bullet hit wide. Miss again. I explained to Hunter where his shot had landed, and once again he re-chambered. Again the shot just missed by mere inches. By now the animals were at 550 and I cautioned Hunter to consider the next shot. He gave me that look I had seen before, re-gathered himself and squeezed of the most perfect shot I had seen at 550 in a long time. 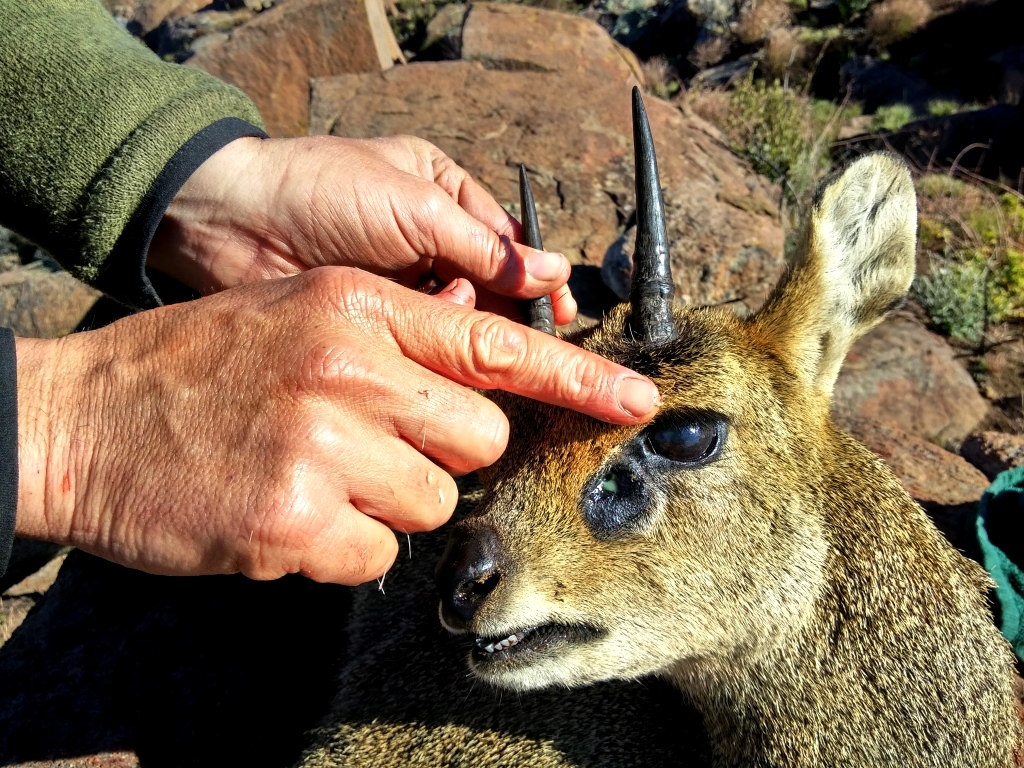 Reaching Hunter’s Klippie, still not completely certain of its quality, as things happened fast, and sometimes one just follows ones gut, we were relieved to find a magnificent old ram. His secondary growth was immense – the true sign of an old warrior of the mountains.

We took our time to study Hunter’s downed Klipspringer before taking an array of pictures high above the world. Then we gutted the ram and loaded it into Hunters back pack for the descent. 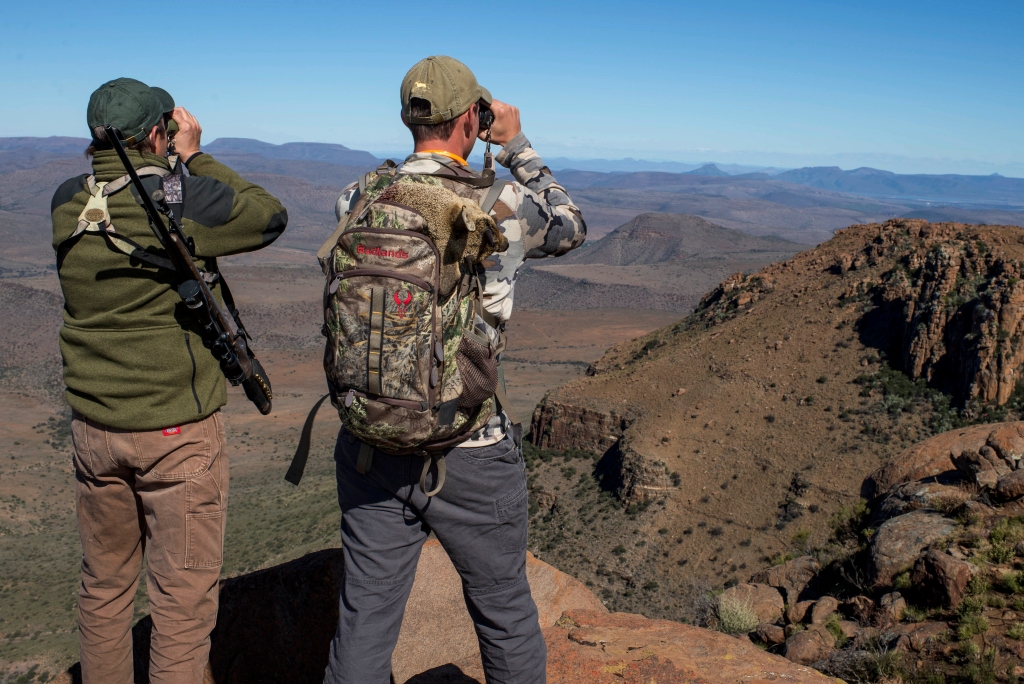 And then one last moment was taken to enjoy the view and savor the moment before heading back down to the rest of the team.

The following morning we headed south, back towards the coast and our base at Lalibela. Along the way we stopped off at Bankfontein, a famous property in our part of the world, previously owned by Peter Flack, the renowned writer and hunter.

Peter had invested in Cape Mountain Zebra, very similar to ourselves, but had done so some 15 years ago, and since have seen the population more than double to reach a sustainable off-take. We at John X Safaris had never before hunted one of these Zebra, and duly set off with Steve into the unknown.
We made it quite clear to Steve that there was no legal procedure for him to import the Cape Mountain Zebra trophy into the United States, as US Fish & Wildlife still to date has an import ban in place. Steve understood the situation at hand, but still wanted to hunt the Zebra. An approved permit by our South African Nature Conservation authorities ensured the hunt was a legal one, but then the wait would be on to see how well our friend, John Jackson, could do in Washington as to keep fighting the good fight in getting the ban lifted and removed altogether. We have been able to hunt and export Cape Mountain Zebra to Europe, Mexico, and Canada, for many years now, but still US Fish & Wildlife will not accept any of these fantastic specimens as trophies. We can only hope they would come to their senses sooner rather than later as to understand the importance of sustainable utilization for the future of the Cape Mnt Zebra.

We ended up hunting a massive stallion late that afternoon after numerous foiled attempts on these weary critters.

Now the wait would be on for Steve as he closely follows developments headed up by the various hunting organizations in the US, hoping for a change in law as to finally have his Cape Mnt Zebra proudly displayed in his trophy room. Until then he will be proudly displayed in my office as to be enjoyed by all, and to further create awareness of the good work hunters continue to do for conservation each day out in the field.
For our last day on the coast we continued on with a tradition started many years ago with the Robinson’s. It would be a day of opportunistic hunting. I opted for an area boasting fantastic Warthog, Bushbuck, Kudu, Nyala, and Blue Wildebeest. None of them in any particular order, but all great to hunt.

By mid-morning the sun was starting to push the spirals back into the forest and we had not spotted a pig worth writing home about yet, so we opted for taking a closer look at a herd of Blue Wildebeest. Having closed the distance between us and the herd to 120 yards I edged Hunter forward onto the sticks. “Take the bull on the right, quartering us slightly”, I whispered in his ear. The shot rang out and the herd stampeded off in a storm of dust. We called in the dogs for back-up.
Bongo immediately took off at a pace with Chili in hot pursuit. We gave them the standard five minutes or so before starting our search for blood. We picked up the blood trail and headed in the direction where we had last spotted the dogs and Blue’s disappear in. After some time the dogs returned, clearly having lost the bull’s scent among the many other hooves of the herd.
We worked the blood trail slowly, finding a small drop from time to time. Each time Bongo would race ahead, as if he had found it, but each time he returned, working harder to find the scent he was after. In all this time Chili seemed to enjoy the role as an observer learning from the older experienced dog as much as she could. From time to time she would work as hard as any dog I’ve seen scenting before, nose flat to the ground, and veering off to our right into the adjacent forest leading over into a large gorge. After a couple of times, and not having much luck on our trail, Zwayi finally couldn’t take it much longer and decided to take a closer look – giving her the benefit of the doubt. Turns out Chili was no longer observing, she had the trail, but not the confidence to pursue on her own. We called Bongo off his scent and put him onto the correct one.
Within minutes all hell broke loose, as the dogs came into full voice in the gorge below. They had clearly bayed the bull, allowing us to close the distance for a finishing shot. Nearing the chaos in the undergrowth we edged forward until all came into view a mere 15 yards ahead of us. Hunter picked a gap in the undergrowth, being mindful of where the dogs were, and touched off his follow-up shot. The bull turned and stumbled over the dogs before gaining momentum once again down the ridge. One could hear the dogs chasing in hot pursuit, stopping from time to time, as the bull turned to fight. 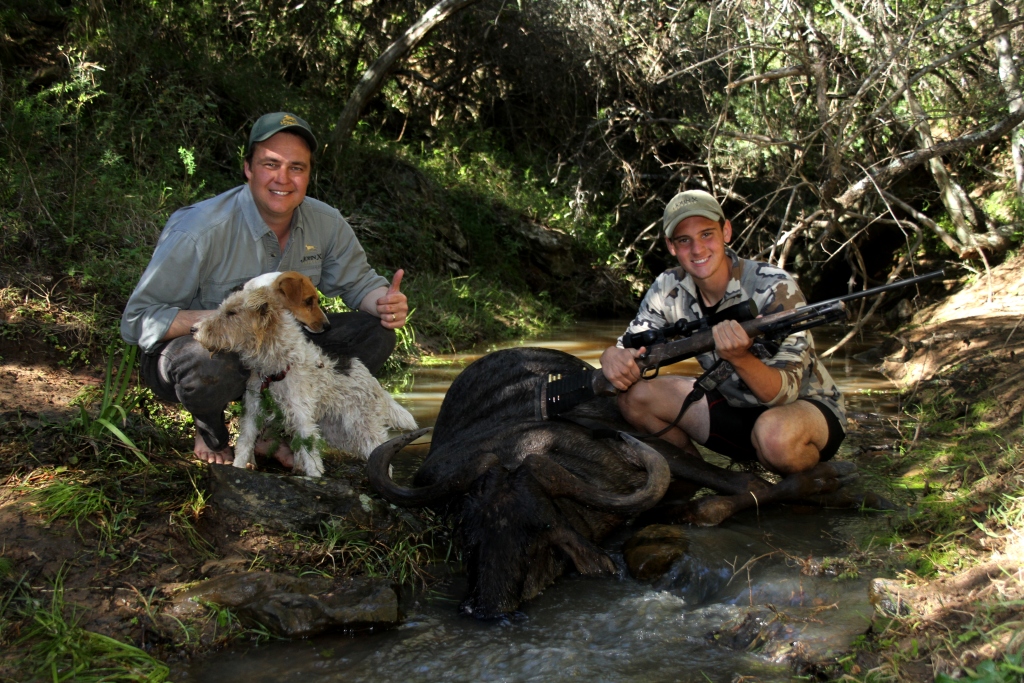 Finally two miles later the dogs bayed the bull in a small stream. Hunter crept to the edge above the stream and put in the final shot, bringing one heck of an exciting hunt to an end.

What a hunt our short unexpected safari turned out to be. When we had last seen each other in early February at the end of SCI’s annual convention, there was no way or manner possible for the Robinson’s to have squeezed in a trip to Africa during 2015. And look at us now…. 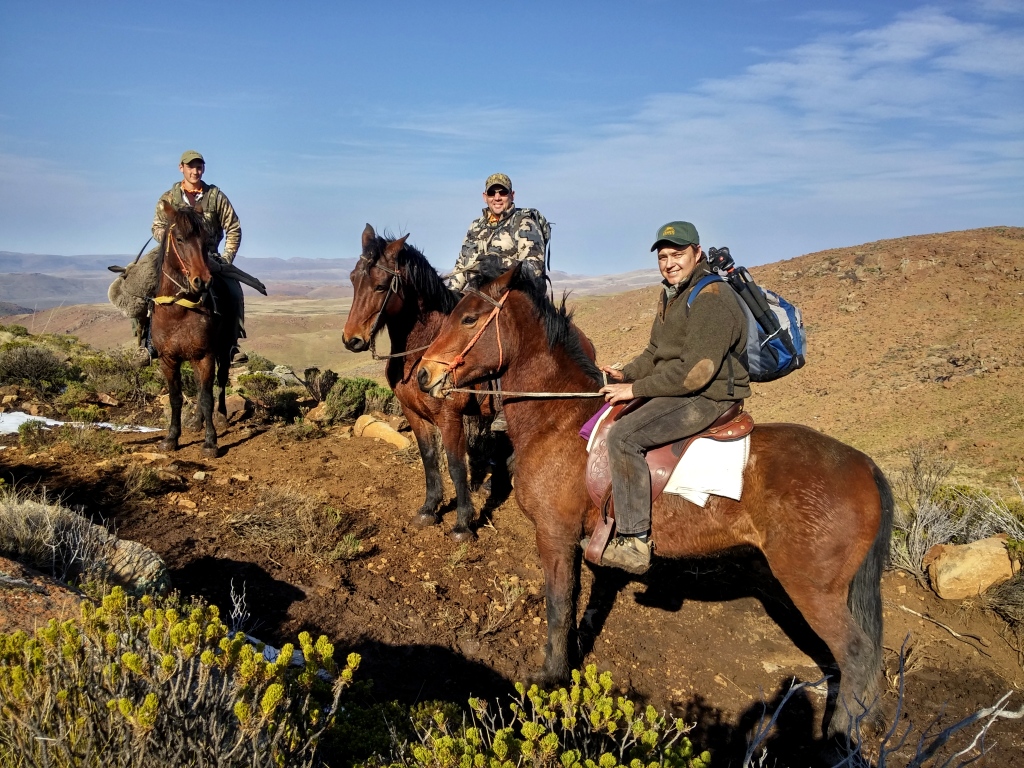 Take the opportunities life presents you and do the things you’ve always dreamt about. You never know how things will turn out unless you go. Who knows? You may just find yourself sitting on a horse in Africa, with a view like no other, sharing a hunt with friends for the trophy of a lifetime…. 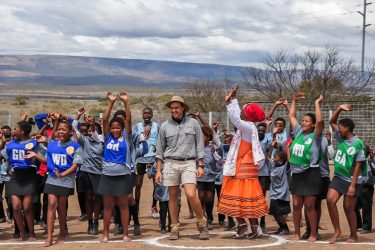