Over the course of the past 15 years John X Safaris has been involved with a number of producers, presenters, and film crews working in the outdoor industry. We have enjoyed fantastic moments captured by highly skilled cameramen and presented by world-class hosts.
This season we welcomed back our very good friend, Mike Rogers, on his third hunt with John X Safaris shooting the new season of SCI Expedition Safari. 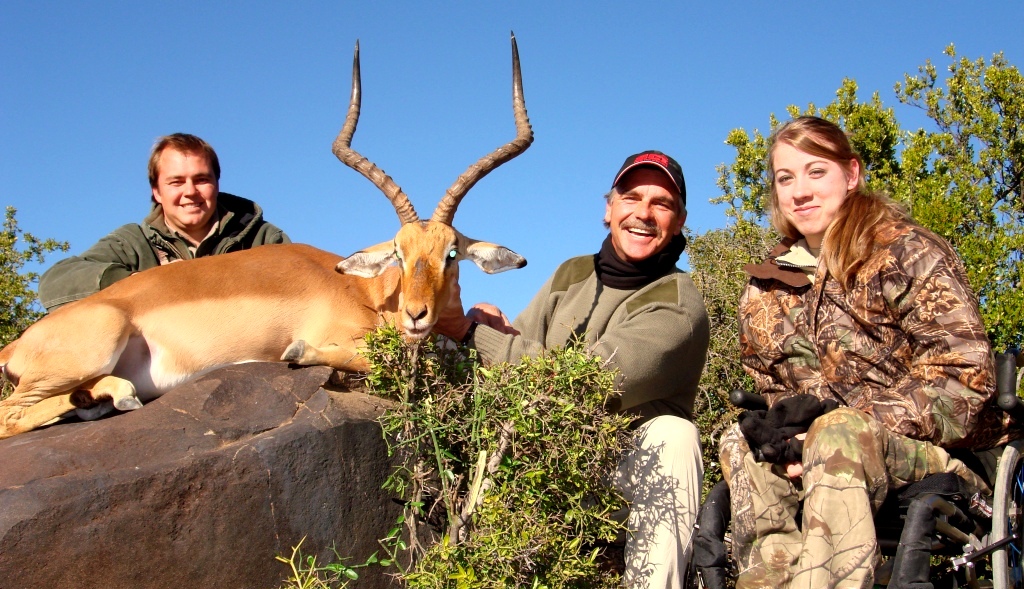 On a previous hunt to John X Safaris, Mike and his crew teamed up with Professional Hunter, Carl van Zijl, together guiding wheel chair bound, Kori Wilkerson, on her first hunt to Africa.

It goes without saying that no matter how good the areas, the safari staff, and Professional Hunters, one requires a fair amount of luck. More importantly, one requires a like-minded presenter and cameraman willing to push that extra mile. Words cannot describe the professional manner in which presenter, Mike Rogers, and cameraman, Mike Law, conducted themselves. Both these gentleman came onboard with open minds – with one goal in common. “Produce a show with a difference!”
Mike’s safari was split in two. He first joined Professional Hunter, Carl van Zijl, on the hunt for Klipspringer and Cape Eland from our Northern Area in the Great Karoo. 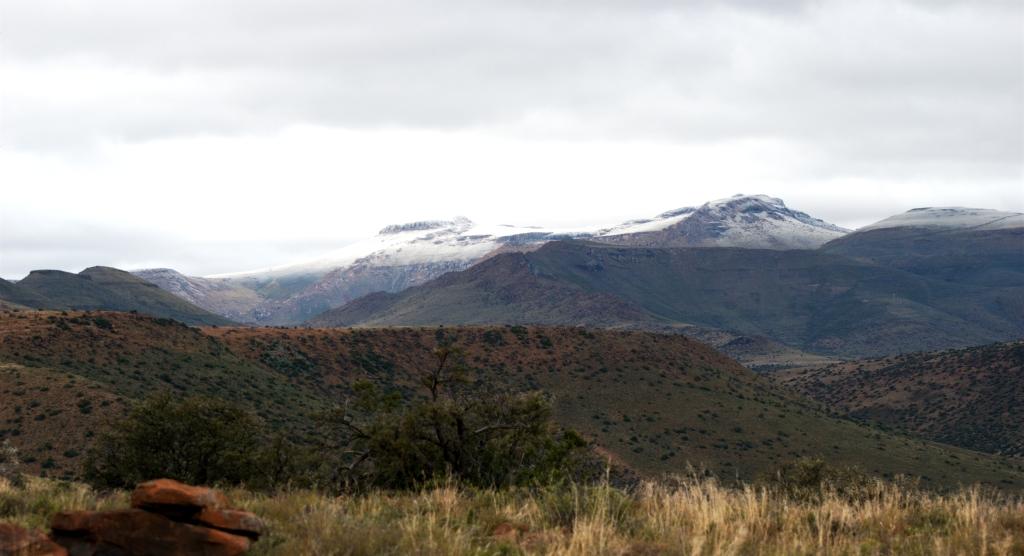 Having arrived in the north, it was obvious that this safari was going to be a cold one. Wind swept off snow-capped mountains and there were signs of more rain on the way.

As cold as it may have been, the team was determined to find game and get the hunt underway. We only had 8 days. Every second was going to count….

Our aim was to spend early mornings glassing the mountains for Klipspringer, hoping to find pairs sunning themselves in the first rays of the morning sun. Some mornings we found as many as 12 pairs, but for one reason or another we never got the perfect opportunity we were after.
By day 3 in the north we still had naught to report. Mike, our cameraman was not overly concerned, he had been capturing hours of extra footage, which would come in handy much later. Both Mike and I knew our chance would come; it was only a matter of time.
As we rose to our last day in the north, the pressure was on. I knew my area well and knew that we had been extremely unlucky up to that point. Both Mike and I had a good feeling about the day ahead, when Boy spotted a great Klipspringer within 30 mins, the hunt was on. 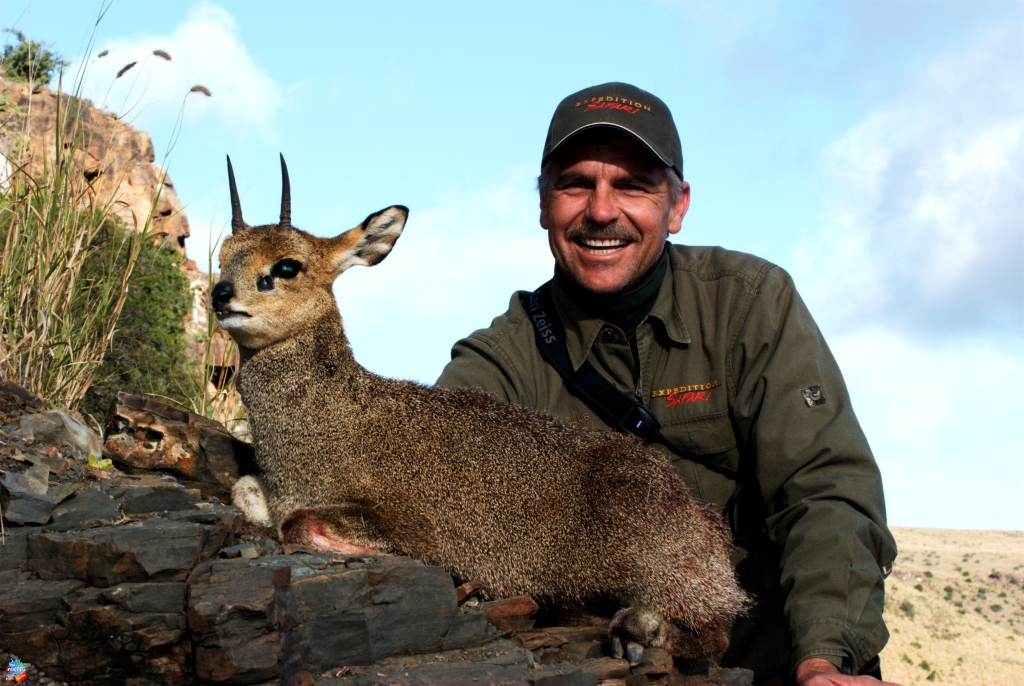 The Klipspringer was 700 yards above us feeding along the edge of a rocky bank. We gathered our gear and started our hike. Our plan was to use some blind ground between us and the Klipspringer, finally coming over an edge about 200 yards below their position. Our plan worked like a charm and Mike pulled off a textbook shot on a beauty of a Klipspringer ram.

What made the hunt so fantastic was the way in which the hunt was captured on film. Never did Mike or I notice the camera, neither did the Klipspringer know of our where a bouts right up until the very last-minute before the shot. Seeing Mike, our cameraman, operate his camera was an experience within itself.
After our successful Klipspringer hunt, we started concentrating on Cape Eland. We had spotted over 200 Eland in the course of 4 days. We had looked over a number of good bulls, often getting to within shooting range of great bulls. On more than one occasion we were ready to squeeze off the shot, when rain would come bucketing down, sending us squirreling for cover with the equipment. One quickly became aware that if something happened to the cameras, there would be no show at all. It wasn’t like we could buy a similar camera in the East Cape, let alone the entire South Africa. The crew handled the equipment like new-born babies.
At noon on that last day we spotted a group of 5 Cape Eland bulls in the distance. I remember telling Mike, that if we could see a dewlap from a mile off, it pretty much meant we were in for business. This is what we had been after. Just a little bit of luck and a break in the weather, that’s all we were asking…. 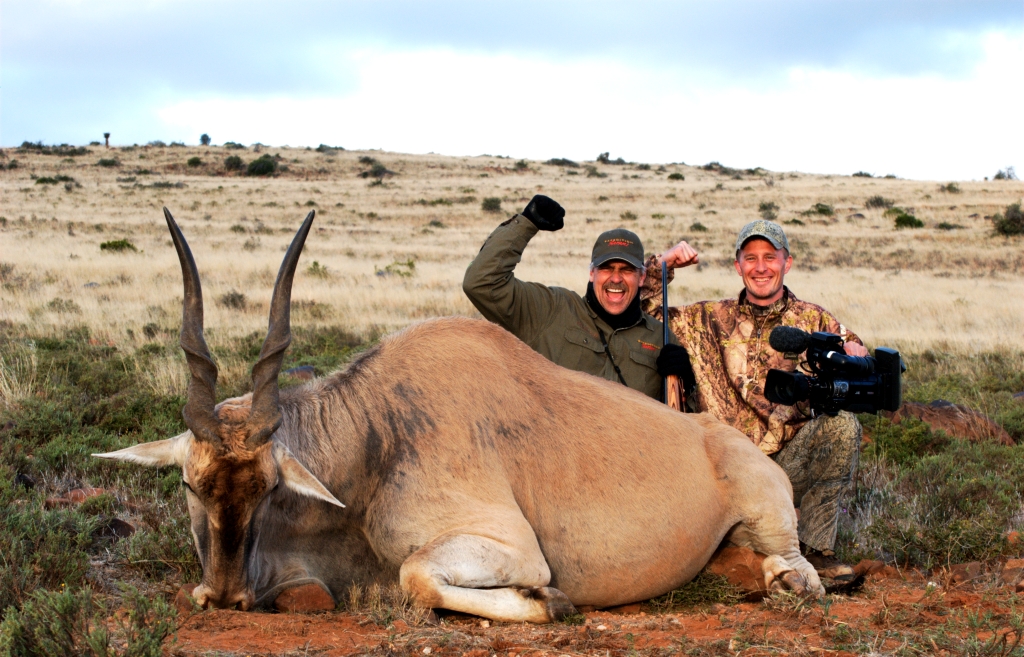 We took our time, decided that the long way around the mountain would be the safest option. We edged onto the plateau where we had last seen them feeding. There they were, a mere 140 yards away. We leopard crawled our way into our final position and checked with Mike if the camera was rolling. We received the thumbs up and settled onto our bull. If only we knew how long the wait would turn out to be. There were 5 bulls from our first count, 4 were feeding in the clearing below us while our bull, number 5 was hidden behind thick brush. Twenty minutes soon turned into and hour, we were still waiting patiently. At one point we decided to change positions for the third time, but decided against it with the Eland at such close quarters. Mike’s bull finally stepped out a 100 yards further, and the rest could be considered history. The cheers, smiles, and excitement gave our old bull the send off it deserved. What a hunt! What a trophy!

Day 5 saw the crew gather its belongings, Carl was off on another adventure, and Mike would be joining his old partner in crime, Professional Hunter, Gary Phillips. They would return to the same area as 5 years previously and continue on the hunt for East Cape Kudu. They were determined to take their chances this time round.
While not giving away too much, we’re going to let you wait. How exciting would it be if we gave away the entire adventure before the show has begun?  What we can say is that we captured the true essence of life on safari with John X Safaris. The hunting was as good as ever, and the friendships rekindled through endless hours in the field are what made it all the worthwhile for all involved.
John X Safaris has a first class track record on East Cape Kudu, and you all know Gary and his passion for hunting big Kudu in the mountains… 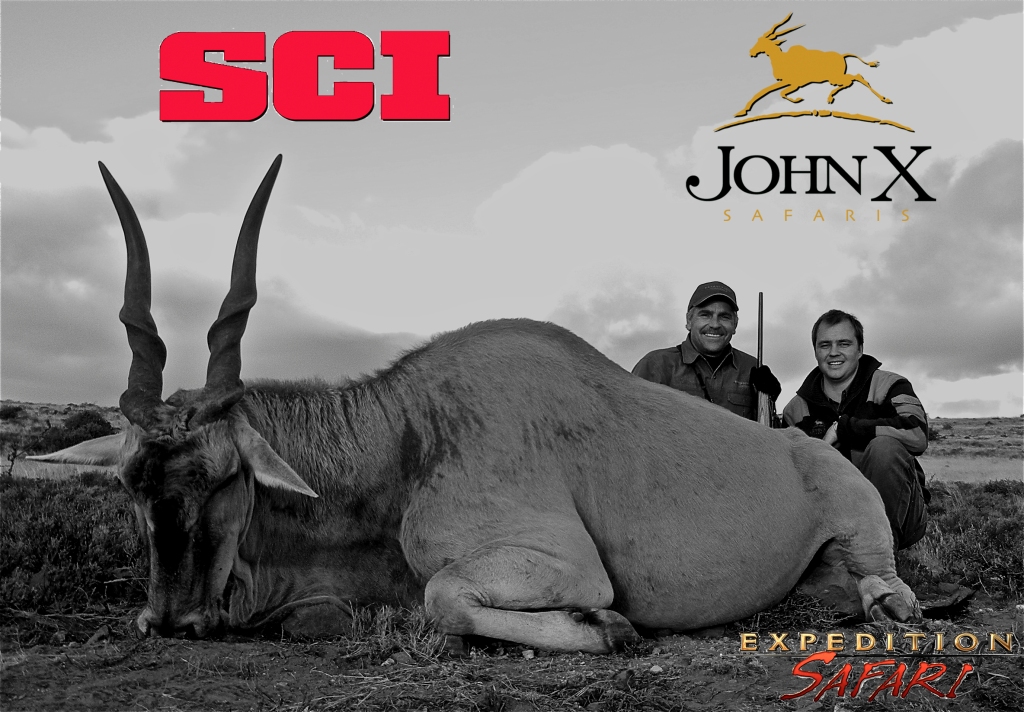 Watch this space – “When SCI Expedition Safari together with John X Safaris returns to the Outdoor Network.”