After spotting the numerous herds on the vast plains, Brad leant over and exclaimed: You’re not going to believe this, but it’s better than Christmas!

The past ten days saw long time friend, Dave Jensen, return on his second African hunt with John X Safaris.
On that first hunt he had been one of six guys in a group from Salt Lake City. This time round, Dave decided he’d invite along his wife, Connie, and sister, Beth, together with the Bateman family from Utah.
We had first started planning this hunt three years ago, but for one reason or another, we had never gotten around to finalizing any dates. So when the time came of their arrival, we were ready for a fun-filled action packed ten day safari.
For Dave, it would be a hunt with highs and lows, but certainly one which was truly memorable. He once again teamed up with Professional Hunter, Greg Hayes, on the hunt for a Springbuck slam in the Great Karoo.
The entire hunting party headed north from Base Camp that first morning. Some poor weather was threatening from the west, if we were going to hit the mountains it would best be sooner rather than later. 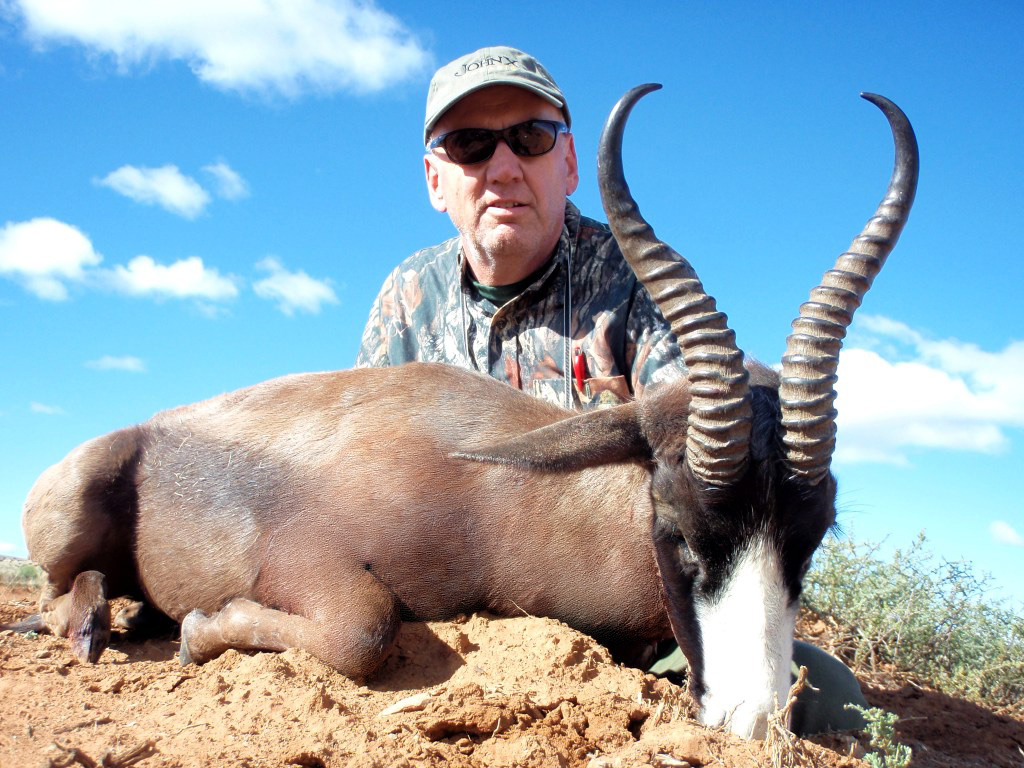 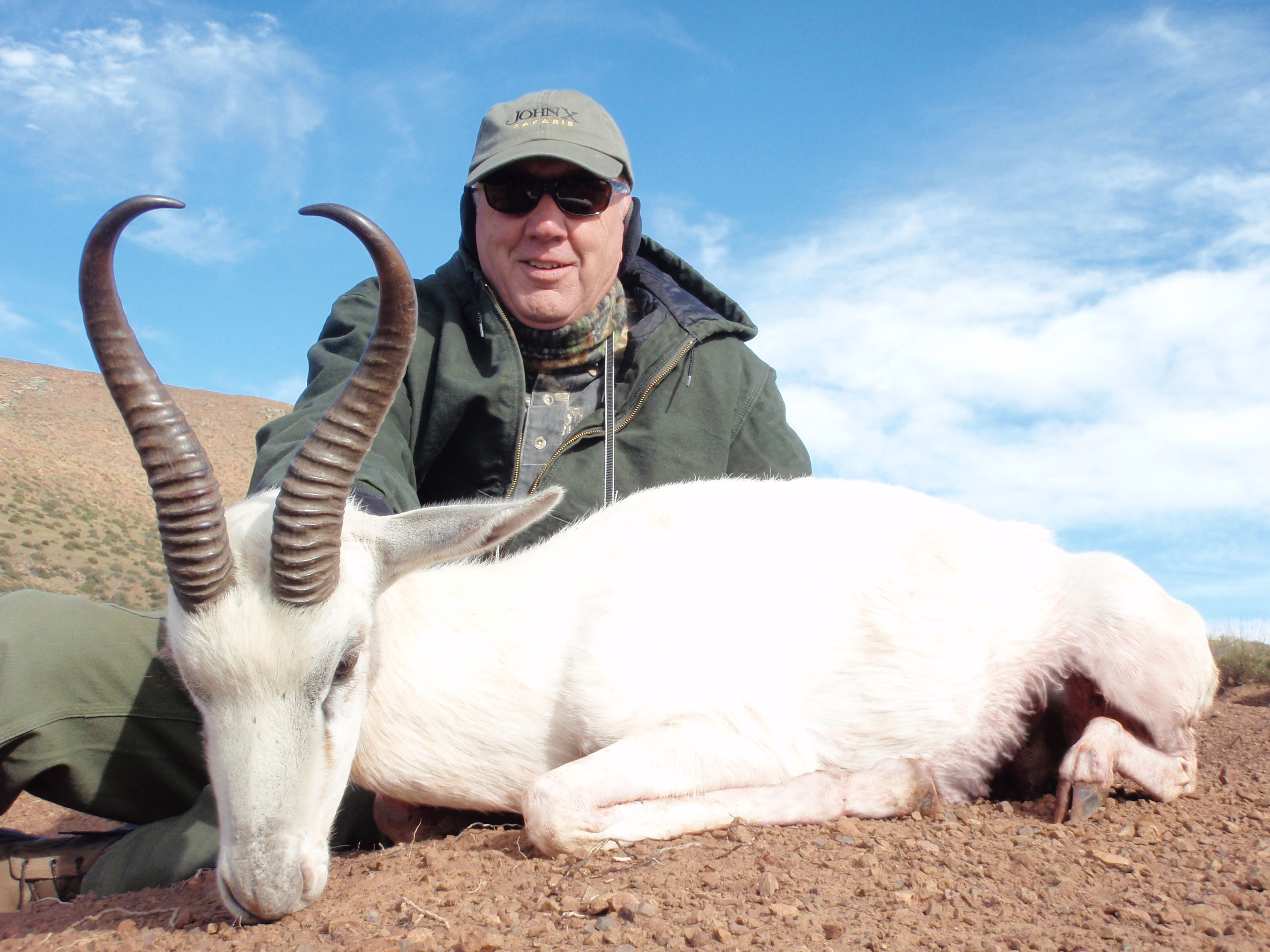 Dave soon followed up his Black Springbuck with this old White Springbuck.

Dave had previously heard and read about the Springbuck slam, which up until recently entailed the Common, Black and White Springbuck. With the ongoing efforts of a few extremely dedicated individuals, led by our good friend, Niel Schoombee, we have been able to offer our hunters a fair number of the rare Copper Springbuck. 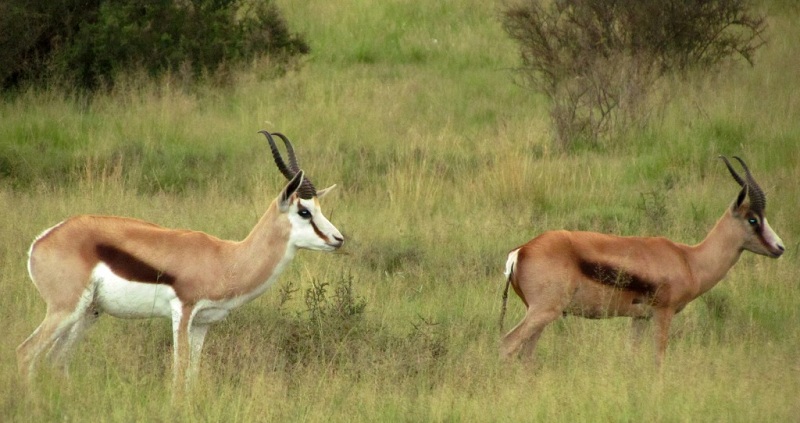 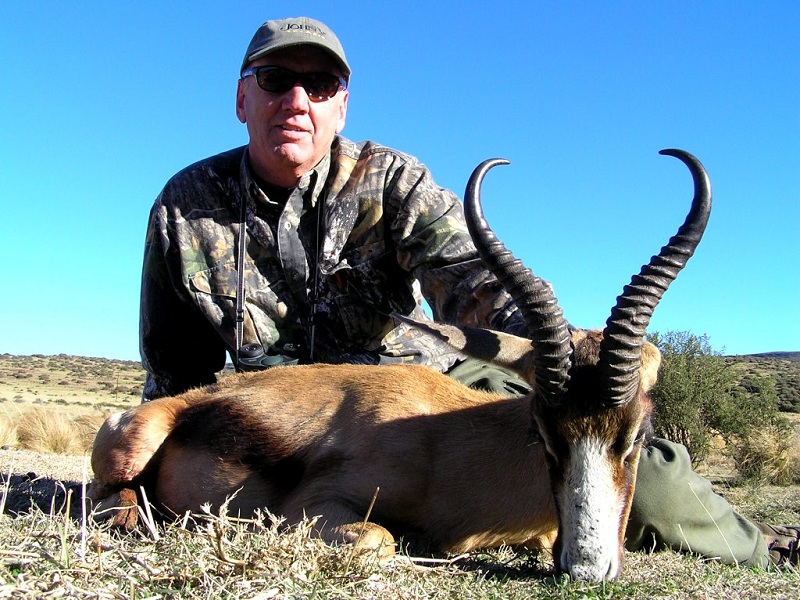 Dave was a happy man to have his prized Copper Springbuck in his hands, after a windy morning with numerous failed stalk attempts. A truly great ram! 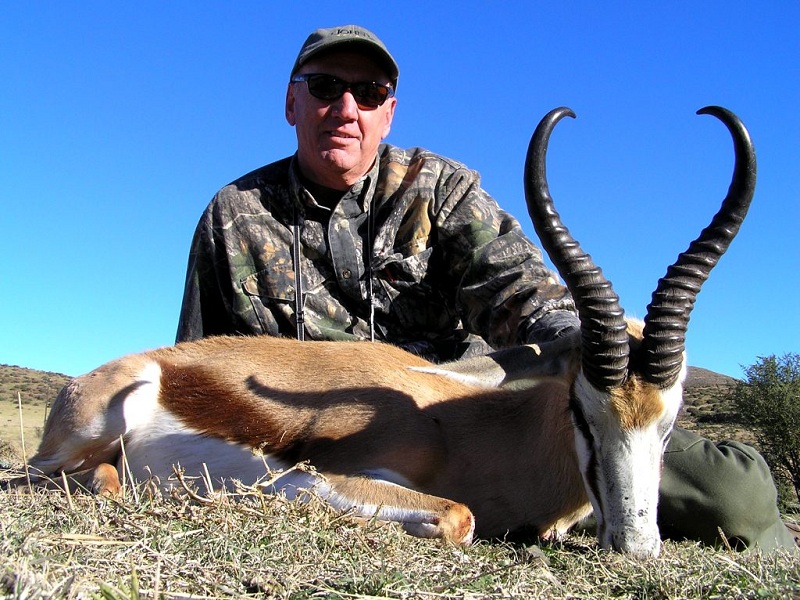 It doesn’t happen often, but the most common of all, the Common Springbuck, turned out to be Dave’s last Springbuck of the four in the Springbuck slam. I don’t think Dave minded, the very best was certainly kept for last. What a monster!

While Dave was reaping the rewards from a bout of good fortune in one of the best Springbuck areas in South Africa, the rest of the crew was hard at it.
Brad and Collin Bateman joined Professional Hunter, Carl van Zijl, while Steve and Karrie Bateman were on safari with Gary Phillips. Our hunting party was also extremely privileged to have along Mr. and Mrs. Bateman, joining the children and grandchildren on their first African experience. 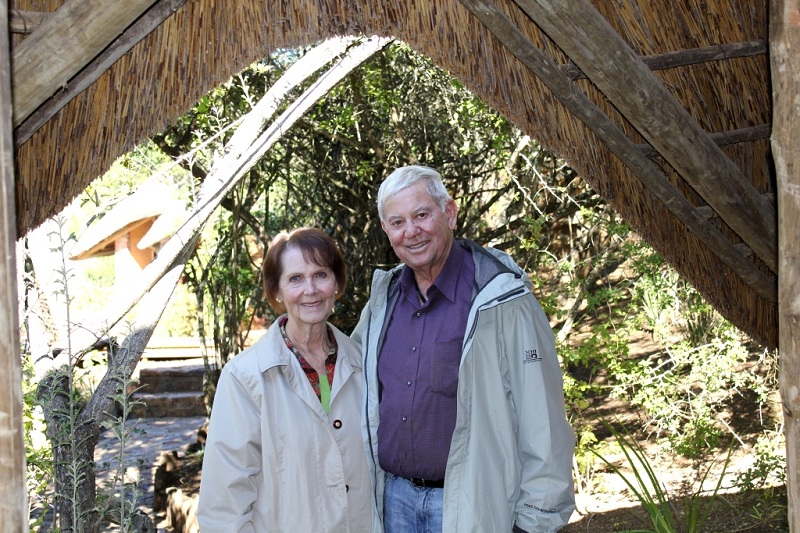 Mr. and Mrs. Bateman on safari with John X Safaris. It was a pleasure sharing the many great stories and wisdom from two very special people. 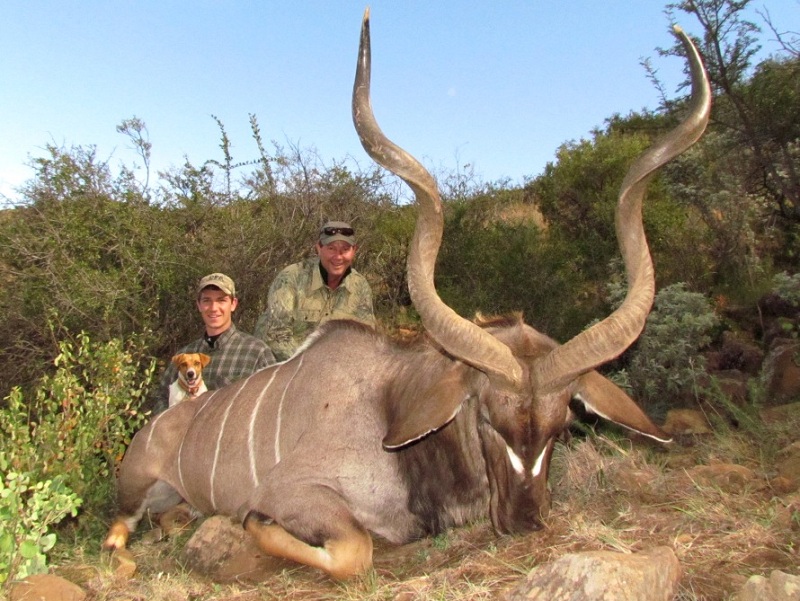 As with so many, an East Cape Kudu was Brad’s number one priority. We hunted hard that first day, spotted a number of bulls, but didn’t see anything that got us excited. We were up at the crack of dawn the following day and headed west from camp. Within an hour we had found a quiet pocket, sheltered from a cold gusting wind. We spotted a bull and took our time, always keeping a beady eye on the feeding bull. With 350 yards to go we were stuck. Try and pinch off another 100 yards and the bull may spot us, or take the chance. We found a good rest in the form of a rock and steadied Brad for the long shot. To our surprise the bull disappeared from sight and bedded down for the morning. This was our chance to close the gap. We duly did, got Brad into position again, and the rest is history. Brad, Collin and our Jack Russel, Bongo, savoring the moment.

Collin, who at first was dead set on hunting East Cape Kudu, soon started taking a keen interest in Gemsbuck. With their breath-taking beauty and vast herds, one cannot be blamed for being in awe of these majestic animals. 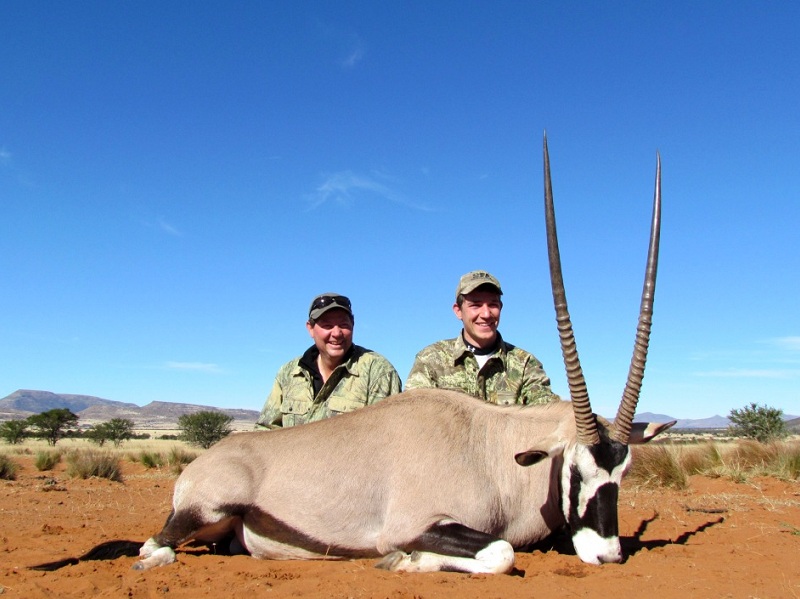 A clearly excited Collin, with his dad, Brad, and a good Gemsbuck bull. What a stalk it turned out to be, and then the world-class shot to top it off. Certainly one for the memories. 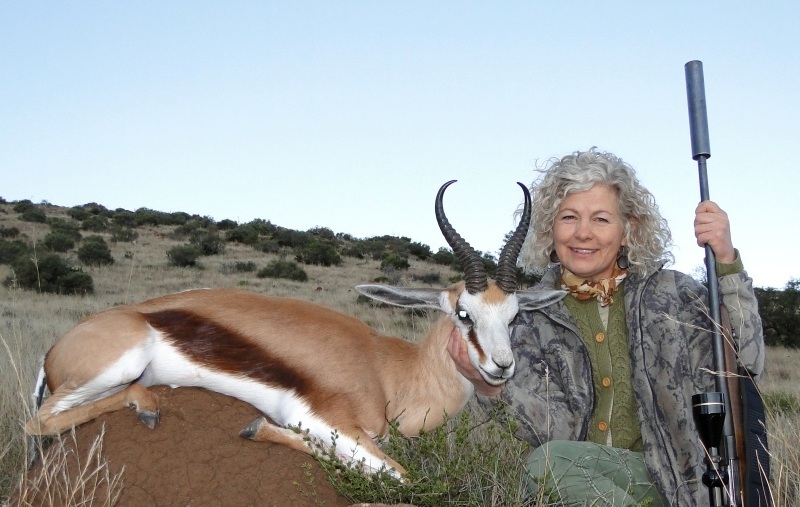 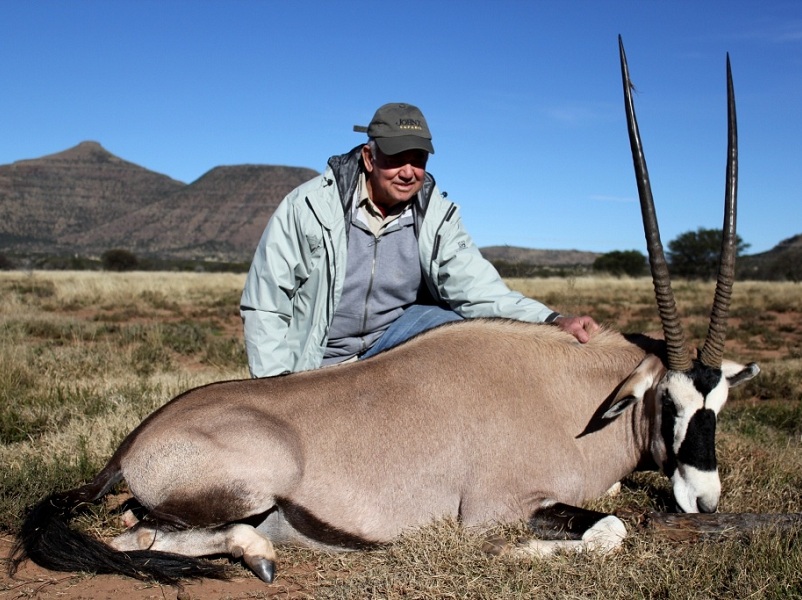 Mr. Bateman had joined the group as an observer, but expressed an interest in doing some hunting if the opportunity arose. He soon found out that Africa is filled with endless opportunity! Congratulations Mr. Bateman! 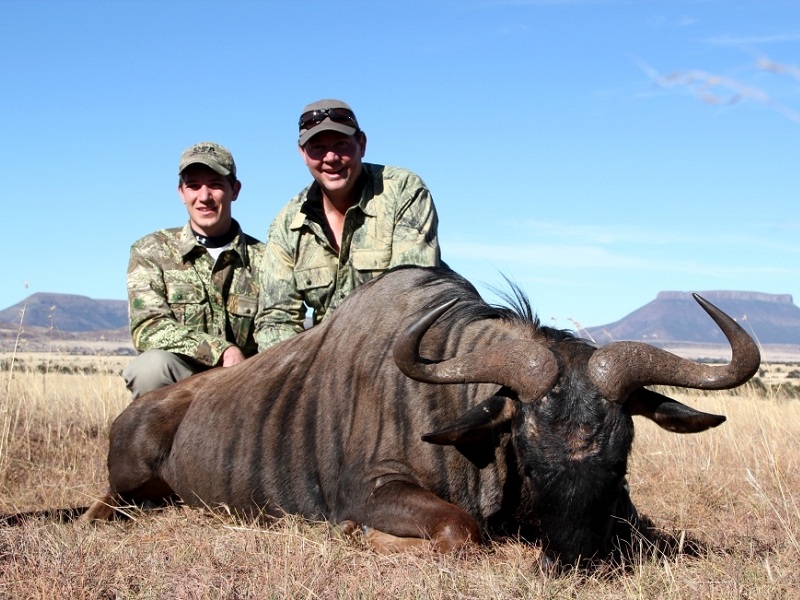 Brad was starting to get the hang of the opportunities that present themselves on a daily basis. After taking a long look at a bachelor group of Blue Wildebeest, he decided a Blue Wildebeest may just be his stand-in Cape Buffalo until he returns to Africa. 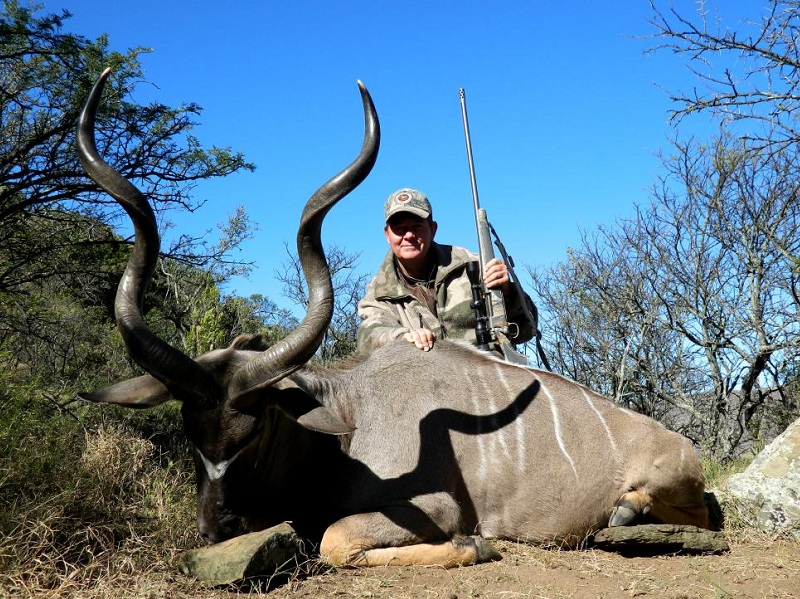 Steve in the meantime had been abiding his time well, looking over numerous Kudu bulls on a daily basis. He was after a great old bull with a big body and an oversized neck, one that would make you notice him immediately. Day four saw just the bull step out at the wrong time; of course it just happened to be Steve’s right time! 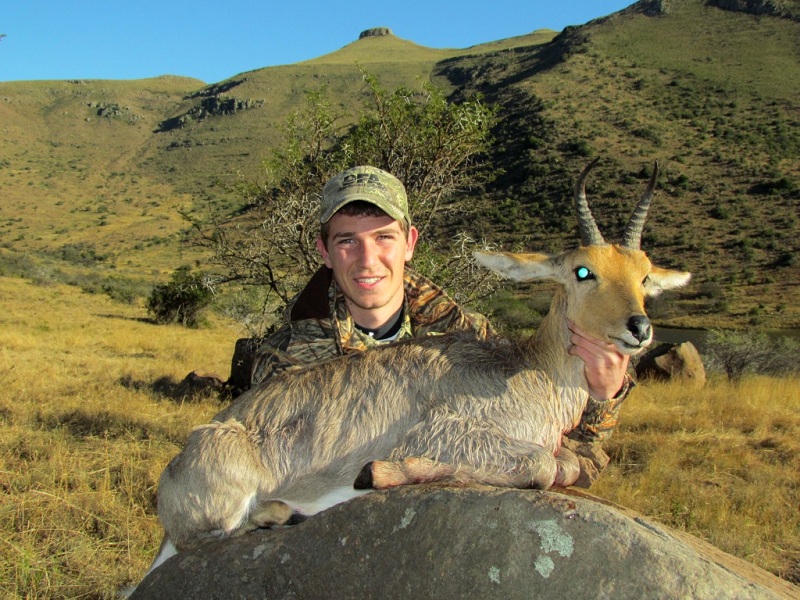 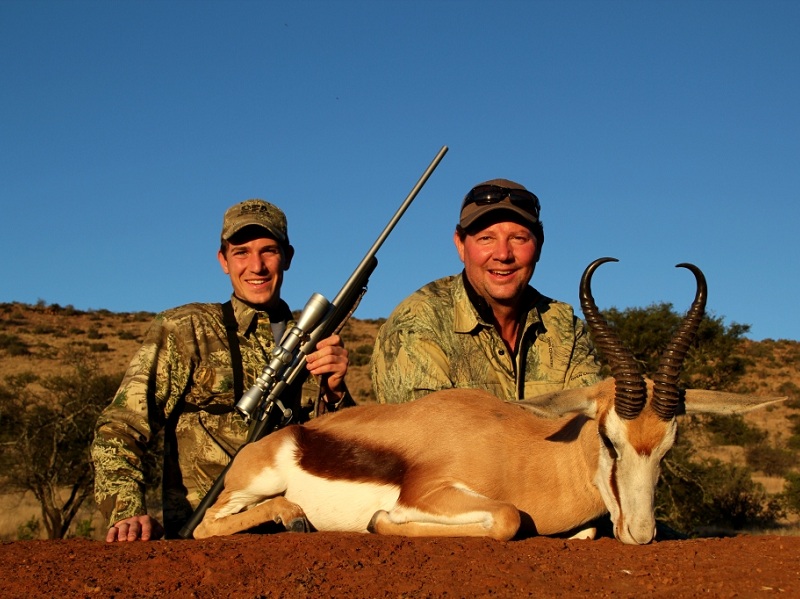 And his father, Brad, topped off our time in the north with a great last afternoon Common Springbuck.

Our journey back south was a laid back one. The hunters had hunted more than what they had expected, and the group had enjoyed their time in the north. The group had requested to attend church that Sunday, making for a relaxing day and a well-earned break for all.
Monday morning saw us refreshed and ready to hunt. 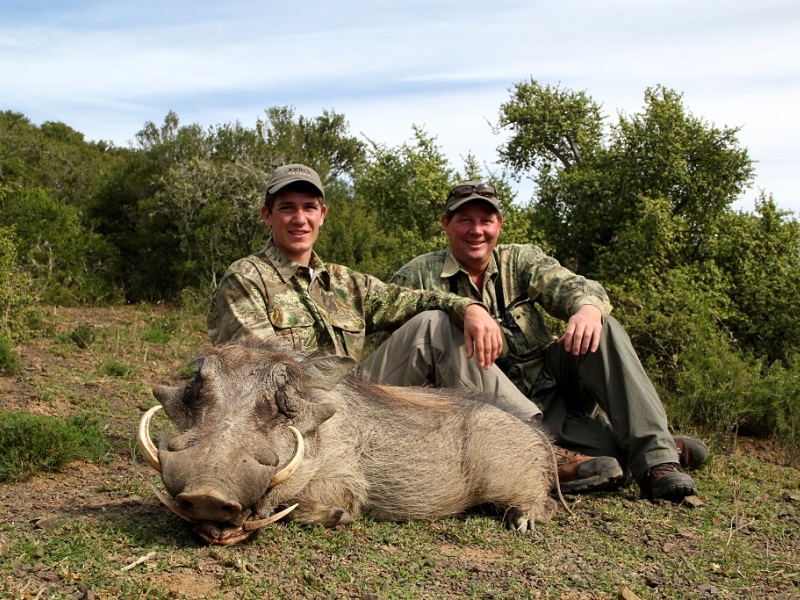 Collin had placed a Warthog on the top of his priority list. With the luck we’ve had of late on Warthog hunting, we were determined to find him a good one. We hunted all morning, keeping an eye on a storm brewing in the distance; it seemed to us that the group had hit a particularly bad run of weather for this time of year. At midday we spotted a good boar taking a siesta in the morning sun. We closed the gap to 279 yards, but weren’t confident in taking such a risky shot with a 270. We debated the pros and cons and made a bee line for the sleeping boar. I had done it previously in that particular area. If the pig wasn’t going to give us an opportunity, we’d head straight in and make our own. With about 50 yards to go, we removed our shoes and closed the remaining yards in our socks. The bow hunters would have been proud! We located the boar and Collin dropped him at 18 yards. It turned out to be one of the most exciting hunts of the year! Great going guys!

While the group had successfully hunted a number other species too, the Impala, Zebra, Warthogs, Gemsbuck, Kudu, and Springbuck, could never match the Cape Bushbuck that were to come.
When we had first met the Bateman’s on their fantastic Dairy Ranch outside of Salt Lake City, Utah, I had mentioned the beauty of a Cape Bushbuck. It seemed it stuck and both Steve and Brad had set their sights on hunting Cape Bushbuck. They were caught by the lure of this shy specie that lurks in the depths and shadows of our Coastal Forests. 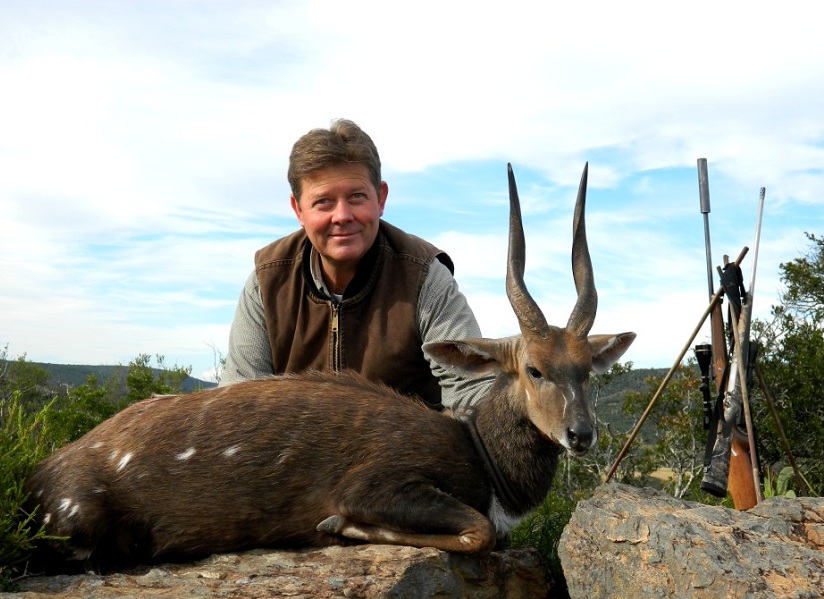 It was Steve and Gary who set us off with this super Cape Bushbuck. They had spotted the ram from a distance the previous day, but couldn’t reach him in time before he disappeared into the undergrowth. The following day the hunters returned and Steve had to pull off a difficult shot to earn his beauty. Well done Steve – He’s a once in a lifetime! 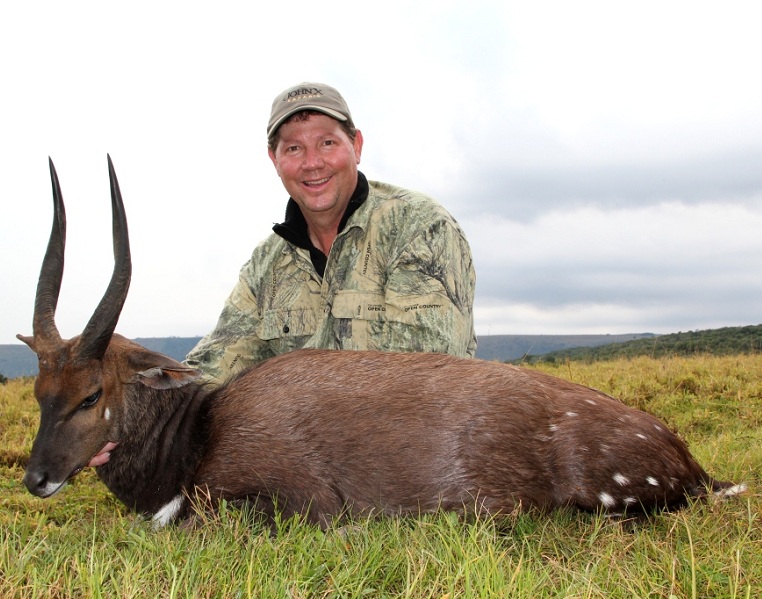 Brad, not being one to be left behind, turned on the heat and asked me to push really hard to match Steve’s unbelievable ram. It was going to be a tall order. Maybe it was the storm approaching at a rate of knots, who knows, but the game was feeding stronger than at any other period during the hunt. We’ll put it down to luck and have Brad’s smile tell the story of the one that didn’t get away.

Now you may be wondering with so much hunting and so little time, when did we have time to relax, kick back and enjoy the fun of life on safari? Well, you could say…. We made it! 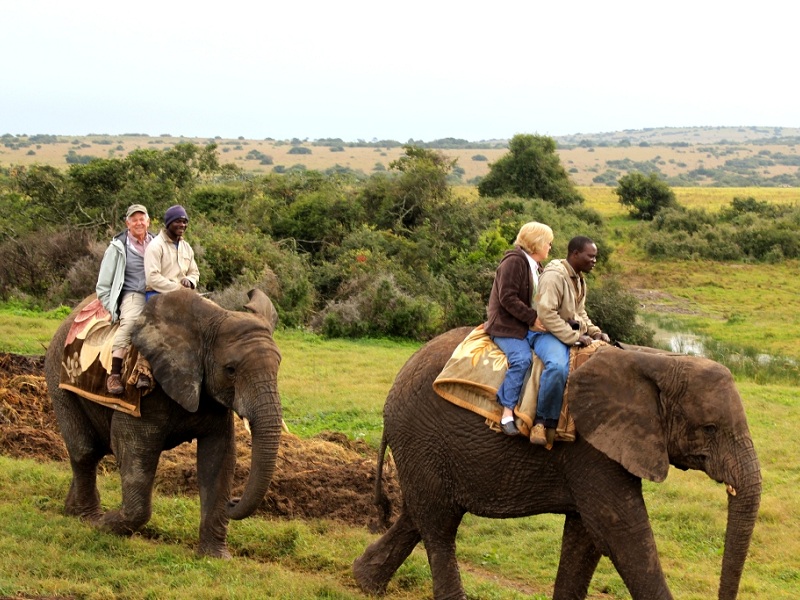 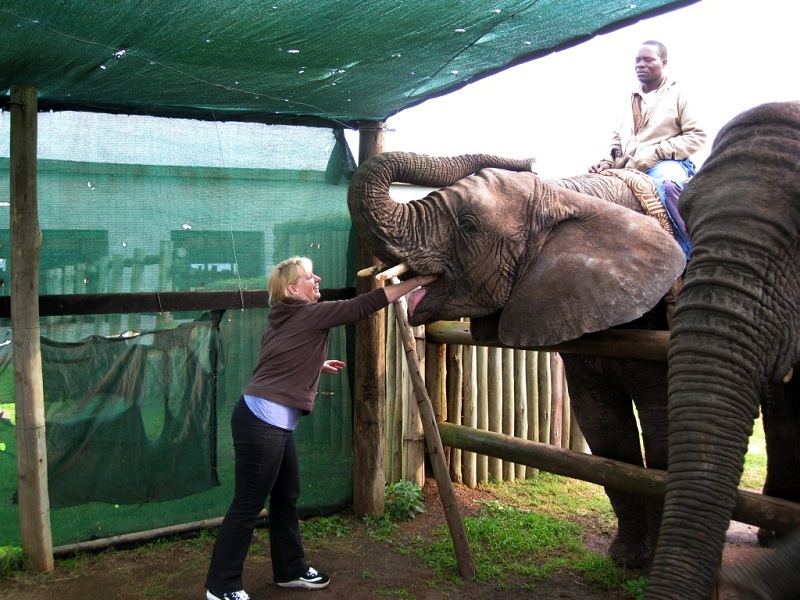 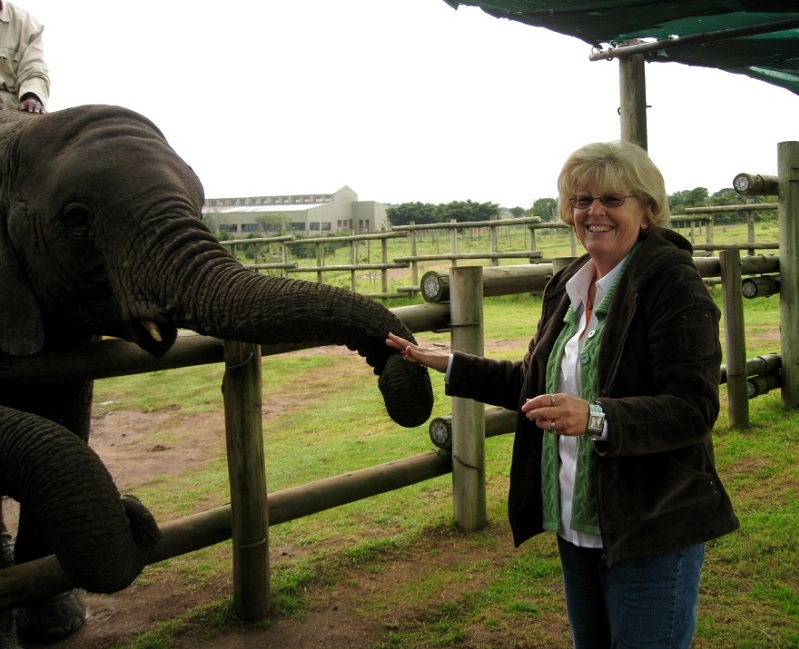 And laughed all the way! 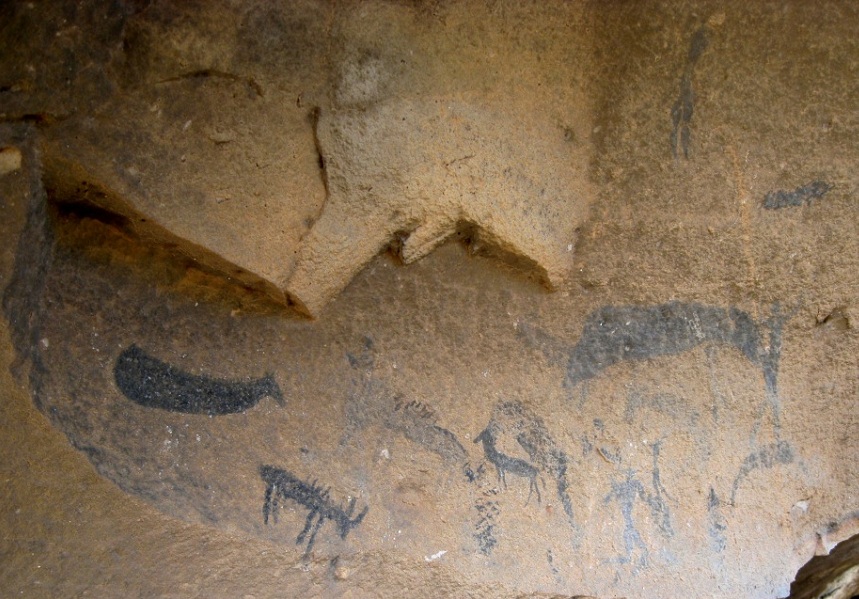 We learned about the Bushmen, their history and amazing art. 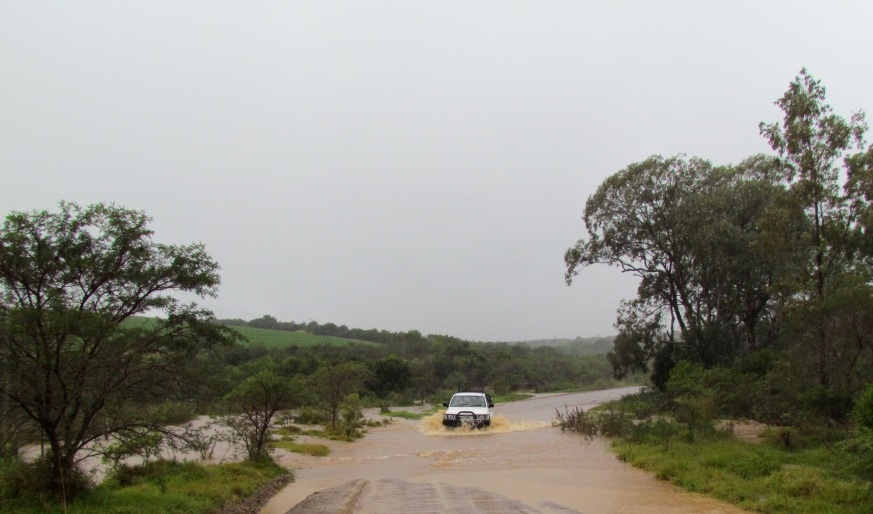 We found out that when it rains, it POURS! 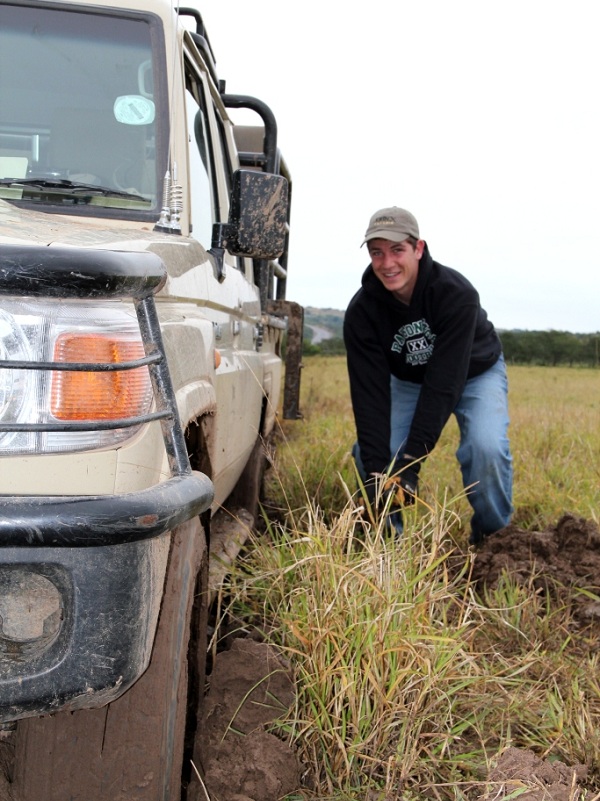 And got stuck more often than what we care to remember!

We found inspiration in the old, who took on life like teenagers. No challenge was ever too big to conquer. 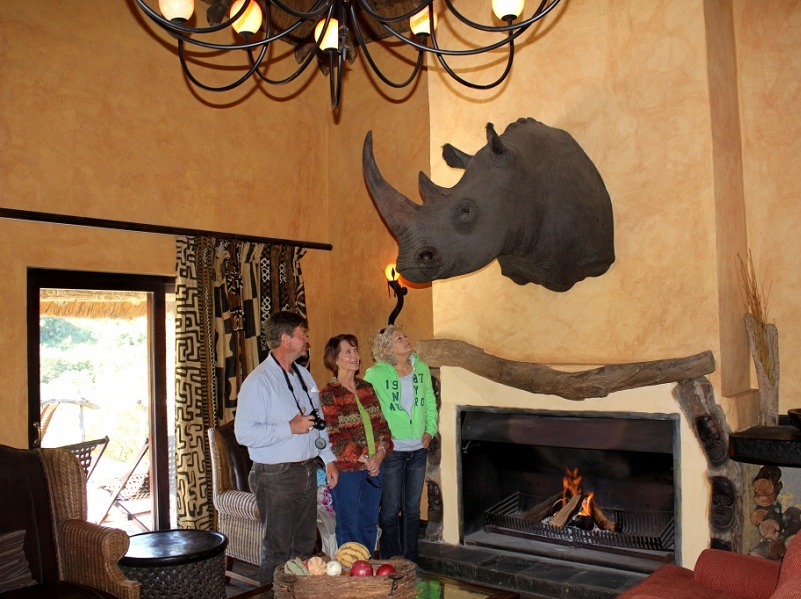 We experienced the vibrance of a new culture with our family. 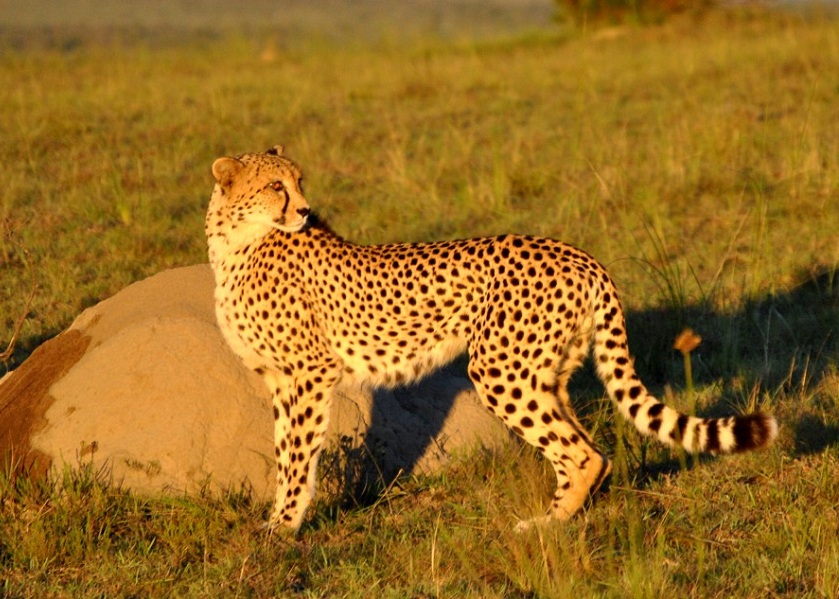 And marveled in the wonders that make Africa such a special place.

Our friends, it was a pleasure having you. We look forward to seeing you all during January 2012 on our annual visit to the USA. Until then, “hamba kahle” -go well and be safe, we’ll be planning the next one….
For more information and current updates about John X Safaris; follow us on Twitter, connect with us on Facebook and visit our website!