Over the course of the past twenty-five years John X Safaris has been involved with Safari Club International. We have not only been members, but have donated from the tiniest of the Tiny 10 to biggest of the Big 5.
Season 2011 saw John X Safaris supporting the SCI Nebraska Chapter once again. We donated 7 Days for 1 Hunter & 1 Observer + Trophy Preparation – Valued at $5000.00
Our hunt went to auction during January 2011 and was bought by the highest bidder, Mr. Heim, with all proceeds going to SCI’s Nebraska Chapter.
It was only a few days later at our annual get together, hosted by Steve and Jill Evers in Omaha, that I met Larry and Rita Heim. Both had hunted in the East Cape on a previous occasion and now were set on heading back during July 2011.
Larry and Rita teamed up with Professional Hunter, Gary Phillips, for their 7 day hunt. Larry’s prime species were Gemsbuck and Kalahari Springbuck, and anything else that he may take a liking too. For Rita this trip provided a superb opportunity to follow her passion for photography, after all base camp was situated on a Big 5 Game Reserve with numerous picture opportunities of wildlife. 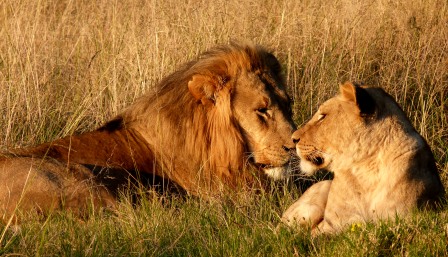 Arriving to camp on that first day saw Rita straight into the action. Her safari was truly underway with Lions everywhere.

Having taken the first day to acclimatize, relax, and have a look around, they settled into camp for the evening. The safari would be heading north the following day. 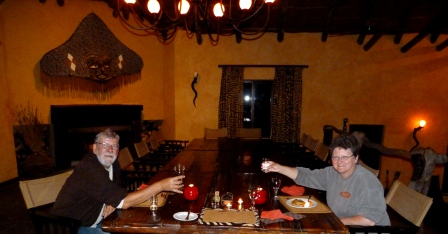 First a quiet dinner and then off to bed.

They traveled the 3.5 hours north the next morning, before heading out to hunt. 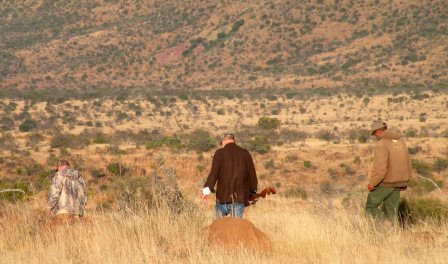 Larry had expressed the importance of hunting a big Gemsbuck while we were in Omaha during January. Gary knew exactly where to start looking. 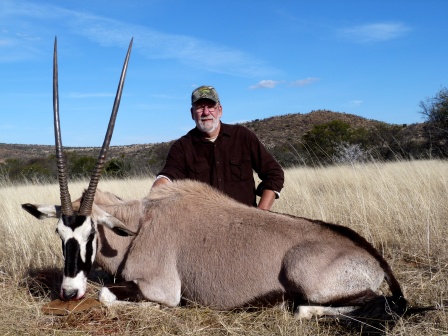 They hunted hard and looked over many trophy Gemsbuck, finally settling on this beauty.

Having enjoyed tremendous success with a super Gemsbuck, the pressure was on to match a Kalahari Springbuck of the same class. It wasn’t going to be easy. 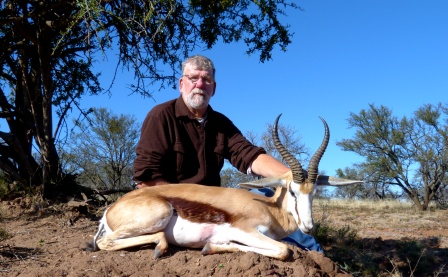 Lucky for Larry, he’d teamed up with one of the best. Gary knew his home turf better than any other; with hard work and hint of luck they hunted a fantastic Kalahari Springbuck!

Winter was in full swing during July, with most of the country side having turned from greens to golden browns and grey. 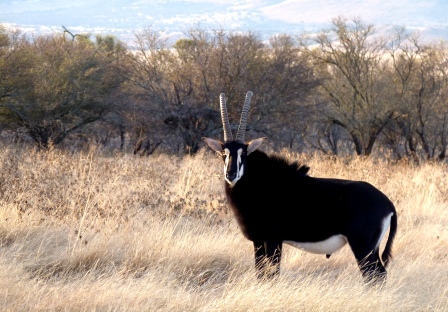 Rita however still found a gem in the midst of winter.

Having enjoyed the savannah terrain, Gary decided that time was on their side and a trip up the Winterberg would be a day well spent. As one climbs from the open savannah to 6000 feet above sea level, there’s a sudden change in terrain and habitat. The high country is characterized by open grassland with numerous springs and marshes, making for fantastic scenery and even better open country hunting. 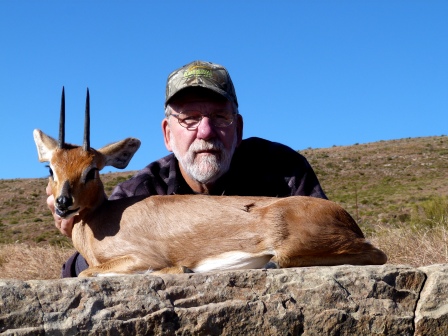 An opportunistic Steenbuck presented itself on the way up. 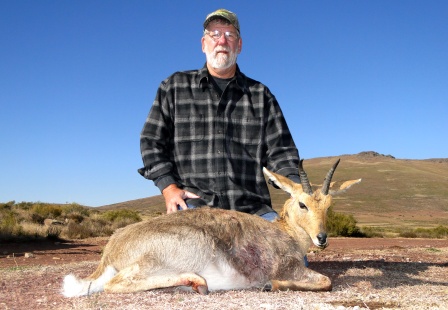 Then once on top, the hunters found themselves in the middle of Mnt Reedbuck country. A good ram topped off the morning.

Having spent three enjoyable days in the north, it was time to head back to Big 5 country. Needless to say, Rita made the most of her time capturing a variety of fantastic pictures. 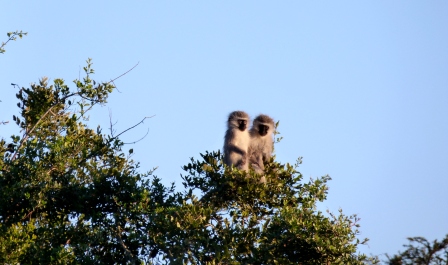 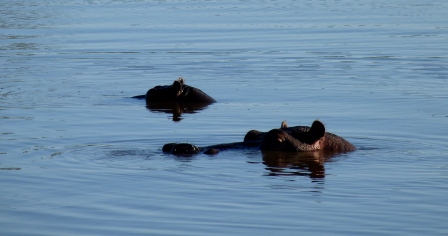 Hippos down at the water hole.

The PH’s favorite, a bus of a Warthog. 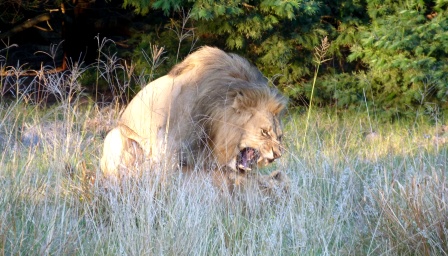 And the lions were at it again, this time with action! Great picture.

Larry however wasn’t done hunting yet. While Rita continued on game drive with a guide of her own, Gary and Larry slipped away in search of Cape Bushbuck. 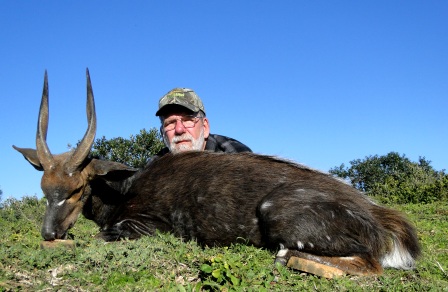 The guys spotted a number of Bushbuck, finally settling on an old ram with a thick neck and a jet black cape. A beautiful ram it turned out to be.

With only an afternoon left of their safari, the Heim’s headed out on their last game drive. 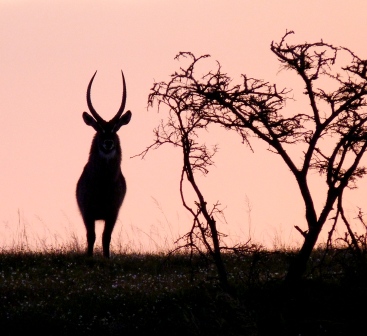 It seems the final evenings’ setting sun was all Rita required. In a spectacular setting she captured one of the best pictures of the season. The colors combined with the perfect silhouette, and a quiet sundowner, topped off a great African safari. 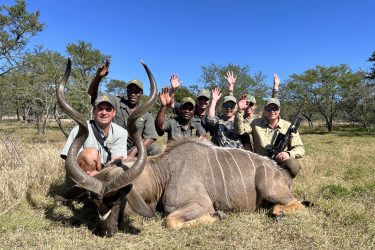