The Impossible Adventure … Until Now!

Contributed by: Heather Lantz and family
As you go through this thing called life you quickly realize that it sends you on many journey’s, but there are some journey’s we have the choice of being on.  However, the most adventurous and unusual journey’s get added to our bucket list and ultimately become the ‘Impossible Adventure’.   Those are the ones that most people never get to experience.  The Bucket List essentially becomes the place that holds the seemingly impossible journeys or dreams of life.  This was also true for us … until now.
Over the last few years, my husband and I had planned on joining his parents on a trip to celebrate their retirements. We had no idea where to go, but we all assumed it would be somewhere fairly close like the Colorado Rockies or Branson, Missouri.  Then one day out of the blue, the idea of going to South Africa on safari was suggested by our good friend, Chris Petersen, who has been on 4 different safaris with John X Safaris.
We spent many hours talking, dreaming, and revisiting a few older posts covering Chris’s safaris.

Honestly, the first reaction we all had to his suggestion was that of impossibilities.  After a few days of talking with my husband and his parents, and dreaming what it would be like on safari,  we decided that the possibility of this adventure that had been placed on our bucket list years ago…… had surprisingly become an option for us.
Next, came the months of planning the adventure we were about to embark on.  Then came the questions and more questions.  What should we pack?  What will we eat?  What immunizations do we need?  And of course, the most important question, what are we going to hunt?  I am here to say that  John X Safaris put our minds at ease and answered any questions these first timers had with a smile.  Soon September came and it was time to get the final details completed, packed and off to the airport.  I should probably explain that preparing for a trip of a lifetime while being a mother of 2 children under the age of 4 and a Boxer is quite a challenge in itself.  So the adventure truly began long before the actual trip itself. 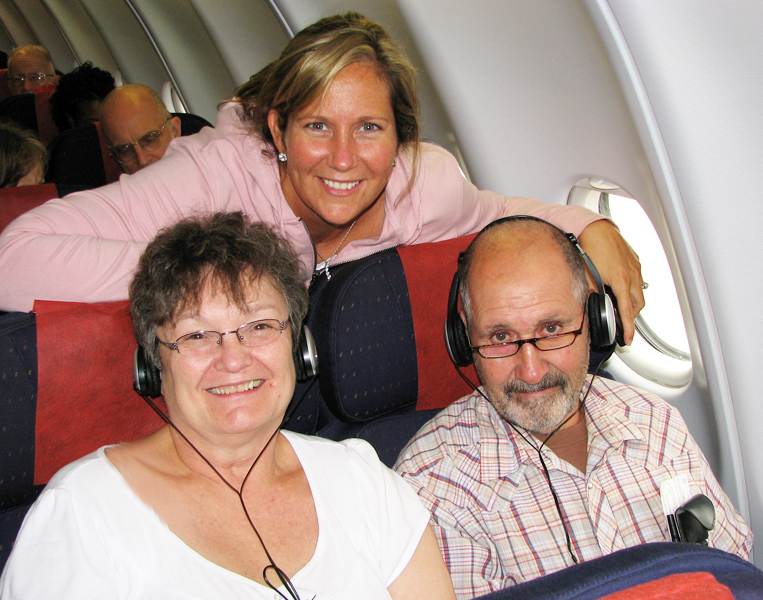 Wheels Up!!! We were excited to finally be on the plane leaving Dulles International and heading to Port Elizabeth, South Africa

Once the wheels of the plane were up, all of the planning and dreaming was part of the past and we quickly realized that our bucket list adventure had begun!  After two flights we landed in Port Elizabeth, South Africa at 9:30 PM, about an hour late.  Even though it was late we were all aware we had arrived in a brand new place and the air was filled with anticipation and excitement for the coming days.  We had about an hour drive and we arrived at Tree Tops Lodge, where we were staying for the first 3 days of our trip.  After enjoying a few drinks and a toast we retired for the night to our tents on stilts, very similar to tree houses, looking forward to the morning.
Part of the excitement of a safari is that every day is planned, with the best made plans being tentative at the best.  We had plans for game drives, sundowners, Elephant rides, hunting and any other excitement that may arise.  We packed a limited number of days with as much activity as possible.  We wanted to experience everything we could and learn what life is really like on safari.
Before we could start hunting we took a trip to the shooting range, double checking our familiarity with the rifle and ensuring all were spot on.  Fortunately, for us we were all competent and steady at 100 yards.  We were all confident in our abilities, but with the added excitement and anxiety, we all wondered what would happen when we were lining up an animal in the crosshairs.  Our Professional Hunter, Carl, didn’t seem worried at all.  He provided us with great instruction and patience.  He must have nerves of steel! 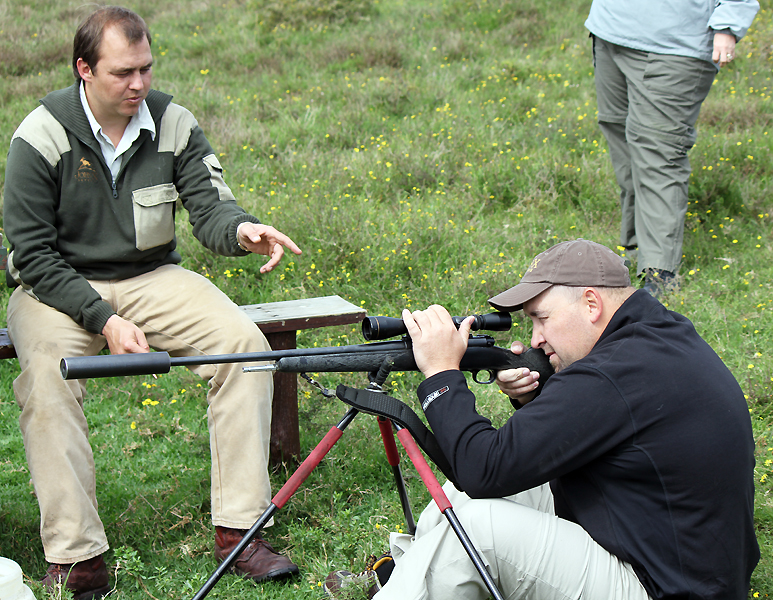 Louie lining up a shot at the firing range while listening to Carl.

After successfully checking the rifle we were off hunting.  Louie was looking for a Zebra, I was hoping for a Kudu, Jim was going after an Impala, and Elaine wanted a Blesbuck.  None of these were guarantees, but we were going to give it our best shot. 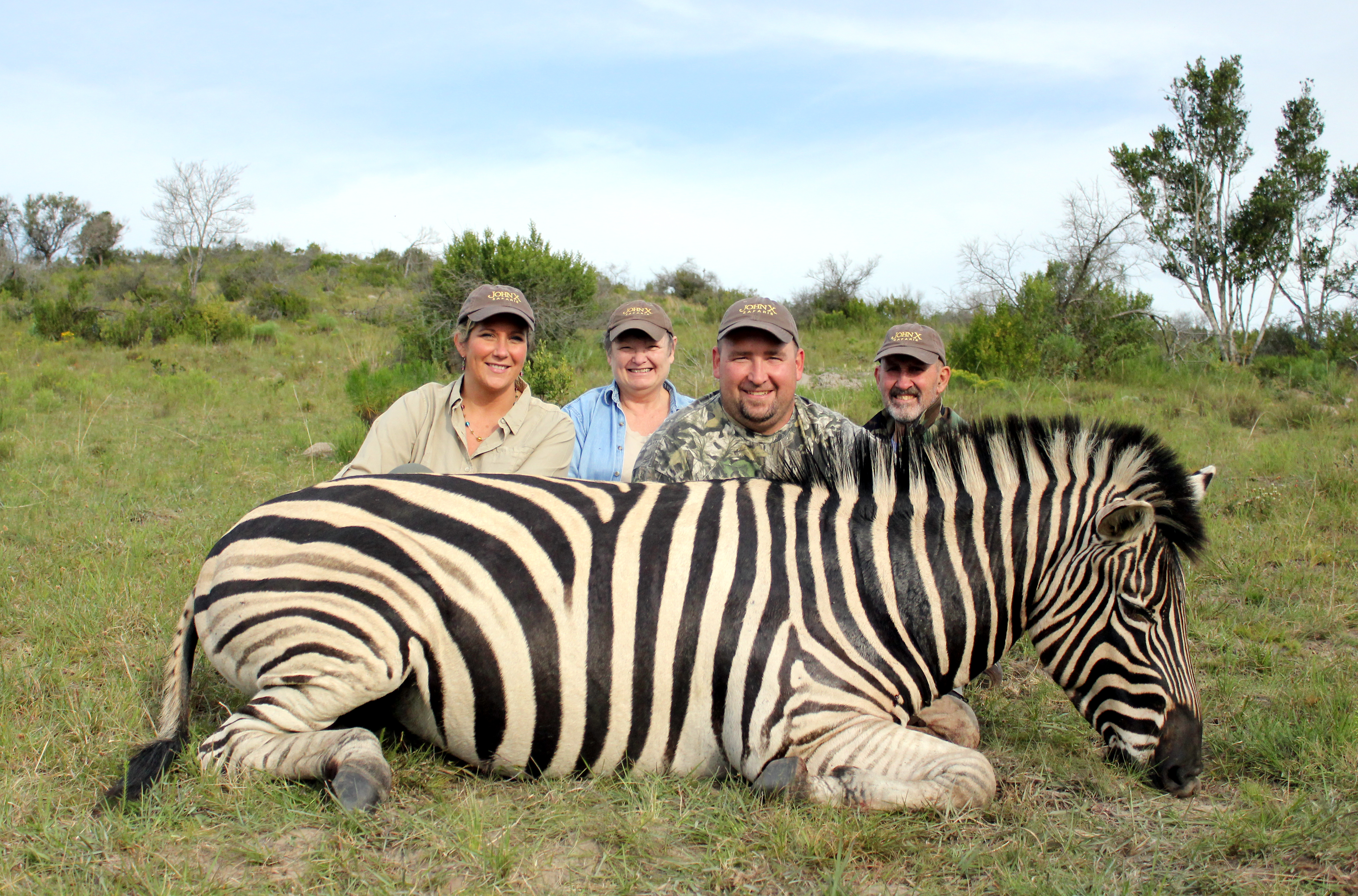 After an exciting stalk, Louie was the first of us to experience success by taking this beautiful zebra!

The next day we woke at 5am to begin my Kudu hunt.  After a good breakfast and packing a cooler for lunch we headed out to start the adventure.  We were fortunate to see several Kudu within the first few minutes that morning, but Carl was not impressed with them. So we watched and stalked them for several minutes in hopes that an appropriate bull would reveal itself. This did not happen and it was then the start of a long hard hunt that was full of excitement.
Carl realized that if we were going to find a Kudu we were going to have to hunt it.  That is exactly what we did!  We spent the next several hours hiking up, down and around the hill sides.  Through thistle bush pastures and crawling underneath the brush, the longer we stalked the more excited I became.  I love the experience of the hunt, there is nothing like really working for your success!
Though the Kudu hunt wasn’t going well in the aspect of finding an appropriate Kudu, we came across some nice Warthogs.  So we decided to take advantage of this opportunity and Carl helped me get into a comfortable shooting position.  Well as comfortable as I could be, between all the anxiety and nerves, I could barely hang on to the gun.  As Carl was whispering instructions to me (I really have no idea what he was saying), I was repeating to myself “come on Heather get it together, settle down and quit acting like a girl”. Fortunately, I had to wait until the one I was to shoot came out from behind some bushes.  When it finally appeared, I lined it up in the crosshairs, using the instructions Carl had provided at the shooting range and slowly squeezed the trigger.  One shot … one drop … I had done it, my first kill with a gun! 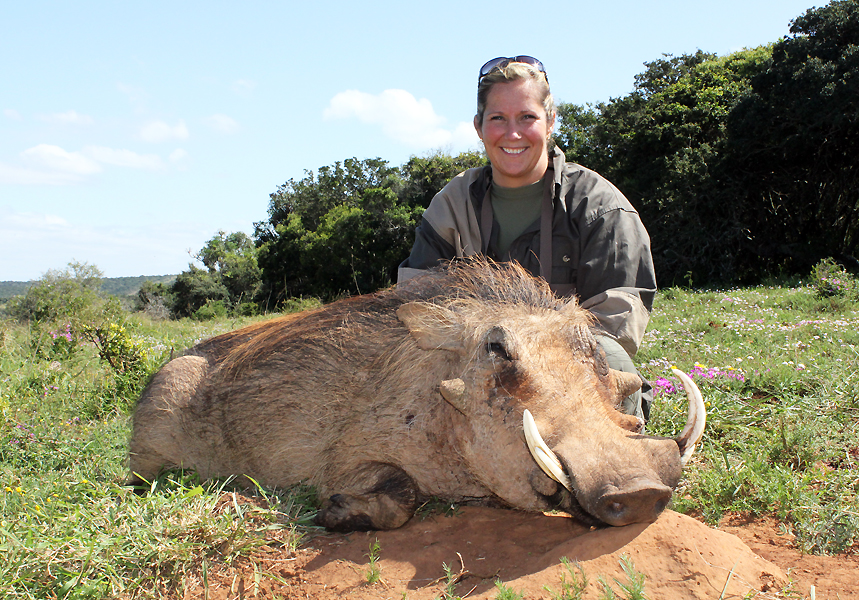 After poising for some pictures we resumed the Kudu hunt.  Again we were not successful, but it didn’t matter we enjoyed a great day hunting. We returned to camp that night with some great camp fire stories and some memories that will last me a lifetime!
Jim and Elaine were up next on the hunting front and both came through with flying colors.  We searched for quite a while for the perfect Impala for Jim to hunt.  Carl would spot a particular ram, which was part of a herd, he’d carefully explain to Jim which animal it was, and then just as everybody knew which animal it was, they were moving again changing position.  I quietly thought how will Carl ever be able to explain which one to take.  They all look the same.  I could hear Carl giving instructions which made no sense to me.  Then the shot rang out and an Impala dropped … one shot … one great shot!  Jim had not only shot the correct Impala (which seemed like an impossibility to me) but he only needed one shot. 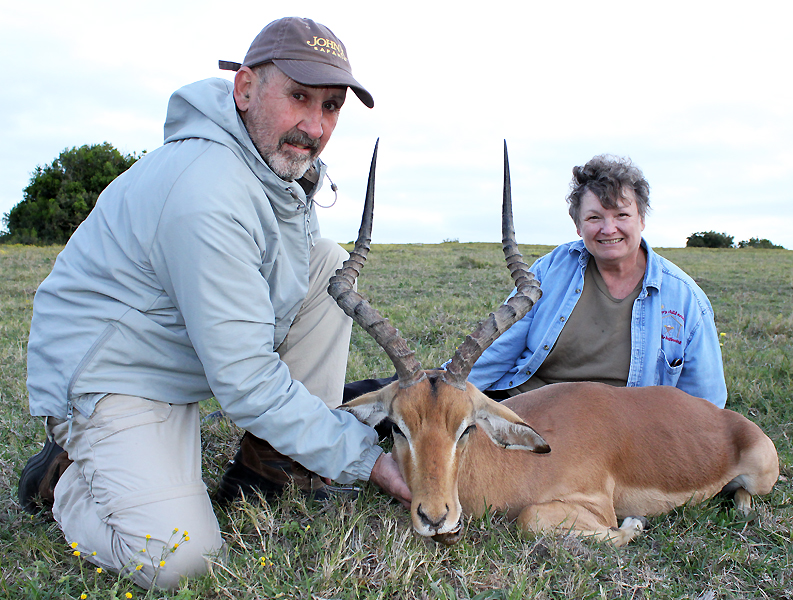 We had a little day light left and with some luck we had time to find Elaine’s Blesbuck.  It seemed like it as a few minutes later we spotted a Blesbuck for Elaine.  With Elaine having had a knee replaced, she was not as mobile as she used to be, which was going to make things a lot tougher. This made no difference to John X Safaris and their Professional Hunters, their goal is to accommodate any hunter and their abilities.  Elaine took full advantage of this opportunity and bagged her Blesbuck. 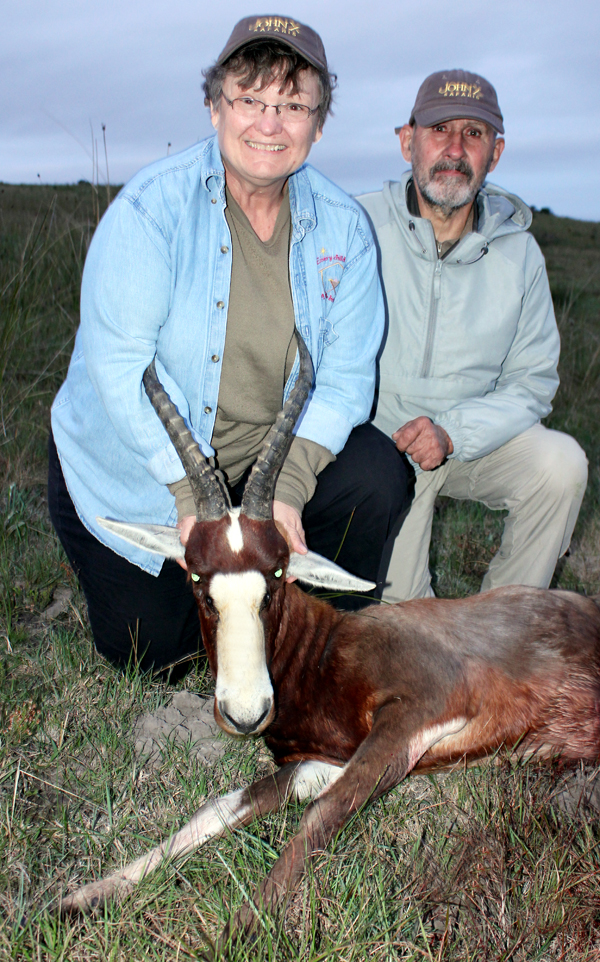 An excited grandma Elaine took her opportunity late one afternoon, bagging a Blesbuck. 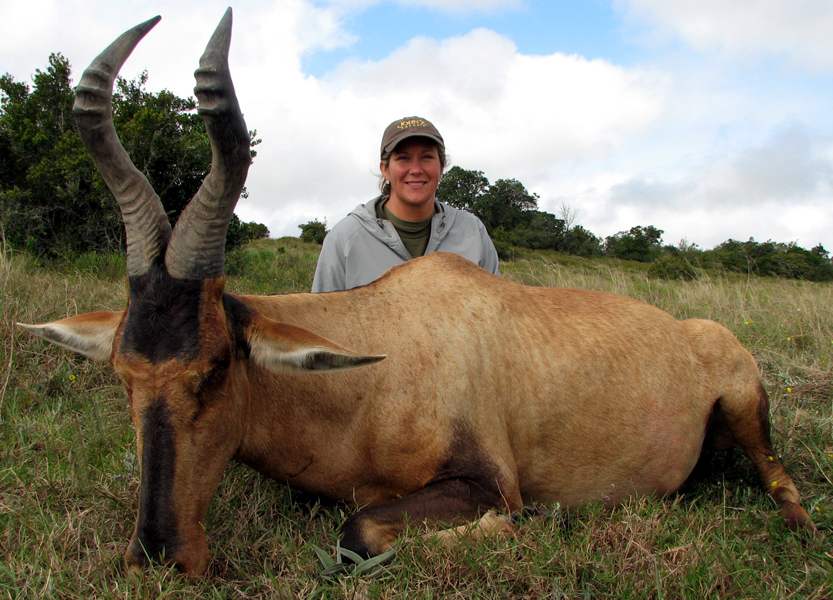 I ended our hunting experience with this beast of a Hartebeest.

After we completed the hunting part of our safari, we changed our focus to game drives.  We now wanted to see as many animals as we could.  We all wanted to sit with them in their environment and observe them interacting with each other.  We were not disappointed.  There was something new and interesting on every game drive we were on.  The following are just a few pictures to showcase the beauty of the animals. 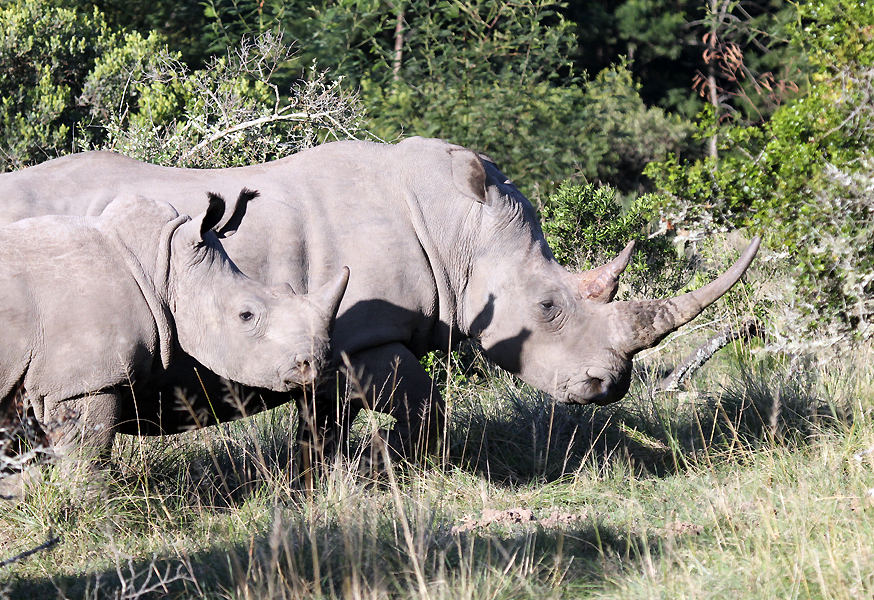 On our first game drive we were able to get close to a Mama and baby Rhino for some great pictures. 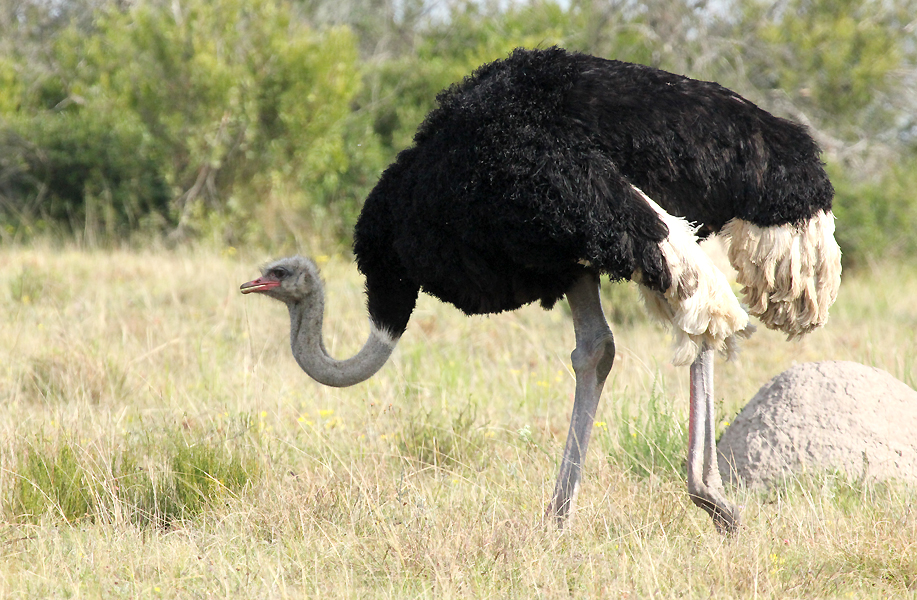 To our surprise there were even Ostrich on the Game Reserve. One of our favorites! 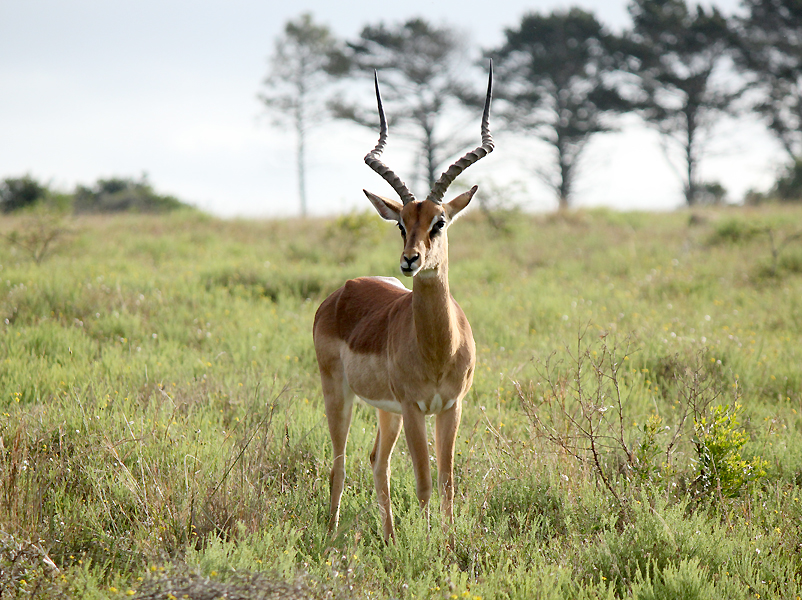 We had to stop and take pictures of this perfect Impala. What a beauty! 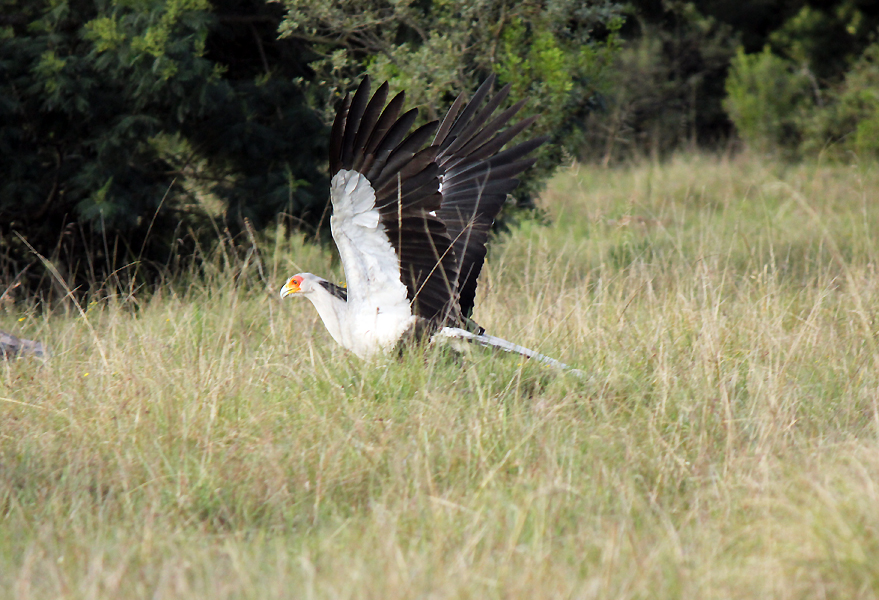 The Secretary bird, a unique but beautiful bird of South Africa. 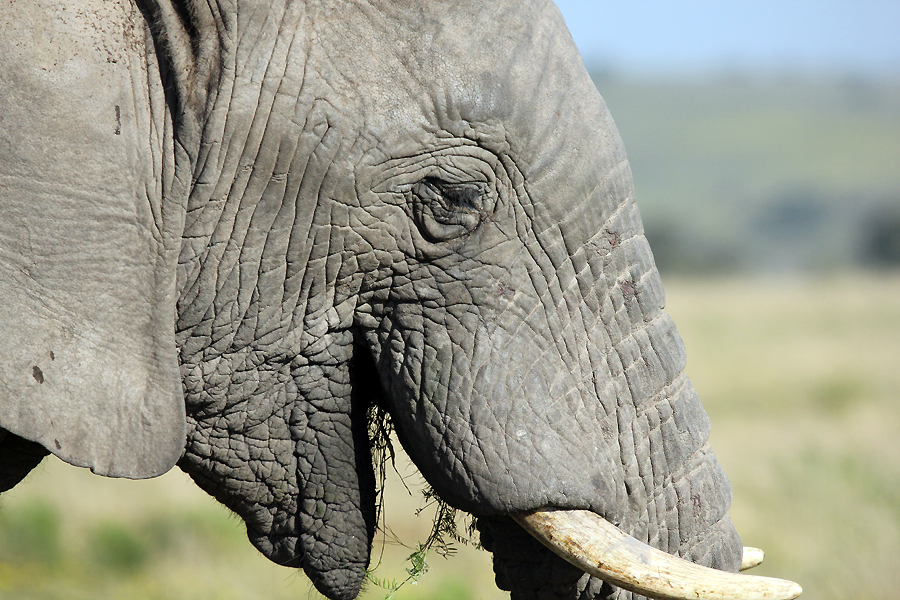 This gentleman let us observe him for a long time on one of our many game drives. 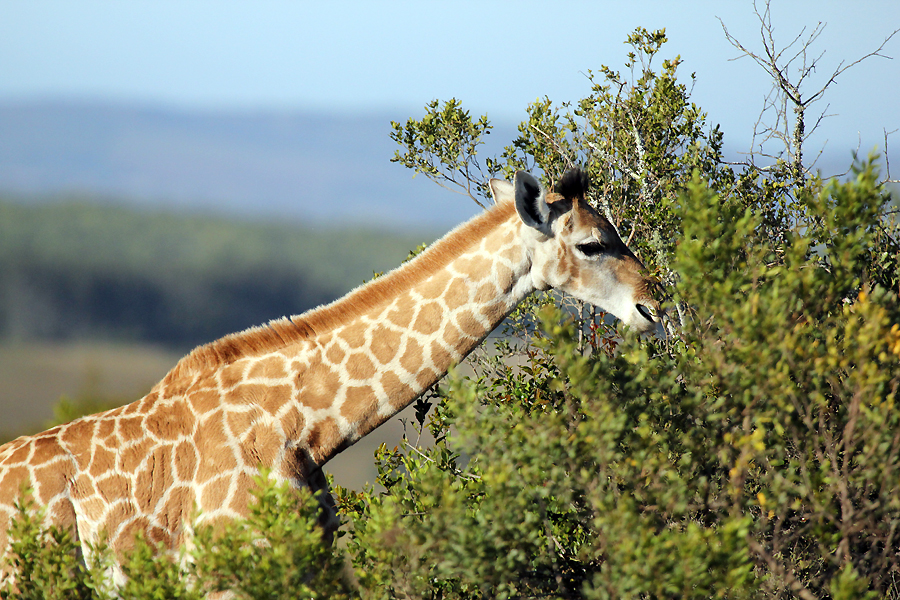 As tall as they are the Giraffe’s are hard to find at time’s but it is definitely worth the search. 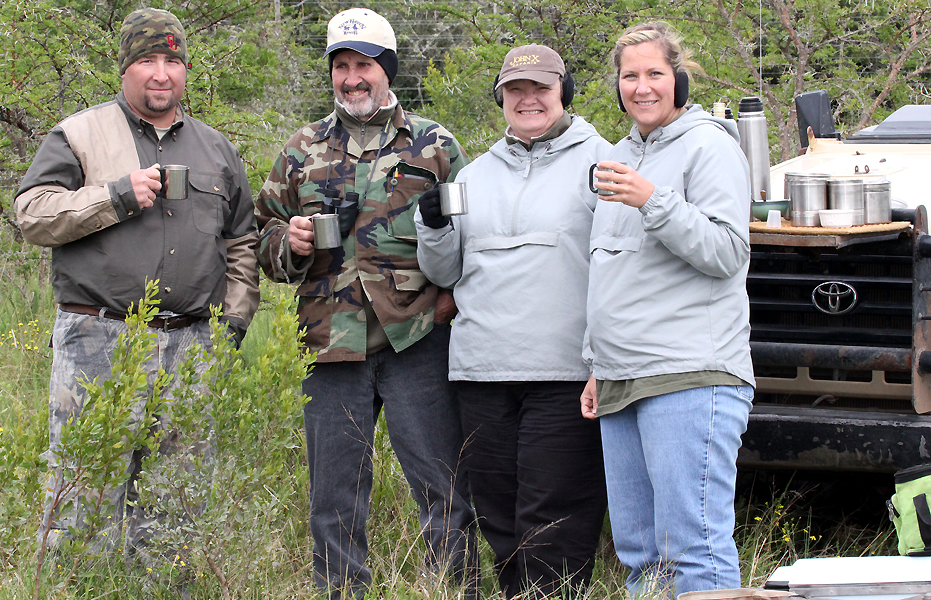 The morning game drives could be a bit chilly, but our ranger always had our favorite hot drink for us and knew of the best places to stop.

Observing the animals on game drive wasn’t enough for us.  We decided to visit a nearby Elephant Sanctuary for up, close, and personal experience.  We were able to pet, interact and ride the Elephants!  After we finished our ride we were able to feed.  It was fun and a great way to top off a wonderful family safari.  I think my husband, Louie, secretly liked feeding them the most or he was just relieved he didn’t fall off! 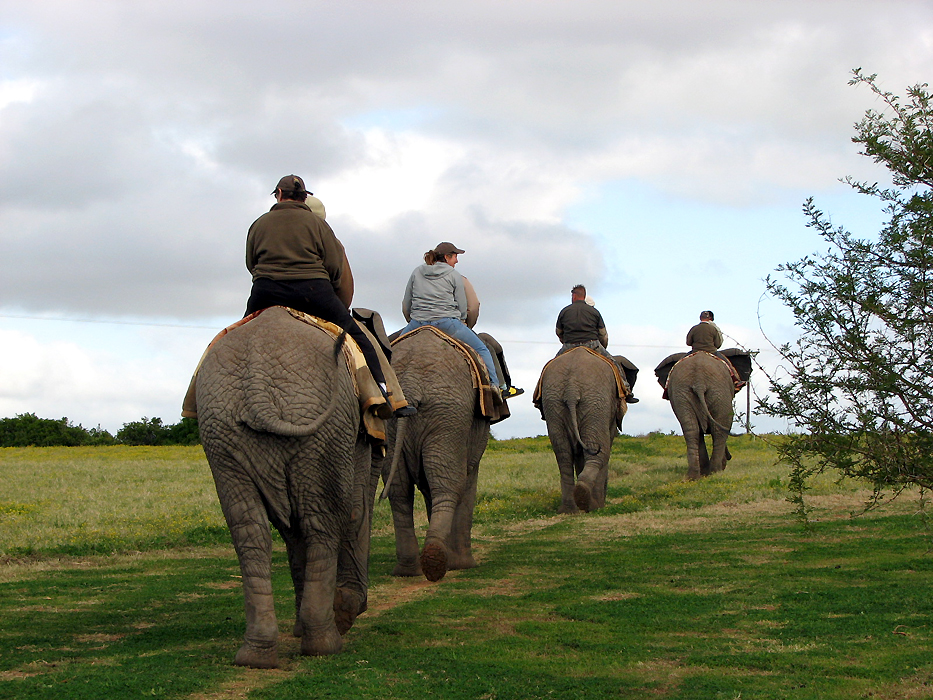 A family that rides together stays together! We couldn’t go all the way to South Africa without experiencing Elephant rides! 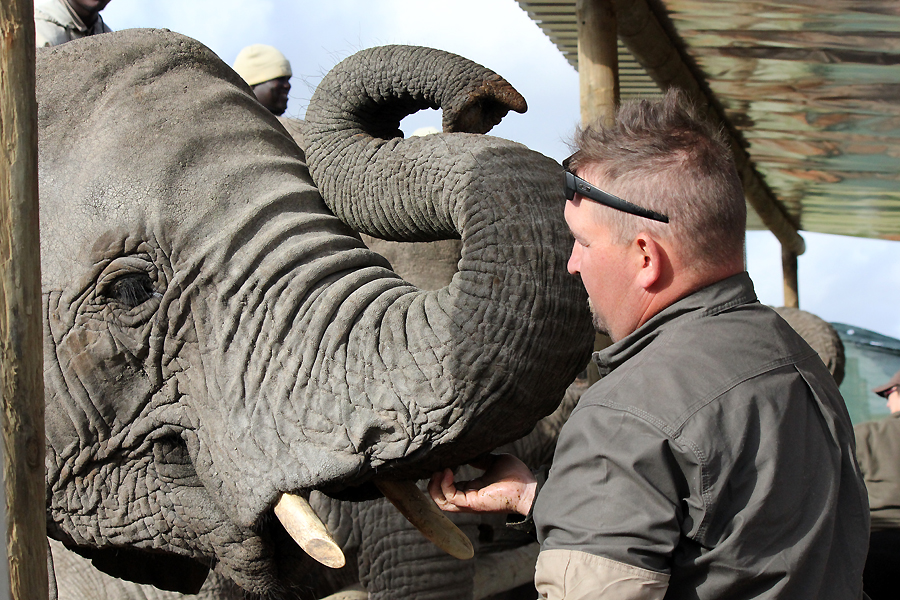 Of course we had to return the favor and give our new friends their favorite treats. 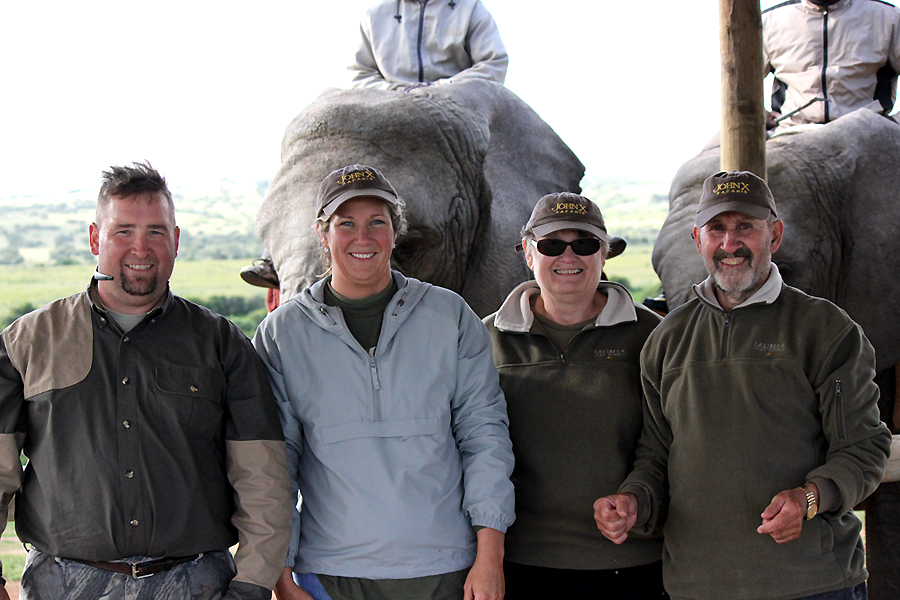 Couldn’t leave the Elephants without a great family picture.

Every night ended by gathering around the camp fire, relaxing with our favorite drinks and sharing the memories of the day.  The camp fire conversation of the last 2 days of our safari were that of ‘The Great Cheetah Escape’, which is another blog to come.  In the meantime, you will have to Like us on Facebook, to view a few of those photos.
On the last night we were able to leave some of our camping culture behind in South Africa.  After all with everything we had learned and the hospitality shown to us, it seemed like the right thing to do.  That last night Grandpa Jim made desert for camp using his dutch oven cooking skills.  It was a great way to end our safari, sharing a bit of our American culture. 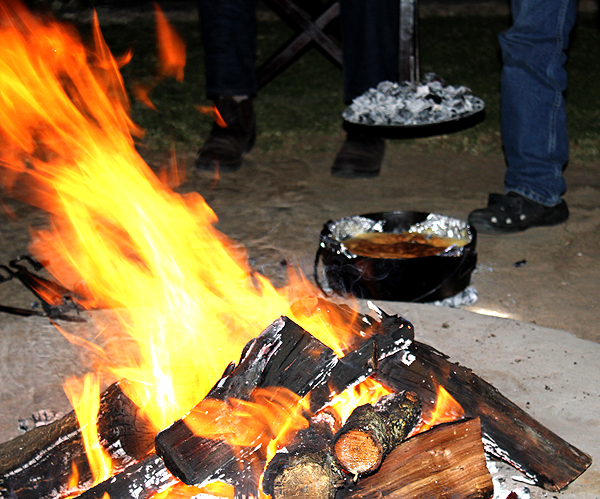 Dutch Oven Desert – compliments to Grandpa Jim! And the entire John X Safaris staff for the trip of a lifetime!