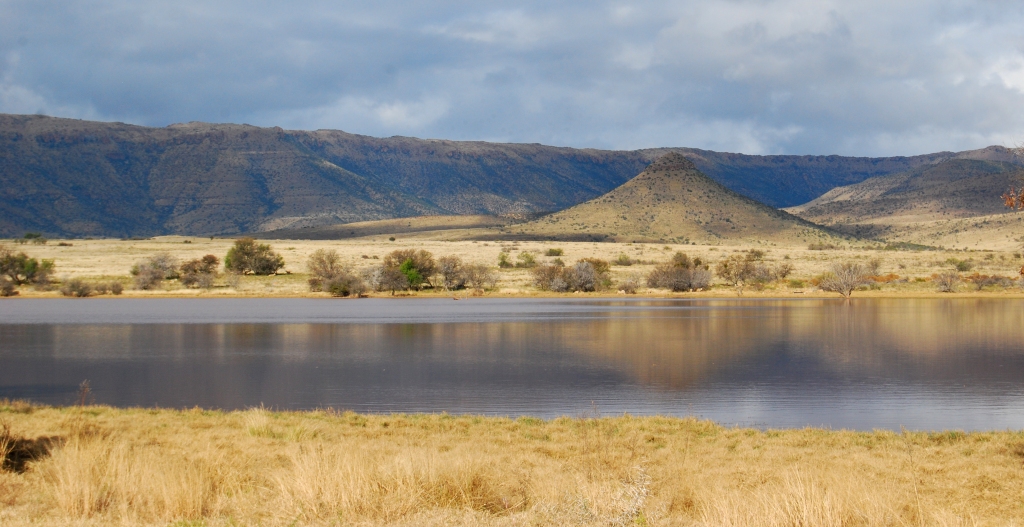 We met Eric and Kristie Arnette during 2001 when they joined John X Safaris on their first big game African safari. Subsequently they returned during 2003, and then travelled to Tanzania for Cape Buffalo during 2009.
It was not until the 2010 Dallas Safari Club convention that we bumped into Eric and Kristie once again. The Arnette’s conveyed how much they’d enjoyed their previous hunts with John X Safaris, that 2012 would be the year that they’d like to return to the East Cape, SA. Their kids, Hunter and Kasey, together with Eric’s father, Shelley, and step mother, Candace, would be joining them on their fun-filled action packed adventure.
The planning of the trip took place over two years, every detail ironed out to perfection. The safari would start with John X Safaris in the East Cape, hunting from both our Coastal and Northern areas. At the end of their hunt the group would be collected by Freewalker Luxury Tours, for a tour down the Garden Route and finally onto Cape Town.
With much anticipation and months of preparation the third of June 2012 finally rolled on. We were more than ready for their arrival.
Eric, Kristie, Hunter and Kasey, would be joining Professional Hunter, Carl van Zyl and his team, while Shelley and Candace joined one of John X’s longest standing Professional Hunter’s, Greg Hayes. For Eric it would be a return for some of the rarer and quite often harder critters, while the rest of the family all had their personal favorites.
For Hunter it was a Cape Hartebeest, Kristie had set her heart on Nyala, and Shelley a Kudu or Gemsbuck. Candace and Kasey would join the adventure, opting to be observers, enjoying the rewards of the hunters success and Africa’s breath-taking wildlife.
Eric had been after a Cape Eland on numerous trips, often finding bulls possessing the qualities the trophy hunter seeks, but something better always seemed to come up at the optimum moment. Having learnt that a Cape Eland was Eric’s priority, Carl and his team got scouting a few months prior to the Arnettes’ arrival.
Having spent most of that first morning relocating a specific bull that was spotted a month prior, the real hunt began with a 4 hour stalk. The herd had disappeared into a canyon, only to reappear hours later. When the time came Eric made it count at 350 yards. 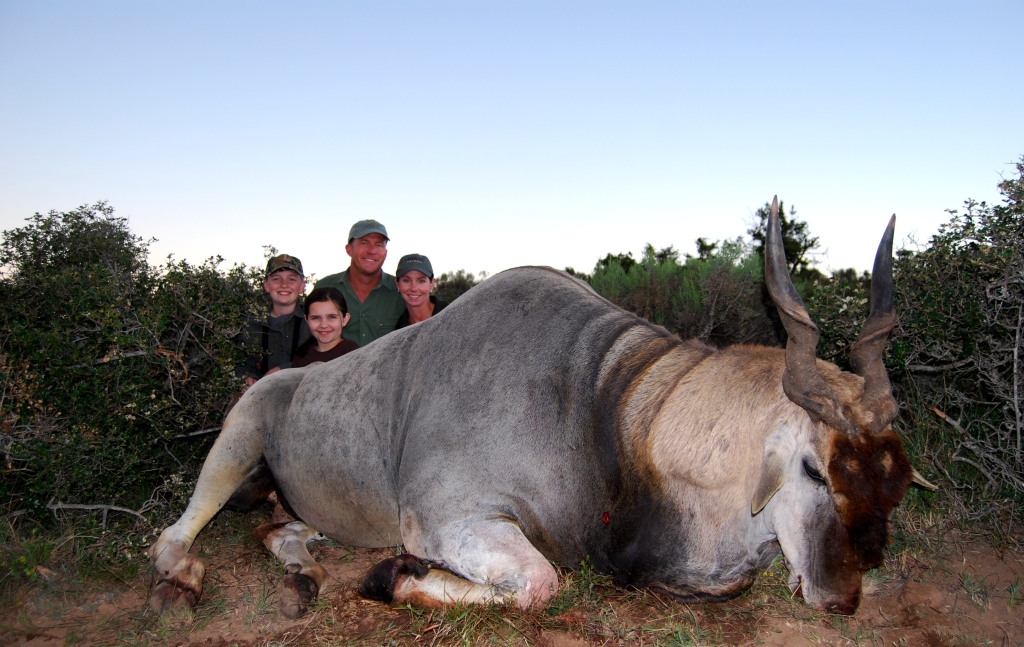 The big ones don’t come around every day. This particular Cape Eland turned out to be one of Carl’s highlights in his guiding career thus far. The bull weighed in at +- a ton (2000 pounds), carried a set of horns like a younger bull, but boasted the gun barrel blue and tuft of a 13+ year old. (And yes, if you were wondering? That is a family of 4 sitting directly behind the bull!) 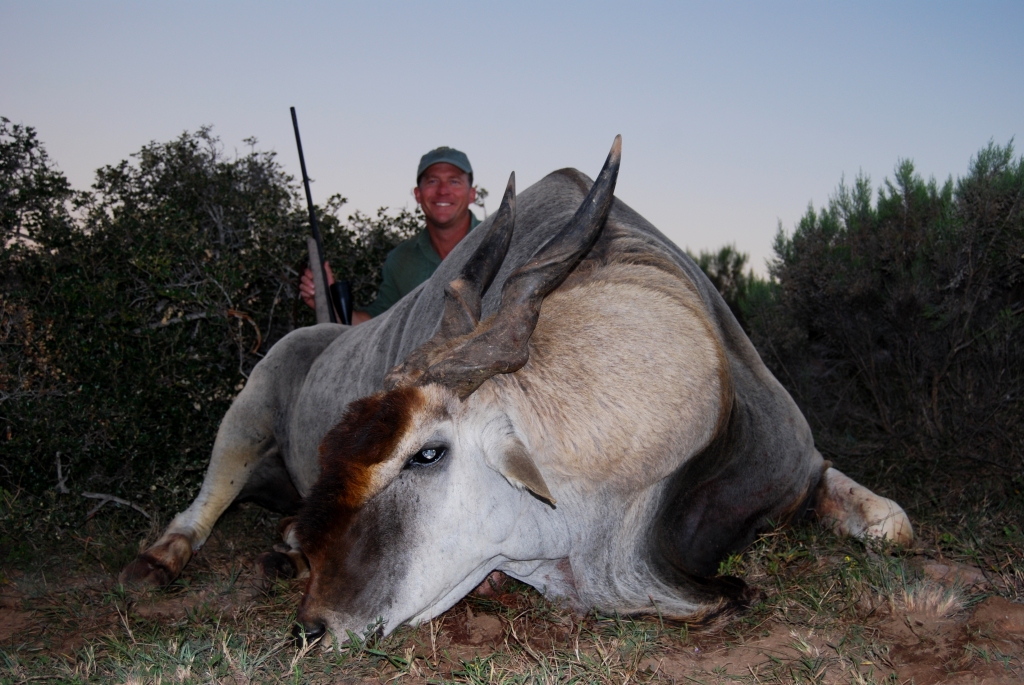 He is without a doubt the epitome of a truly great Eland bull.

That first day saw Candace opting for a day of Big 5 game drives while Shelley, together with Greg and his team headed out in search of Kudu. 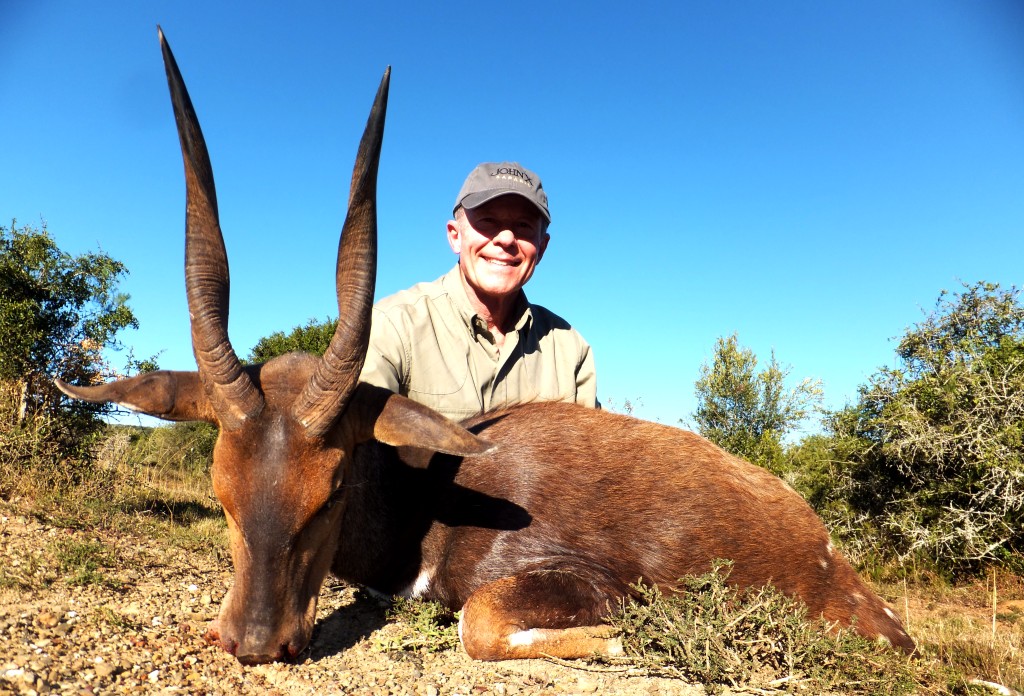 Shelley soon learnt to expect the unexpected in Africa. A beautiful Cape Bushbuck crossed their path setting off an exciting hunt.

Hunter in the meantime was displaying the patience of an adult. By day two we were all desperate to find him a Warthog, but none of the boars we spotted made the required cut. It was not until late afternoon that we finally got a break. 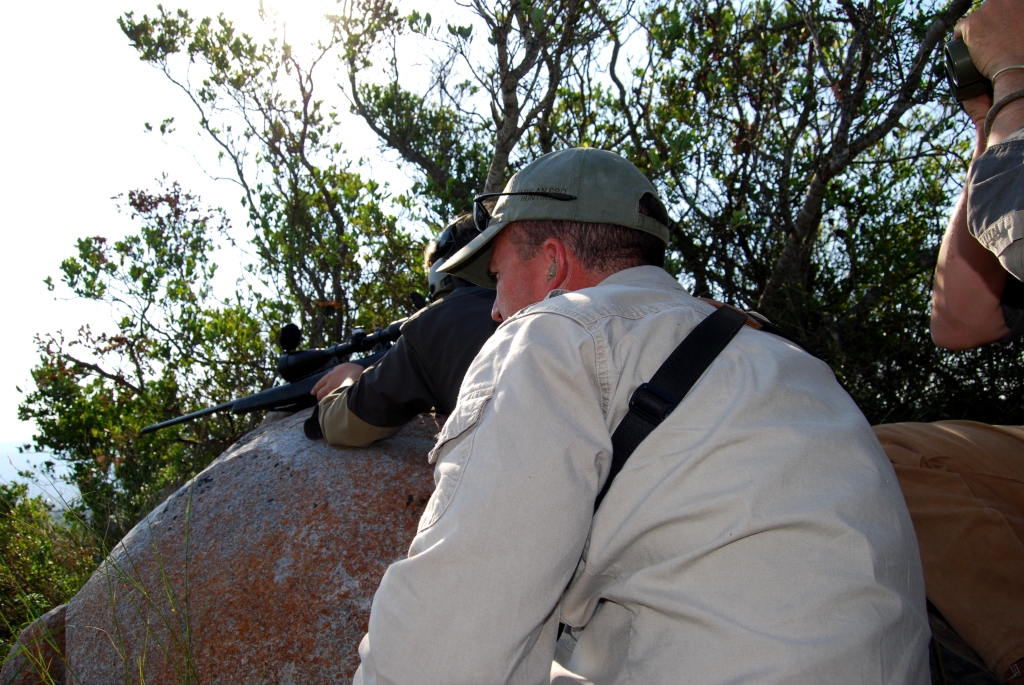 We’d spotted a group of Black Wildebeest in a sheltered canyon. The bull was bedded down in the centre of the herd. The wait was on. 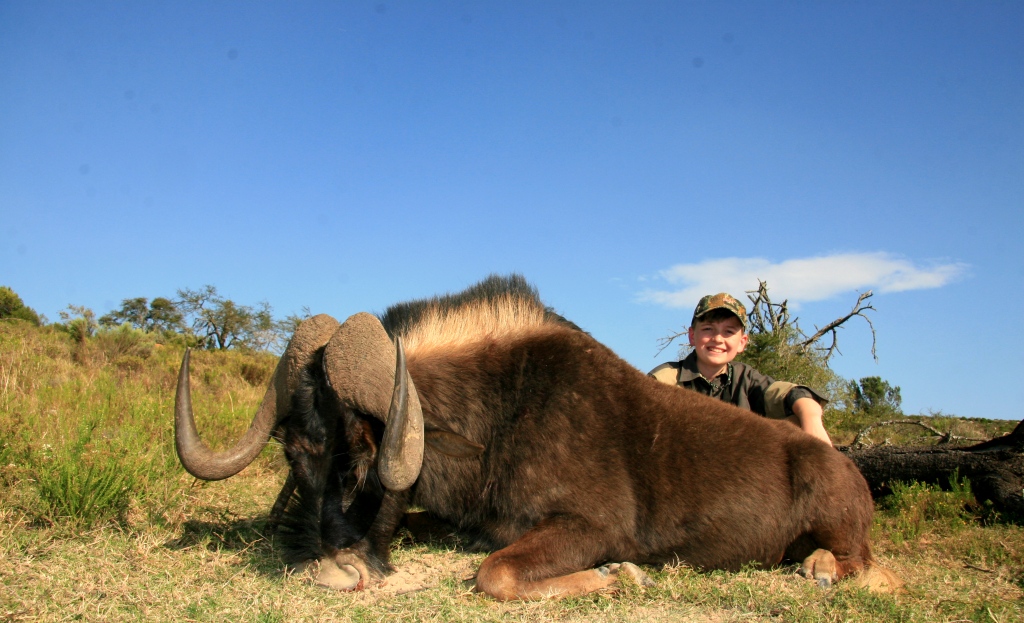 When the bull finally stepped out, Hunter settled into his dead rest over a large boulder. He calmly squeezed off his round. The bull jumped at the crack of the shot and raced away from the herd. Within seconds he started losing momentum and dropped to the ground, earning Hunter his first African trophy. 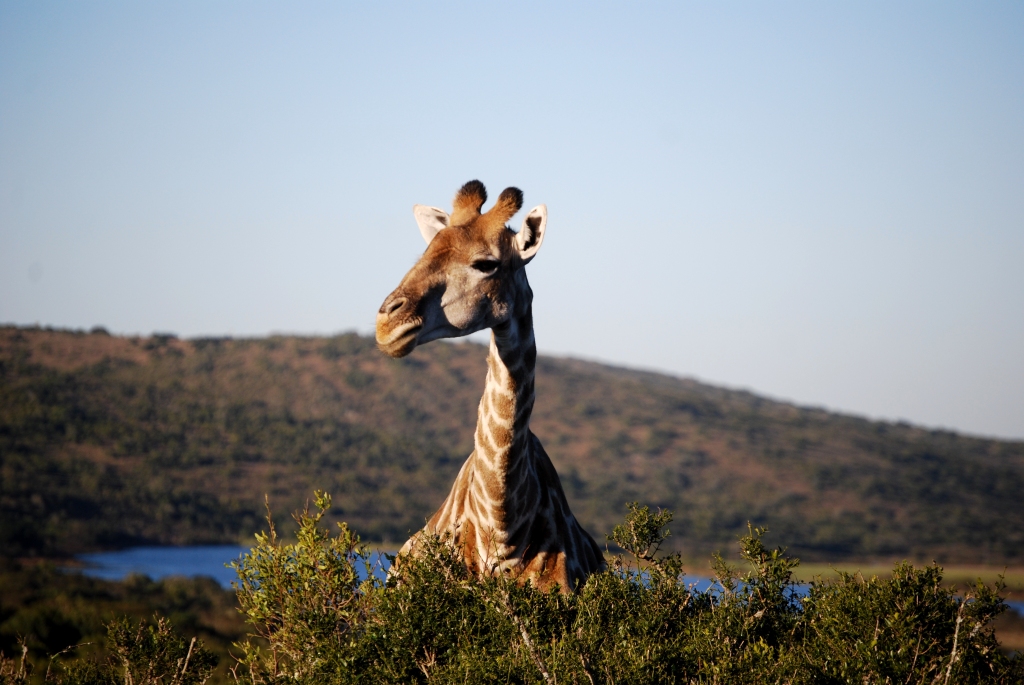 Candace on the other hand was having just as much fun, shooting away with her camera.

After Hunters’ successful Black Wildebeest hunt, Eric and Carl dropped the family back at camp for a relaxing evening around the campfire while they headed out in search of the elusive Bushpig. 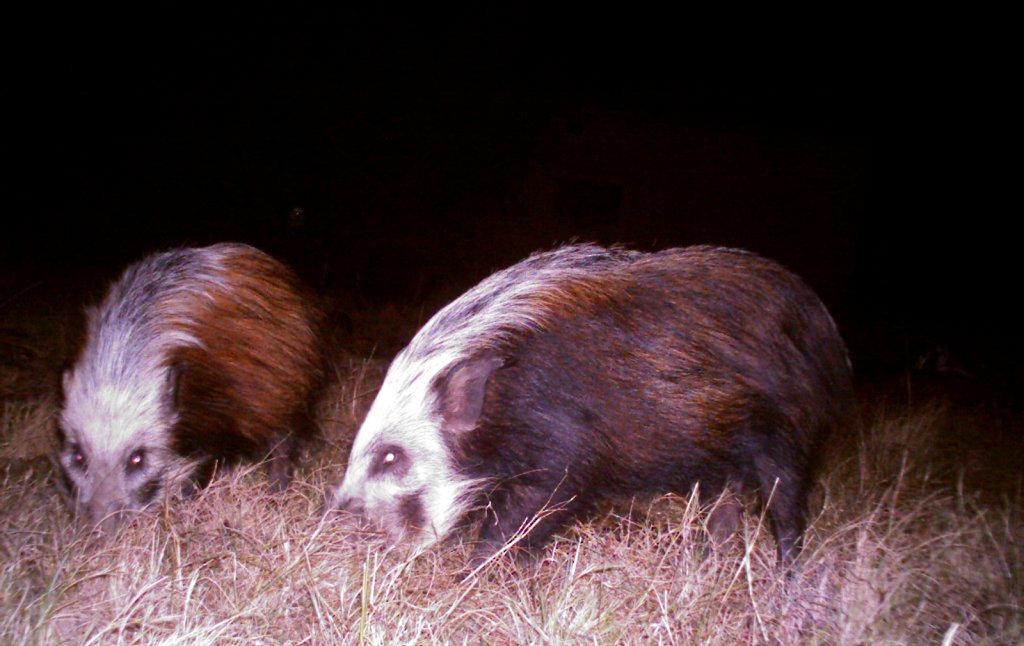 The pigs had been on bait for over two weeks by the time the Arnettes arrived. With a feeling of confidence we settled into our hide. The hard work had been done. There was nothing more to do than wait….

And what a night it turned out to be! 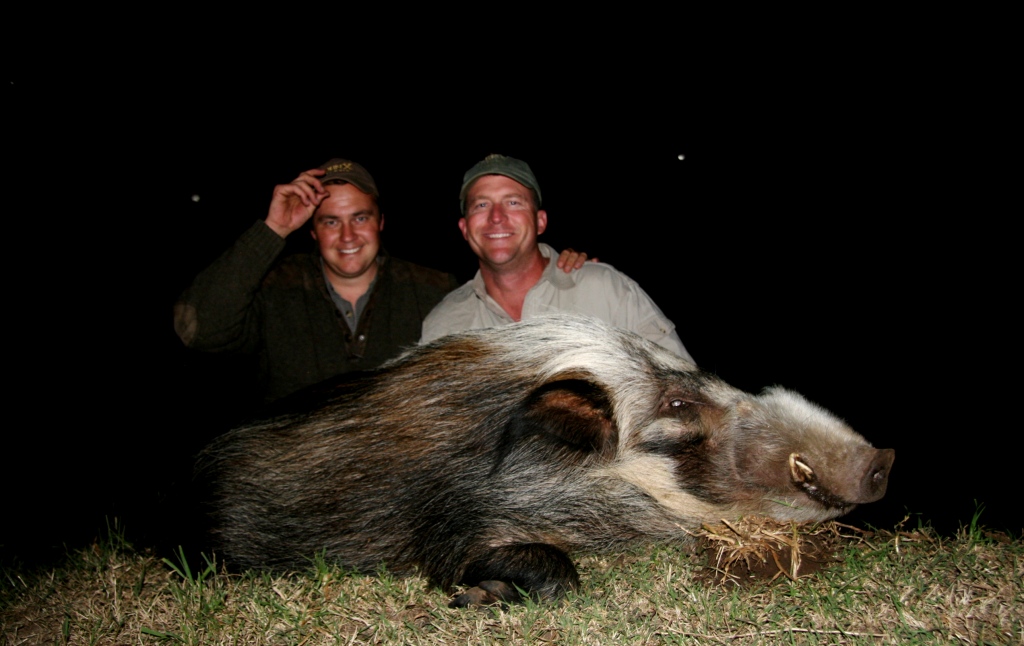 A Bushpig is never a given, not even if the hunter has traveled to Africa on numerous occasions. Eric deserved his boar, he knew what the hunt was about, and expressed his appreciation for the hard yards his team had put in prior to his arrival. Traveling back to camp that evening felt good – success on one of Africa’s most difficult plains game species made all the difference.

Eric’s boar topped off our time on the coast, the following morning saw the group heading north. The long dusty road leading to the Great Karoo lay ahead of us… and who knew what adventures our journey would bring.
Join us again next week as we continue on the Arnette family’s great adventure with John X Safaris – When the stars align… Part 2.
For more information and current updates about John X Safaris; follow us on Twitter, connect with us on Facebook and visit our Website!