Keeping up with the Robinson’s….

It’s a tough job you know. We’ve been at it since 2006 when our good friend, Rich Adams, introduced Steve Robinson and his family to John X Safaris. Since that first East Cape hunt, Steve has been back on numerous occasions, including a Mozambican Cape Buffalo hunt that turned out to be one of our most memorable to date. 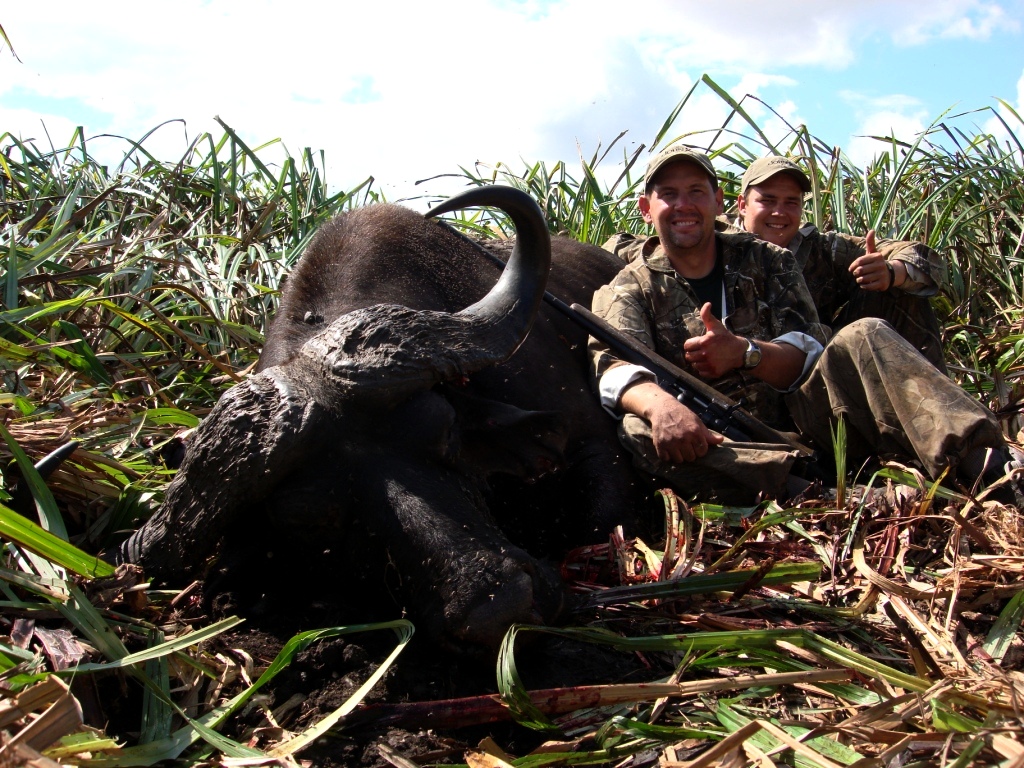 This year saw Steve return on what has become one of our favorite hunts each season. Steve and his son, Hunter, joined Professional Hunter, Carl van Zyl, and his team on a whirl wind East Coast safari. We started out in Zululand, before heading to the Drakensberg mountains, and finally onto base camp.
In Zululand we stayed with our good friend, Glen Haldane, and hunted the interesting Baynesfield Estate. The property is a commercial crop and stock ranch, but the wildlife and conservation ethics over many years have resulted in a phenomenal hunting area. 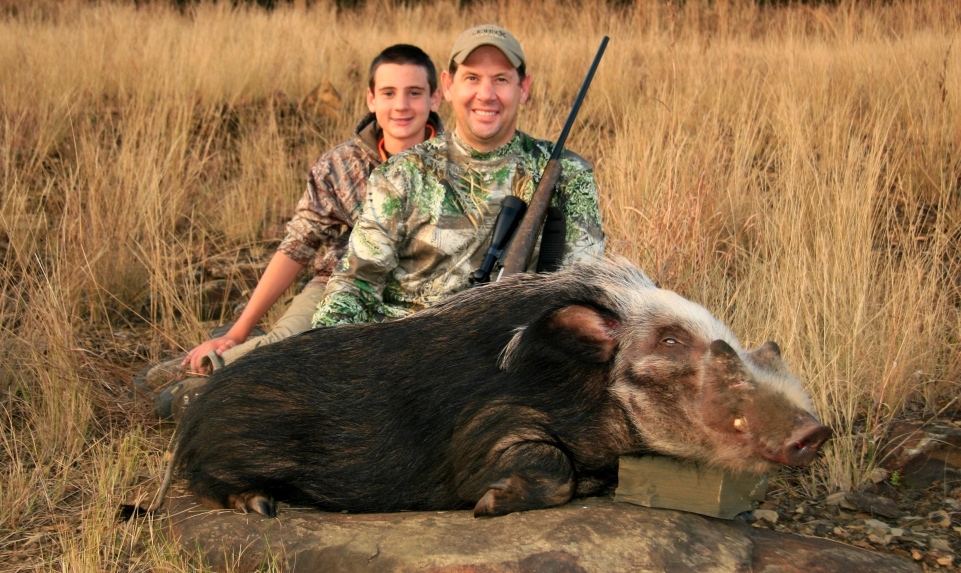 A world-class Bushpig boar at 16.30 that first afternoon only reconfirmed what a treat we were in for.

The following morning saw us turn our attention to Cape Bushbuck, as that is what had drawn us to the area. Steve had hunted Cape Bushbuck in the past, but like so many before had become addicted to hunting these forest dwellers. A ram of 16’’ or more is what caught his imagination – I was determined to deliver.
After having looked over numerous animals during the course of the morning we literally stumbled onto a monster. While driving along the edge of a field we spotted a black shadow in the adjacent thicket. We continued on for another hundred yards before returning on foot. The ram spotted us first and moved into a deep dark hole in the brush, but not before we could determine that he was a keeper. Steve’s first shot went high and the ram took off. With the ram now making a hasty escape Steve led him as he entered the only clearing ahead. 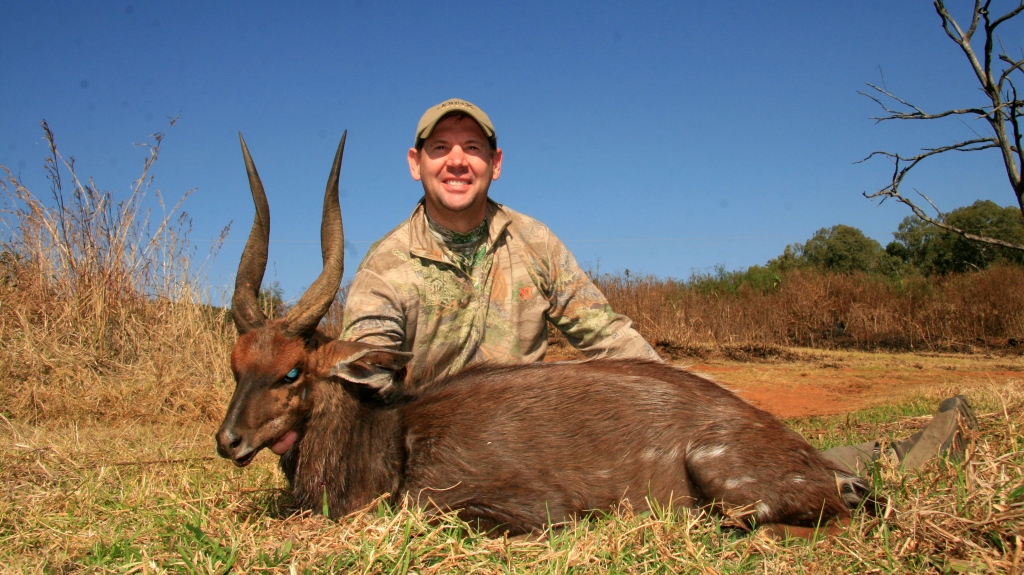 Hunter in the meantime was abiding his time patiently. We’ve got to know him like this; he gives all an opportunity before blowing everybody out of the water. We all knew it; we’d seen it on every hunt to date. Lady luck is his friend, and he sure knows how to keep her close!
For the remainder of the day we searched high and low before retiring to camp for a scrumptious dinner and drinks around the camp fire. It was a day to cherish.
The following morning we were up at 05.30, the weather looked as if it had taken a turn for the worst. We decided to head up the valley in search of Common Reedbuck. 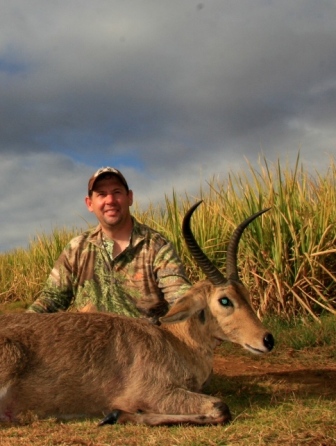 Steve was the first to strike…. 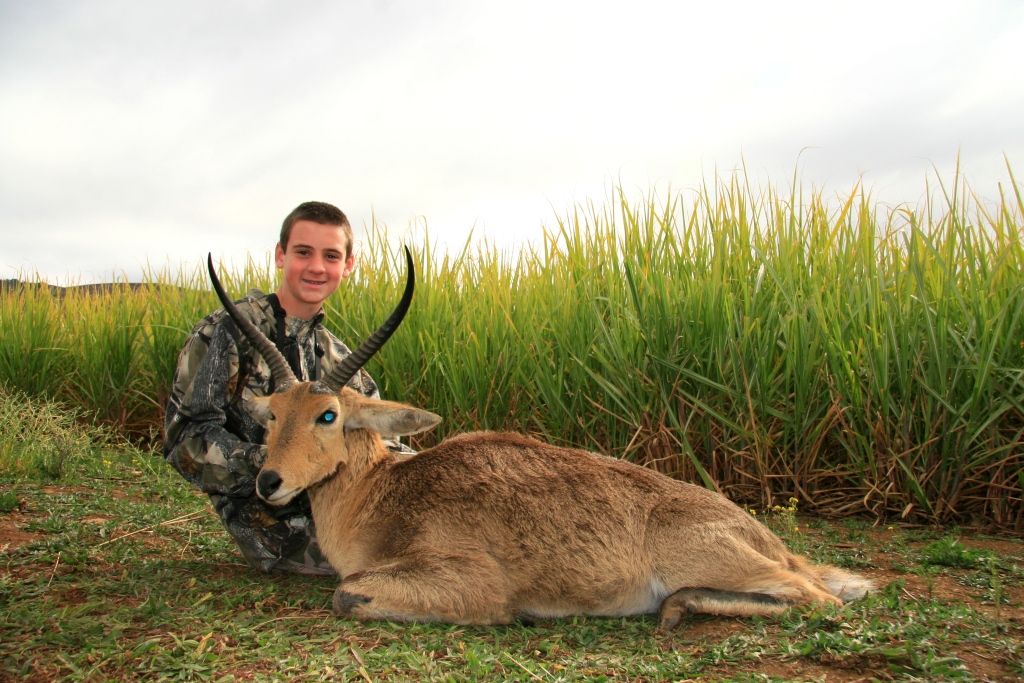 With Hunter not far behind!

By that afternoon we were back at the Bushbuck. We were not leaving for the mountains until Hunter had his ram.
Our tracker, Zwayi, spotted a lone ram in an old corn field. We could barely make him out, but decided to take a closer look with the spotting scope. At first we weren’t sure, but then he grew, and grew… and grew. By this stage we were frantically trying to find a way whereby Hunter could weave a shot through the undergrowth and the remaining corn stalks. By balancing one foot on top of the cooler box, and the other on the salt box, Hunter found his target at a ridiculous gradient. I was about to call it off when I noticed Hunter’s determined look. He knew he could do it, at the bottom of my heart I knew it too. He turned to me for my nod and I gave him the approval. “Make it count,” I whispered into his ear. 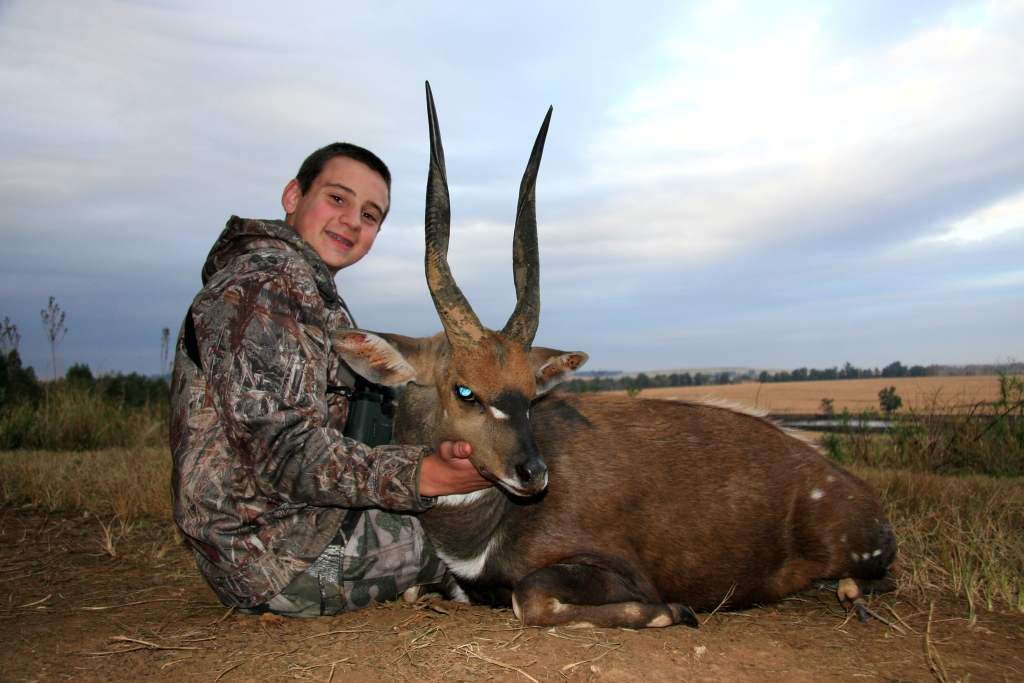 And so he did…. Hunter’s ram came in at exactly 16 3/8’’ too. I’ve guided many great trophies in my career, but I’d be lying if I said this wasn’t one of my best. Forget the length, the size, and the shape… just look at it and daydream… He’s beyond perfect.

That night we all crept into bed early. I hope the rest of the guys slept as well as I did. I had guided the Cape Bushbuck I’d so often dreamt about – a weight had lifted off my shoulders.
The following morning saw us hit the road before day break; we were on our way to the Drakensberg. 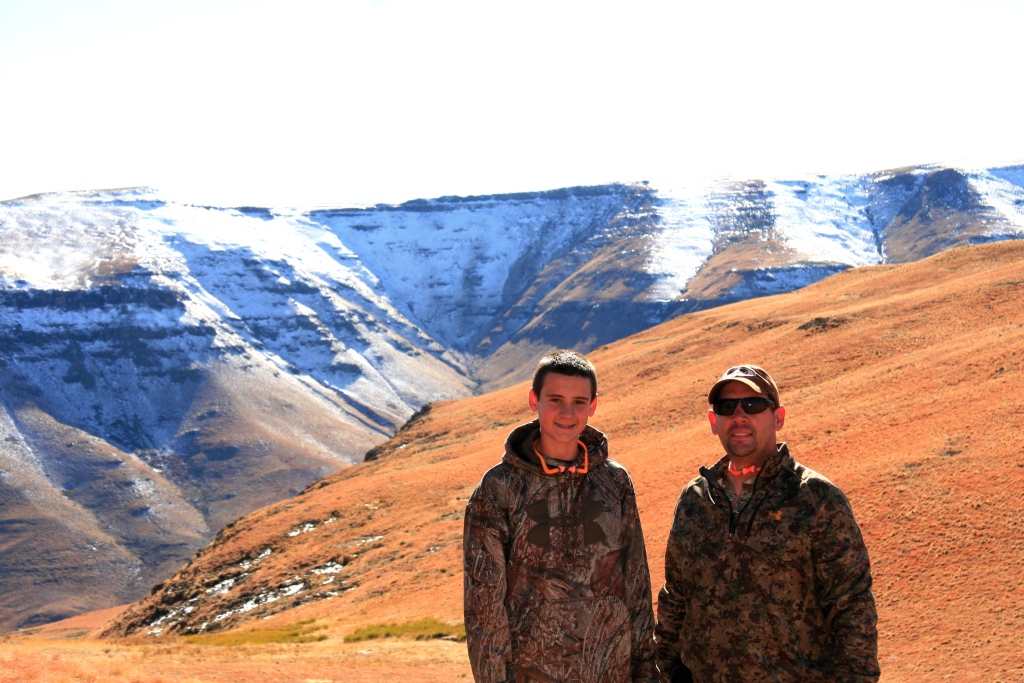 Heavy snow had fallen in the weeks leading up to our arrival, but our stay would prove to produce some of the best weather of the winter.

While the sun was out and the weather looked good we were still limited with vehicle access into the mountains. At day break we’d pack a backpack and leave the truck as far it would take us. From there we’d start our climb in search of the challenging Vaal Rhebuck.

We’d go up and up, until we found ourselves with the Cape Vultures dropping down from the Mountain Kingdom of Lesotho. 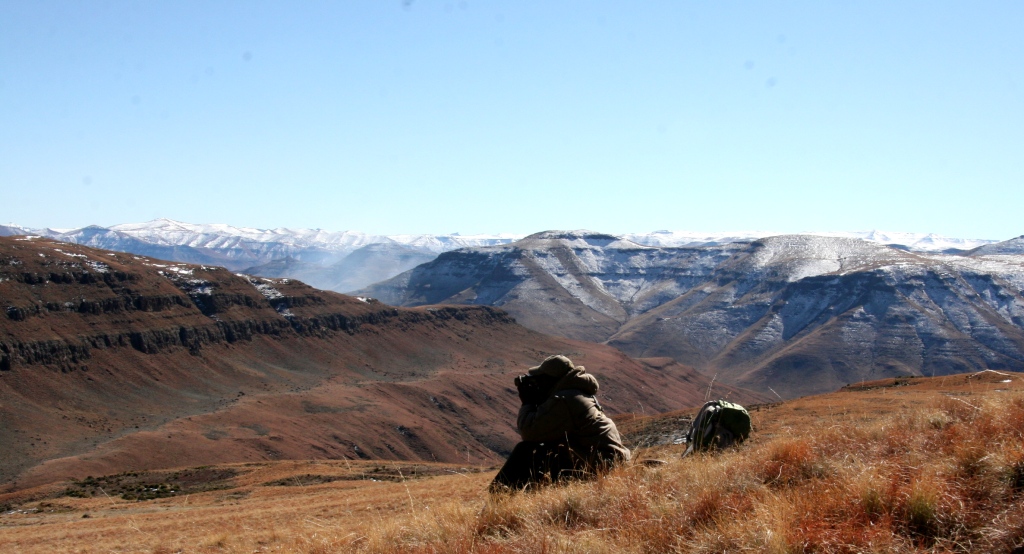 We’d search all day until we found a ram we thought worth pursuing. Often we just sat pondering over our view – the mountains were truly breathtaking.

We looked over a good few rams, finally settling on one that looked the oldest. He had a deep-set body and heavy horns, the best signs of a fully mature male. We stalked the group he was with, but lost them as they entered a secluded valley covered in shadow.  We moved along with caution until finally they spotted us and took off up the draw. As past Vaal Rhebuck hunters will tell you, you rarely spot them first – Vaal Rhebuck always have you covered. 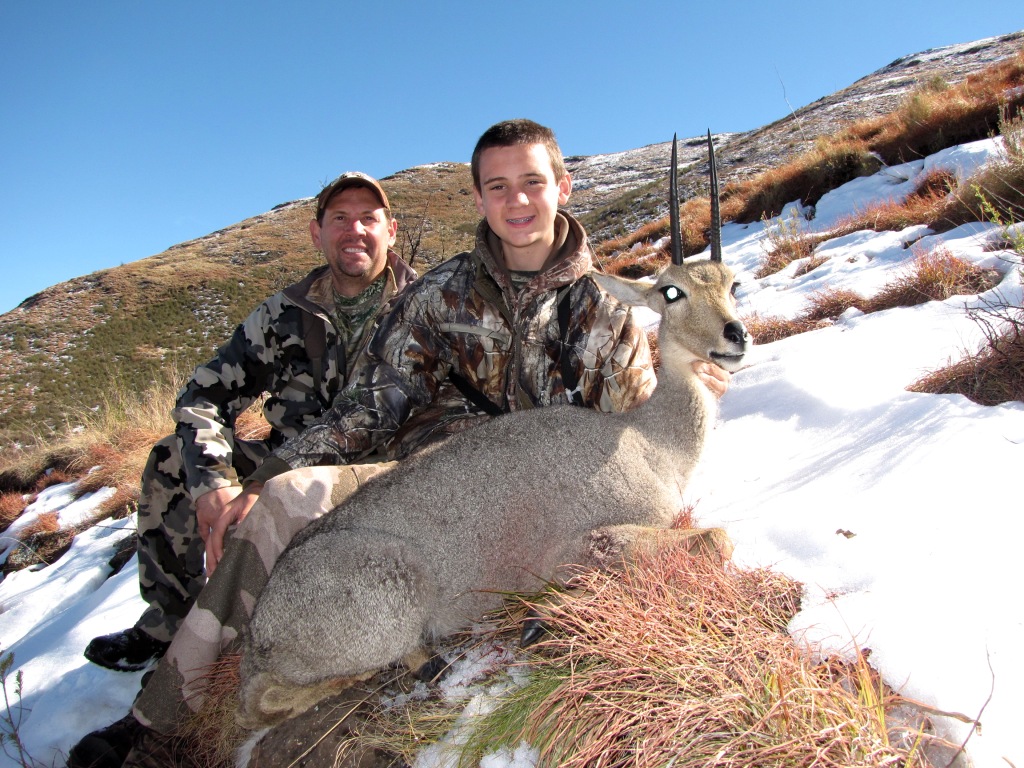 Hunters ram came to a halt at 380 yards. He squeezed of his 257. His ram didn’t move an inch – a well deserved trophy for a deserving young man.

That evening we shared dinner with our friends from the mountains, the Small’s. It had been a hard couple of days; never the less it brought us back to earth after our opening two days in Zululand.
The next morning saw us back on the road. We once again left early in the hope of making up enough time to afford us a Tsessebe hunt. 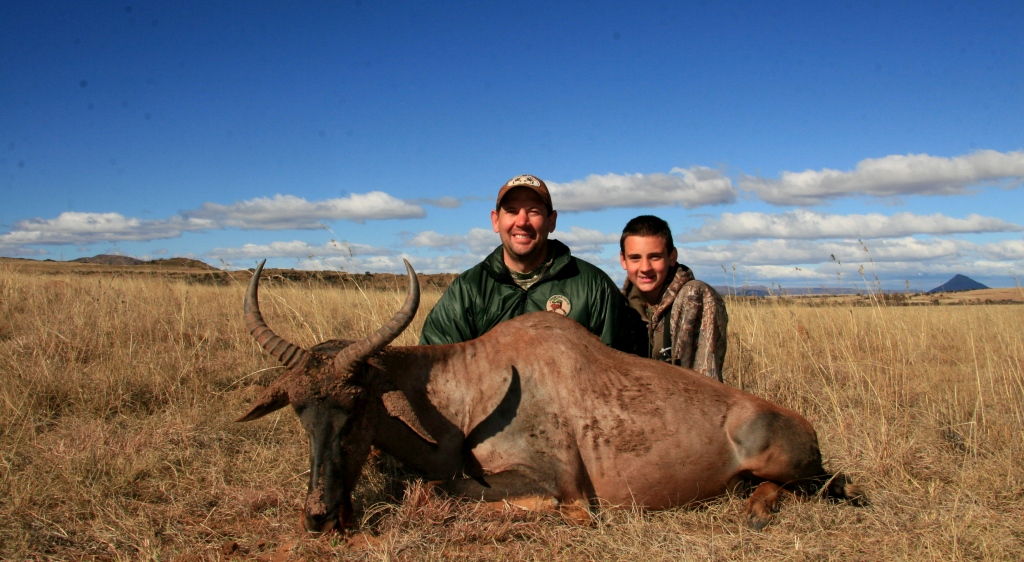 After looking over a couple of lone bulls and the main herd, we settled on a loner. He turned out to be a great bull. A first of its kind in many years.

That afternoon we continued down to the coast. During the course of our journey we were discussing what Steve hadn’t hunted yet, the list was getting shorter by the safari. To our surprise Steve had not collected a Bontebuck. Steve wasn’t overly excited, it’s more a collector’s trophy than a hunt, but the story behind the species is what makes them unique. As I continued on, picking up the loose ends and explaining that this species was once on the brink of extinction, and that hunters had brought them back to where they are today, Steve grew interested. In no time at all I made a phone call and secured a Bontebuck en route for that very afternoon. 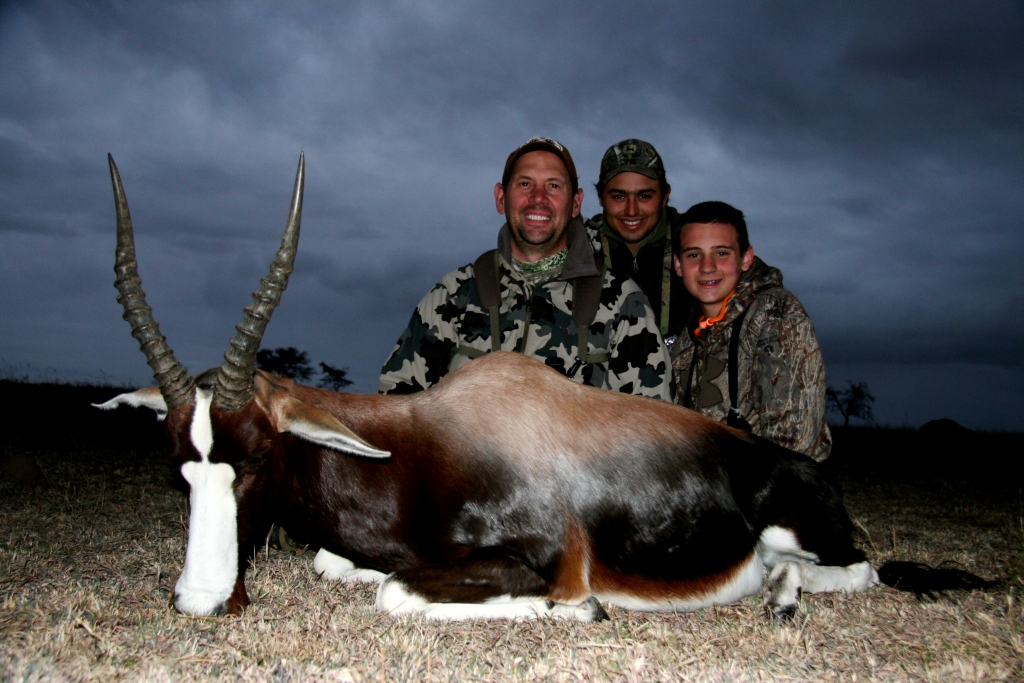 Steve, Jose, and Hunter – A happy team with a beautiful Bontebuck. Adding to our hunting legacy in securing the future of Bontebuck via sustainable utilization.

By now the setting sun had disappeared over the horizon, our quality trophy collection was growing on the back of the truck, and the thought of base camp seemed better than ever. 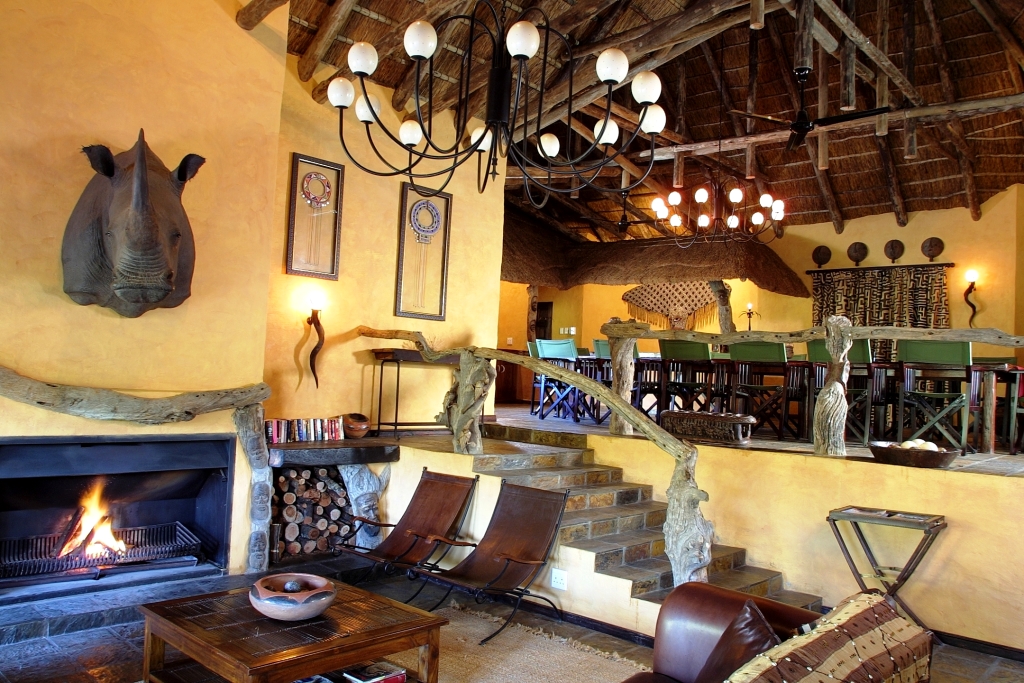 Back at base – it felt good to be home.

With three days to go we started prioritizing our wish list. Steve desperately wanted another Black Springbuck, the one he had hunted previously got dwarfed by Hunter’s monster from our last trip. He wasn’t ready for another year of ragging by Rich Adams! 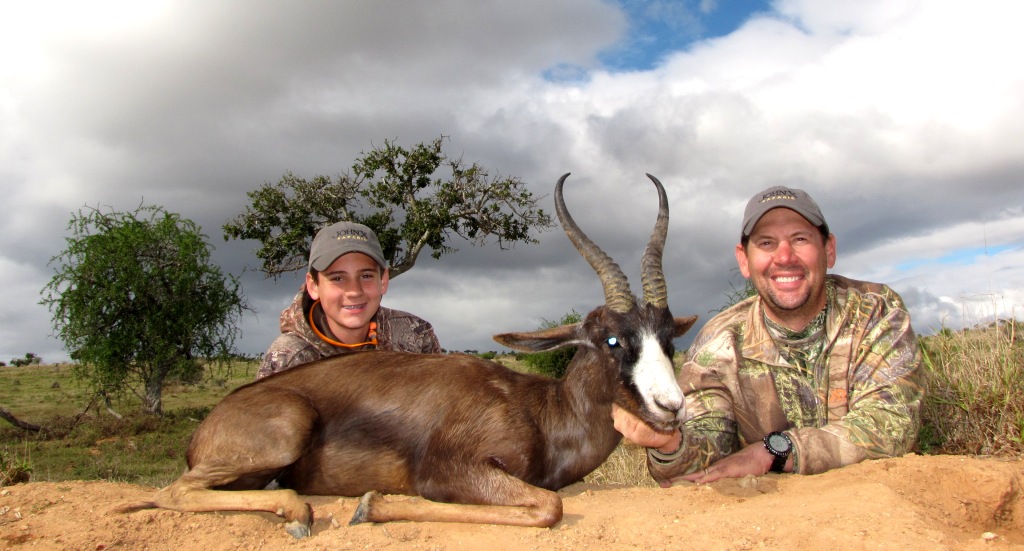 The day started out with a slight drizzle, but things cleared up by midmorning. We had a blast chasing hundreds of wild Black Springbuck across the country side. Steve got a beauty, before helping us secure a spare cape we were after. It turned out to be a truly fun day with some world-class shooting.

With the rain dissipating during the course of the night we headed out after East Cape Kudu the following morning. I had assured the guys, the minute the rain stopped and the sun came out, we needn’t bother with our rifles, bring the butterfly nets boys! 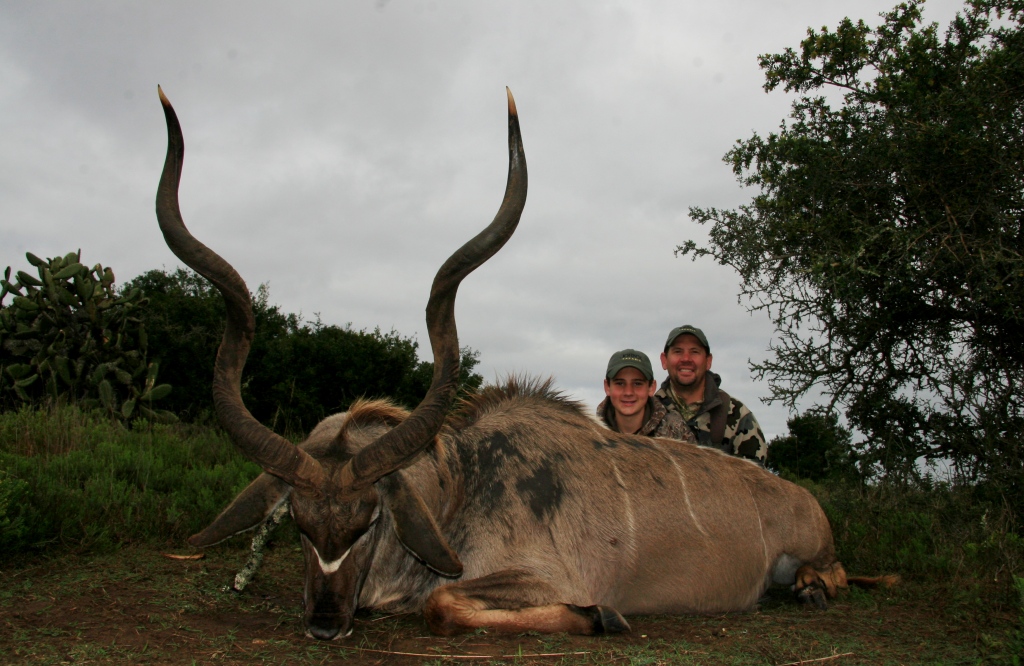 Well not exactly, but pretty close. Within an hour we’d spotted, stalked, and taken a magnificent bull. Strange to think how sun dependant these ghosts of the African bush really are.

The last day of our hunt was dedicated towards a certain Waterbuck that Carl and Jose had spotted during the course of the season. We never did find him, not even a glimpse…

We gave it our best shot, but came up empty-handed. We know he’s there, lurking in the shadows. His image and the sheer size of his presence are imprinted in our minds until the next time we meet.

If it were not for failure from time to time, then what will the reward of the journey be like? They say better be lucky than good, but I say the harder I try the luckier I get… How else am I supposed to keep up with the Robinson’s?!
For more information and current updates about John X Safaris; follow us on Twitter, connect with us on Facebook and visit our Website! 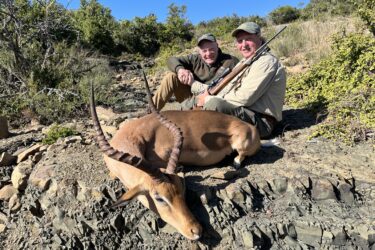 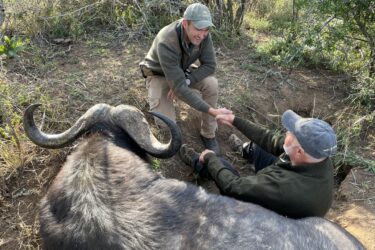