There could be worse places to be than here… 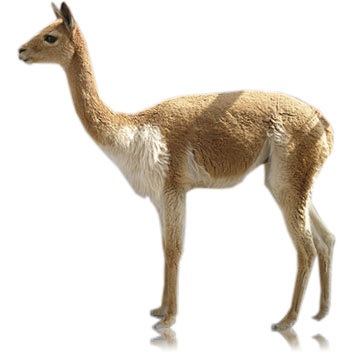 The rhino crisis is at the forefront of the conservation world and arguments, opinions, debates, outcries and valiant efforts to raise funds abound on the issue from every corner. However, very little is actually being done about the crisis and in the meantime, our rhinos pay the price for our inaction with their lives.
Yet, a solution stares all of us in the face – a solution that has been tried and tested, researched and managed and that has delivered an endangered species back to a healthy and growing population after being on the edge of extinction.

Looking back through history, we find another species that was persecuted for a seemingly inane human desire for its product. This species is the vicuña (Vicugna vicugna), a member of the camelid family, similar to a llama but smaller in size. It is native to the Andean highlands of Argentina, Bolivia, Chile and Peru. The product that it produces is the world’s most expensive fabric. The wool of the vicuña is the finest fibre capable of being spun – about 8 times finer than human hair – and it is highly sought-after in the fashion industry. A pure vicuña wool coat will effortlessly set you back over R100 000. A fashion house in Australia advertises a vicuña coat for sale that required the fleece from about 30 animals – costly, when each animal only produces about half a kilogram of wool per year. 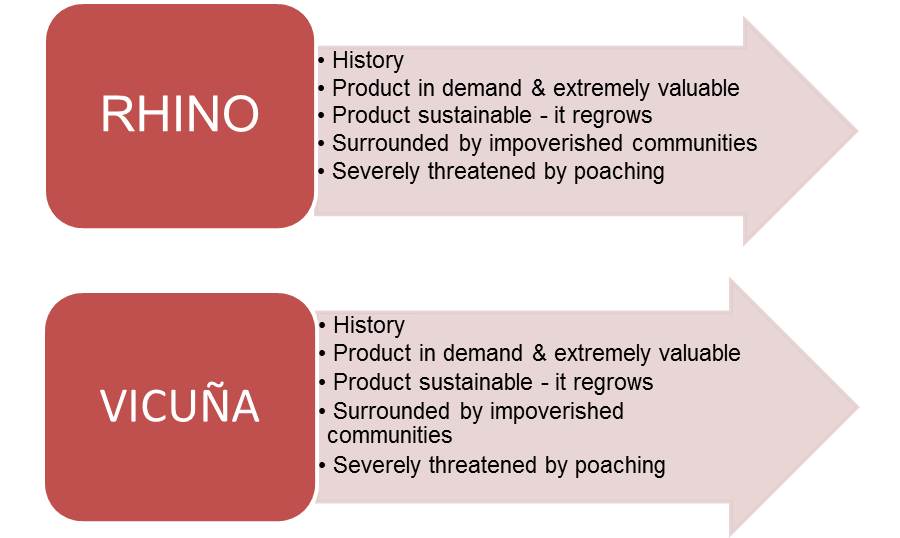 The vicuña has been rescued from the brink of extinction by the combined efforts of conservationists, commercialists, local communities, farmers and some dedicated and proactive individuals. They have provided the framework for saving a parallel species.

So why are our rhino still being killed?

Prior to European colonization, the vicuña was considered to be sacred and only royalty were allowed to wear the wool. This prevented needless killing and vicuña populations were unthreatened by human beings. They numbered approximately 2 million animals.
From the time of the Spanish Conquest to about 1964, there was unrestricted hunting of the species as Europeans discovered the luxurious fibre and it was harvested, at the cost of thousands of vicuña lives.
In the mid-1960’s, it was estimated that vicuña numbers were down to only about 6000 animals – they were teetering on the brink of extinction and they were declared endangered.
In 1966, a nature conservatory was established for the vicuña by the Peruvian government, with the assistance of the U.S. Peace Corps, the World Wildlife Fund and the University of La Molina, Lima. Unfortunately, these conservationists were up against a formidable force of poachers that came from the impoverished local communities and that were employed by the affluent demand of the fashionista.
However, the conservationists were ardent in their goal too and game wardens were trained in conservation and anti-poaching measures but this was a slow, labour-intensive task and it was difficult to incentivize people with the mere offer of a job when the poaching racket was far more lucrative in the short-term.
In 1975, vicuña were listed as a CITES appendix 1 species and all trade in their products was prohibited.
Is any of this sounding at all familiar?
Thanks to the work of conservationists and private ranchers, vicuña numbers started to climb very gradually. The Vicuña Convention was signed by Peru, Bolivia, Chile and Ecuador in 1979. (http://eelink.net/~asilwildlife/vicuna.html) This is a 3 page document that lays out the foundation for the protection of the species. Subsequently, there have been 26 annual meetings and 5 extraordinary meetings and Peru has attended every single one of these meetings, without fail. With this proactive and collaborative approach, the vicuña has benefited by being saved from extinction throughout its range with a joint protection strategy being applied simultaneously in all its range states.
Enter the commercialists…
In the 1980’s, a Peruvian textile company and a fashion designer played a significant role in the vicuña success story. Grupo Inca, the textile manufacturers, initiated the “Shear avicuña to save a vicuña” campaign and developed a business plan where they would pay local communities to protect vicuña populations and gather vicuña wool sustainably. The wool would be manufactured into garments and sold internationally and a large portion of the generated profit would go back to the communities.
The CEO of Loro Piana, an Italian luxury-fashion company, also saw the linked incentives in helping local impoverished communities to provide a ‘cash crop’, satisfying his customers and potentially saving a critically endangered species.

THE LINKED INCENTIVES OF THE VICUÑA SUCCESS STORY

Thanks to the combined efforts of these visionaries, the Vicuña Convention and the conservationist sector as well as the fact that vicuña numbers were climbing, CITES agreed to lift the trade ban on parts of the vicuña populations of Peru and Chile. They were listed as Appendix II species, strict control measures were put in place for certain herds and all farmers had to comply with CITES regulation but vicuña could be farmed, herded, sheared and their wool sold on the world market, without a single animal coming to any harm.
A national survey of vicuña in Peru alone in 1994, revealed that their numbers had jumped to about 66 500 animals – a staggering 1100% turnaround!
In 1994, CITES relaxed the trade ban for vicuña in all of its range states and the majority of populations were listed as Appendix II species, for the exclusive purpose of allowing trade in their wool and with restrictions on this trade.
In 1996, the National Council for South American Camelids (CONACS) started a programme based on community-based wildlife management (CWM). As the vicuña is a migratory species that covers millions of hectares of land, the Council understood the importance of educating, training and garnering support from the local communities. These people had been struggling to survive in the harsh terrains of the high Andes for centuries and traditional values and ecological knowledge would enable them to make a valuable contribution to the fight for the vicuña, as well as provide a much-needed income.
CONACS organised traditional ‘chaccu’s’, where community members herd vicuña in a corral, capture them and shear them before releasing them back to their grassland habitats. CONACS is also deeply involved in the conservation of all camelids in South America and Gabriela Lichtenstein, chair of IUCN’s South AmericanCamelid Specialist Group, has done extensive work on the link betweenvicuña conservation and poverty alleviation.
Just 3 years later, in 1997, Peru’s national survey of vicuña counted just over 100 000 animals and in 2000, there were 120 000 animals.
The Peruvian government has a labeling system that identifies all garments that have been created through government-sanctioned chaccu. This guarantees that the animal was captured, sheared alive, returned to the wild and will not be sheared again for another two years.
The last survey, done in 2007, has placed Peru’s vicuña population at 188 000 animals (55% of the global population), with the entire vicuña population, in all of its range states at 342 727 animals – an incredible feat in a mere 5 decades and an undeniable recipe for success. . .

In stark contrast to the vicuña’s growing numbers, poached rhino numbers in South Africa look like this: 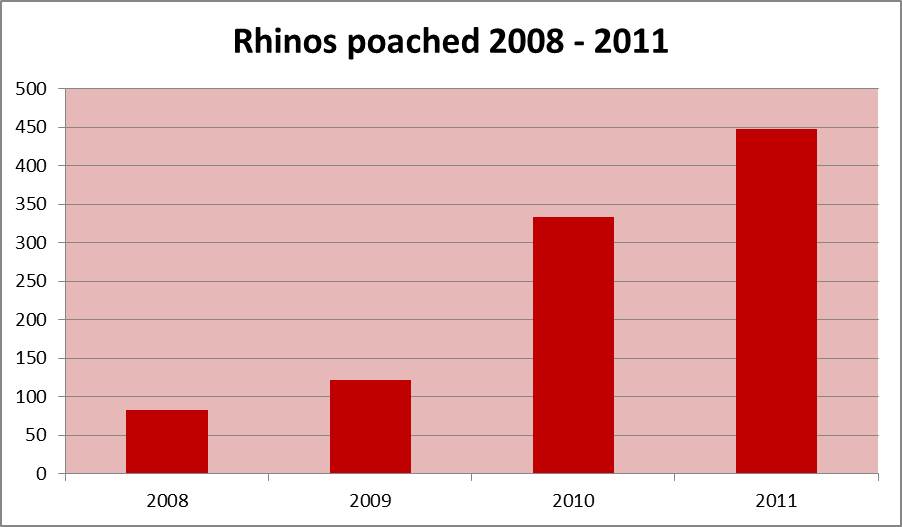 Poaching and habitat destruction are still very large threats to the vicuña and for as long as vicuñas continue to grow a product that human beings desire, these threats will loom over them. As their fleece is so valuable, a thriving illegal trade still exists and some countries have banned the importation of vicuña fibre for the animal’s protection. This action, however noble, has very little effect on the black market, which simply develops stronger conduits, or on consumer demand.
The IUCN still has active conservation programmes in place for the vicuña, the Vicuña Convention is still held every year and this year, the 20th traditional chaccu will be held in South America.
Although the task of protecting the vicuña will never become any easier or less intensive, the guardians of the vicuña may hold their heads high with the objectives they have achieved and the innovative, collaborative approach they used to solve a multiplicity of problems.
We, however, should hang our heads in shame. The rhino crisis has become an emotional and political bickering – a tug of war with a species that is crying for our help – with all sectors pulling in different directions. We expend so much valuable energy on arguing and armchair activism and heated opinions when we should be organising our very own Rhino Convention – why have we not had one already?
We need more market research on whether legalised trade in rhino horn is viable and sustainable but how are we supposed to research a hypothetical, opinion-based idea?
The framework already exists for a management plan – all we have to do is look to the vicuña example.
Four distinct objectives exist in the debate for saving the rhino:

Conservation, commercialism and communities must join forces.
Conservationists have the foundation, the means and the network to lay out the framework for our Rhino Convention. All conservationists understand that every aspect of solving an issue must be viewed holistically if it is to be effective. All conservationists understand the benefits of education, community upliftment and collaboration.
Rhino farmers have the means, the knowledge and the experience to farm rhinos and increase their numbers. They spend voluminous amounts of money and time on the upkeep of the rhinos, management programmes, protective and anti-poaching methods, vet fees and all other aspects of game farming. Naturally, they stand to gain financially if trade in horn is legalized but this is business, not capitalism. The government would still have full control over numbers and permits and regulations. Who cares how much money the farmers make, as long as they are contributing towards saving the rhino? At present, small-scale rhino farmers are selling their rhinos as they are so disheartened by the risks they face in keeping rhino, not to mention the resistance they are up against from national environmental agencies and rigid animal rights and conservation organisations. Every rhino farmer that gives up is one less person fighting to save rhino.
These farmers should be applauded and encouraged and aided in every possible way. In fact, they should be offered incentives to farm rhino. Naturally, there should also be national regulations and control measures to ensure ethical and sound practices.
We should be training and encouraging impoverished communities to breed and preserve and even farm rhino, before teaching them to become an anti-poacher or a game warden, who will end up earning minimum wage to risk their lives until someone makes them an offer that they cannot refuse to assist in poaching the very rhino they are protecting.
If we could shift our own paradigms for one moment, do you not think that we would happily give a regenerative part of ourselves every few years (like hair or nails) in exchange for a long, happy, prosperous life and the ultimate survival of our species?
It saddens all of us to see dehorned rhino but it is certainly better than seeing bloody, mutilated, dead rhino.
Can we put our differences and opinions and emotions aside to band together on this mission? A unified force is very much stronger than a divided, angry one. We are all responsible for the sad state of the rhino and the other endangered species on the planet. We are all accountable for what happens to these species in the future. We are all capable of understanding that our limitations are directly affecting the plight of the rhino.
Although our views are so divided, our ultimate objective is the same – to save the rhino.
We need to expend more energy on building onto the foundation that has been laid for us by the vicuña guardians. Vicuña numbers continue to climb, conservation efforts remain active and effective, communities are benefitting from the profits made and most importantly, more and more vicuña run wild and free every day.
Let’s do the same for our rhino before it is too late! 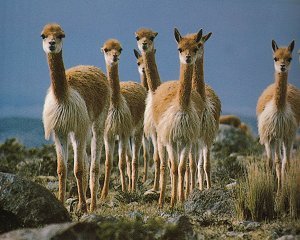 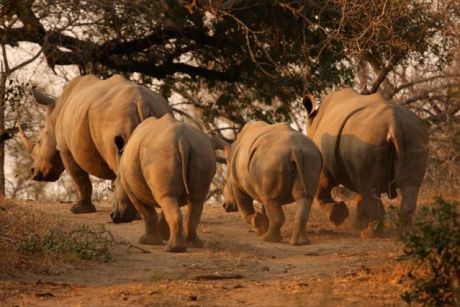