The story of OUR East Cape Kudu Hunt…..

We first met Randy Spence and Emily Belue at the Dallas Safari Club through our good friends the Arnette’s in early January 2013.
At that stage we’d been in correspondence over email, but had never met. As I saw a couple approach me early one morning I just knew this was them. Kristie Arnette had described Emily to perfection. A fun-loving happy individual! Randy was quieter at first, but over time I’ve come to know a great guy and made a good friend.
Their safari was to be their first hunt with John X Safaris, and their maiden trip to Africa. The hours of waiting soon turned to days, weeks, and months. May finally arrived and so did their safari!
An excited Randy and Emily arrived in Port Elizabeth and spent the first night in town before we collected them for their safari.
Our safari would see us hunt from our coastal and northern areas, experiencing the magic of the coastal region and the querkiness of the quiet Karoo with its dark starry nights.
We met many a stranger and came away with even more friends. We witnessed Africa in all her glory. Experienced the Big 5 on game drives, to Elephants and their rumbling stomachs outside our tent at night. We hunted hard, got treated to a couple of lows, but were fortunate to come away with many more highs. We harvested our own game, cleaned it, prepared it, and then cooked it over a crackling wood fire. We saw Africa through the eyes of the poor and gave back to those less fortunate. We got involved and allowed Africa to involve us. We took on each day as if it were our last and made the most of  the wonder of an African safari……

While there were many great moments and hunts, there was one particular hunt  we enjoyed most of all. It’s often a favorite for most, and was certainly the highlight of our safari.
This is the story of OUR East Cape Kudu hunt….
Kudu hunting is addictive. Some of us love it, others don’t see the fuss or understand the passion for pursuing these gray ghosts.  It’s a matter of personnel choice. Ask the team of PHs at John X Safaris what’s their favorite game to guide and 80% will come back with a quick reply, “Kudu”. Ask me, and I’m more hesitant. It’s just that there are certain periods in the year when Kudu vanish off the face of the earth. Where they go nobody knows? But come next season and the start of the rut, they’re popping up behind every bush. And it is at this time that Kudu hunting is at its most exciting. Lucky for Randy he found himself slap bang in the middle of Kudu hunting paradise!
Randy”s Kudu hunt started like many before, at 5am that first morning. Right off the cuff we started spotting a number of Kudu, but nothing worth pursuing. At mid morning we bumped into a great Warthog – it wasn’t a Kudu, but the hunt was on.
Our boar was feeding in a clearing below our glassing position. With a number of Kudu sharing the same area we knew the trick would be to go as undetected as possible while covering the final 200 yards to our boar. 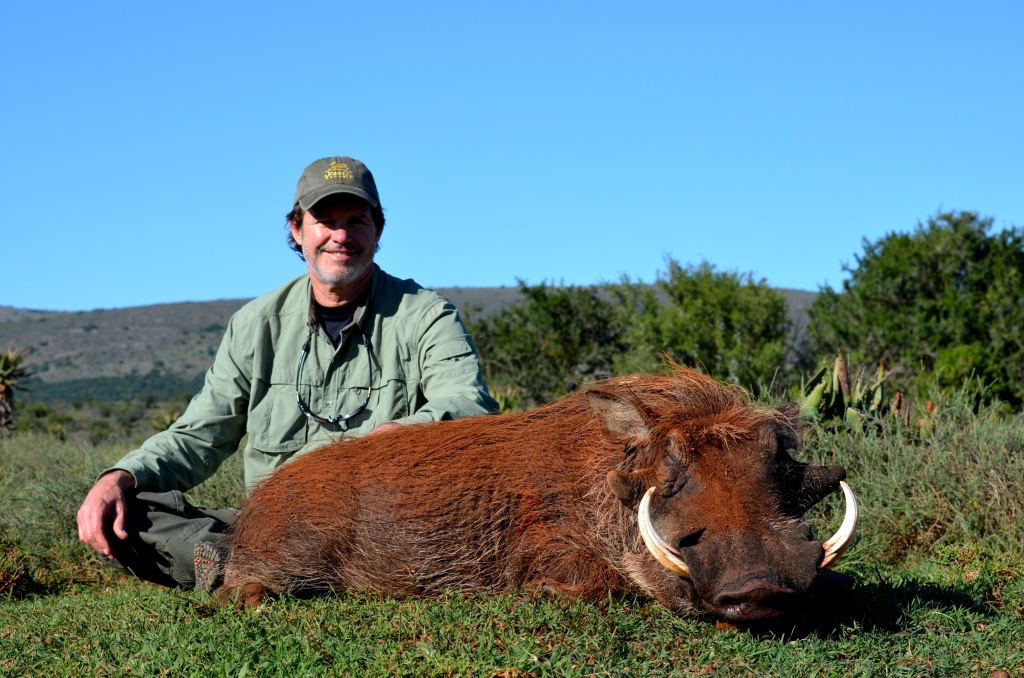 With a steady breeze and decent cover we were able to get within 100 yards of our pig, not a Kudu, let alone the Warthog even knew we were there until the 300 WinMag roared into life. Randy’s African safari was off to a great start!

It was midday, day one, and our pig was in the salt – an exciting afternoon of Kudu hunting lay ahead.
With a back pack stocked with a good supply of water and all the necessary equipment, Randy and I set off on an afternoon of wandering. The rut was in full swing and the thought of the possibility of a number of bulls being active throughout the afternoon proved a pretty exciting aspect.
A slow start at first soon materialized into a shooter bull appearing out of nowhere to clear the field below us. Just as he’d appeared – he disappeared.  I could see the look of amazement on Randy’s face, how could he have come so quickly and then dashed our hopes even quicker? Welcome to Kudu hunting my friend, the ghosts had started their age-old game once again. I wasn’t going to share that with Randy, it’s best he figure that out on his own. It’s what makes Kudu hunting the sport it is.
Later that afternoon we spotted him again, this time much closer than where we’d originally spotted him, but he was 300 yards off and dusk was upon us. It was time to call it a day, head back to camp, and see what Emily had been up to during the course of the day. 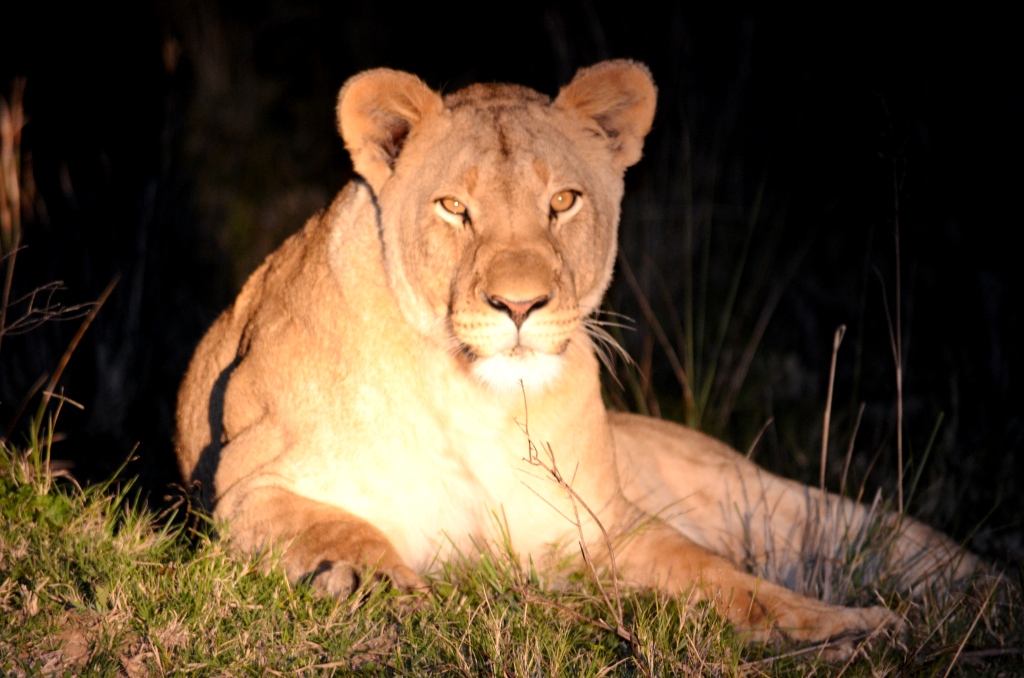 Emily had opted for a day of R&R while us boys were out hunting. Something tells me she enjoyed a pretty successful day of R&R with the camera too!

The next morning saw us up at five again. A quick cup of coffee and light bite to eat and we were off in an easterly direction. Today would once again be a Kudu day.
Zwayi our trusty tracker had spotted a great bull a couple of days earlier and was adamant we try one particular area. The area he had his heart set on was an open plain running along the top of two deep wooded ravines, the perfect home for a large population of Kudu.
As we approached the clearing we spotted him immediately, there he was – just as Zwayi had predicted. A magnificent old bull.
Immediately we gathered our gear and headed for our quarry. Deja vu – the one minute he was there, feeding contentedly in broad day light, the next he was gone. It felt like day one all over again.
With disappointment we headed back to the truck. 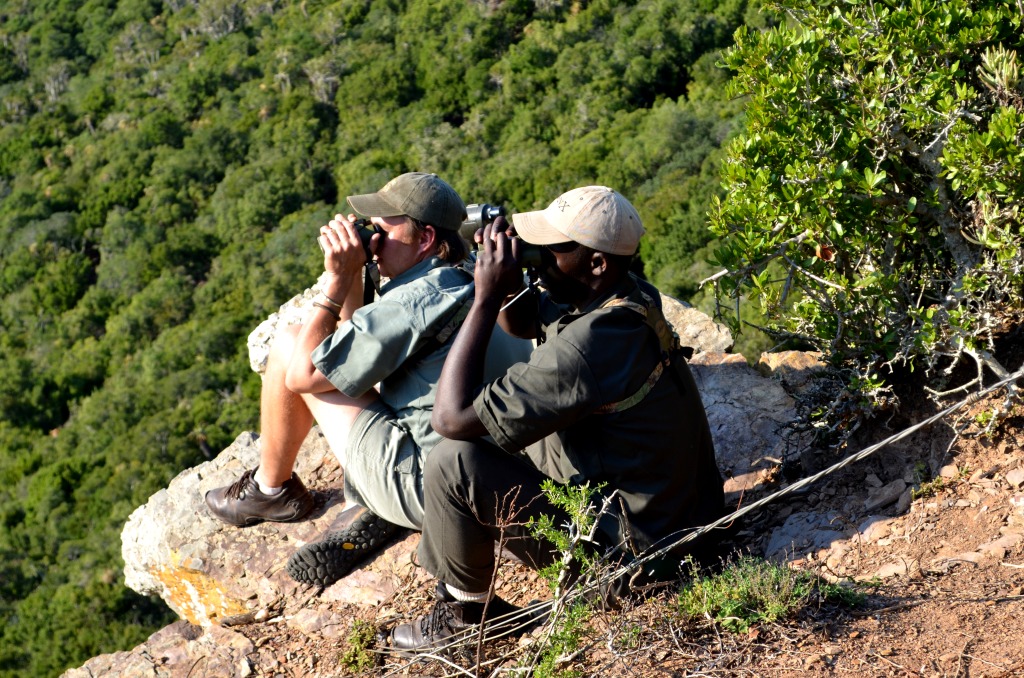 It was still early in the day and there was so much to still see in this beautiful area. 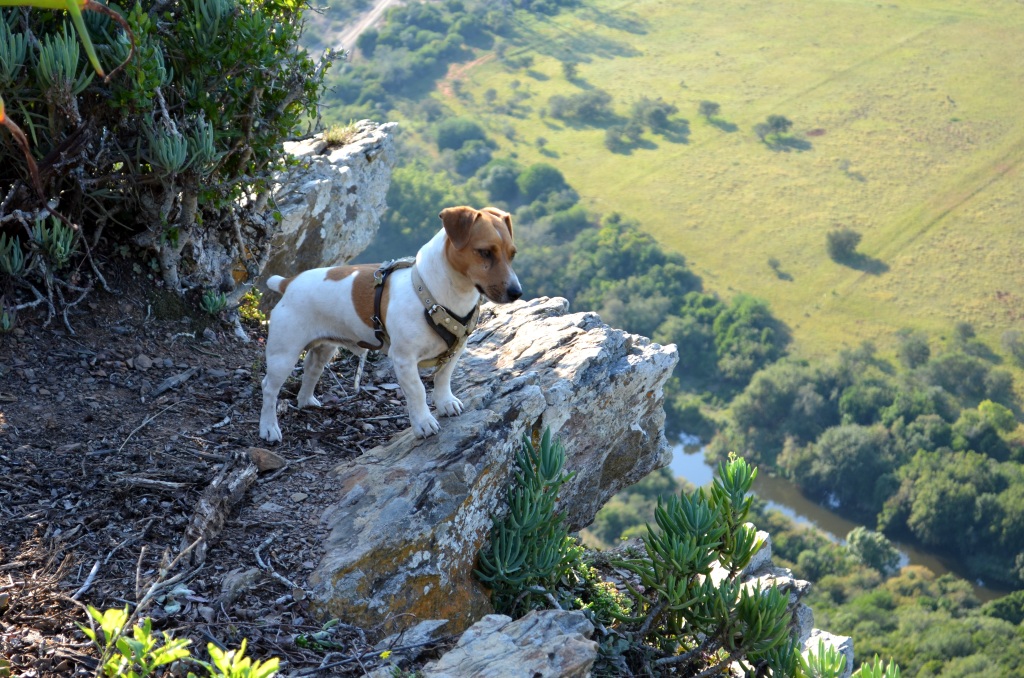 The views for one were spectacular…

By midday the temperature had peaked to 90 F, no Kudu, let alone any other game were going to move during the hottest part of the day. It was time for a pick nick lunch and a minute to rest weary glassing eyes.

By four that afternoon the game was on, things were starting to look good. Our weary bull from earlier in the day had made a sudden appearance once again. Randy took one look at him and needed no second invitation.

With so many other eyes in the form of Eland, Impala and Blesbuck, sharing the same area as our bull, we decided to take the safest and longest approach. By theory we should go unseen, but one never knows with so much game about. 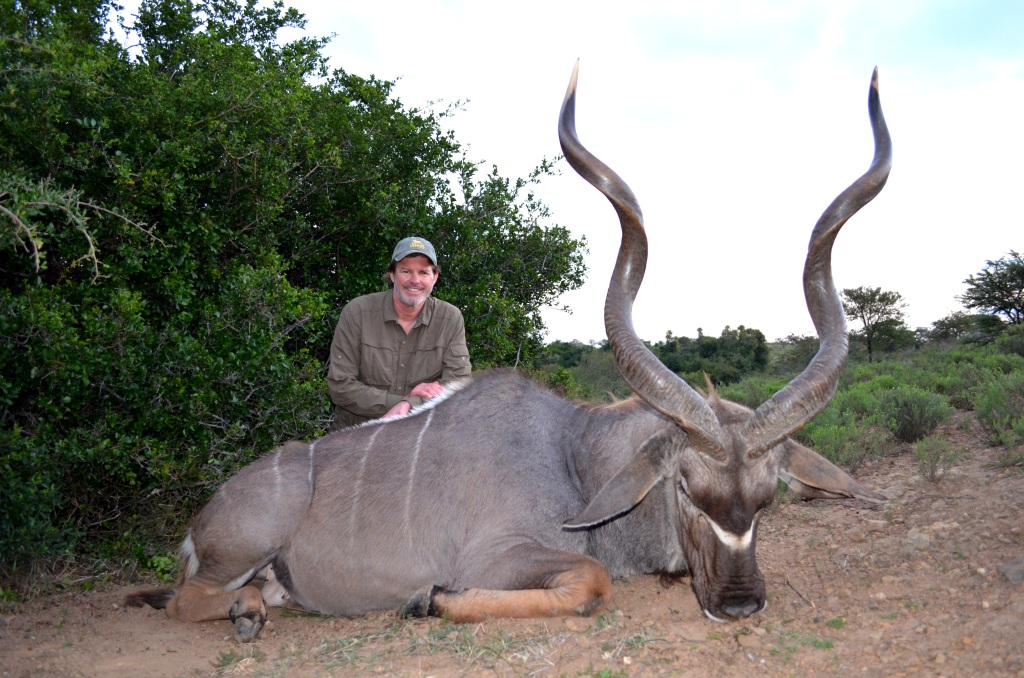 Perfect in ever way….. An old warrior past his prime. The perfect bull to take. 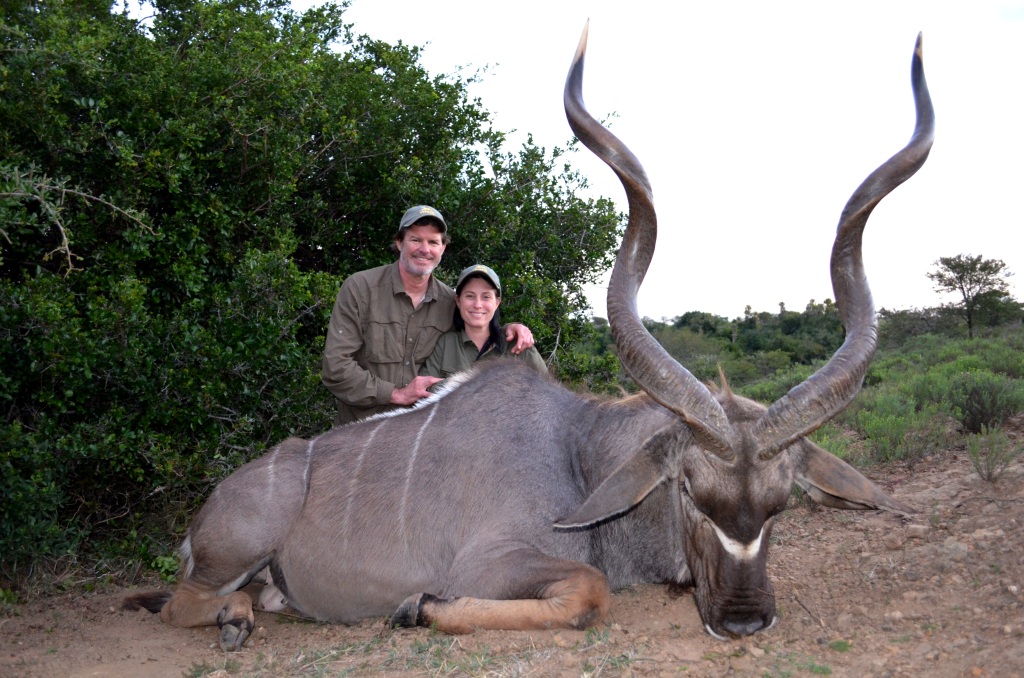 Having Emily along on Randy’s Kudu day was as much a highlight as hunting our bull. Her excitement is infectious to say the least, let alone her fun nature she brings along to every occasion.

That evening called for a celebration in camp, Randy had hunted his dream Kudu, Emily the love of his life had been along to share in the adventure, while I was content with the experience I was able to “provide”. I say “provide” in a hesitant manner, for that we have Africa and a magnificent Kudu to thank. The fact that we were in the right place at the right time is a matter entirely of its own. 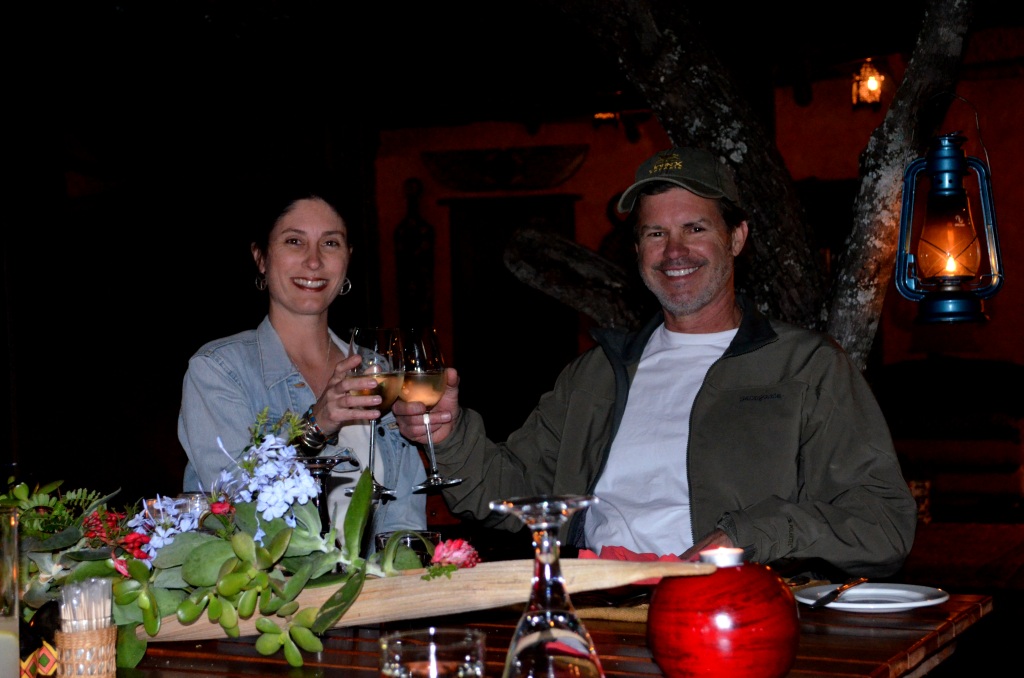