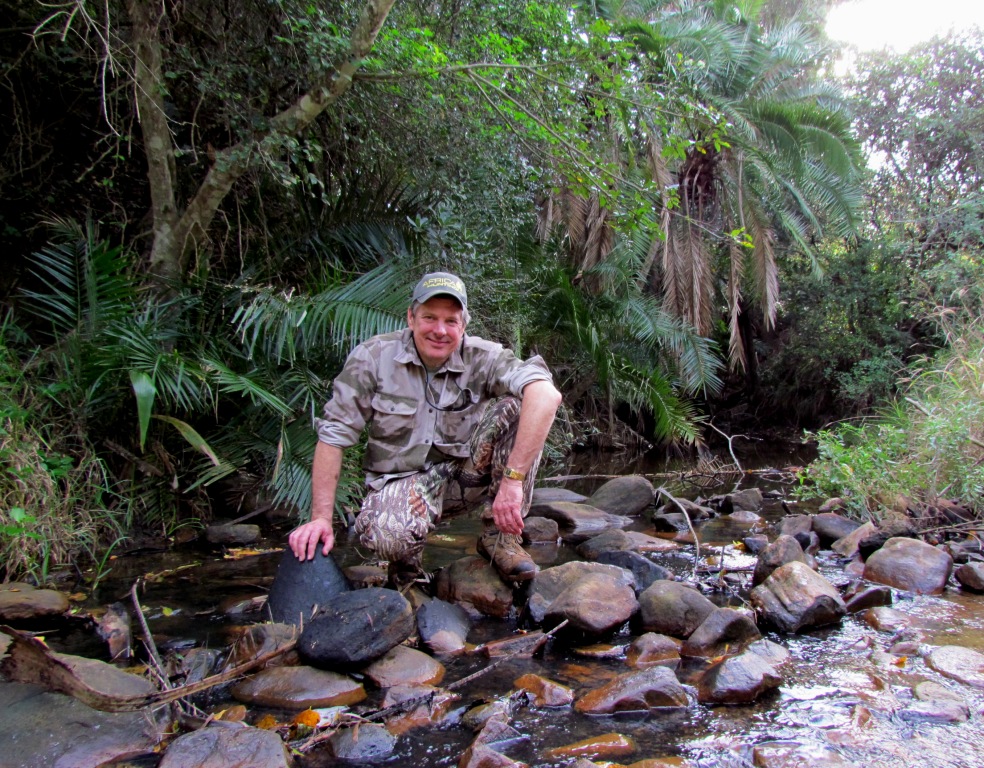 Daylight was fading fast and another fantastic day on safari was drawing to a close. Carl van Zyl, my professional hunter and owner of John X Safaris, and I sat side-by-side on the ground overlooking a small grassy valley just outside a heavy line of brush. Even thought I had taken a very nice Nyala two days before, we were hoping another would appear. My good friend, Steve Dahmer, wanted a beautiful Nyala in the worst way and in three days he had not come up with much. Carl and I had staked out an area known for good Nyala, hoping to spot one for him while Steve and his professional hunter searched elsewhere.

The day started with a bang for me – literally. Caracal was on our menu, and Carl induced me with tales of baying hounds, dumping off into steep ravines, crawling through nearly impenetrable brush in the heat, trying to catch up with one of the elusive little cats. The houndsmen were going to start at first light, and Carl and I would meet them a couple of hours later, hopefully with the hounds on the fresh track of a cat. 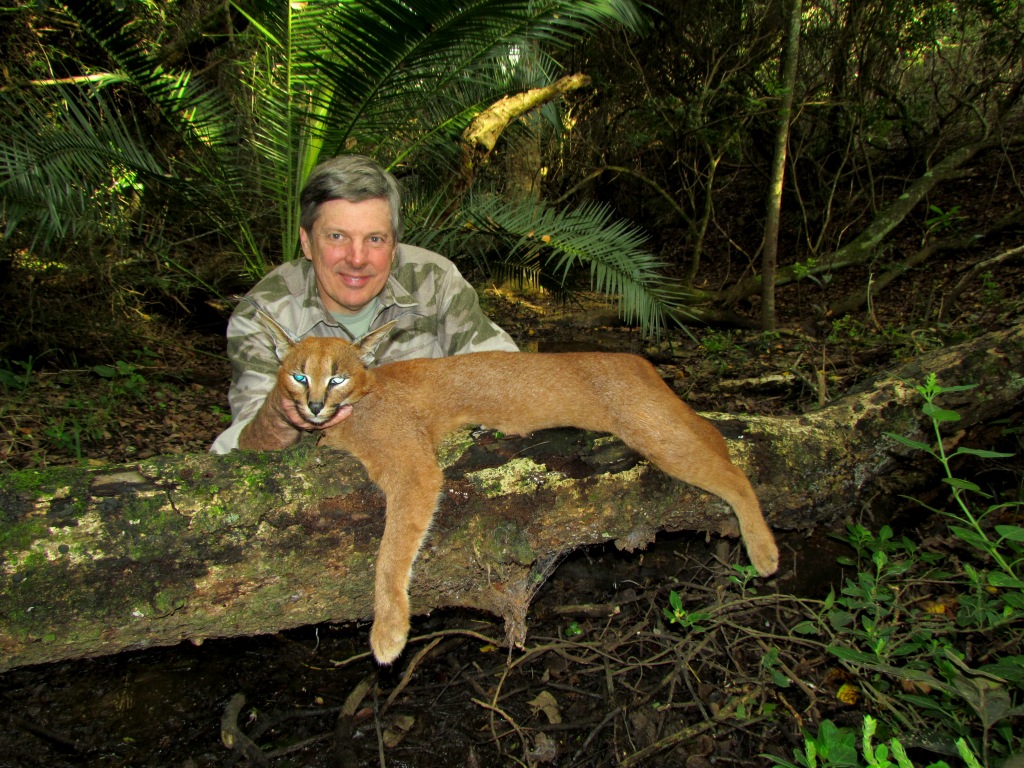 Sometimes things work out too well. We were still on our way to meet them when we got a call that the hounds already had a Caracal treed. We arrived at their location on a pineapple plantation to find the cat treed about 20 yards off a road in a creek bottom that wasn’t all that steep. The setting looked much more like tropical Hawaii than South Africa. It wasn’t quite the experience I was expecting or hoping for, but if a hunt is going to be atypical, better an easy, successful hunt than a long, hot, difficult day that comes up empty.
On a plains game hunt in South Africa, it is not uncommon for some hunters to take three or four animals in a single day. I never have been a multiple-trophy day hunter, partly because I don’t have the budget for an unlimited number of trophies and I don’t want to end my hunting with several days left in my safari.

But another part of me thinks it is almost disrespectful of the trophy you have just taken to rush out and immediately shoot a couple more. I like to savor the trophy in the salt and wait another day to resume hunting in earnest. Thus, after my quick Caracal hunt, Carl and I decided to meet Steve and his professional hunter, see what their luck held, and maybe help them scout out a Nyala. As we were leaving the plantation, we met a truck over-loaded with fresh pineapple and several farm workers. After a brief conversation, Boy, our tracker, talked the laborers out of a few pineapples. 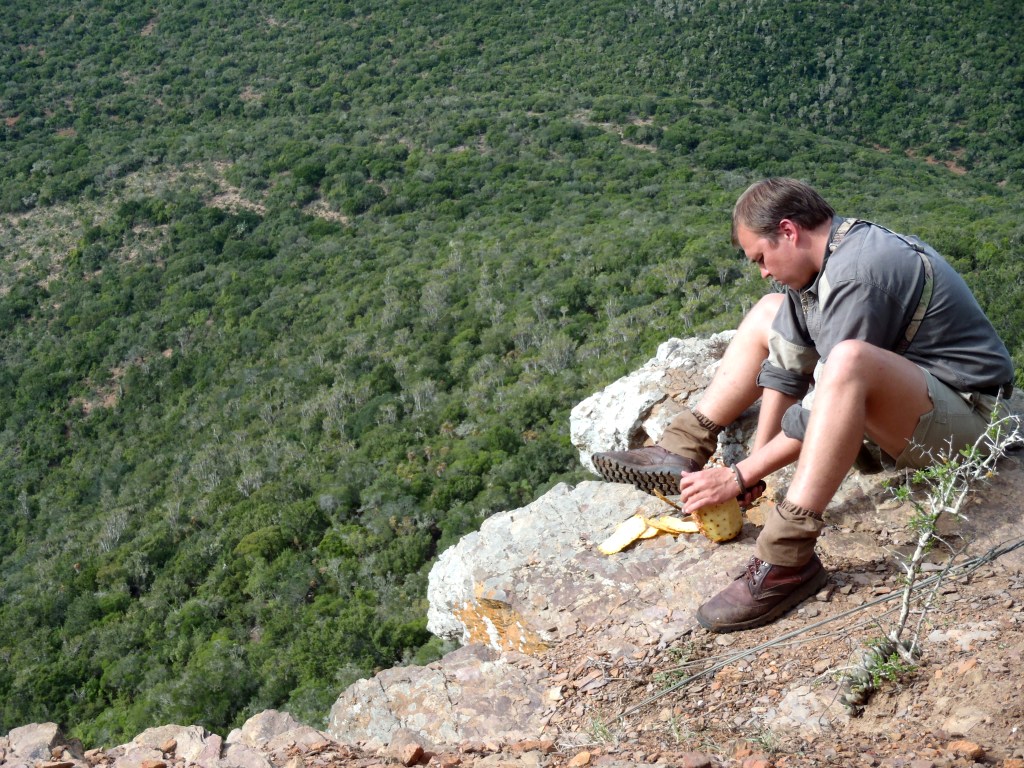 Late morning we met Steve, his wife Lisa, his professional hunter, Juan McDonald, and their trackers on a ridge overlooking a wide area of brush and fields. We spent several hours enjoying the day, doing some glassing and eating lunch and bonus fresh pineapples. We spotted a Bushbuck and some Nyala that were not yet big enough, some Zebra, and a very respectable Waterbuck. The Waterbuck was lucky that Steve did not have one on his trophy list and that I had taken a magnificent Waterbuck in Namibia a couple years before that would be very difficult to better.

As the afternoon progressed, Carl, Boy and I left the other hunters and headed to the area Carl planned to watch for the last hours of the day. We left Boy with the truck, while Carl and I worked our way downhill and through brush until we arrived at the place we would sit until nightfall. We slipped just out of the heavy vegetation and sat with it to our backs, watching the little valley.
There were Zebra and impala in the valley that did not see us ease into position and the wind was perfect. We first had Zebra, and later Impala walk by us at less than 20 yards without a clue we were there. We enjoyed the scene and animals as the late afternoon transitioned into evening, although a Nyala for Steve never made an appearance. I knew it was about time to head back to the truck. It was an amazing experience even though I had not fired a shot.

Carl turned to me and whispered, “I think its time we head back.” However, looking past me, he added, “There’s a Duiker, right there. It looks like a pretty good one.” Looking to my left, I saw a Duiker that had come out of the brush, not more than 20 yards away. Carl raised his binoculars for a detailed examination. “That is a magnificent Duiker,” he said after a quick evaluation. “I don’t know what you think about these little antelope, but if I were you I would take him,” Carl said. 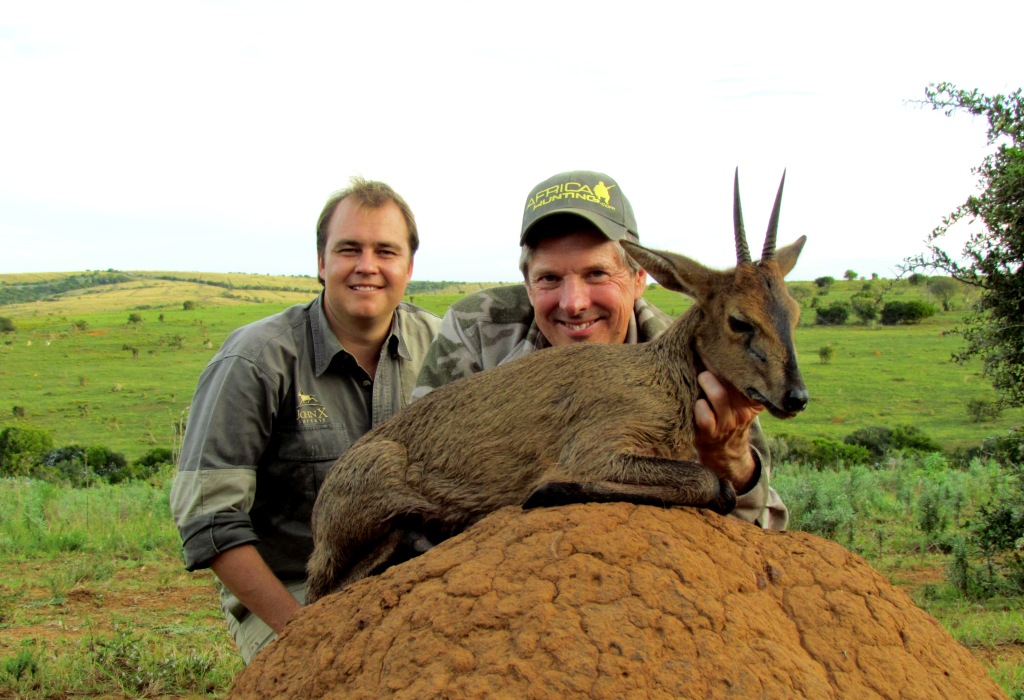 In a couple of prior plains games safaris, I learned that often the key to taking exceptional trophies is to take advantage of unexpected opportunities. And within a few days hunting with Carl, I quickly learned to trust both his ability to judge trophies and his high standards for what he recommended to harvest.

I slowly twisted to my left and rested my rifle on my knee. It was a bit of an awkward position, but the range was so close. I touched off my .300 Winchester Magnum, which was overkill for the tiny trophy. As we gathered up the little antelope and took some pictures in the fading light, Carl mentioned that it was the best common Duiker taken by a John X hunter in probably five or six years.

Every day on safari is a unique and precious experience. You quickly learn to expect the unexpected and realize that something wonderful can happen up to the last possible second of shooting light. I have the Caracal and Duiker mounted together in a chase scene, always bringing back fantastic memories of the start of a magnificent day and the last moment magic, plus everything in between. 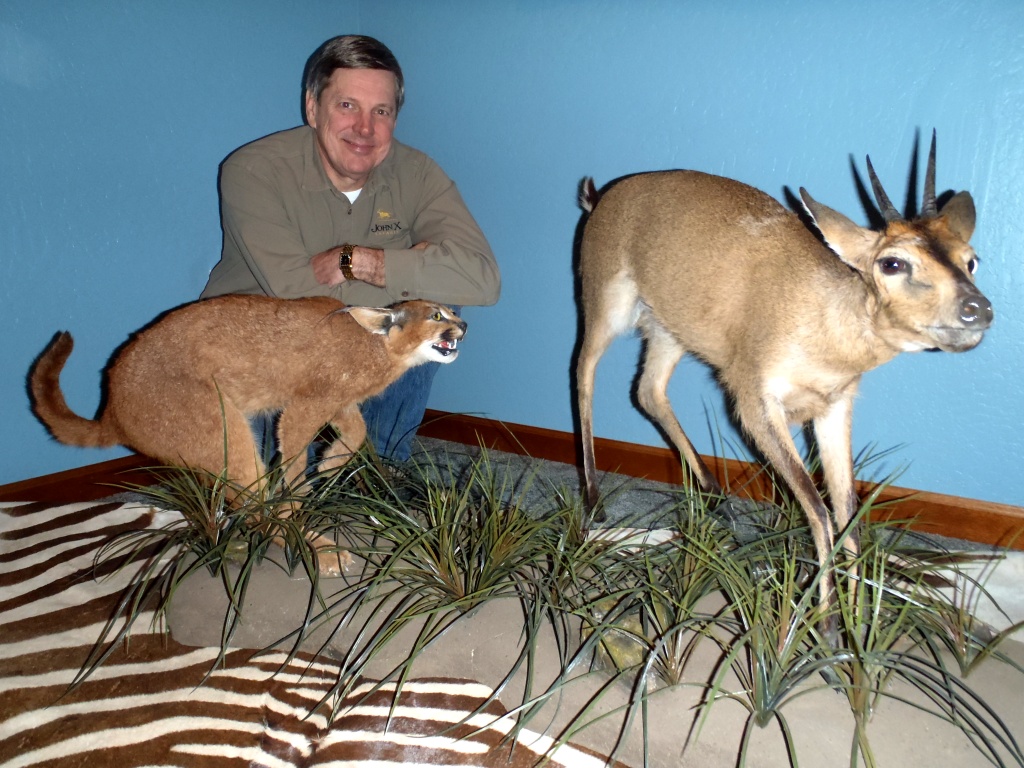