The Party Safari was BACK in a big way……

It has been said that a safari camp without tradition is like a night without the stars, and the day without the sun, neither can go without the other, much like a season without the Swedes. And so the tradition that was started three years ago must go on.
Every tradition has a script, a setting, story line, and characters, in order to carry any meaning for future generations. Fittingly the Party Safari covers all these basis and then some.
The characters are bold, interesting and extremely daring. The leaders of the pack are none other than our good friends, Bertil Friman, and Professional Hunter, Carl van Zyl. Then you have your seasoned regulars in the form of Benny Fredricksson and Thomas Nyden, guided by the daring Juan MacDonald. You’ll also find those characters about to break through the ranks into the regulars and for that they’d require a seasoned guide, hence the match up of Bjorn Hagman with Professional Hunter, Greg Hayes. Then like most traditions you need new comers or fondly known as green horns to keep the tradition going, for that we had PH, Rusty Coetzer, guide our head green horn, Martin Osthulm. The final character basis were covered by the green horns, Uno Kristiansson and Ingelile, who weren’t quite sure if they were going to join in the tradition of hunting or merely run with the party, the unknown – never a bad thing for a good plot!
The setting at John X Safaris coastal and northern areas was splendid and the story line superb. All that was required was a good script, and for that we had eight days to live out the creation.
Day one started out with a bang! Guns were checked, zeroed and rechecked – the hunt was on. 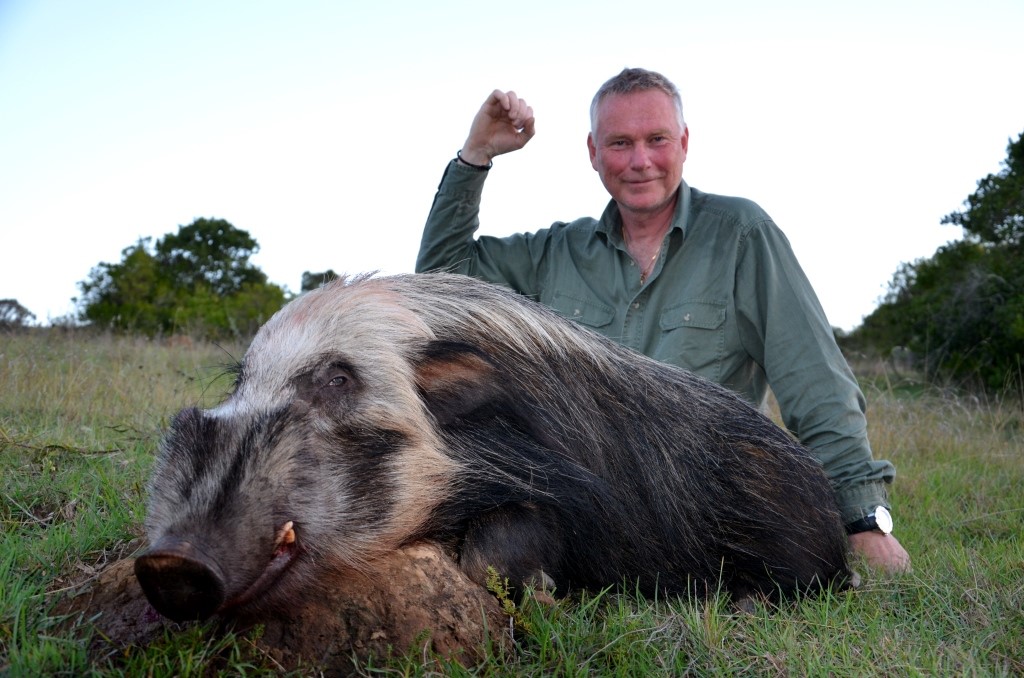 A Bushpig – yes a Bushpig! Bjorn didn’t know what it was, neither did he want to hunt one. He soon realized there would be no convincing of his PH, Greg Hayes. When you see a big Bushpig boar in day light – you take it! 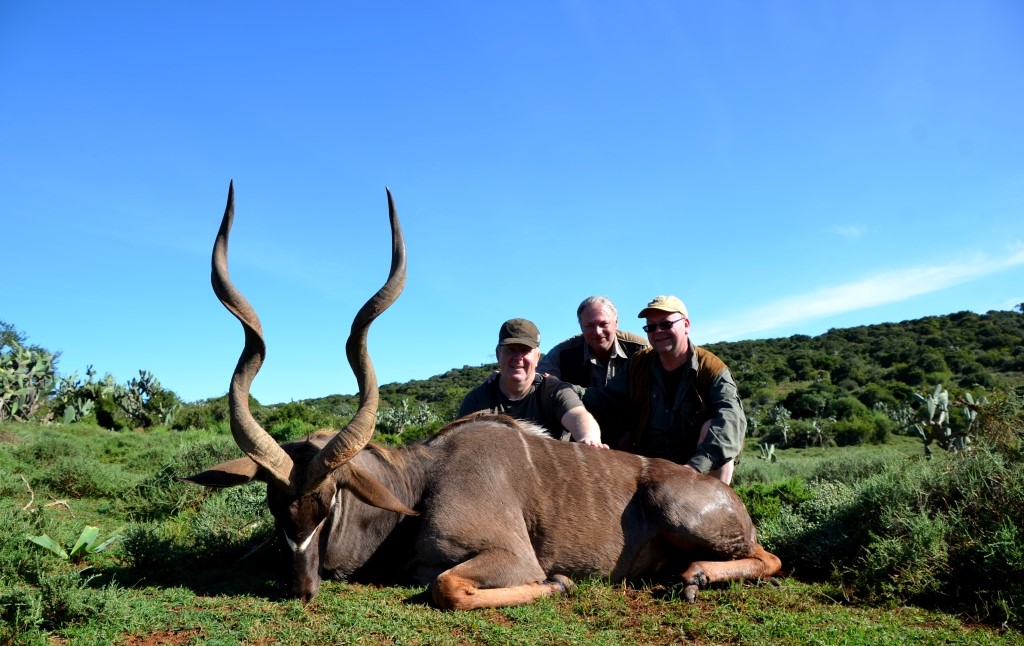 Uno started off day one not entirely sure if he would be joining the show. Its amazing what majestic a Kudu bull can do to even the most seasoned hunters – let alone a first timer! 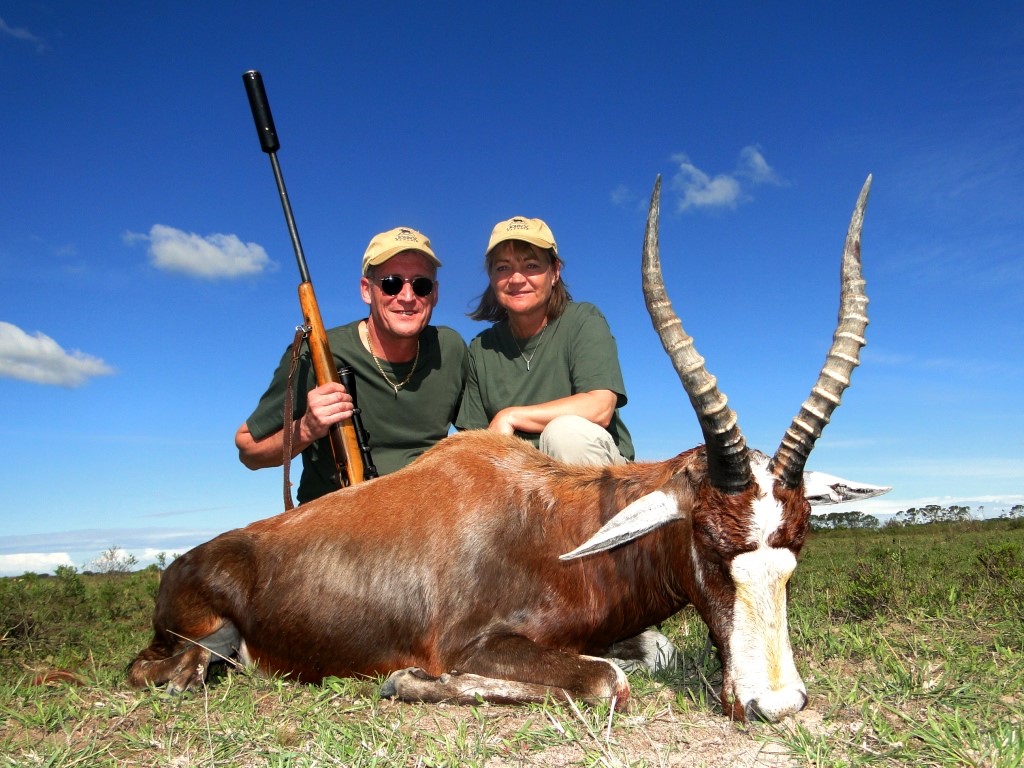 Thomas on the other hand setoff to show Ingelille the ropes. 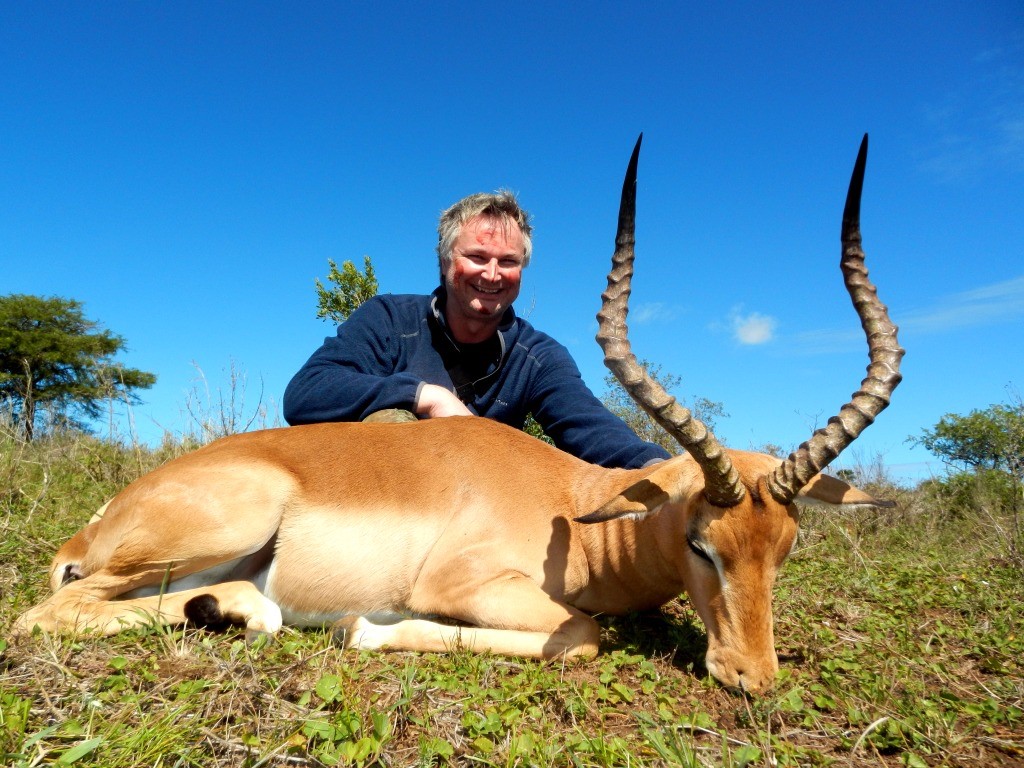 While our green horn, Martin got the full experience of his first African trophy – a great Impala and an even better blooding. 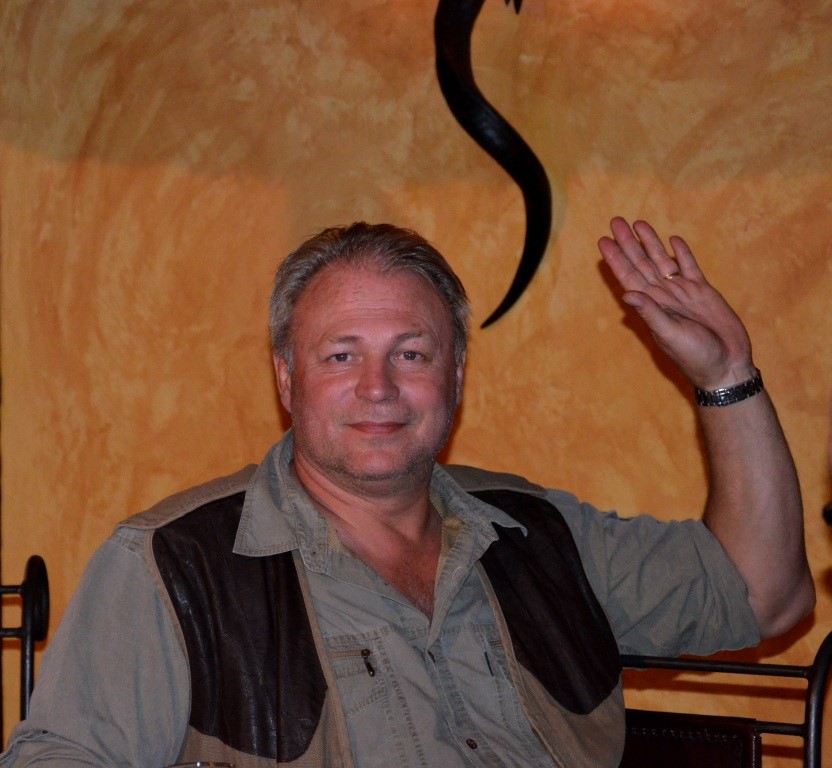 Others weren’t as lucky out in the field, but still managed to raise their game at the bar! What would day two hold?

Day two saw a slow start to the day. There were rumours of excellent service at the bar the previous evening, but to this day we’re not convinced it wasn’t something in the water. Who knows? Either way we finally only got going after ten….. 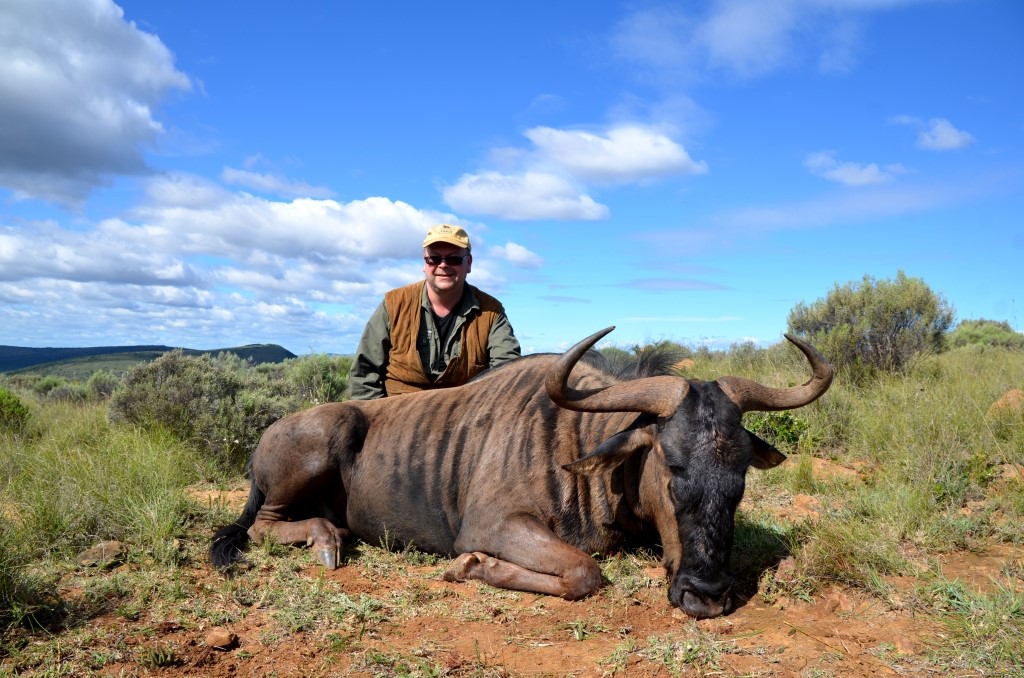 This time it was “Benny Bushbuck” who decided to add to the story line, with a great shot on a Blue Wildebeest while we were supposed to be hunting a Warthog. Very similar Benny – we can see the resemblance mate!

For the rest of the crews it turned out to be a quiet day and an early night that evening. Day three would see us head three hours north into the Great Karoo on the hunt for a variety of desert dwellers. 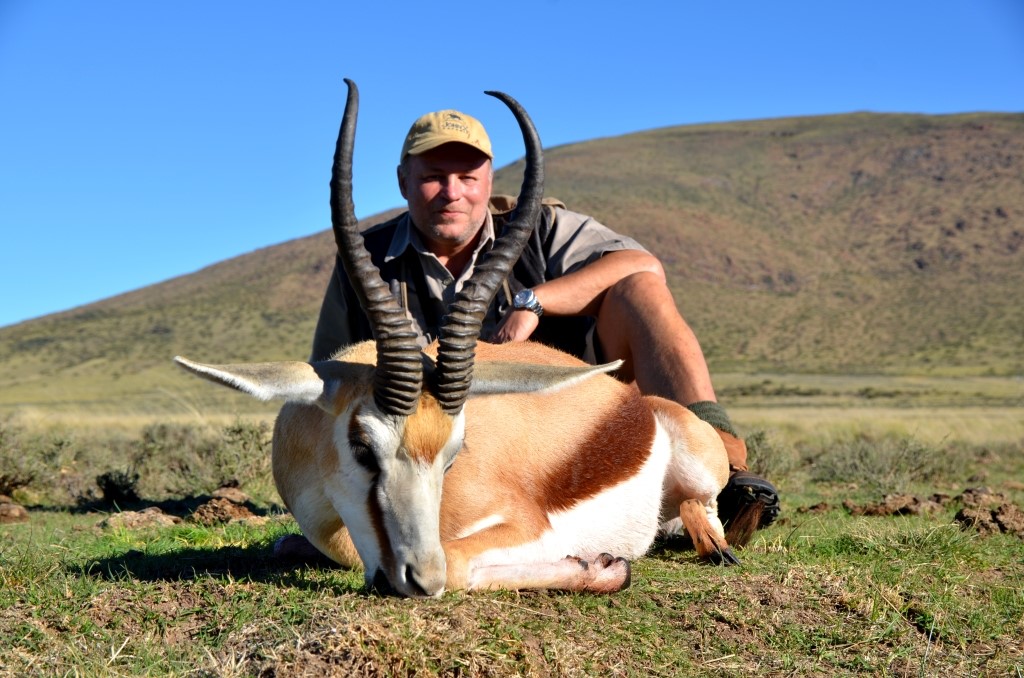 Bertil, who up to this stage had been waiting quietly in the wings, was the first to take advantage of the superb Karoo conditions with a massive Kalahari Springbuck. 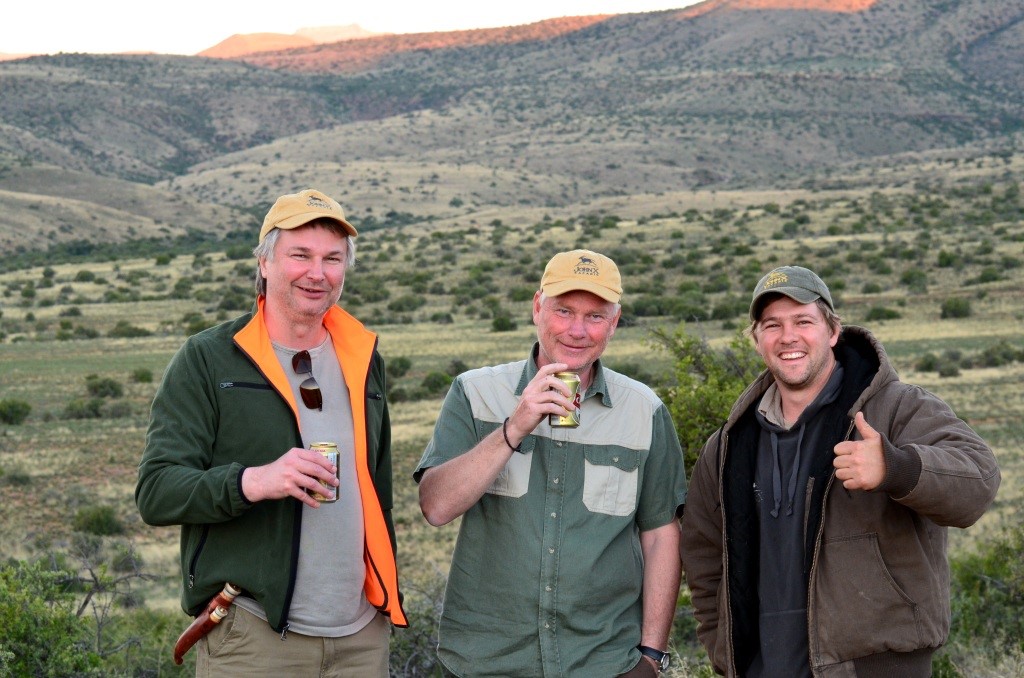 With the rest of the crew spending the remainder of the travel day relaxing and sight seeing up in the mountains.

Day four was to be a big day by all accounts. The hunters were well rested and the PH’s, Trackers, and dogs were raring to go. 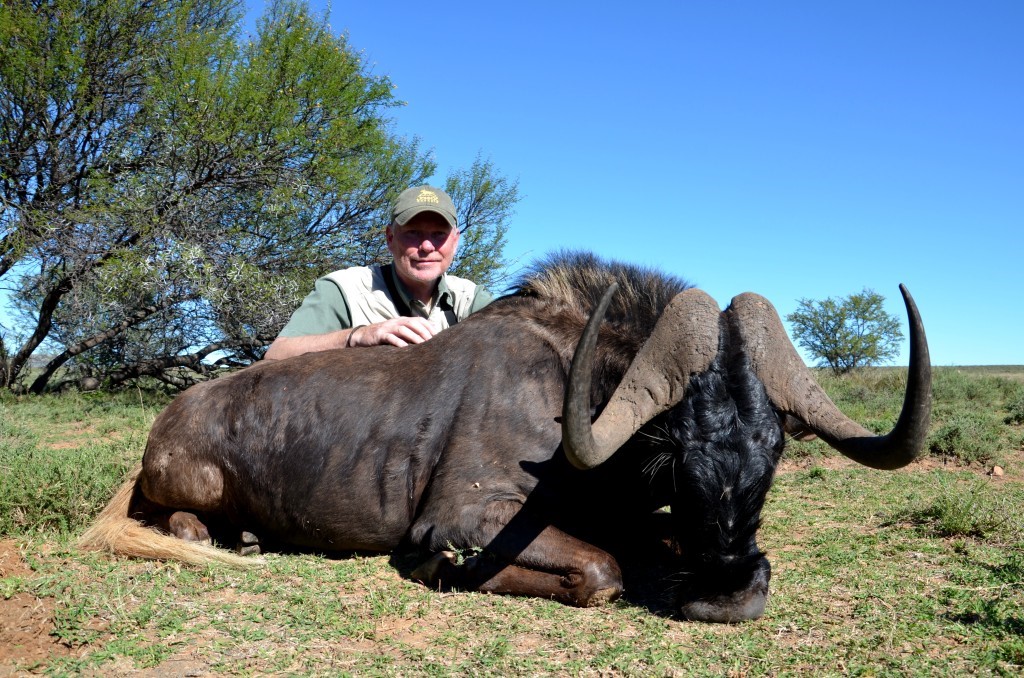 Bjorn was the first to strike it lucky with a great Black Wildebeest. 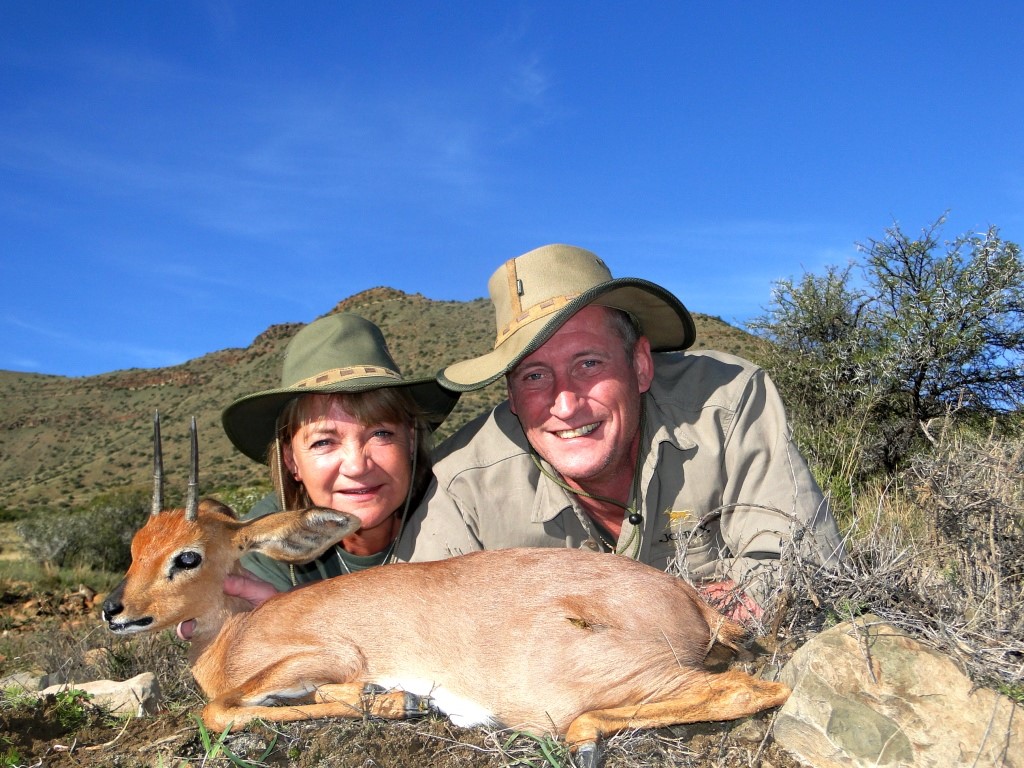 Thomas was next with his Steenbuck… 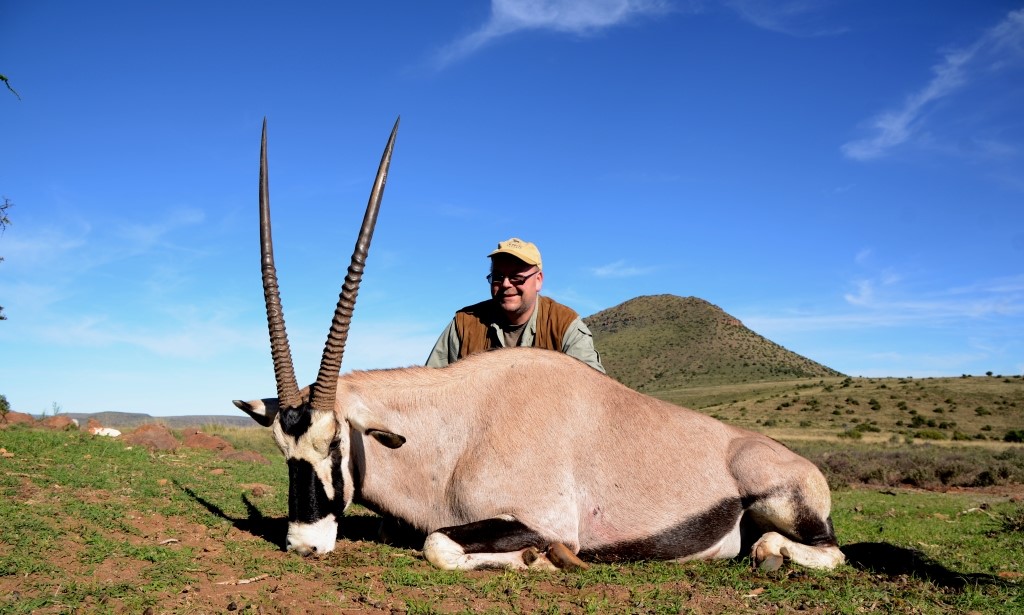 Before Benny got his Gemsbuck. 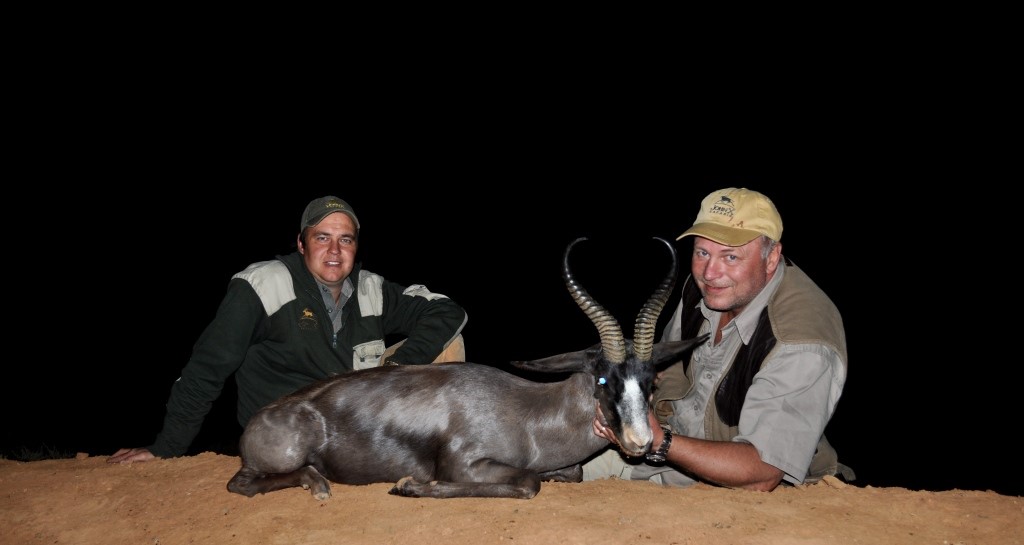 A memorable Black Springbuck hunt brought a fitting close to our day – a great day to say the least!

Day five would be our last day in the north, and the last opportunity for our hunters to collect some the Karoo species. 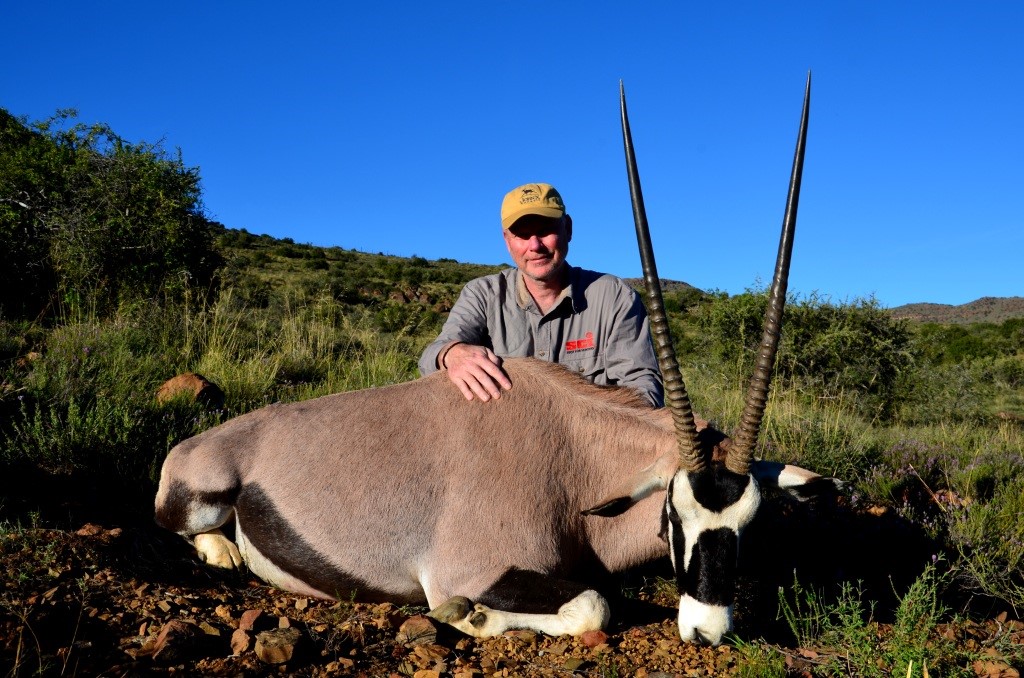 For Bjorn this day turned out to be the day he would hunt his long-awaited Gemsbuck…. 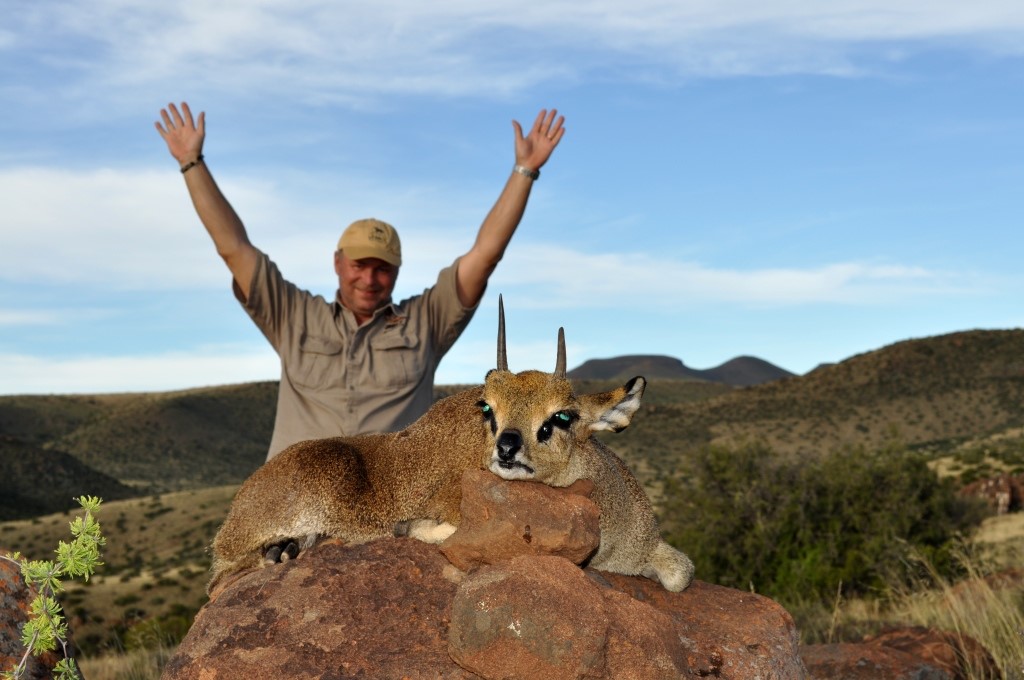 And Bertil his unique Klipspringer. Having spent a number of days pursuing these fleet-footed rock dwellers, and spending a considerable amount of time discussing Bertil’s Klipspringer, Bertil decided this ram was to be his very own “unique unicorn” Klipspringer. 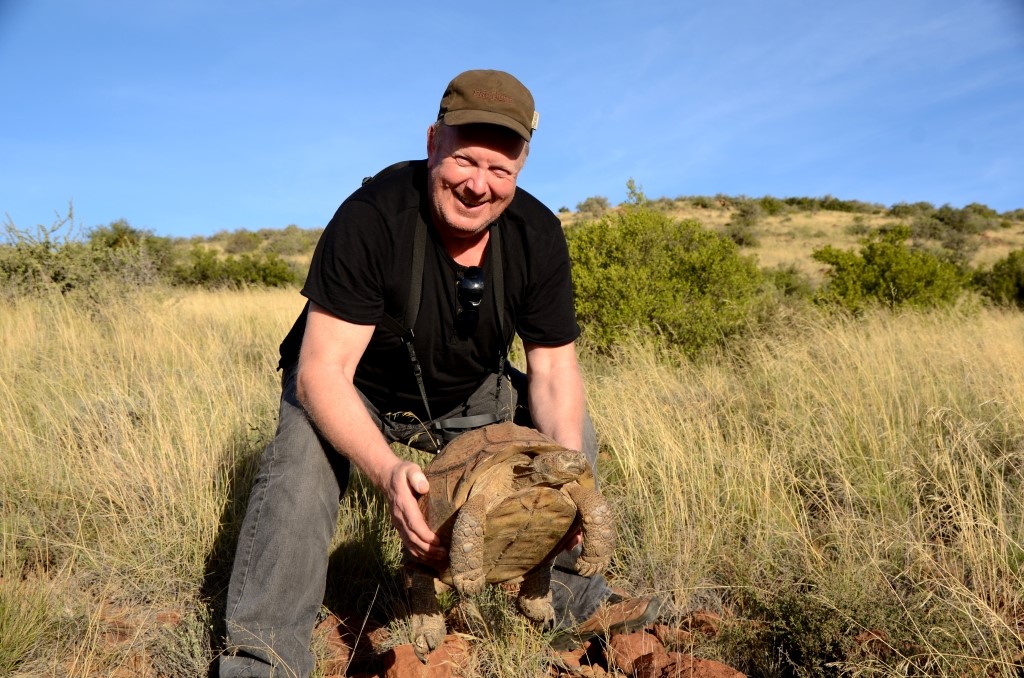 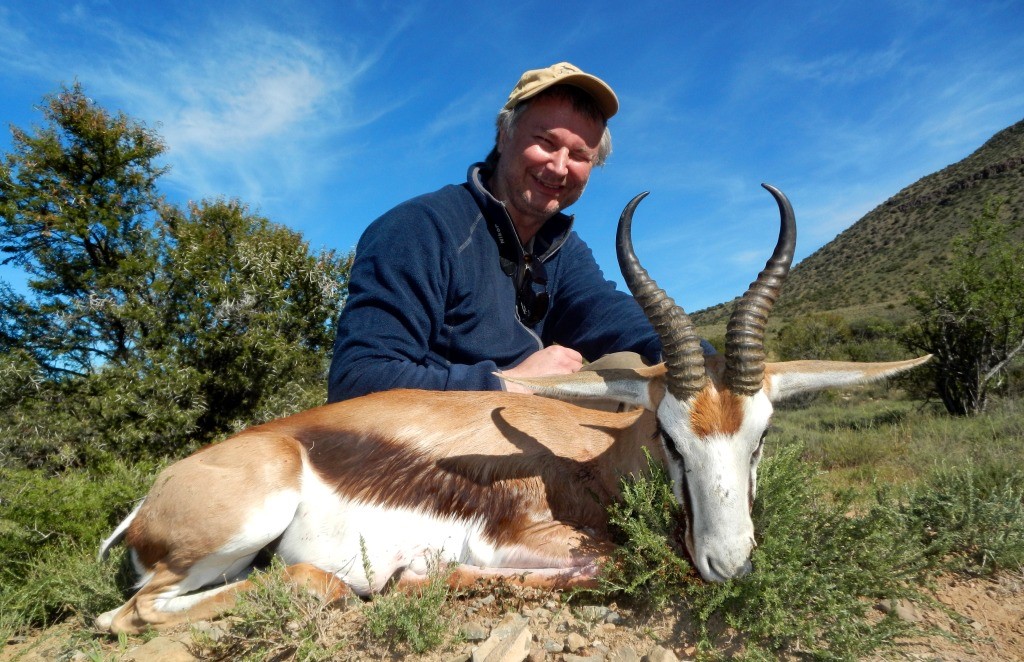 While Martin brought our stay in the Karoo to a close with a fitting ending – hunting our national animal, a great Karoo Springbuck!

Day six saw us heading south with hunting taking place on route to the coast. Without planning it, it turned out to be the day of the Warthog…. 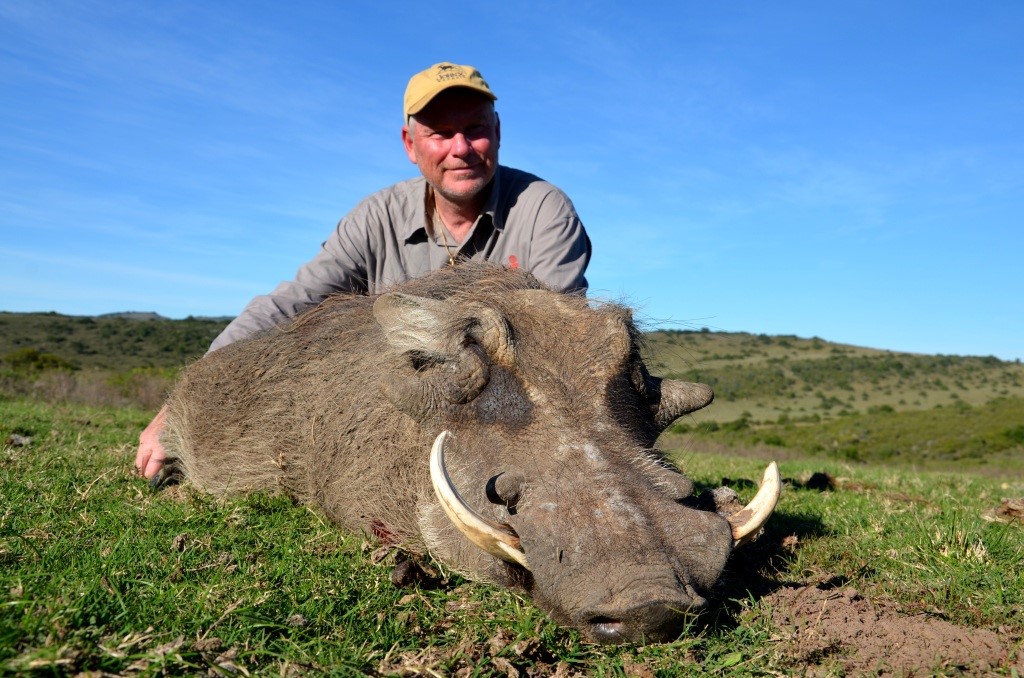 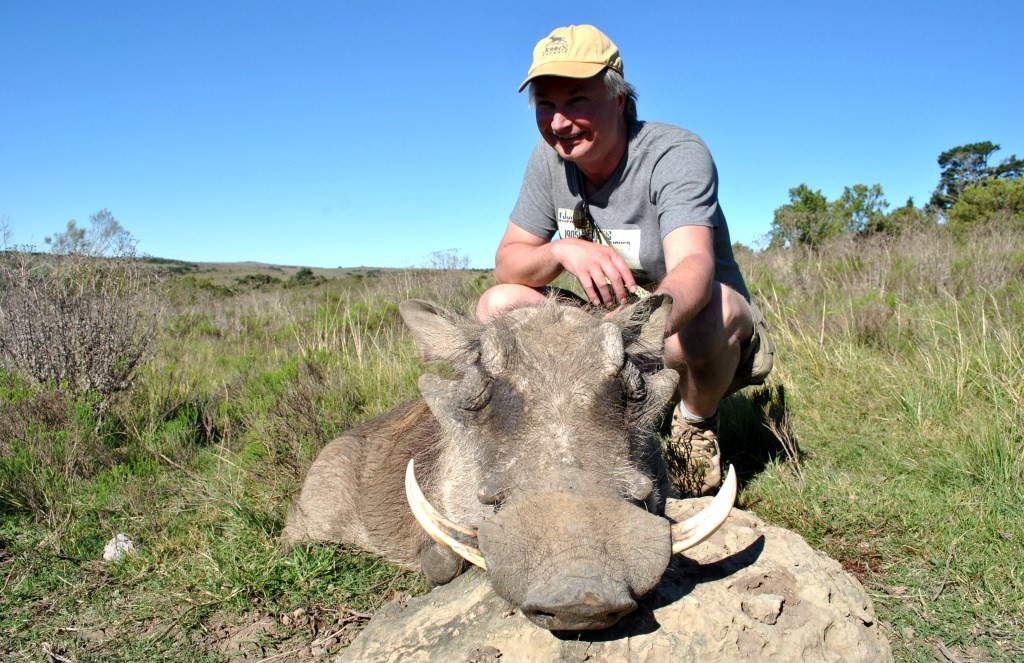 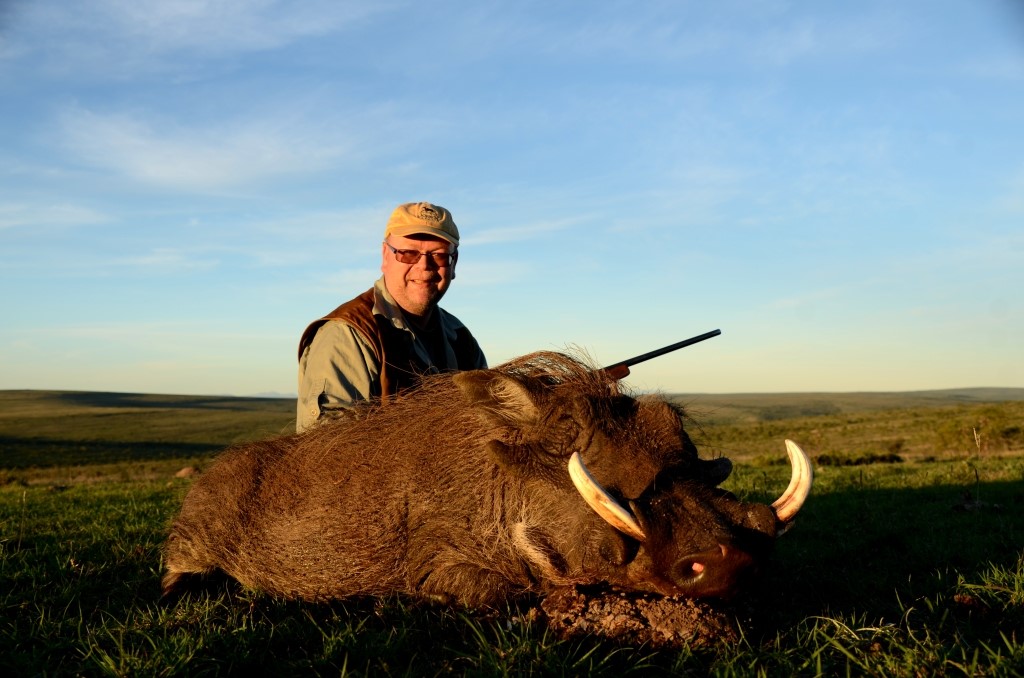 And Benny with Warthog # 3.

Day seven would be our final hunting day, traditionally the day where the PH’s sit back and watch the hunters guide one another. It has become one of our favourite days in the calendar, as the laughter never stops from the morning to the night! 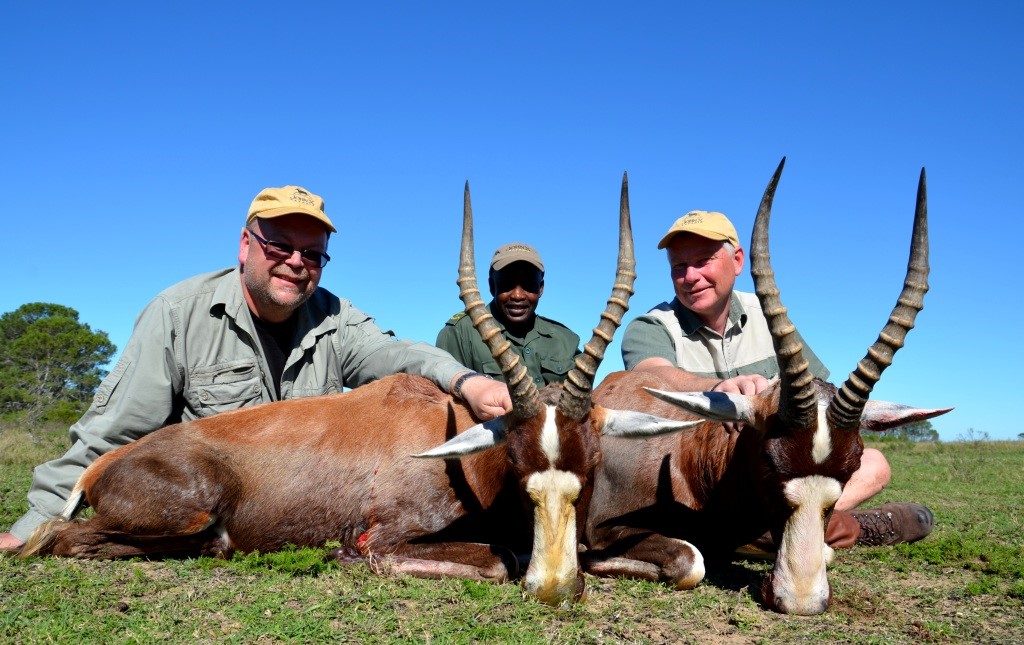 Benny and Bjorn were the lucky pairing this year, and WOW, did they do well! We sat back and watched the entire hunt from 800 yards off. Two great stalks topped off with two superb shots – fantastic guiding boys!

Now up until this stage Ingelile had been weary of the hunting, but with time running out she took the plunge and amazed all…. 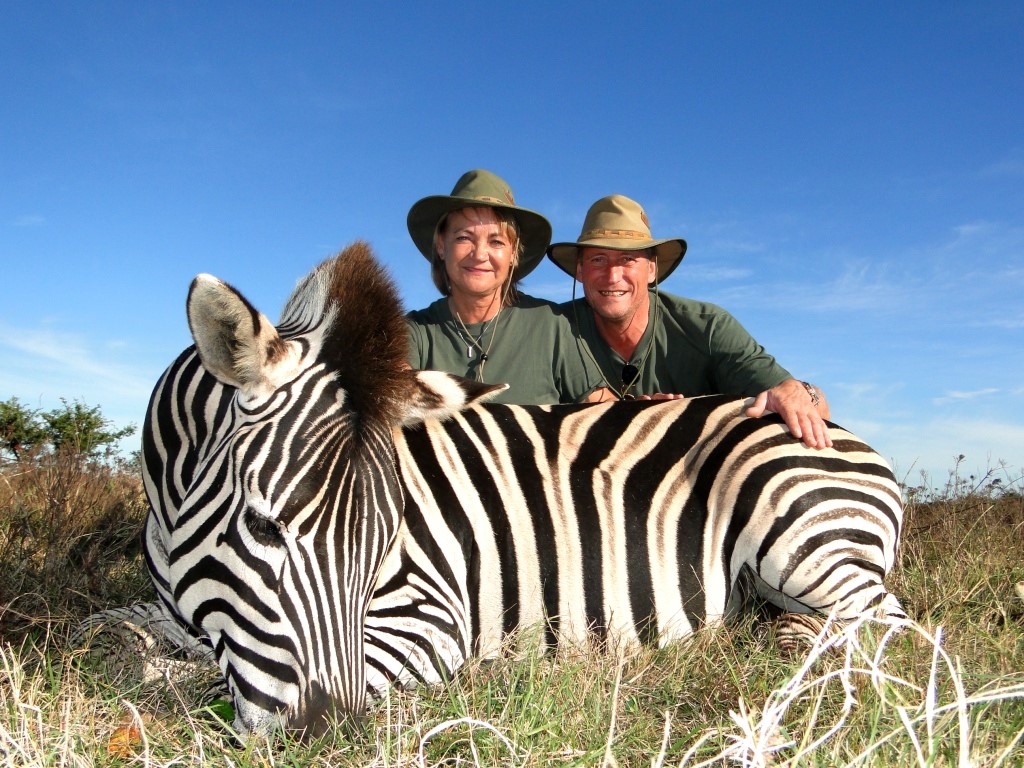 Her first African hunt, and a Zebra to top it off! 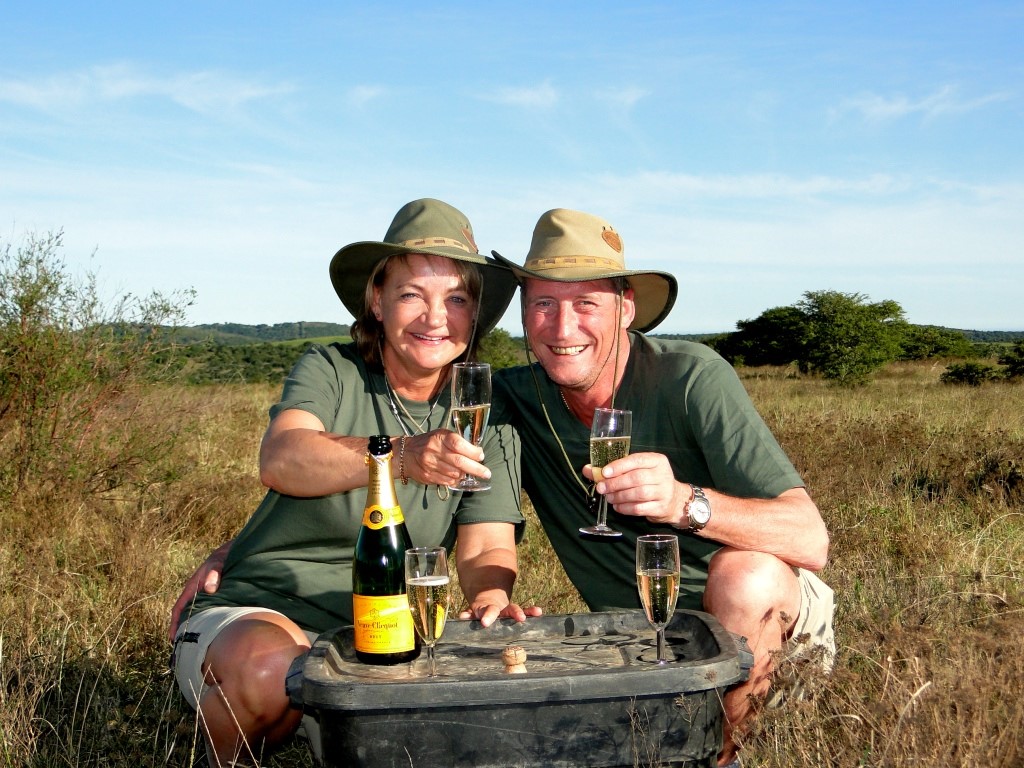 It was reason for a celebration – the hunt had been a success and the party was about to start!

The last day of our hunt has become somewhat of a tradition, not to say that the entire hunt has not become a tradition, but it’s for good reason why they call this particular hunt the “Party Safari”. We headed down to the coast that last day for fun in the sun and a spectacular lunch with Rick and Sue.

After an enjoyable day on the coast we headed back to camp for our last evening, and more importantly the traditional fines meeting. This meeting is the culmination of our safari, the camaraderie, and the highs and lows. It’s the last time we all sit together around the same table for at least a year – and more importantly the last time we get to laugh with and at one another. 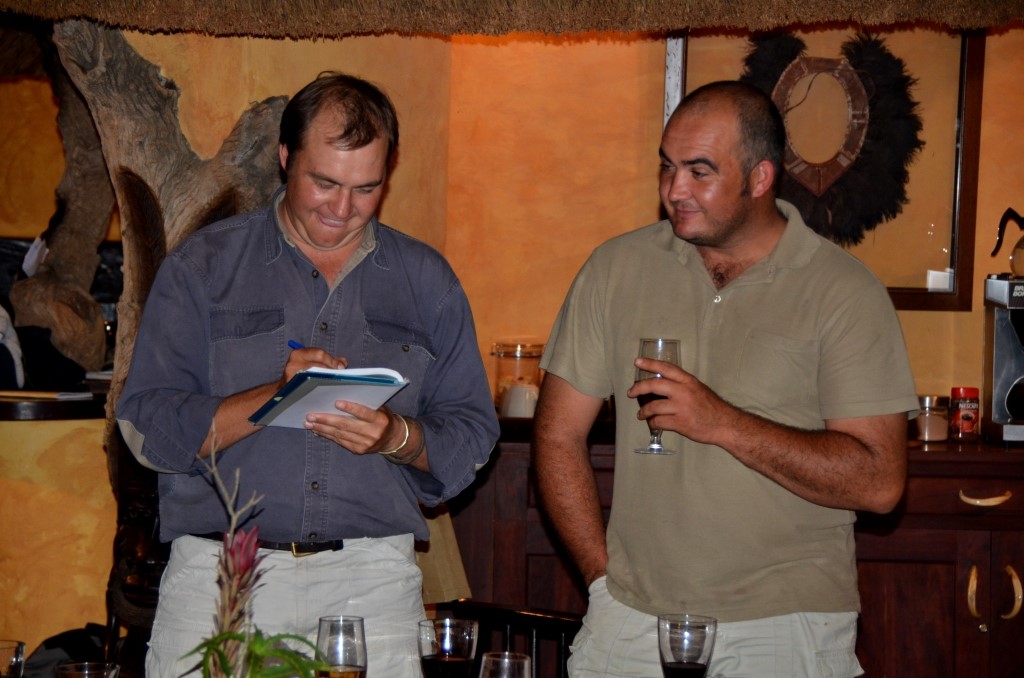 As with any good fines meeting, you need a fines’ master and his right hand man… 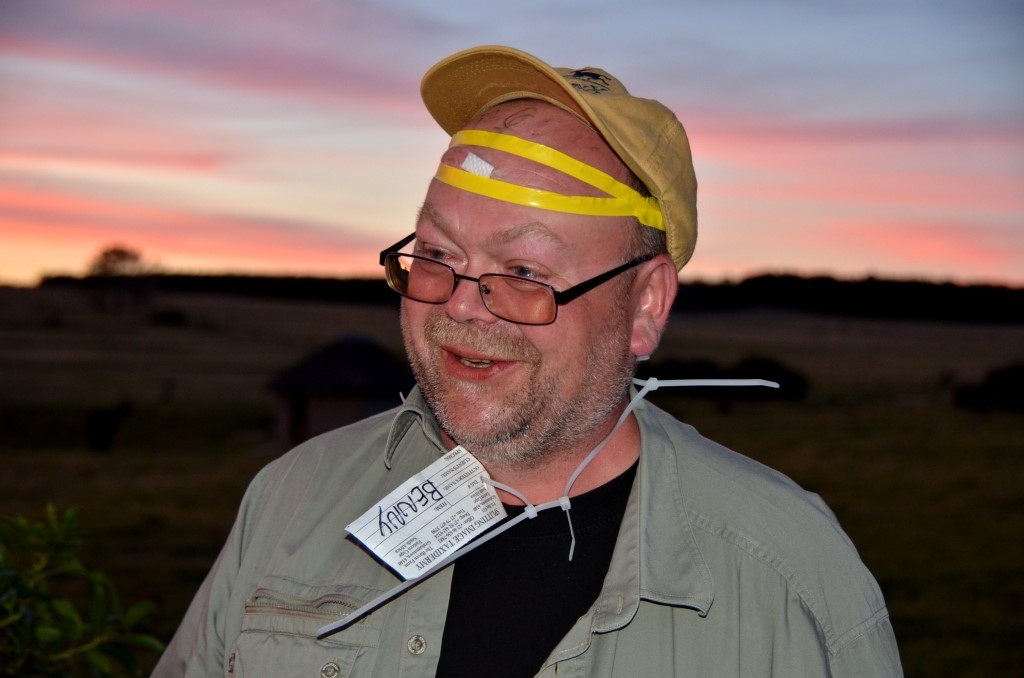 A couple of worthy culprits who deserve a fine for any reason what so ever….

And the boys who’ll make you laugh until the sun comes up!

Until next year boys – Keep up the fun and may the tradition continue for many years to come…….
For more information and current updates about John X Safaris; follow us on Twitter, connect with us on Facebook and visit our Website!