A John X Safaris experience for over 100?
Contributed by Cindi McNair, proud new member of the She Safari Sisterhood
I have not hunted game my entire life.  So I was certainly not a lifelong hunter who dreamed of going on safari as the ultimate adventure.  My husband Mike and I were introduced to “safaris” through our good friends Chris and Martie Petersen.  Mike and Chris met in a goose blind many years ago, and they have been hunting together ever since.  While sharing drinks by the fire in their trophy room, the Petersen’s have spent many a night retelling the tales of their African adventures with John X Safaris.
The sessions in the Petersen’s safari room always seemed to end the same way:  “You guys should go on safari … why don’t you join us!”  While the trophies and tales of their safaris created visions of Africa, my husband always responded the same way:  “Africa is just too far … I can’t stand a plane ride that long.”  And this was a hunter talking … one who quite literally grew up hunting as a kid. 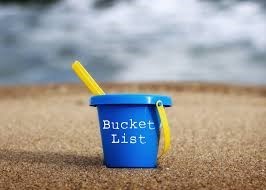 What my husband Mike did not know is what I have on my “Bucket List”.  On that list of lifetime achievements, one of my top things to do was:  “Ride an elephant in the wild”.  After four years of “drinking about safaris” with the Petersen’s, they began to get the upper hand.  When Chris mentioned that John X Safaris customize their safaris to visitors individual needs … and can even book elephant rides … I was hooked!  Let’s just say, when wives set their sights on Africa, they have ways of convincing their husbands that no flight could be too long, especially when there are elephants to ride on the other end.
So plans were made for the Petersen’s and McNair’s to go on that mystical adventure called a “safari” in the US summer of 2013.  And I have to admit, a major part of the fun was all the planning and preparation.  Of course my husband had to practice shooting from “sticks” and plan which trophies to hunt.  They even convinced me to participate in shooting practice.  I have done some target shooting, so it was fun to learn how to shoot a rifle.  Although, I was not convinced I would actually hunt in Africa.
“Wilson” goes to Africa …
Professionally, I am the Director of a large senior living community, where 150 independent, educated seniors live.  Once the story got out that I was going on safari, all the residents wanted to “participate”.  They were insistent that I brought back plenty of photos so we could re-enact a fun Safari Night together, and they could experience our safari through pictures.
I’m not exactly sure how I came up with the idea, but as I began to picture our Safari Night, I didn’t want it to be just a bunch of pictures running as slides.  I wanted a story to tell, with some fun and from a different perspective.  So, by sure coincidence I found a little bendable figure symbolizing “Joy”.  He was it … he would be my African safari and photo buddy. 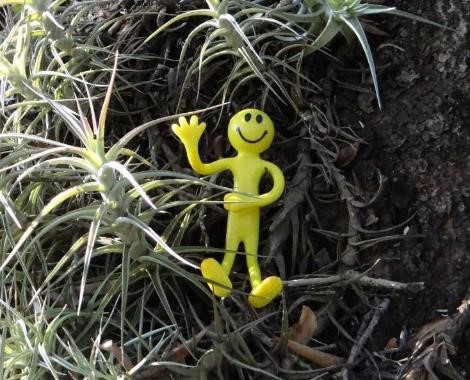 Meet “Wilson” … My safari and photography buddy in Africa.

And he had to have a name…remember Tom Hanks in the movie “Castaway”?  The washed up Volleyball he named Wilson?  That was it, my little yellow guy would be named Wilson.  My plan would be to take photos of Wilson while on safari so that I could share the stories with my senior residents back home. 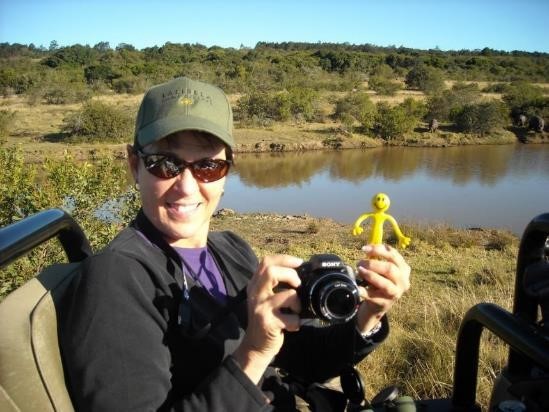 Wilson went everywhere with us on safari …

When John X Safaris says that they personalize their safaris to your needs and desires, you have no idea of what that means until you get there!  I thought I was going on safari to ride an elephant.  Indeed, I can successfully cross that off my bucket list!  What an amazing experience to not only ride the elephants, but feed them up close and personal by hand! 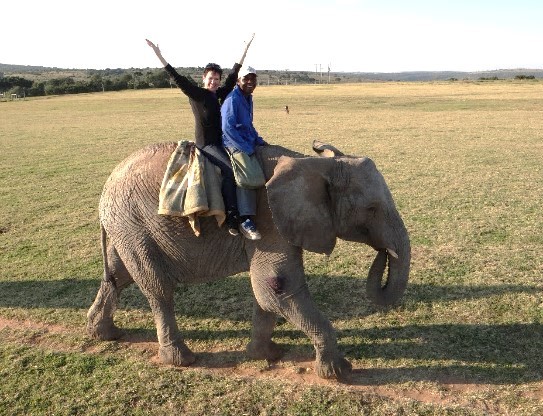 Wilson was with me every step of the way as I crossed off my Bucket List … Riding an elephant in the wild of Africa. Look! He’s in my left pocket! 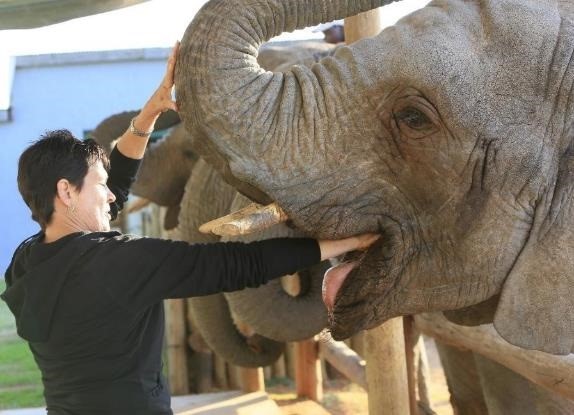 My Bucket List never envisioned being able to literally put food in an elephant’s mouth. Amazing! 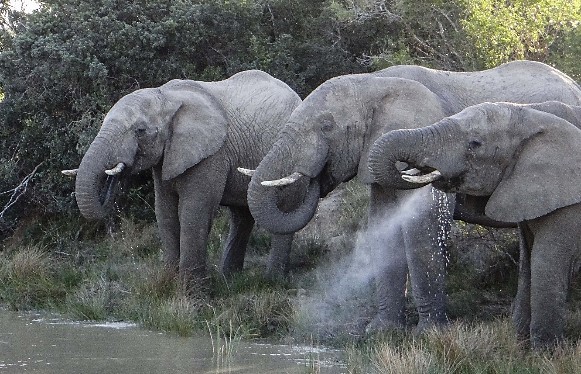 One of Wilson’s Big 5 game drive highlights … Elephants at a watering hole at sundown.

One does not immediately think of oceans when going to South Africa.  It turns out that John X Safaris base camp is situated in the coastal region of the East Cape.  With our close proximity to the ocean, we made various excursions, including a couple of visits to the warm Indian Ocean.  In addition, Wilson and I even had a chance to dip our toes in the Indian Ocean!  Who would have guessed?  On Safari! 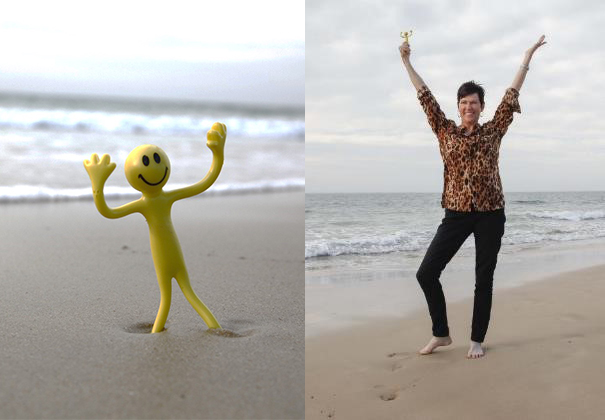 Another Bucket List achievement for Wilson … walking in the Indian Ocean surf!

Wilson truly went everywhere with us, including a special safari evening dinner held at the “boma”, which is an enclosure literally in the middle of the African bush.  Nothing can quite describe the experience of dining on South African cuisine under starlit skies around crackling campfires.  This was certainly a night never to forget.  Both Wilson and my husband, Mike, had more fun than should be allowed dancing around the fire. 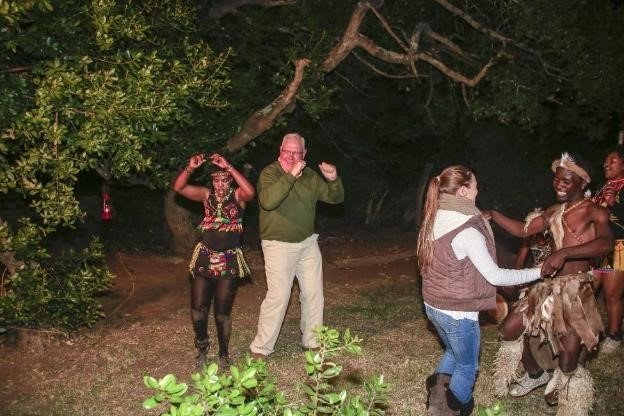 Wilson and husband Mike, Rock it at the boma!

“The thrill of the hunt” are words I never thought would apply to me.  But my time with John X Safaris proved me wrong!  I can’t begin to describe how exciting it was to hunt my first big game animal.  I proudly took my impala on my first shot … “Animal Down”!  And, suddenly I realized all of the emotion and joy of big game hunting in Africa.  And once again Wilson was there at my side as I became a proud “She Safari” member of the Hunting Sisterhood. 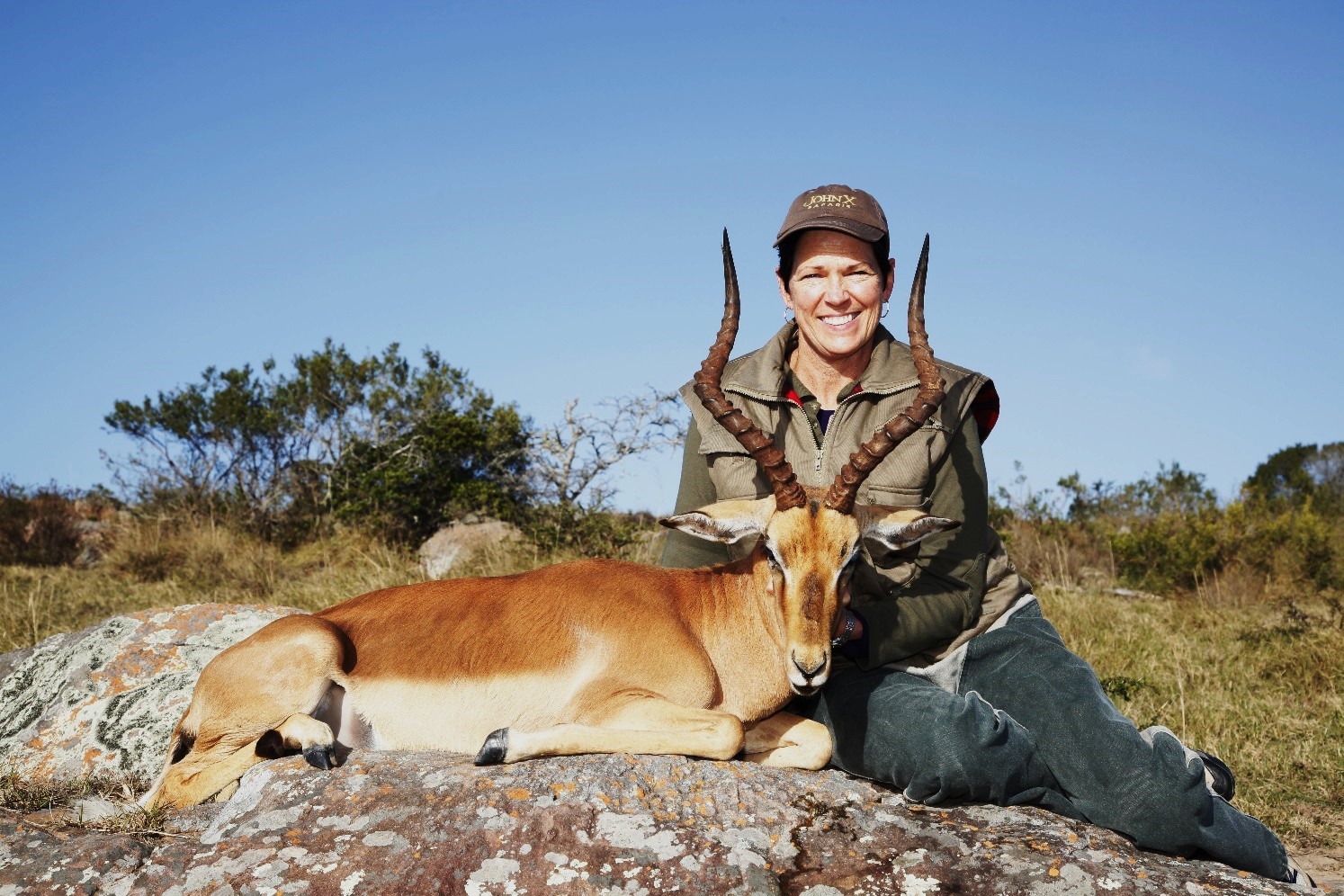 Wilson was in my pocket when I became a member of the Safari Sisterhood. My impala … my first trophy.

On my Facebook page I posted “Wilson goes to Africa” several days before our adventure.  It started as a fun way of documenting our journey and provided terrific photo opps to tell our story on safari.  Everyone at John X Safaris came to know Wilson, and Wilson became the ultimate fan of “sundowners”.  Our trusty ranger, Kelly, seemed to always have our favorite drink and snacks in hand as Wilson and friends watched the sun set on the African plains. 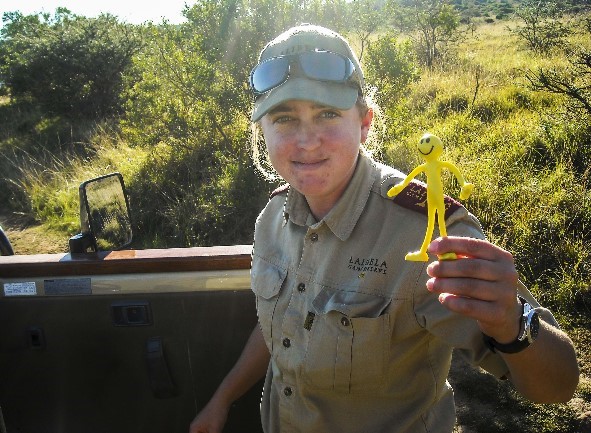 Wilson and Kelly gearing up for Safari Sundowner patrol!

Wilson’s journey to Africa ended up providing untold laughter, and a way of bringing a great story back home.   In fact Wilson went back to Iowa and was the Star of his own Safari Night Adventure where we shared our stories with all the seniors at our retirement community … literally a hundred plus residents “went on safari” with John X that night and had the time of their lives with Wilson.
Africa is an incredible place which is hard to describe.  The beauty of the “bush”, the variety of animals and birds create an amazing experience in the wild.  I came to ride my elephant, and experience many lifetime memories.  I also hunted my first trophy which was an incredible experience in itself!  And Wilson was there for every minute of it.
Ladies out there, if you know someone going on safari, don’t stay home.  Lead the way!  The entire John X Safaris team went out-of-the-way every day to ensure that we all had a fantastic experience that exceeded any of our expectations.  Whether it is hiking the coast, riding an elephant, watching the Big 5, or hunting your own trophy … going on safari is an amazing experience that should be on everyone’s bucket list. 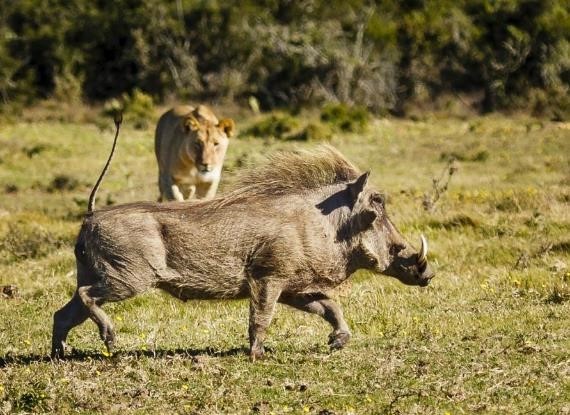 A special shout out to my PH, Carl van Zyl, who was more than our guide … he and his family became our friends.  Ranger, Kelly, is simply the “best” who will show you Africa like no other.  Thanks to friends old and new who made our first safari to South Africa a trip of a lifetime.   And finally, I thank my husband Mike, he was my true champ!  He gave me my elephant ride, and didn’t complain for one minute about the length of the flight home!
For more information and current updates about John X Safaris; follow us on Twitter, connect with us on Facebook and visit our Website!