A safari three years in the making 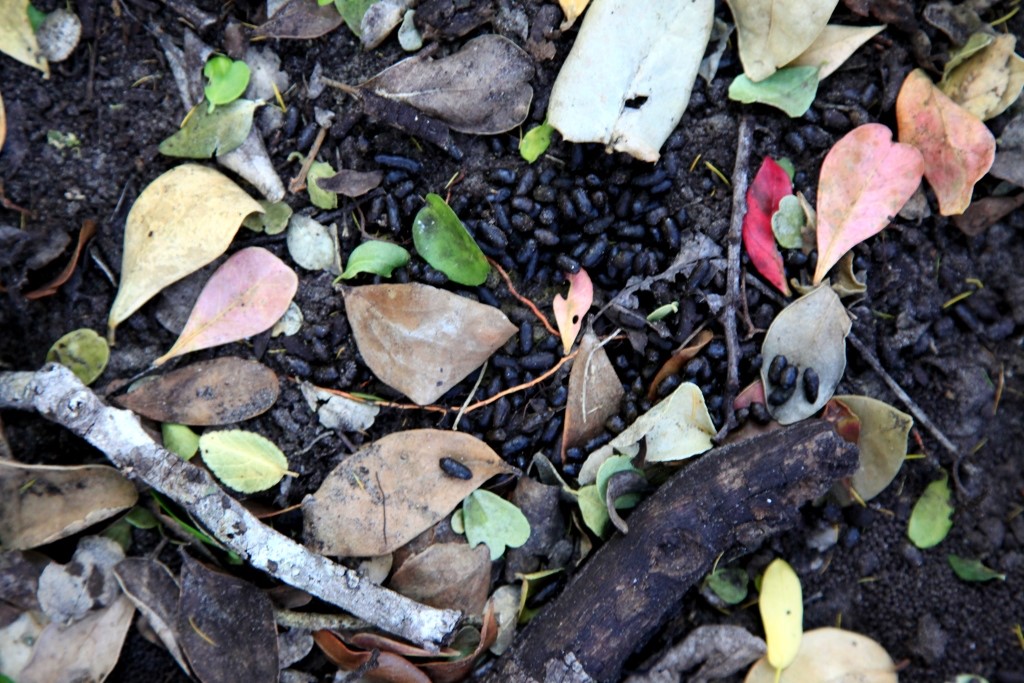 After finding a prime location, they then build a very small watering hole.  Duiker definitely come to drink.  But, the water and some surrounding feed are prime ways to attract Vervet Monkeys.  Why are monkeys important?  Duikers tend to feed primarily on forage that drops to the forest floor.  Since the monkeys are always dropping left overs from forest canopy above, Duikers tend to follow the Monkeys.

As it turned out on our 2013 safari, we had brought some very close friends.  We had been touring with them, and even went Waterfowl hunting.  We also wanted to be with them as they took their first African trophies.  So we were down to just a couple of days for the Duiker hunt.  To say that I was anxious would be an understatement.  There would no room for error … I only hoped that the setup was as good as my PH described.
The morning of the hunt could best be described as an early fall Whitetail hunt.  We got up well before dawn, and made our way carefully down the trails.  The major difference was you could hear the waves of the Indian Ocean rolling in on the shore in the distance.
I was given explicit instructions about not spreading any scent and keeping noise to an absolute minimum.  In the dark we finally arrived at the blind.  That’s right … a popup ground blind exactly like you would use for deer or turkey hunting!  As the first rays of light began to penetrate the thickets, it began to look exactly like a deer trail and setup … but in miniature … like 1/10 life size. 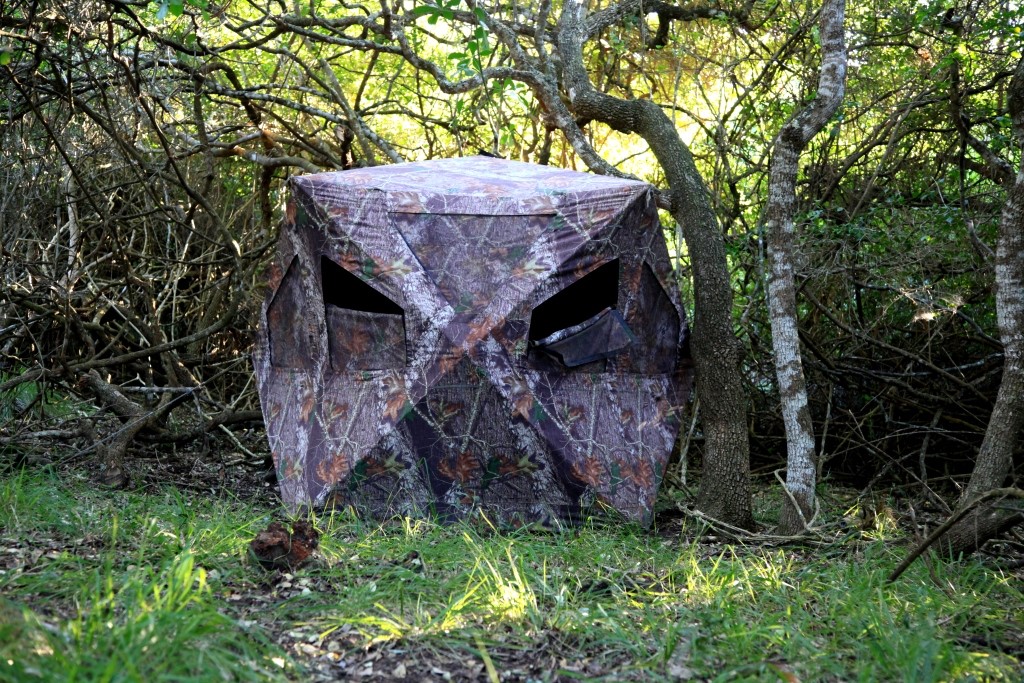 For any of you who have hunted in blinds, you know that the first light plays tricks on you.  You see things that are not there.  Then you catch of glimpse of movement or what you thought might be a Duiker.  I was told not to make a sound.  So I tapped Carl on the shoulder when I saw a Blue Duiker flash, proud that my old eyes could even make it out.  Carl gave the thumbs up, so the game was on.
As it turns out, my trusted PH was frustrated that I did not shoot.  But the Duiker had gone behind some heavy brush from my view point, and I did not feel comfortable taking the shot.  The Duiker then faded into the bush.  I was told later that at least two other Duikers came and went that I did not see, but they did not present a shot.
As often happens in blind hunting, things went dead.  Well that’s not entirely true.   Some amazing birds came to visit the waterhole as light filtered through the trees. We continued our wait, I was given strict orders to stay alert and keep the gun up on the sticks, because you never know when “it” will happen.
And then it happened.  There they were … the Monkeys!  Climbing and chattering all over the trees above the water hole.  Carl came to full alert as did Jose who was manning the video camera.
About two minutes later there they were … it was like a pair of Duiker just materialized out of thin air.  To say that they were jittery, twitchy little creatures would be an understatement.  They looked like two small, dark Chihuahua dogs in constant motion.
When one finally stopped broadside in front of the miniature watering hole, Carl gave the signal to shoot by tapping my leg.  Somehow out of the corner of my eye, I saw the other one literally jump over the standing trophy and land in front of it.  Somehow I managed not to squeeze the trigger until the intruder had cleared.  It turned out that it was the female of the pair who bounded in front.  She finally drifted off and left the “Monster Blue” standing in front of watering hole just 25 yards from the blind.
I was using a shotgun, as is typical with hunting Duiker due to all the brush.  When the shot went off, the roar was deafening and I think everyone jumped, especially me.  When the dust cleared, no Duiker!  How could anyone possible miss with a shotgun at 25 yards?
To say that Carl was nervous would be an understatement!  He scrambled from the blind to see what had happened.  As it turned out, the momentum of the shot had carried the tiny Duiker into the miniature water hole so that he was out of sight from the ground blind.
Once Carl discovered the trophy, there were shouts and high fives all around. We had an amazing “Monster Blue” with horns measuring 1 7/8 inches, with great solid bases.  Forget all the measurements … it was truly a monster trophy because of the amazing experience. 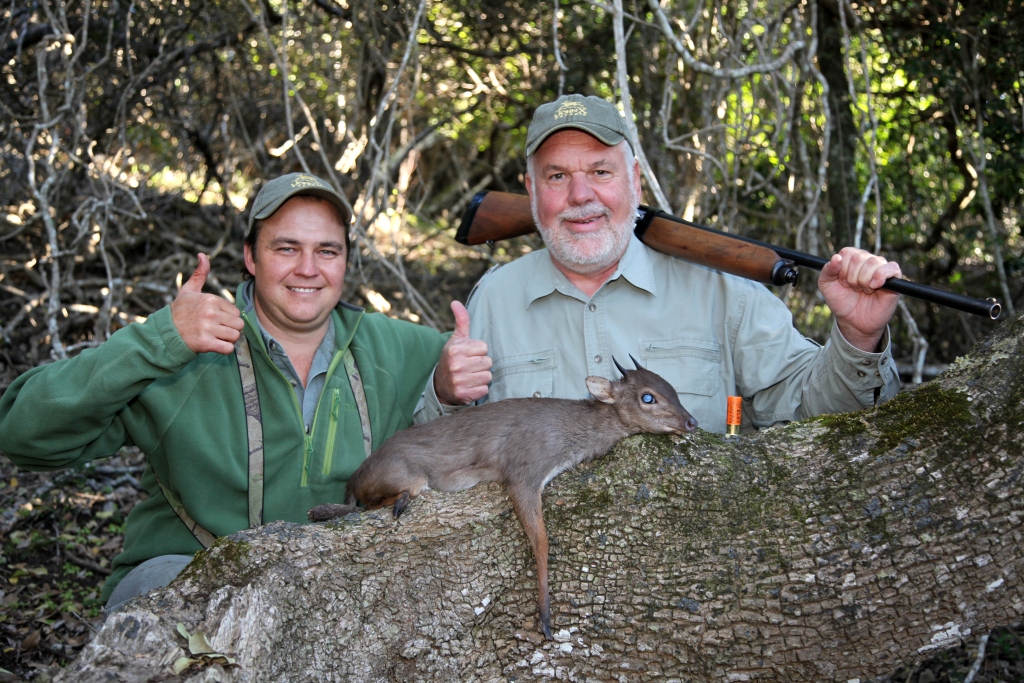 As you can see from the photo this creature is small.  That is a 12 gauge shotgun shell by the Duiker!  Blue Duikers are truly the tiniest of the Tiny Ten.  But what they lack in size, they make up for in character.  Simply an amazing animal that I had the privilege of observing in its native habitat for an entire morning. In fact, like I said, we were lucky enough to have Jose capture the entire hunt on film!
[youtube=http://youtu.be/JbHoKt8ydho]
I don’t know if it is possible to have a bad African safari.  I do know that the quality of the outfitter and your PH can make the experience absolutely incredible.  I simply cannot thank Carl and John X Safaris enough for working for over 3 years to find a way to hunt Blue Duikers from a blind.   Based on my experience, I know that you could actually take a trophy Blue Duiker with a bow from the blind setup I was in with John X Safaris.  You do not have to settle for a Duiker hunt with dogs and drivers.
As I sit and write this, I’m in my trophy room sitting under my Giraffe, across from my monster Eland.  I’m reliving my whole safari experience by sharing it with you.  The hardest part will be waiting until spring when the Monster Blue mount arrives from Splitting Image Taxidermy in Africa.
What will be the trophy room favorite?  As you can tell by this epic tale, the Monster Blue is at the top of the list.  But you know what, we now only have 30% of the Tiny Ten.
We might not be done just yet with the journey they simply call “safari”!  If you haven’t booked yours yet, what are you waiting for?
For more information and current updates about John X Safaris; follow us on Twitter, connect with us on Facebook and visit our Website!