The Proof Lies in the Pudding…. 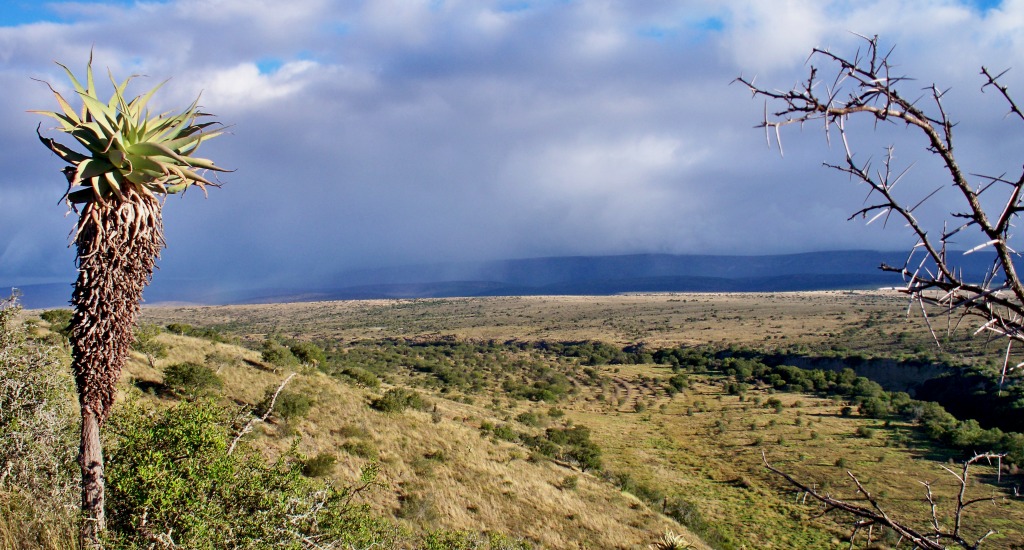 As we look back at the past month I have to remind myself that this is only the end of April. The first Kudu bulls have barely started following the cows, and the early mornings are slowly but surely requiring longs – it seems it’s time to pack away the shorts until September. In saying this I find myself excited to report back on the month of April, not only to relay the news of the exciting hunts that were enjoyed by all, but also anticipating that which lies ahead. Who wouldn’t be excited about the start of the rut and the return of many old friends in May?
Glancing through the various hunters’ albums it is rewarding to see our management efforts coming together. An ambitious principal was formulated into a plan some ten years ago, one which would see a new vision on areas, game numbers, and quota management. I’m glad to report that the vision is starting to mature into something even greater than we ever imagined.
Like with all visions it takes a team of strong individuals to enforce an agreed ideal, for this I’d like to thank my team of professional hunters and trusty trackers. What these guys have achieved and keep achieving on a daily basis is nothing short of remarkable. The results speak for themselves on the quality of trophies hitting the salt, but the effort on educating our hunters on what we’re trying to achieve, and ensuring their buy in, is what they need to be commended on.
As you look over the results of the past month, you’ll understand what I’m referring to. The quality of trophies will be mind-blowing at times, while the reports from our hunters have left not only Trish and I, but our entire team, speechless.
Part 1 – Early April….
The Reunion Tour
Brett Nelson has been an integral part of John X Safaris’ success over the past fifteen years. This year he was back again for hunt # 9, he brought along his girlfriend, Gina, and some old buddies of ours from Maryland. It was a reunion…. 12 years in the making. 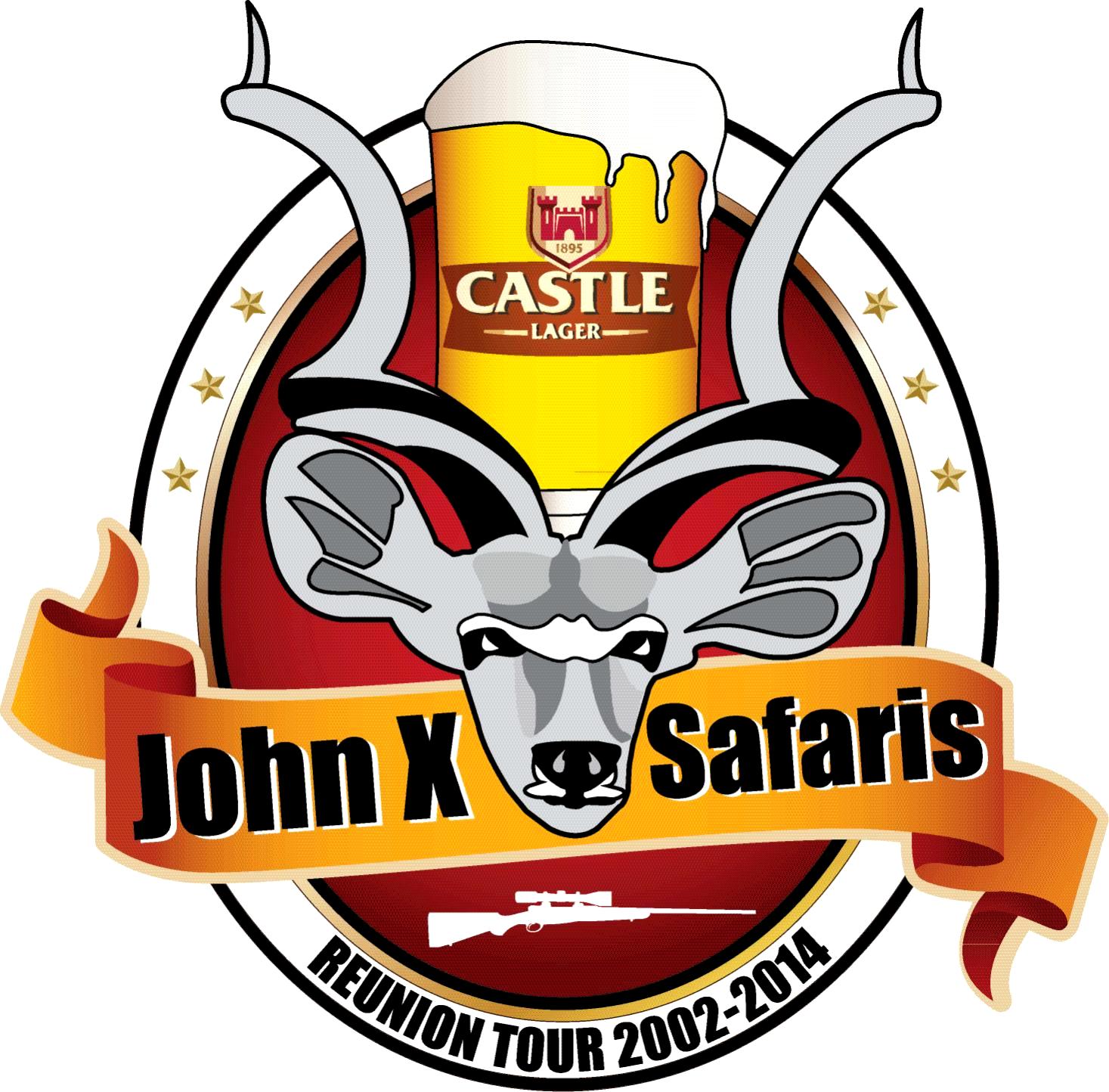 On this particular hunt, Brett stepped aside for the most part, giving Gina her first taste of Africa. She took in every moment, enjoying the fun along the way while being an extremely lucky hunter too. 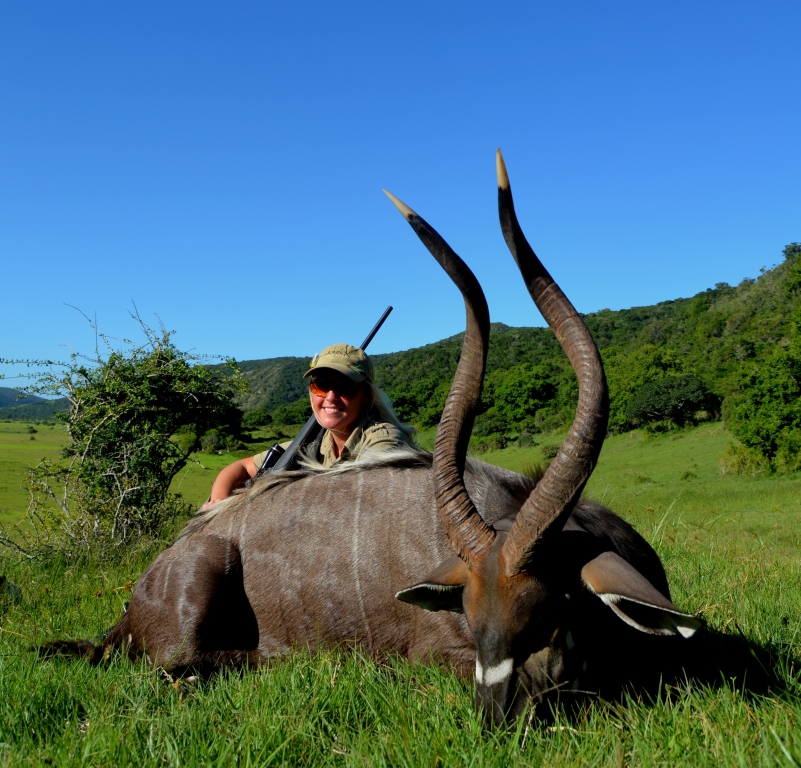 An Nyala was never part of the plan, let alone a monster, Gina needed no second invitation as she joined the sisterhood of hunters in Africa.

As for Brett, he always seems to squeeze out the big ones, but then again, he’s been here on nine separate occasions. 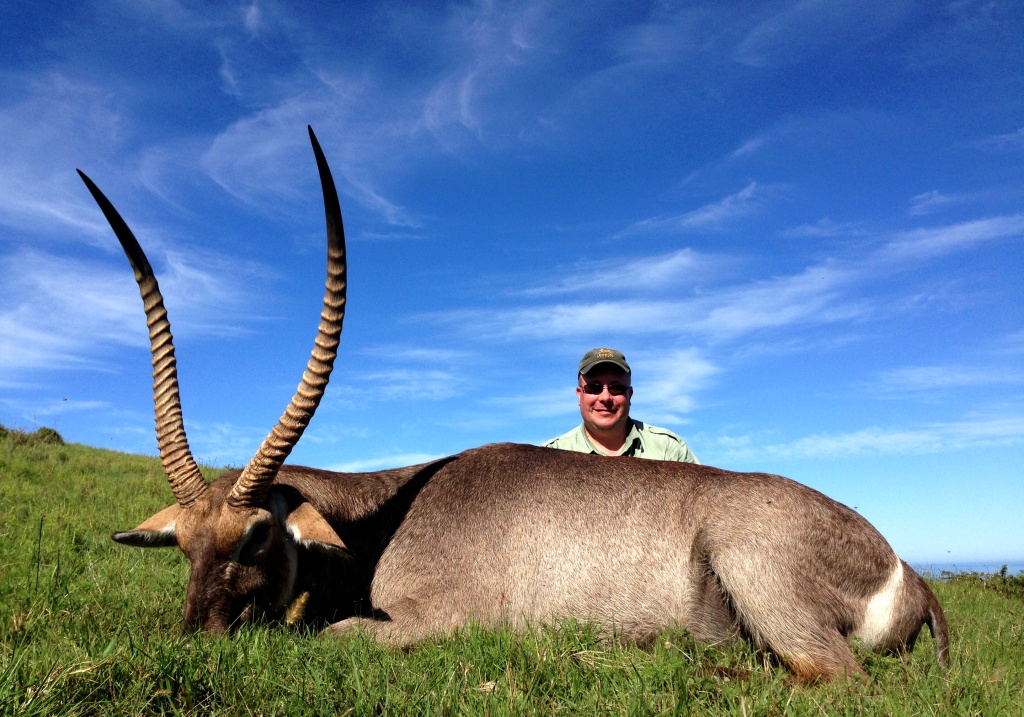 The harder he tries, the luckier he gets. Yes folks, your eyes aren’t fooling you, this will be one of the biggest Waterbuck taken in Africa during 2014.

An integral part of the reunion tour was the inclusion of Dwight Moser. This man is the heart and soul of the party and reason for the smile on my face while I write this. It’s not often that a hunter gains an infamous nickname such as “Klippies”. Those of you who are familiar with South African Brandy brands, will recognize the name Klipdrift, knowing this will most likely lead you to the explanation of his nickname. 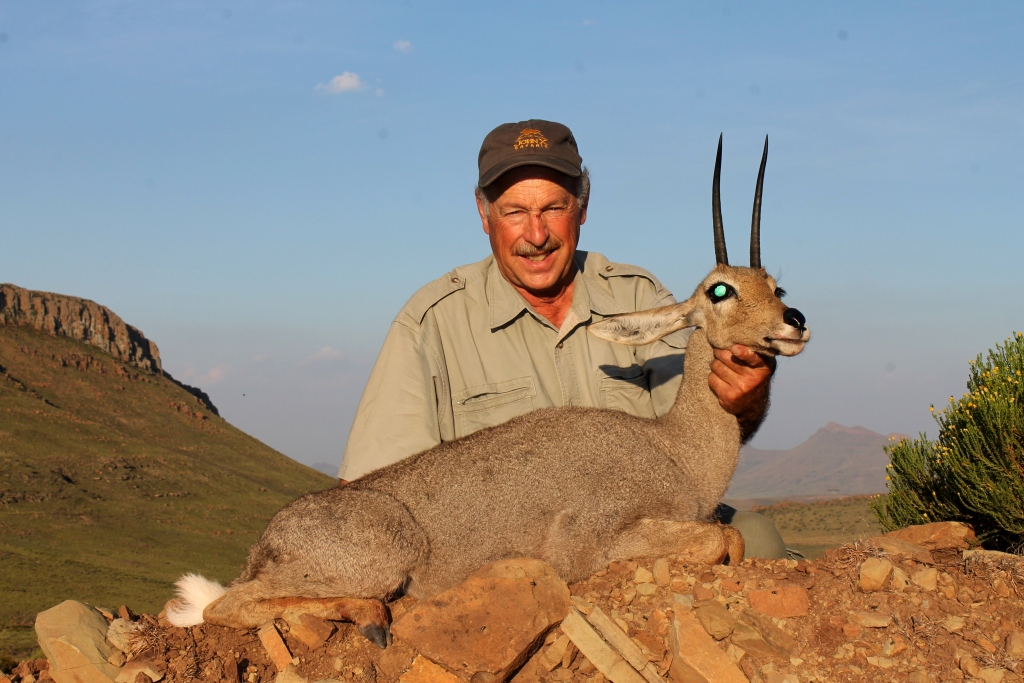 While Klippies knows how to enjoy himself, he sure knows how to shoot too. After a lengthy stalk on a Vaal Rhebuck on that first afternoon in the Karoo, Dwight pulled off a remarkable shot at 619 yards after clipping the ram at 300. A superb Vaal Rhebuck!

A number of trophies were hunted, including a great Blue Duiker, Nyala, Copper Springbuck, and Klipspringer to mention a few. A lucky break even saw Dwight and Professional Hunter, Mike Currie, bump into a group of Bushpigs late one afternoon – not something that happens everyday. 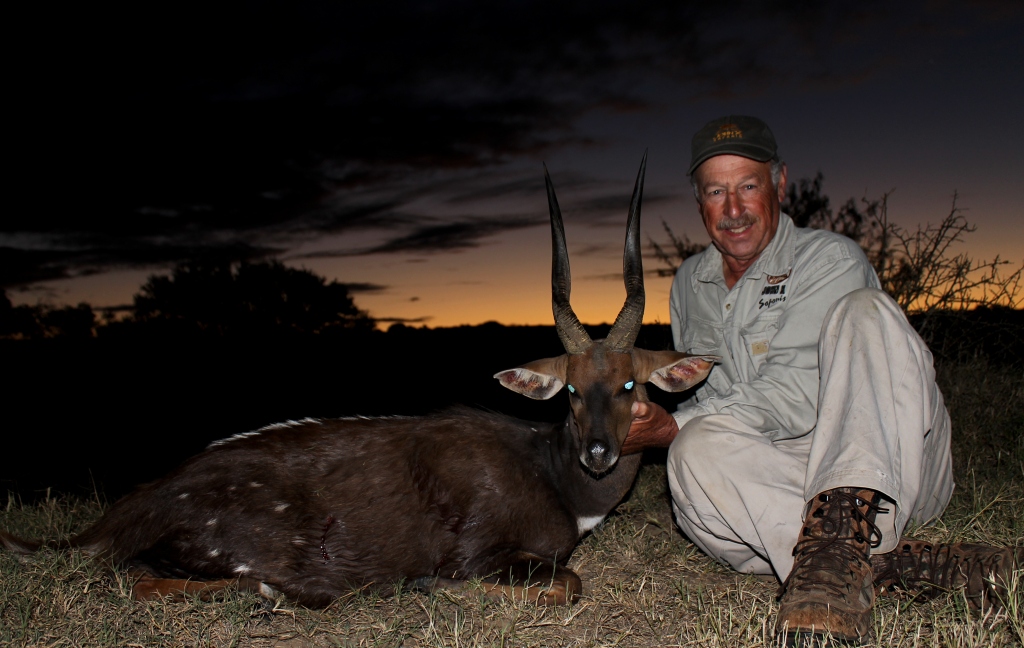 However his Cape Bushbuck turned out to be one of our favorites – a beauty to say the least!

For Professional Hunter, Greg Hayes, and Russell Pelan, it all became the hunt of the hog. It became an addiction….

With a boss hog in the shed, and knowing they had put the hammer down on the rest of the competition, they went about their business in a winning manner. Like most guys in a group, the competition is always rife, with no quarter given – nor expected. In the end they truly hit the home runs with a number of world-class trophies.

Dave Moser, back on his second hunt with John X Safaris, teamed up with Professional Hunter, Ross Hoolle, as they went after a number of species Dave had not hunted on his first safari. 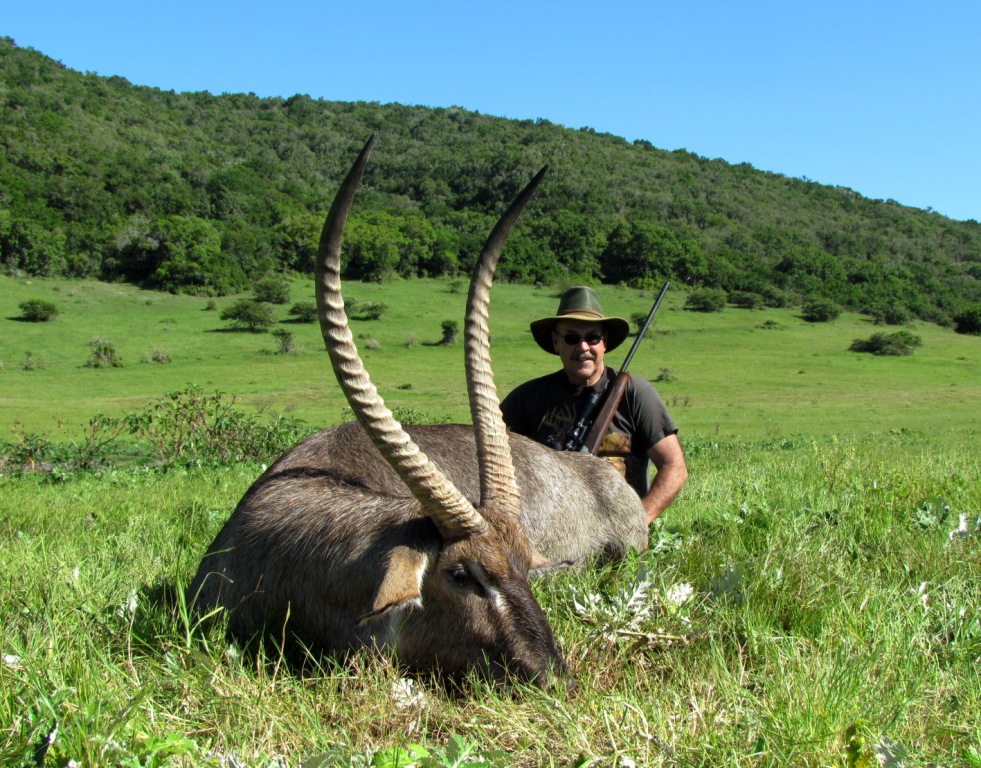 His Waterbuck taken a couple of days prior to Brett’s was a monster of a bull too, scoring just over 31”.

A great Nyala, Vaal Rhebuck, Lechwe, Copper Springbuck, and Bushbuck all found their way  into his daily diary, with my favorite being the stories he’d share around the bar each evening.
He would tell about the rest of the boys in New Zealand, Australia or Alaska, and of the crazy things they did. The funny things his brother, Dwight, would come up with, and about all the locals they met on their hunts around the world. It was hard not being envious listening to the many adventures these men had shared, but at the same time it was great being a part of all the new stories.
It had been one hell of a story getting them all back together for our reunion hunt, but man was it worth it. If it takes another ten years to get them back again, then so be it, it sure is worth the laugh every step of the way.
For more information and current updates about John X Safaris; follow us on Twitter, connect with us on Facebook and visit our Website.