A Waterbuck to be remembered….

Africa – The word alone brings a smile to my face. The entire experience was absolutely amazing! Not just the hunting, but the graciousness of the entire John X team. While I enjoyed a number of great hunts and an array of trophies, there’s always one in particular that comes to mind each time… In my mind he’s the most amazing animal I’d ever seen, and since our hunt I’m starting to realize there’s a couple more people whom seem to think so too…. A beast of a bull – That’s my Waterbuck.

Firstly, it takes a great team to achieve the unimaginable. I absolutely loved my P.H. Greg Hayes; he’s so knowledgeable, yet so willing and eager to share that knowledge. He had been hunting with my dad, Jim, previously so I had heard allot about him. I now had the privilege of hunting with him as well. Together with Greg was our tracker, Bless, a great man with a passion for the bush, and our Jack Russell terrier, Jock. Together with Dad and I, this was our A-team!

Greg had been watching this particular bull for two years, but had not been able to get onto it when he needed to. Then we had seen him earlier in the week as well, but I had not made up my mind if I wanted a Waterbuck, so we missed the opportunity.

Towards the end of the hunt I had made up my mind… I wanted to try for the Waterbuck bull we had seen. Heading out that morning I was actually quite nervous for a few reasons.

Firstly, the previous day I had missed an Impala twice before finally getting it. I had been shooting quite well up to that point, so there was no obvious reason why I had suddenly started missing. The second reason was one which was much closer to the heart… I was nervous, extremely nervous. I was fearful of disappointing my amazing Dad, and the rest of the team. After spotting the bull that first time, it didn’t take much to realize what a trophy and opportunity it was to be hunting him. And lastly, I have to admit it was a pride thing. Being a female hunter I wanted to show up the guys in the group. Gender aside, it would just be cool to pursue one of the biggest trophies of the season at John X Safaris.

It was actually an unusual morning. It started normal. Up early, breakfast, load up the truck, and off we were. Then Greg got a phone call from Carl asking if we could help out by giving his nephew a lift to school in Grahamstown. No one complained. It was actually kind of fun listening to a child that had grown up in the African bush – he knew so much about hunting. (p.s. Which by the way was much more than me!)? Before collecting Ross we had actually joked in the truck that doing these favors would bring us good karma… If only we knew how good it would turn out to be!

By the time we got to our hunting area it was about 10:00. Greg parked the truck and we headed out for a slow walk through the brush to a small clearing the bull had frequented before. I was told that old Waterbuck bulls were extremely territorial, so this was the logical place to start if we were to find him again. We had only walked for about 15 minutes when Greg spotted our bull in a clearing further up the ridge. We approached slowly, keeping a constant check on the wind. At 75 yards out he suddenly appeared. He stood there for a minute then turned. Greg quickly set up the shooting sticks and I set up the rifle. I was shooting my dad’s bigger 30-378, the perfect caliber for a big old weary Waterbuck. Dad’s rifle was fitted with a different scope to my gun; it had various crosshairs for different distances. As I looked through the scope and prepared to squeeze the trigger I suddenly realized I had the bull lined up in the wrong crosshairs. I quickly adjusted to the correct ones, tried to regather myself, while the bull just stood there, unaware of our position. I’m sure it was only seconds, but it felt like a lifetime before the shot rang out.

At the crack of the shot I quickly reloaded, and looked up with dread to see if I had hit him…… Both Greg and my dad had huge grins on their faces – “You got him!” Those words from Greg were like music to my ears!

The bull had taken the hit well, disappearing into the nearest undergrowth. We immediately released Jock to pick up on the blood trail, hoping he’d relocate the downed bull. It didn’t take long before Jock started barking franticly indicating he’d found the bull. He had run a mere 40 yards before piling up. Then real celebration began. 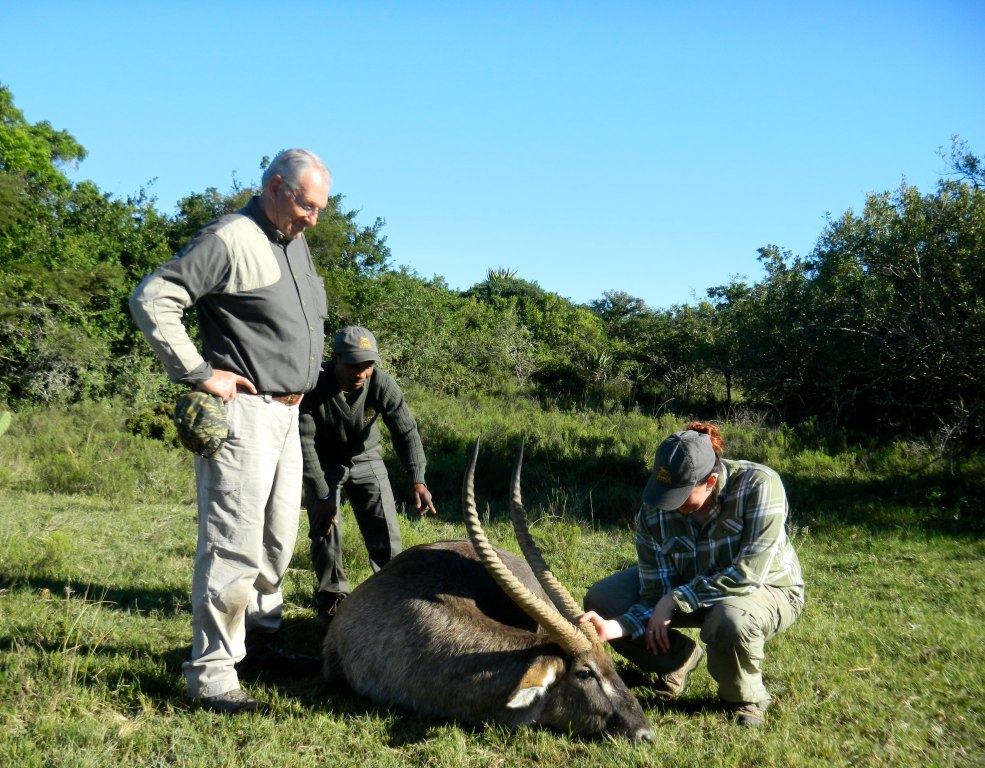 Dad and I admiring my bull with the rest of the team….

No mere handshakes, no, there was hugging all around. WAHOO!!!!!! After the hugs and the many pictures (more than most weddings), it was time to appreciate a bull like few others have ever seen. 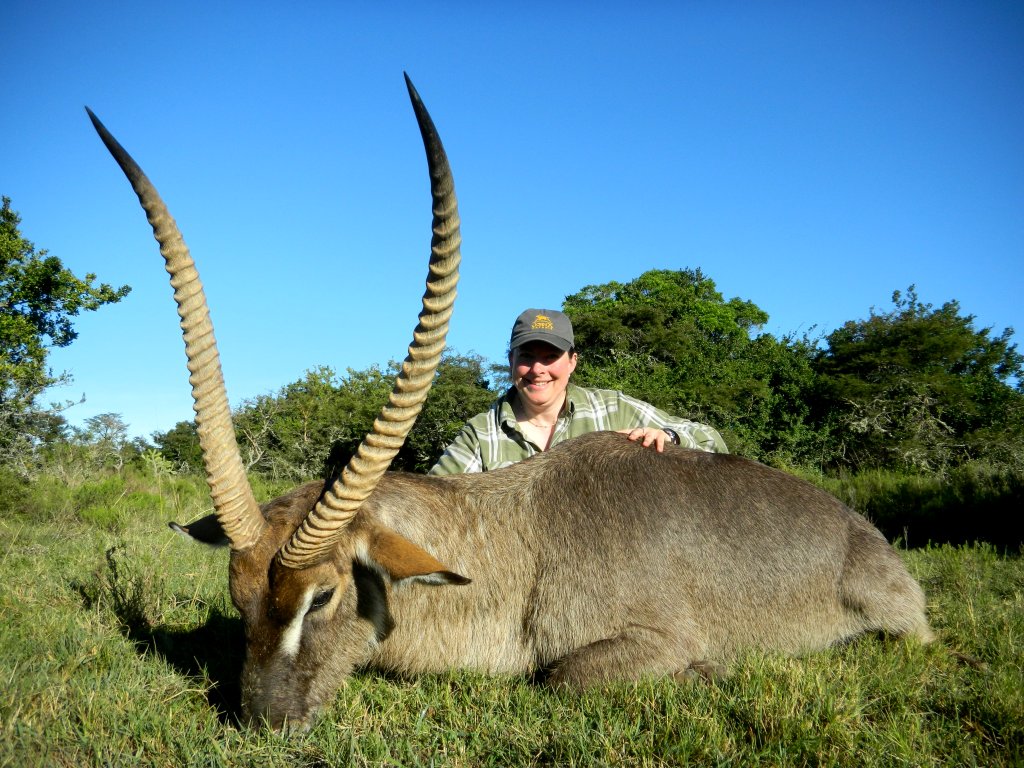 After the emotions had settled and I had time to reflect, I have to admit I feel kind of guilty taking credit for this beautiful trophy. All I did was follow Greg into the bush and shoot when he asked me to. 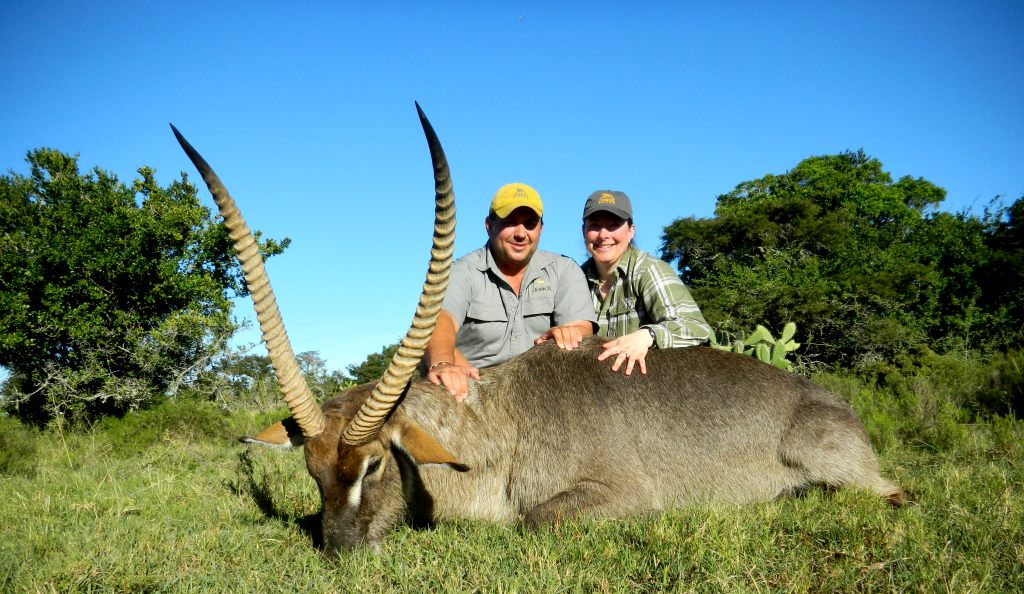 For my Waterbuck of a lifetime I’d like give credit to Greg. Without him and his knowledge and work, this awesome trophy would not have been mine.

Now, as I sit here in Utah, weeks after our amazing adventure had passed, I am already planning my return trip. This was, thus far in my life, the most amazing experience of my life.