With our season coming to a close we find ourselves spread across Southern Africa. Carl and Greg headed up a group from Houston, Texas, on their first visit to Mozambique, while Rick came out of retirement to join our old friend, Ron Machado, in Namibia. Back home in the south, Stix wrapped up what has been one of our busiest seasons from the past ten years.
Steve Travis, Joe Capobianco, and Smith Underwood touched down in Beira, Mozambique, on October 20th, ready for what turned out to be an epic adventure. Having collected our bags and guns, we cleared customs before connecting onto our one hour charter into camp. Within an hour these three guys, including Greg, whom had never visited the Delta, would be touching down in one of Africa’s greatest hunting concessions. A treat that they could never have envisaged.

There were too many highlights to mention them all, but each and every Buffalo was a story on its own. A special highlight for all was our two nights spent in fly camp, camping on the edge of the swamps. The adventure of camping in the vast wilderness of the Zambezi Delta proved to be a once in a lifetime for the guys, but the sight of four downed Cape Buffalo the following day was a sight not even I had seen before.

The herds were massive, in excess of 1000 Cape Buffalo – spread across the horizon and into the distance. The quality of bulls we saw blew us away, and after more than a dozen safaris to Mozambique over the past seven years, I recon we saw more old and mature Buffalo than ever before. While the Buffalo were there, and the work was done to get the guys into shooting positions, the guys sure did not disappoint.

While Cape Buffalo was our priority, the guys weren’t losing out on some world-class plains game too. A gnarly old Bushbig gave Smith a great opportunity to earn one of these rarer trophies from Africa, while Joe enjoyed his pursuit for Nyala, coming away with a beauty. For Steve and I it was like old times, we just enjoyed Africa and the many blessings that go hand in hand on a safari, lucking into a number of world-class trophies. For Steve a Sable was an important addition to his ever-growing trophy room, which I was glad we scored success on – a great bull it turned out to be.

In the end if I had to pick my favorite I’d have to say it was Steve’s Chobe Bushbuck. Steve is the luckiest Bushbuck hunter out there! 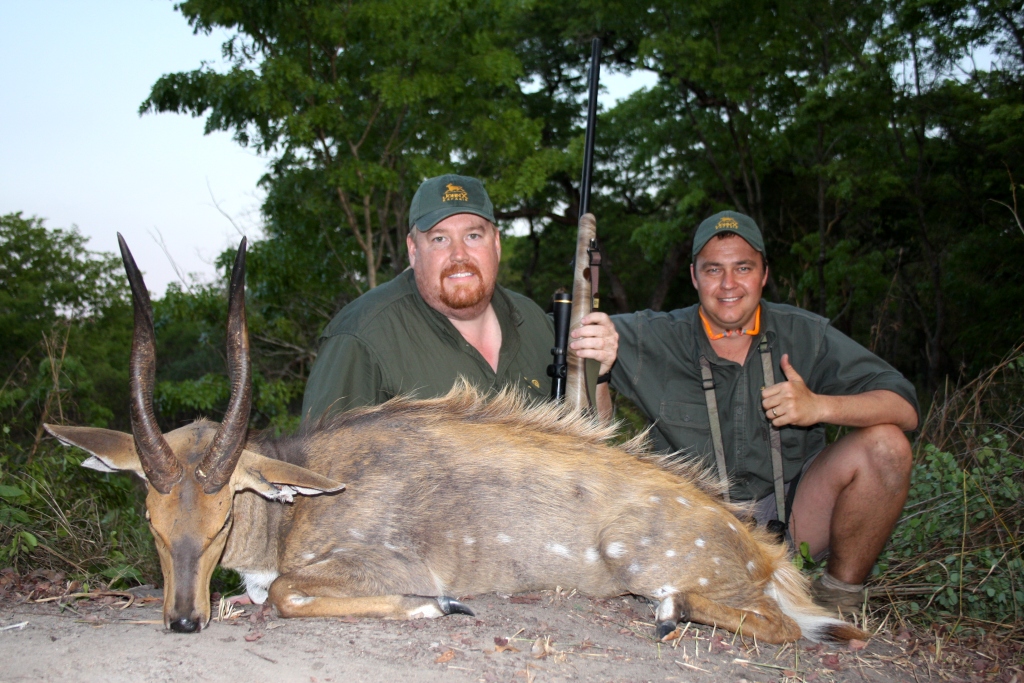 This particular ram only adds more class to an already insane Bushbuck collection!

When all was said and done it was agreed that the week in Mozambique turned out to be a safari for the ages. I have no doubt that Smith, Greg or Mike would ever forget the local villager who so kindly offered his assistance in tracking a weary group of Buffalo whom frequented his section of forest. While his tracking skills could be compared to that of a world-class poacher, if that ever existed, and doing so without shoes should be commended, but the sight of him extracting a two-inch thorn from his foot with a machete will be edged into their stories forever. The experiences were endless and the stories will be enjoyed for many years to come, or at least until we all gather around a crackling campfire in the not to distant future, as who knows where our next adventure will lead us?

Further south saw Stix and Dylan wrapping up one of our busiest seasons from the past ten years. It would be Gregorio’s first trip to the East Cape, one he most certainly enjoyed. Joining Gregorio was his daughter, Leslie, making the best of our renowned Big 5 photographic opportunities, coming away with a number of fantastic pictures. 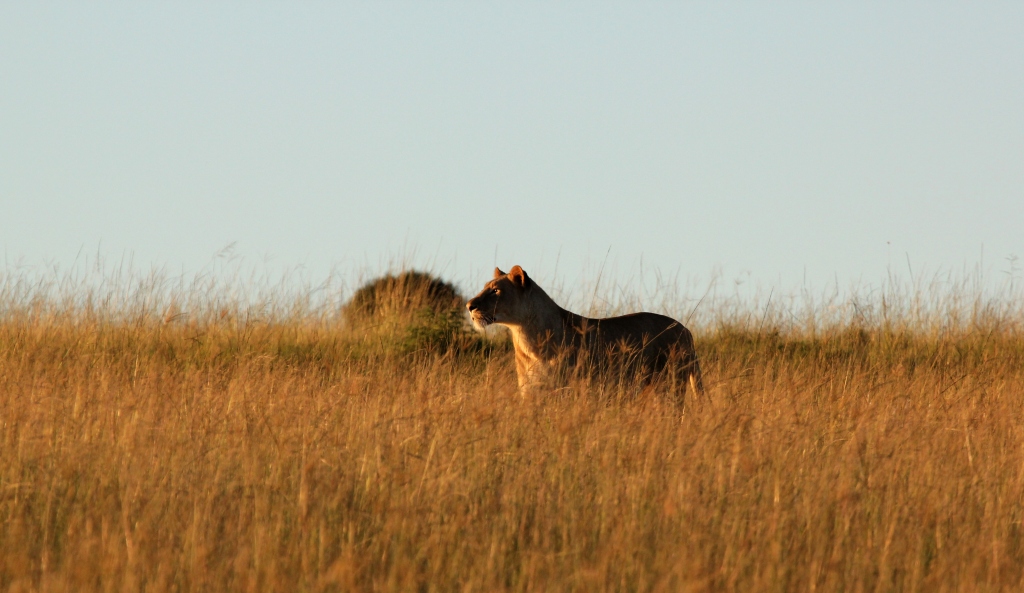 As is custom this time of year down south, the rains had arrived, making for a couple of  wet days. Neither hunter nor the game were complaining as our Karoo areas most certainly needed rain. A dry snowless winter has left us with concern for some of our northern areas, but with some luck the rains will continue quenching the lands thirst and transforming it into a wonderland.

Gregorio enjoyed success in hunting Sable, Gemsbuck and Springbuck in the Karoo, before getting back to the coast for a Cape Bushbuck and Red Hartebeest. 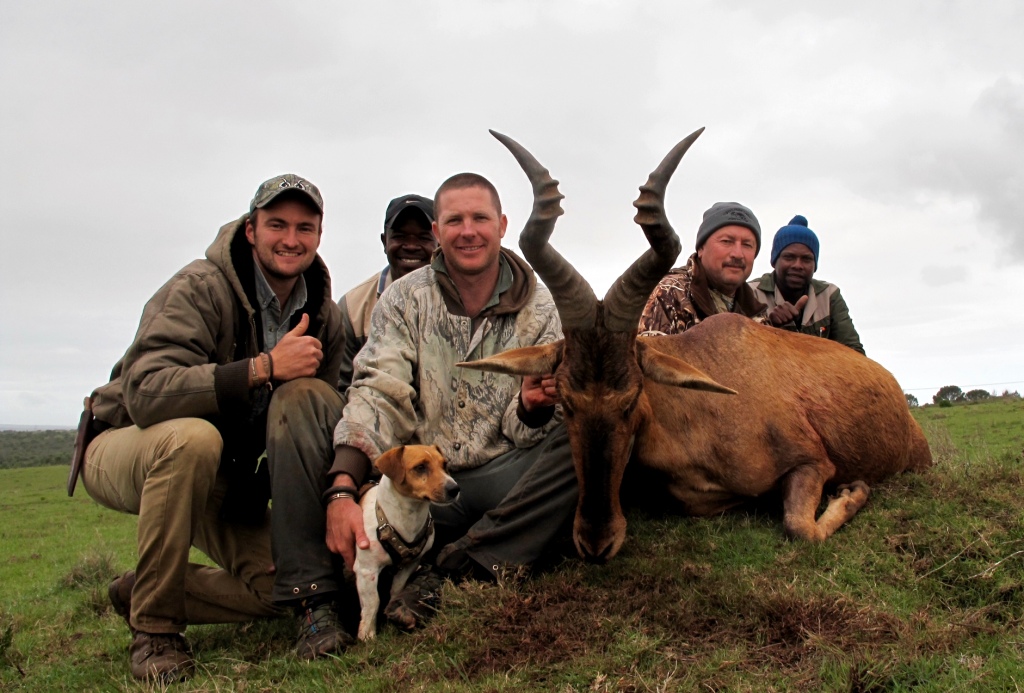 With things drawing to an end we saw Rick coming out of retirement to join our old friend, Ron Machado, on his hunt to Namibia. Ron, has been hunting with John X Safaris for as long as I can remember, becoming a permanent member of the family.
As per usual his safari started in South Africa with a few days of R&R at Lalibela before we headed up to the Karoo for a Copper Springbuck with Niel. Not only did Ron make a long shot count on his Copper, he did so under tough conditions too – a remarkable shot on a superb ram. As always Ron’s camera is close at hand, capturing some remarkable pictures of our newly acquired Burchell’s Golden Gemsbuck – a future must for all serious collectors. 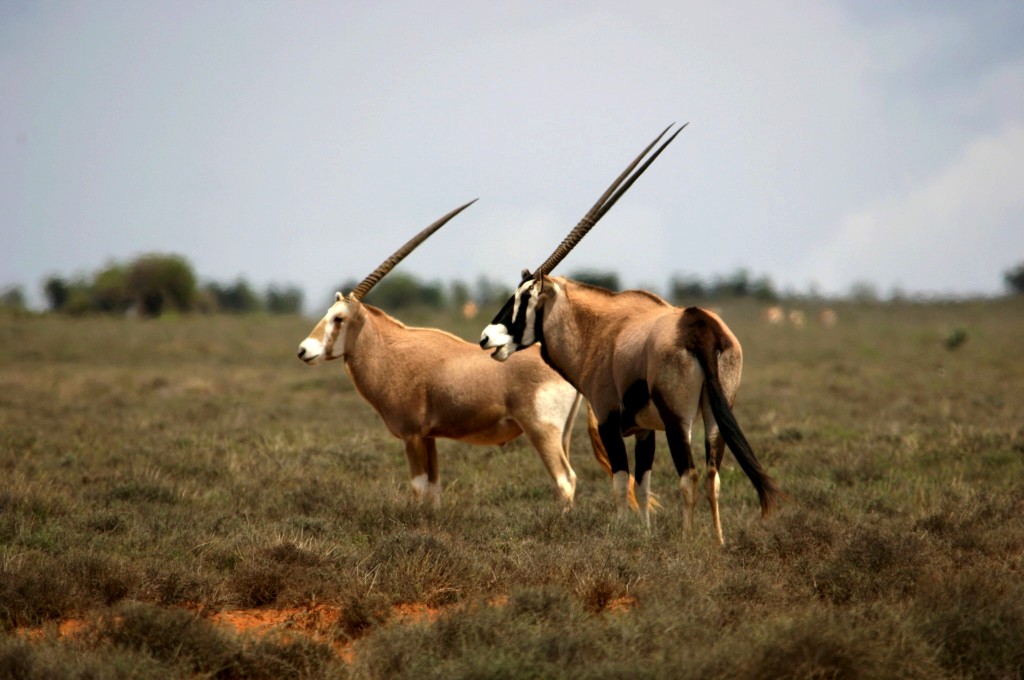 As our southern leg of our safari came to an end we bid farewell to Ron and Rick as they headed off to Namibia for Ron’s main reason for his safari – A Damaraland Dik-Dik.

From Windhoek, Namibia , the guys travelled north to Damaraland, right up to the border of Etosha National Park. Gunter and Reinhild Scwhalm would be our hosts for the hunt, sharing their impressive areas and facilities. 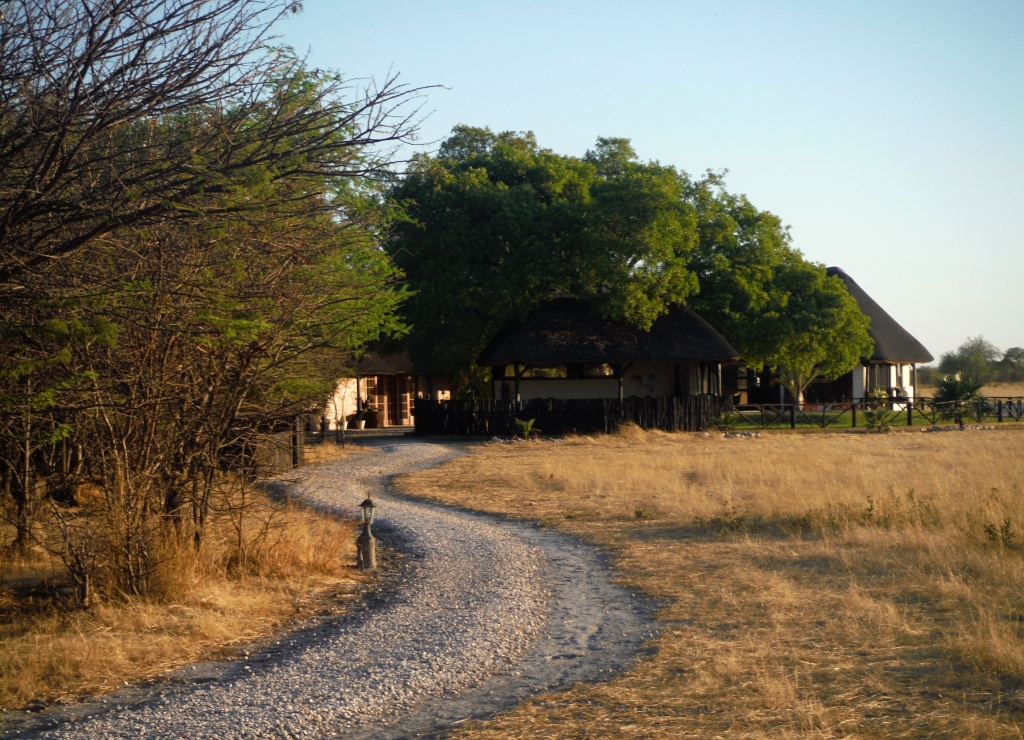 As expected when visiting a new area for the very first time, we felt anxious to see the game, hoping the hunt would prove a success. . Damaraland Dik-Dik are tiny, they form part of the tiny 10, and the terrain they inhabit can make a hunters life difficult if rains were late, leaving more cover than usual during the late season. With much anticipation they headed out that first afternoon.
That evening I received the report from Rick – Great area, super hosts, and plenty of Dik-Dik! That’s all I needed to hear. 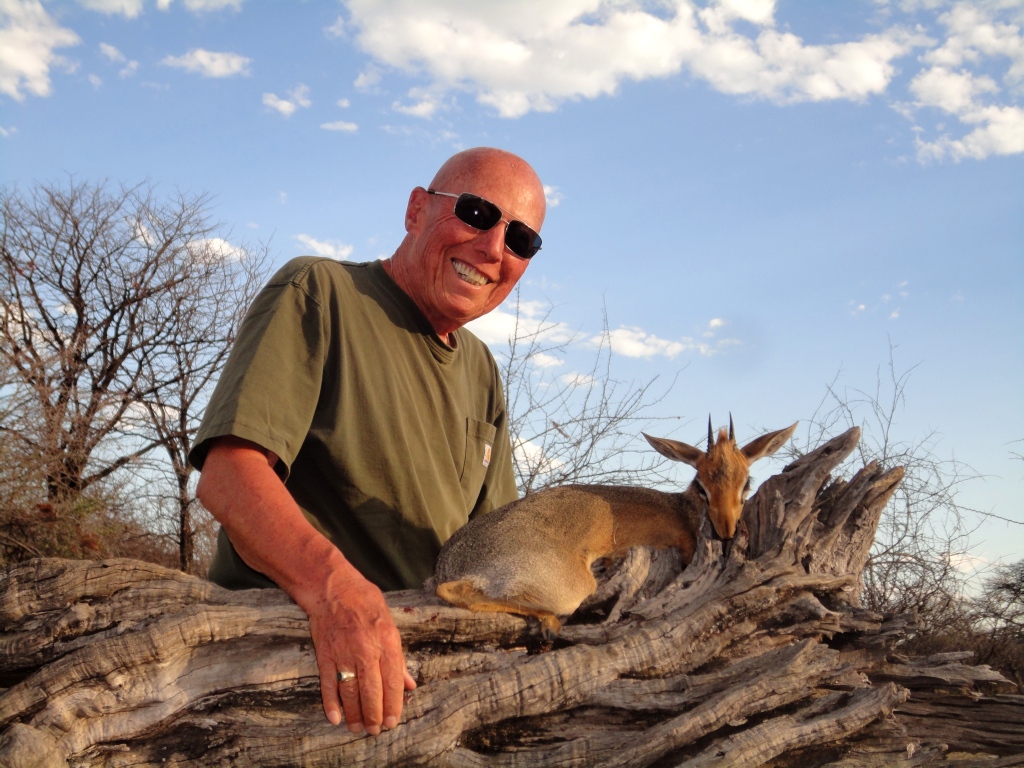 Within three days Ron had his Dik-Dik – A magnificent ram of over 3″, easily qualifying as a gold medal, and a fantastic addition to his Tiny 10 collection.

With the all important Dik-Dik in the salt the guys visited Etosha National Park for a day of touring before heading onto Windhoek, Luderitz , and Walvisbay.

Touring the famous Skeleton Coast and small traditionally German towns proved extremely interesting. While the desert is a harsh environment it was interesting to see the wildlife that thrive in such rugged conditions.

In closing this months report, I wanted to share a special picture with you. It’s not everyday that one has the opportunity to give someone who has given so much of himself to John X Safaris, something he has truly dreamt about.
You all know our head Professional Hunter, Greg Hayes, the big bubbly guy whom likes hunting more than anyone you know. The same guy who arrived at John X Safaris more than twenty years ago, and still guides with the same enthusiasm as his first day on the job. For many of you he’s the reason you come back year after year – to be a part of his safari.
Now Greg and I go back a long way, as you could imagine, as a young boy with only a sister, I latched onto Greg like a big brother.  Needless to say we spent a lot of time together, having fun and causing untold headaches for Rick and Sue over the years.
So while up in Mozambique I pulled a few strings and called in a favour or two….. 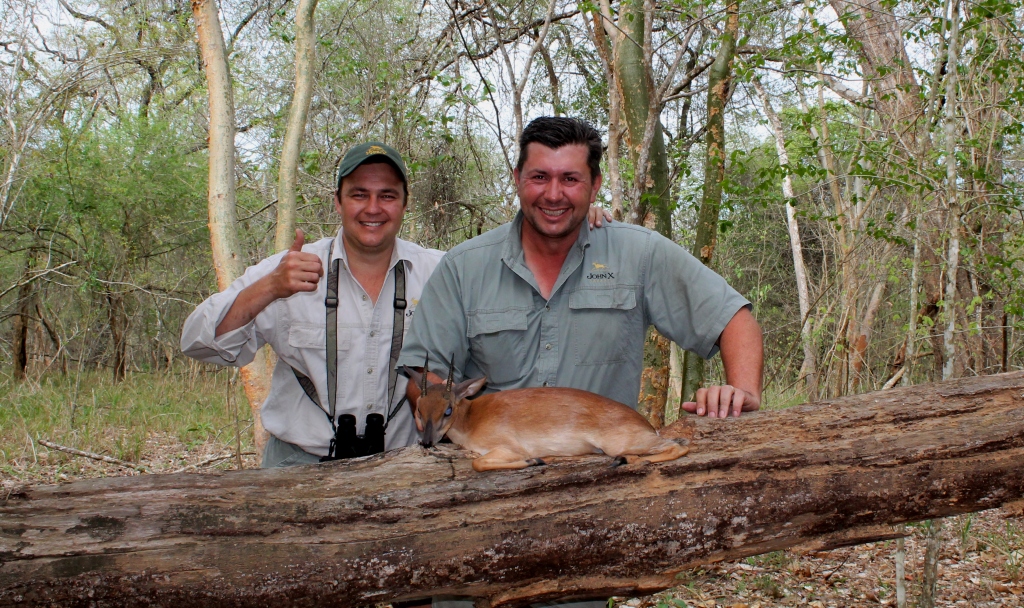 What a privilege to have guided Greg on his Livingstone Suni! From long hot days hunting Springbuck in the Great Karoo to a Suni in the Zambezi Delta, who knows what’s next?!

What a fantastic month it proved to be – a fitting end to what has been a world-class season. 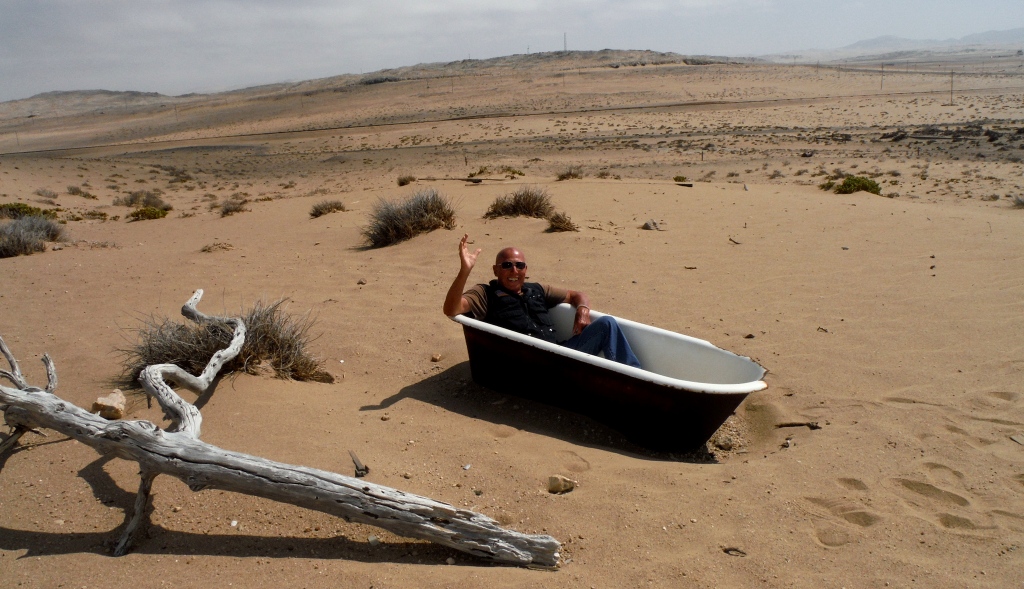 Until next time, from both Ron and us… Ciao! 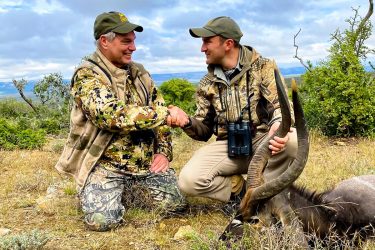