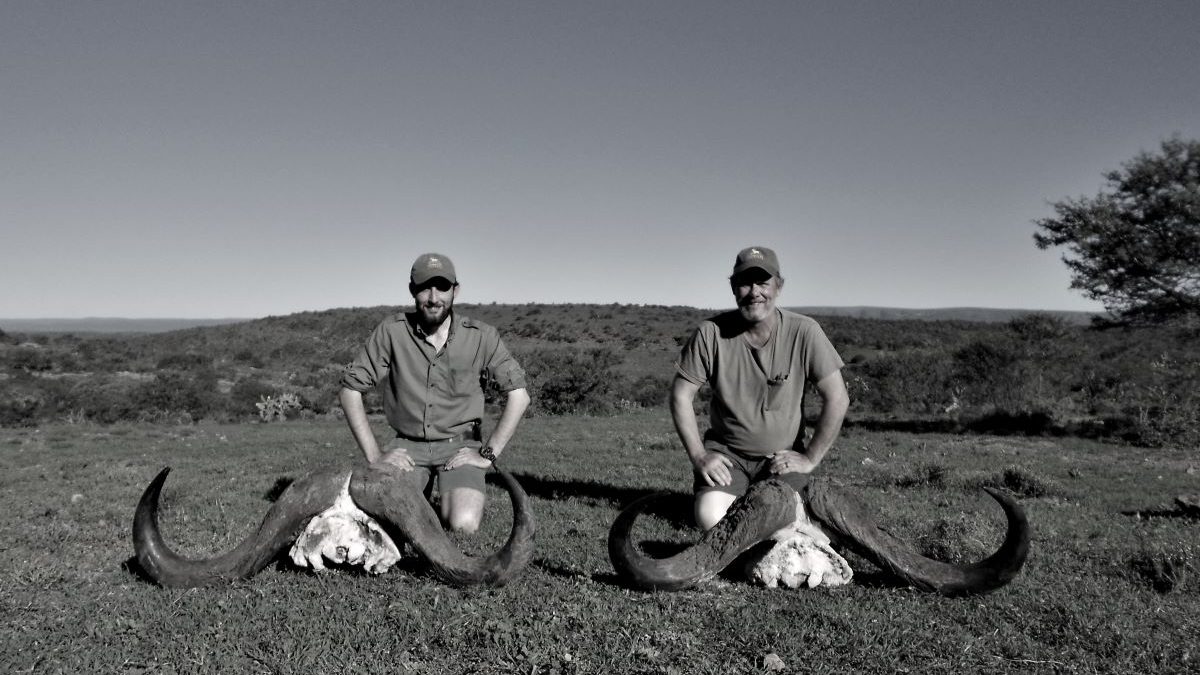 Late April saw the arrival of the father/son duo of Scott and Xavier McCaig. Scott had previously joined us on safari with his son, Skyler, some fifteen years ago for their first taste of Africa, returning again this year to pursue Cape Buffalo and a host of Plains Game Species. Both men had their sights set on the infamous forest Buffalo of Woodlands Safari Estate, hoping to bump into these weary old Dugga Boys who drift in and out of the herds from time to time.

Scott teamed up with Professional Hunter, Greg Hayes, while Xavier joined Professional Hunter, Martin Neuper. A superb Waterbuck on Xavier’s first afternoon got him off to a great start, but nothing would compare to Scott’s luck. For quite some time we’ve been capturing trail camera images of a certain old Dugga Boy which had a peculiar manner in which he carried his head. It was mostly bent at an acute angle and on one particular occasion we actually watched it from a cliff fighting another bull using his “kink” to his advantage on gaining the upper hand in the fight. He was an impressive animal with a huge body and magnificent spread with a sold boss, which naturally saw us pursuing it on a regular basis, which intern turned him into a smart Cape Buffalo.

Having seen the bull on a few occasions prior to Scott’s arrival, Greg headed out that first morning with a sense of optimism, but a dose of reality not far behind. We’ve all tried this bull for the better part of two years and there was a good reason he was still out there. Arriving at the valley where the bull was last spotted the hunters settled down for a good glassing session when suddenly Greg’s son, Josh, waved Greg over urgently. Right there below him, a mere sixty yards out, they watched the old bull feeding in silence. 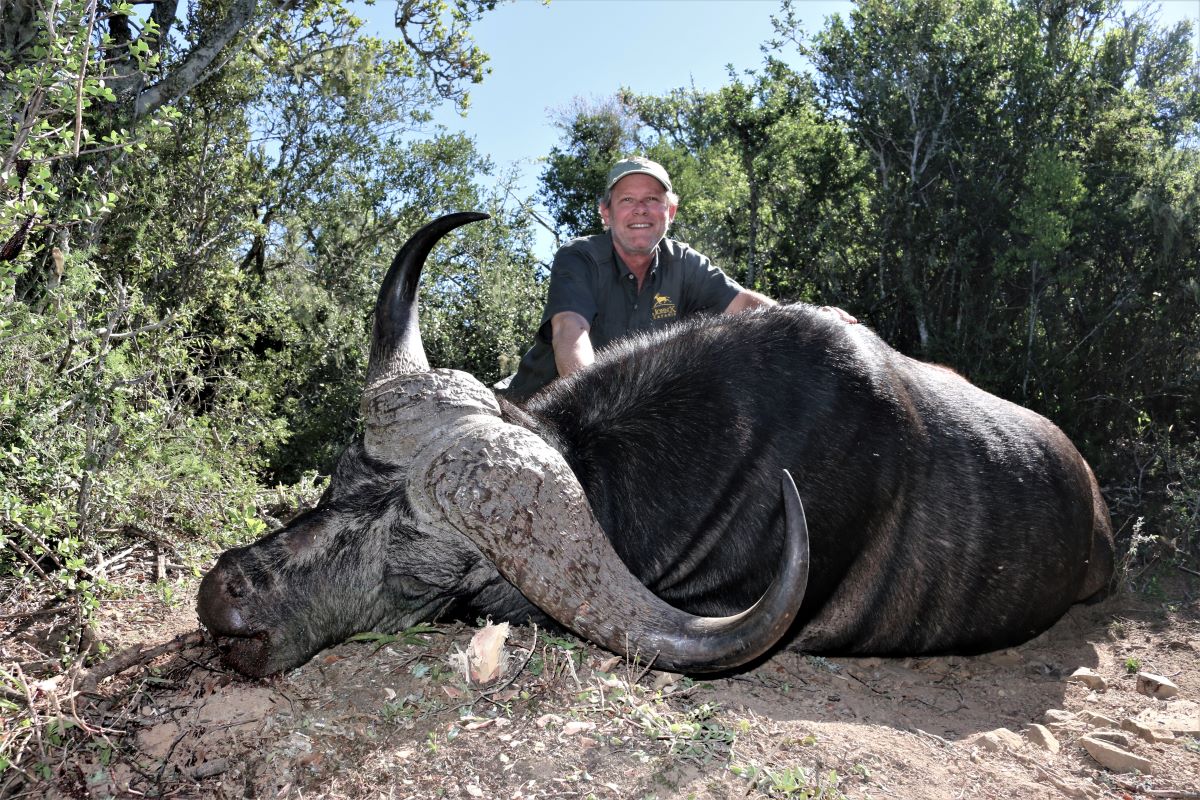 Neither Scott nor the rest of the team could believe their luck, but when it comes to Cape Buffalo one should never look a gifted horse in the mouth. What a fantastic bull he turned out to be.

In the coming days Xavier would enjoy a number of exciting walk-ups on Cape Buffalo with his newly built 375 H&H Rigby, each time having to deal with various scenarios ranging from wind swirls to bulls that just weren’t there yet in age and strophe cows with young calves, all preparing him for the moment everything would finally fall in place. A great Impala, Cape Eland, Blue Wildebeest, Warthog and a particularly heavy old Kudu bull with loads of character got him closer to his Cape Buffalo with each passing day. 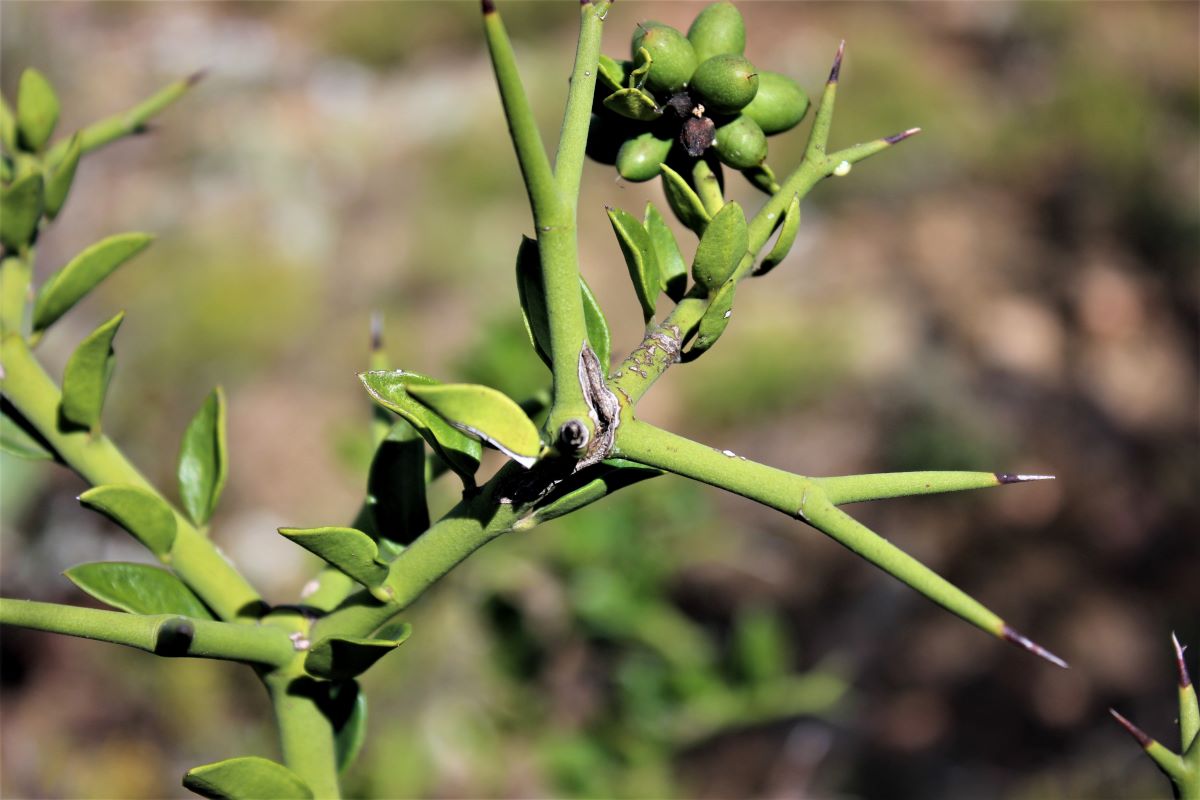 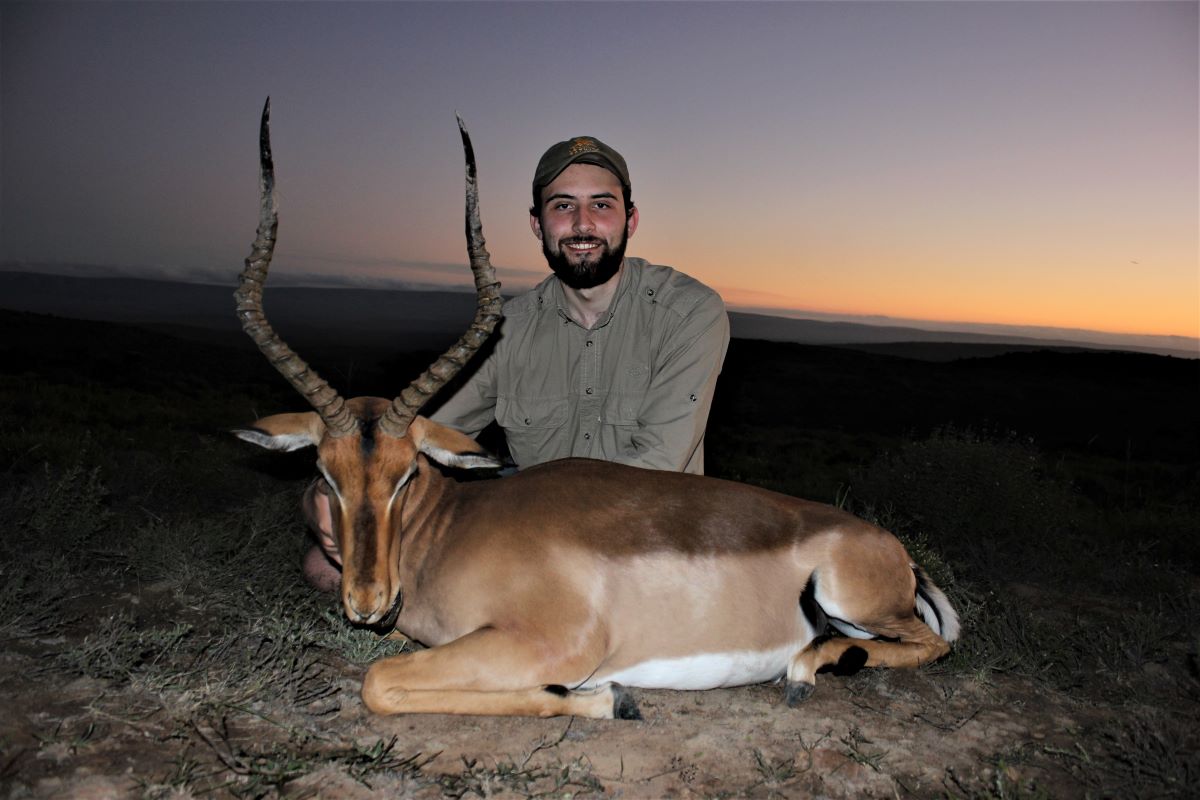 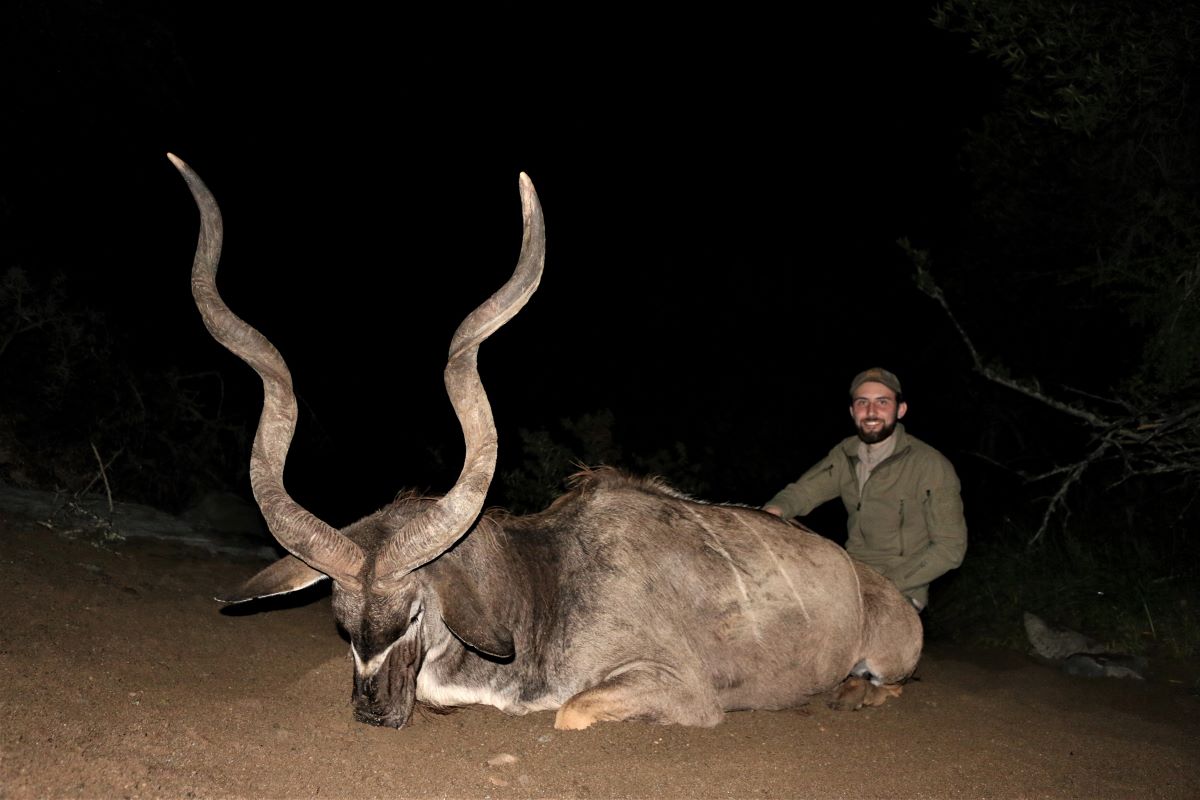 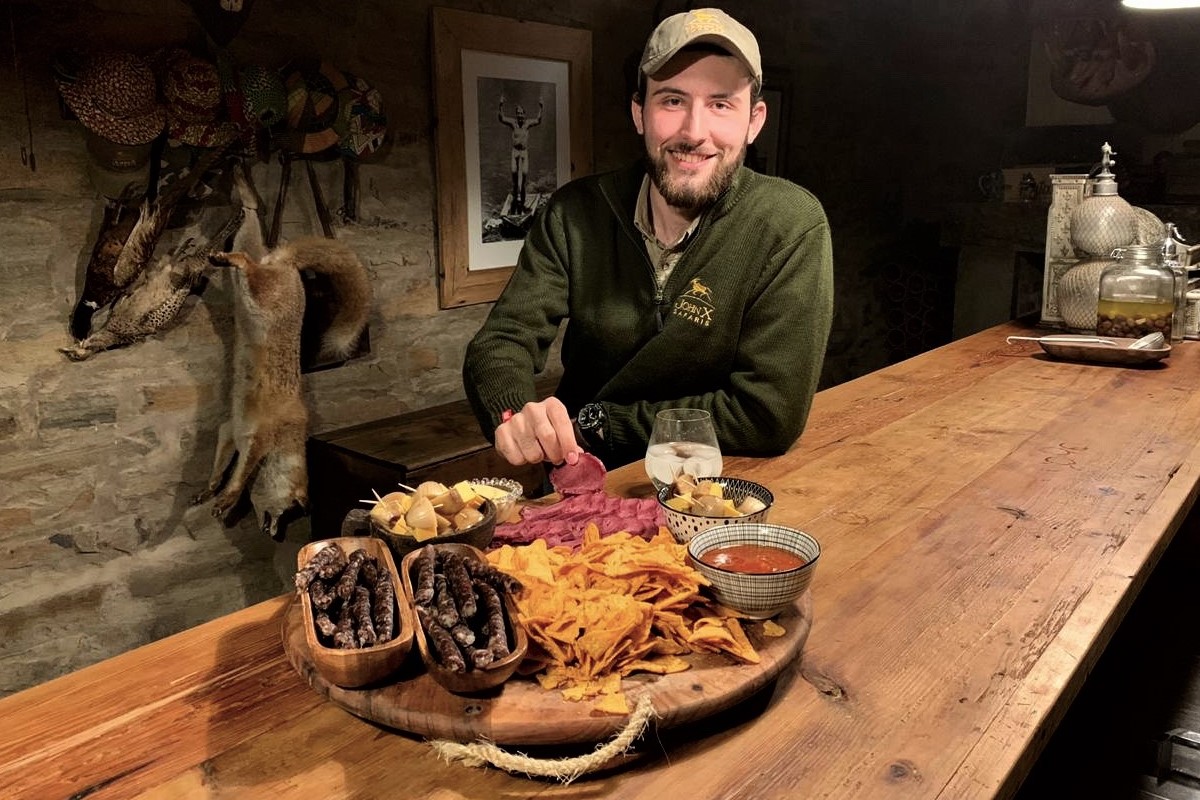 Scott on the other hand was enjoying the ride with a big bull in the salt making the most of a number of plains game species he had not hunted on his previous safari. His Mountain Reedbuck was not only one of his favorites to hunt, but a treat for dinner a bit later on in the safari once it had hung for a few days seeing the meat mature. 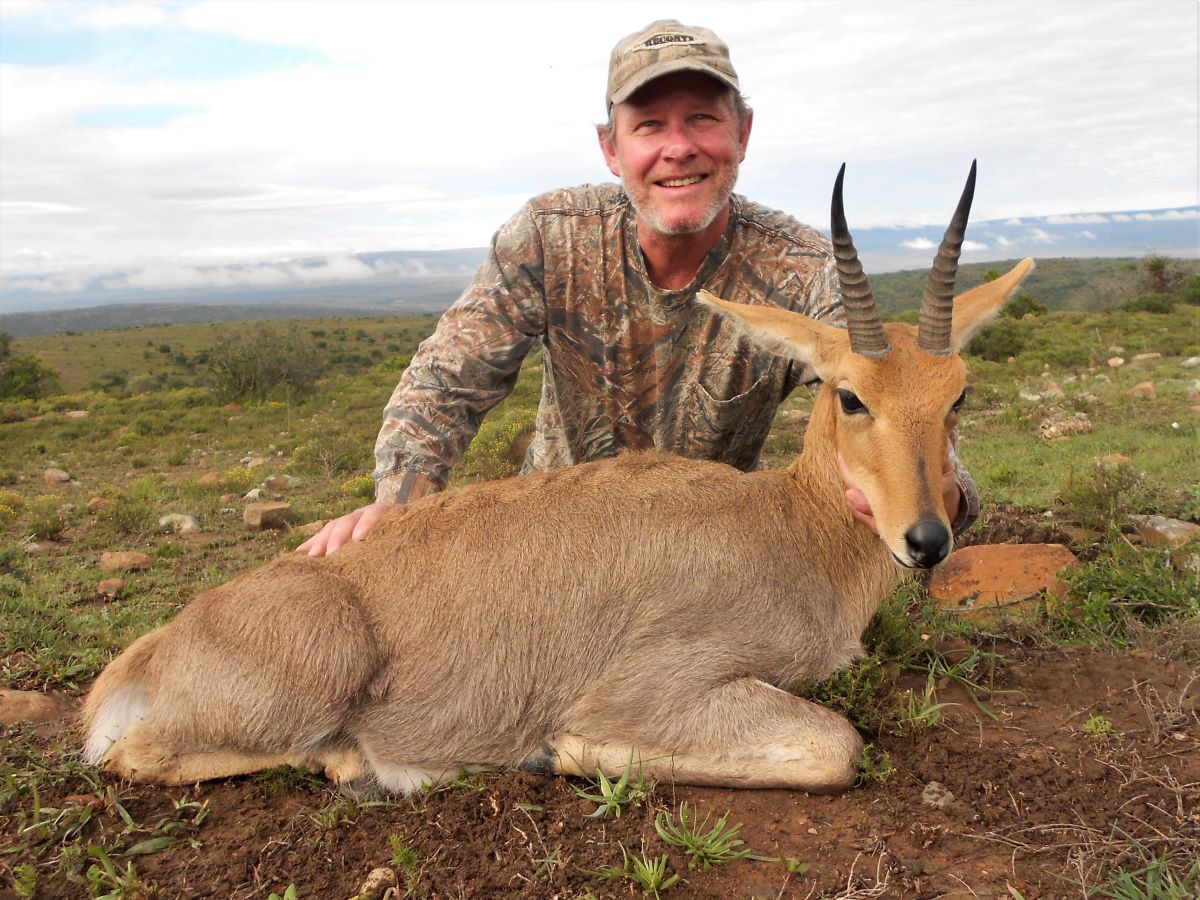 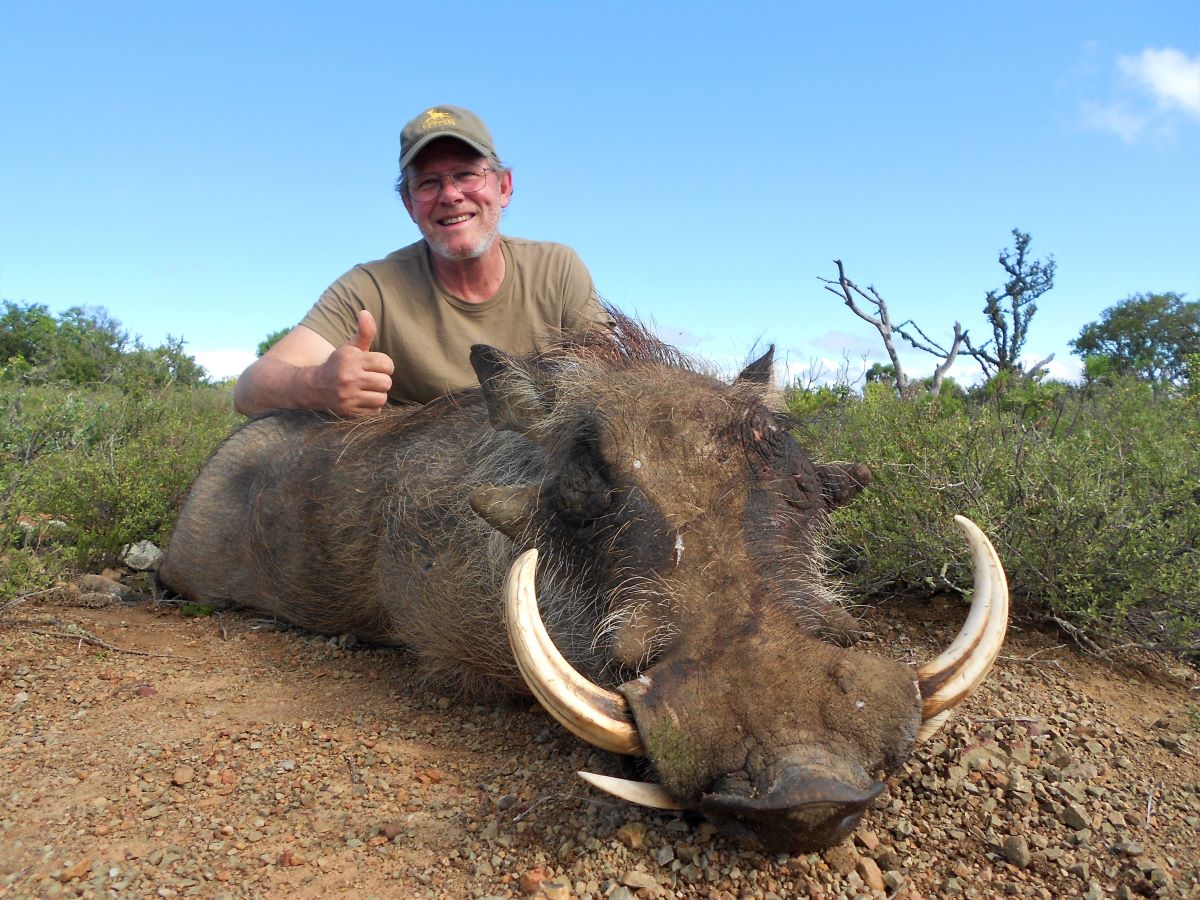 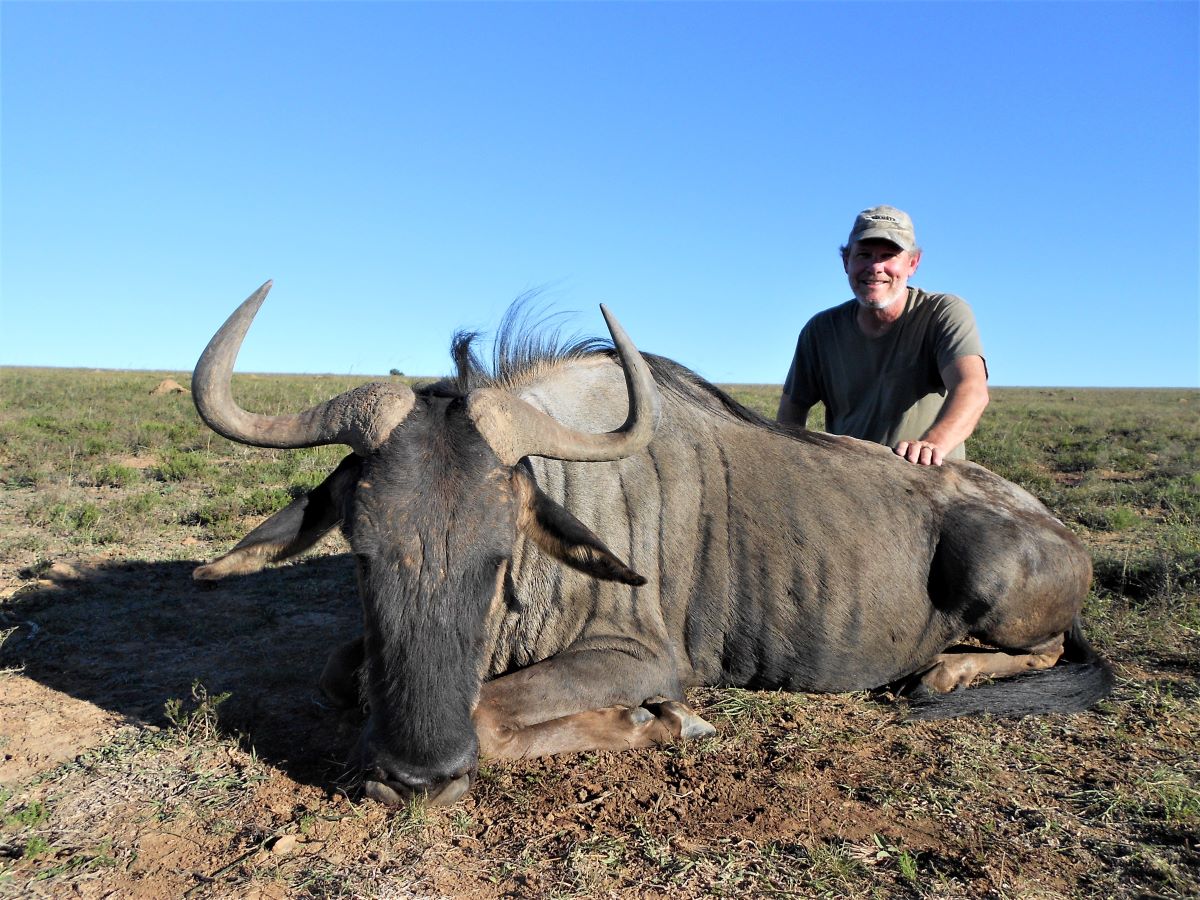 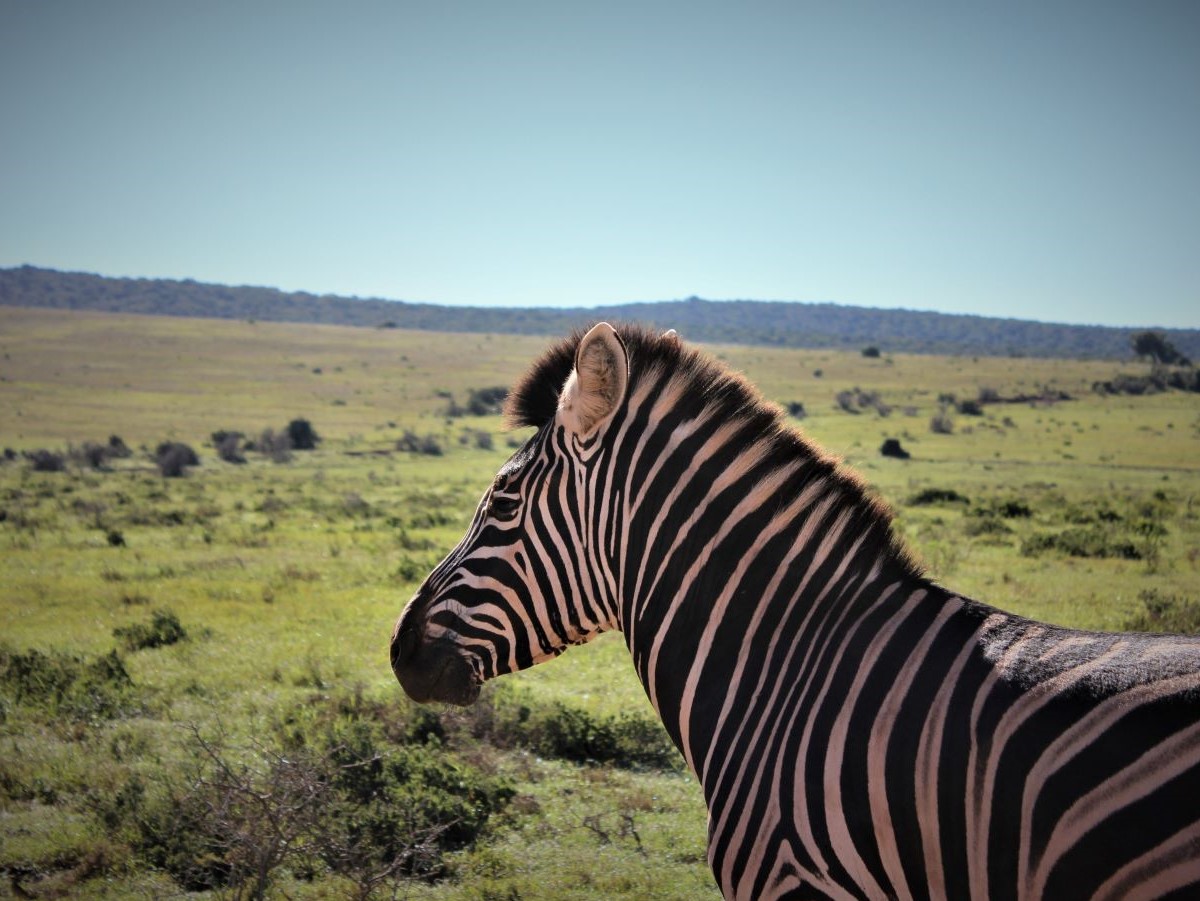 With a cold front moving in rapidly from the south blowing in much-anticipated rain our Buffalo hunters were still hard at it. Having spotted a Dugga Boy on a far-off ridge the guys decided to give it a go. Using a thunderstorm to muffle their approach they were able to get within 48 yards of the bull. And when the rain finally lifted and the hunters were drenched to the bone the bull gave them the opportunity they were after. 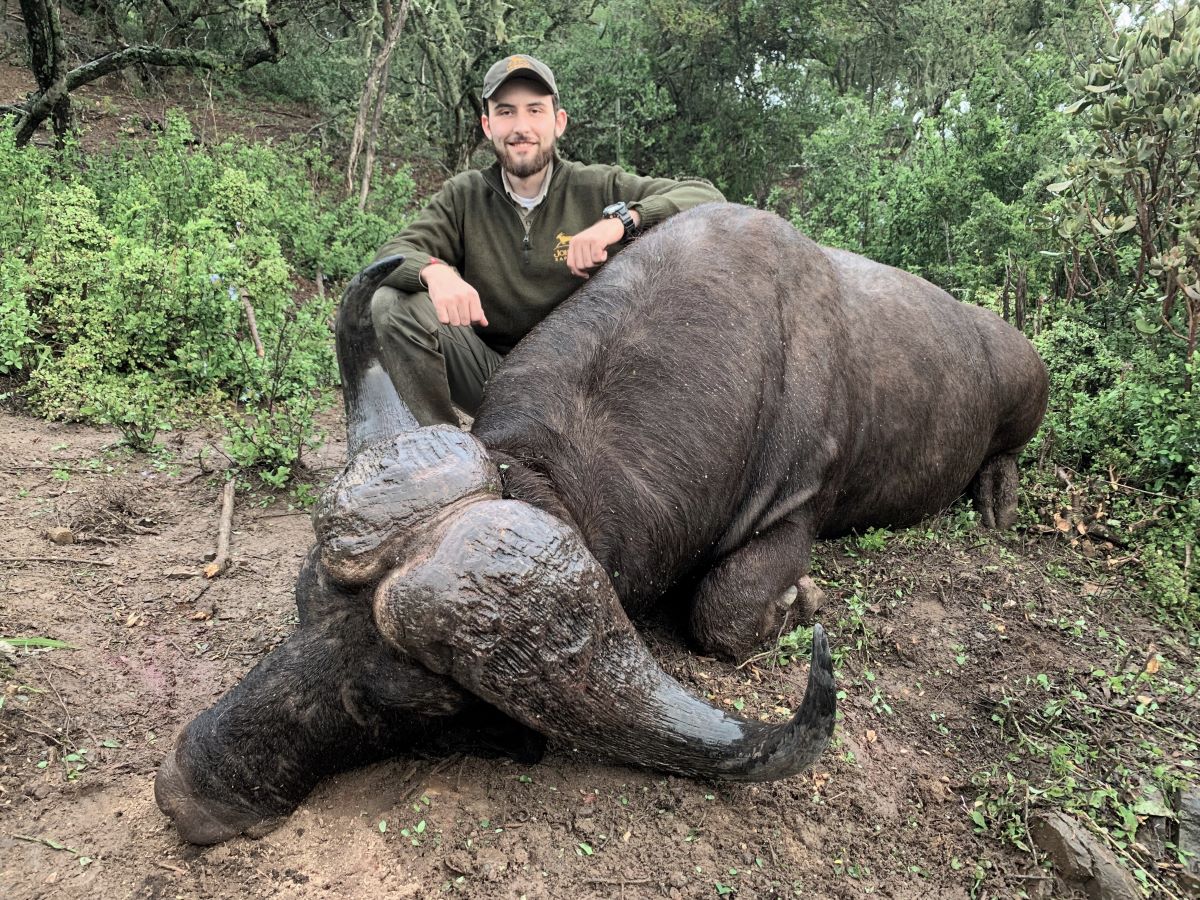 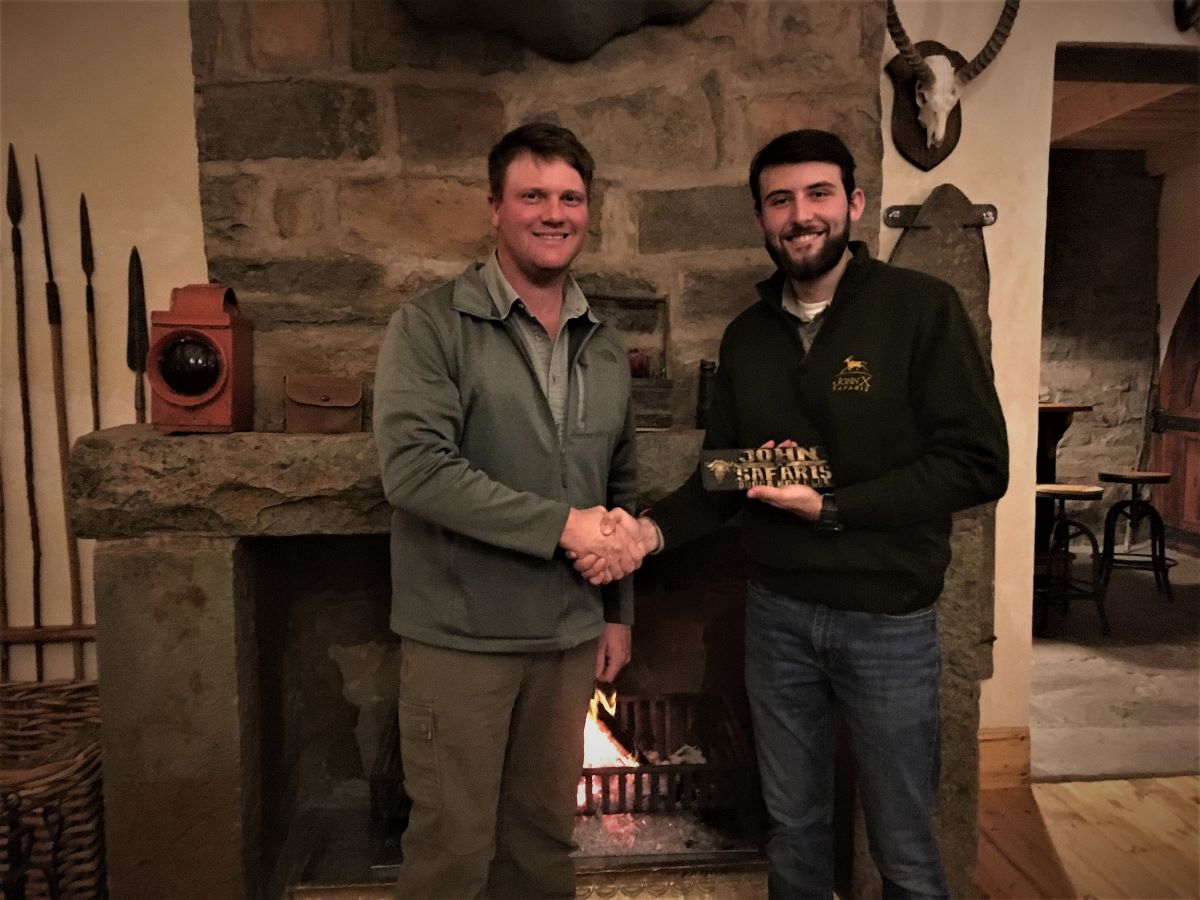 Xavier not only hunted a gnarly old Cape Buffalo, but joined the elite John X Dugga Boy club, coming away with an experience second to none having hunted the forest bulls on their turf, succeeding in doing so successfully. 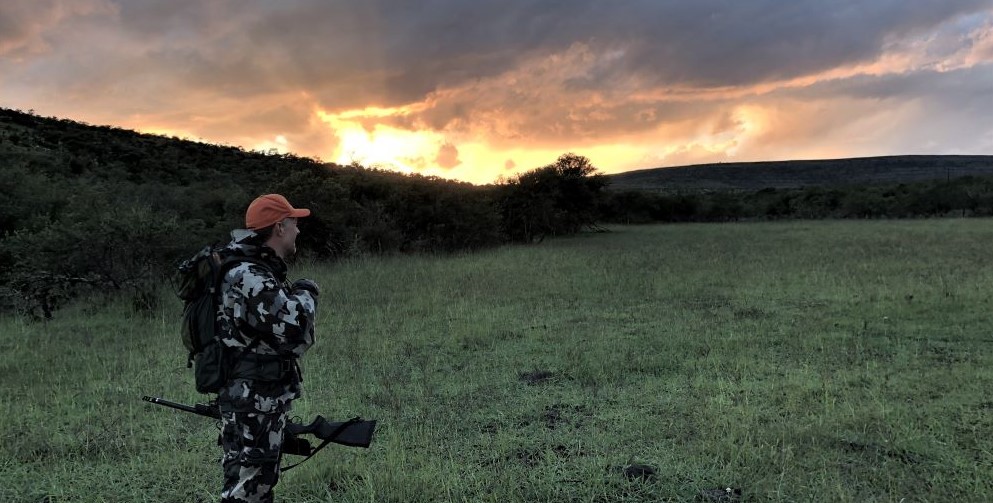 At the same time as the McCaig’s were enjoying their success we welcomed the return of Alex Jolley and Kelly Maloy. Alex had invited along a number of his family members including his brother, Kent, as well as dad and uncle, Vernon and Glen, and a friend Scott Brousard. Kelly would be off on a special hunt to the mountains while the Jolley’s focused their efforts closer to our base, Woodlands.

As what is often the tradition in Africa the guys started off with Impala, before Uncle “Bad” Vern got going on some bigger species including Zebra and Red Hartebeest. An exciting Kudu hunt involving the entire family would be a highlight for Kent as he had to dig deep and work hard to hunt a superb bull. 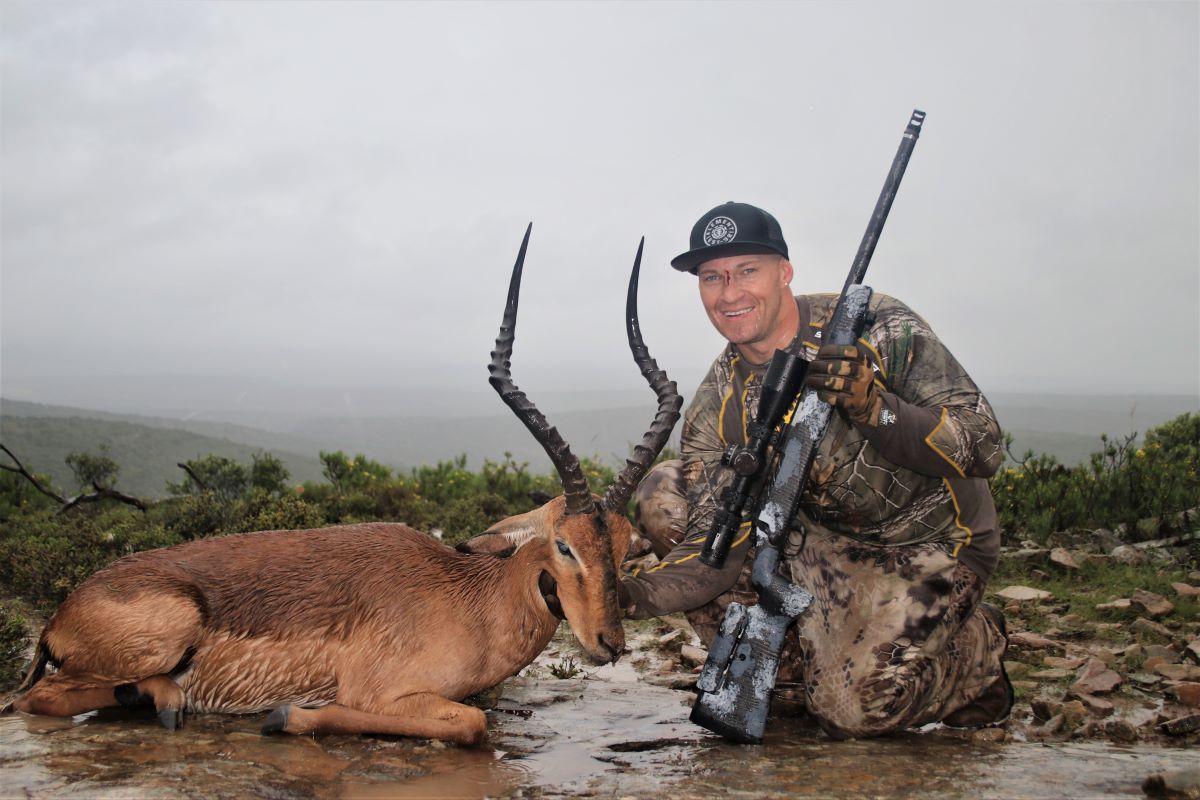 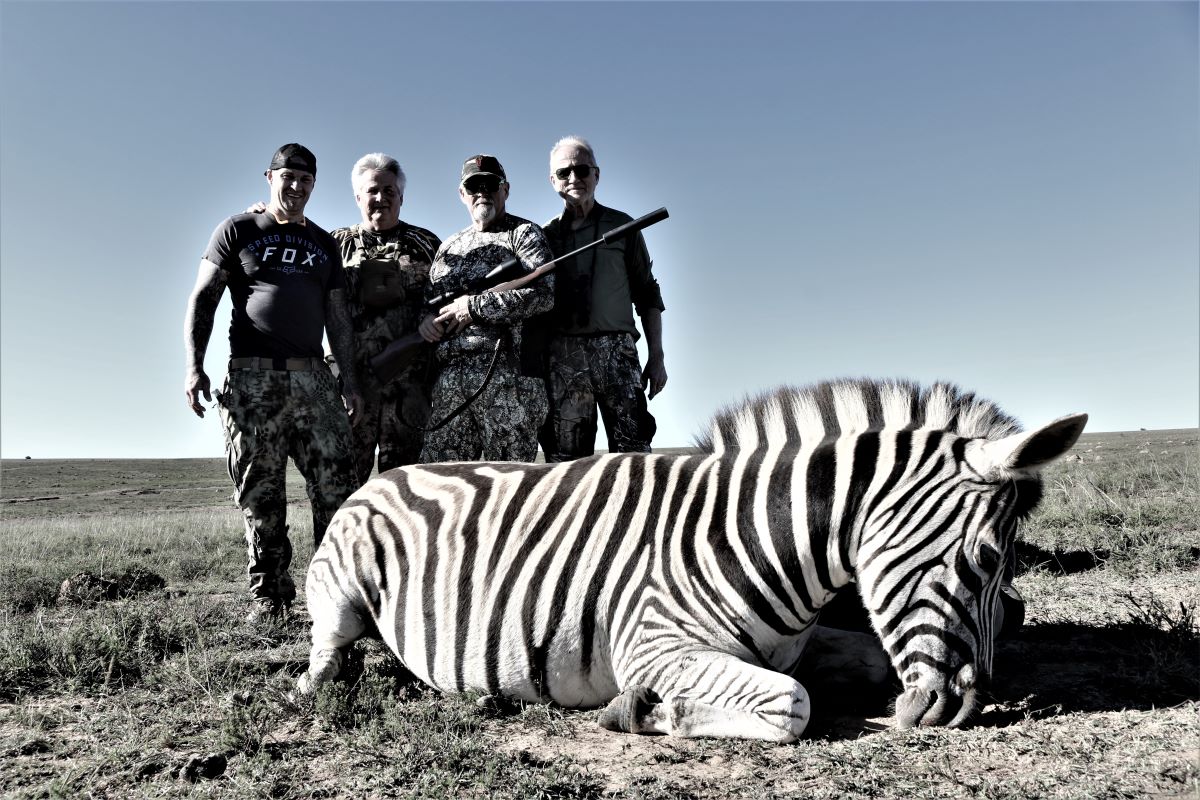 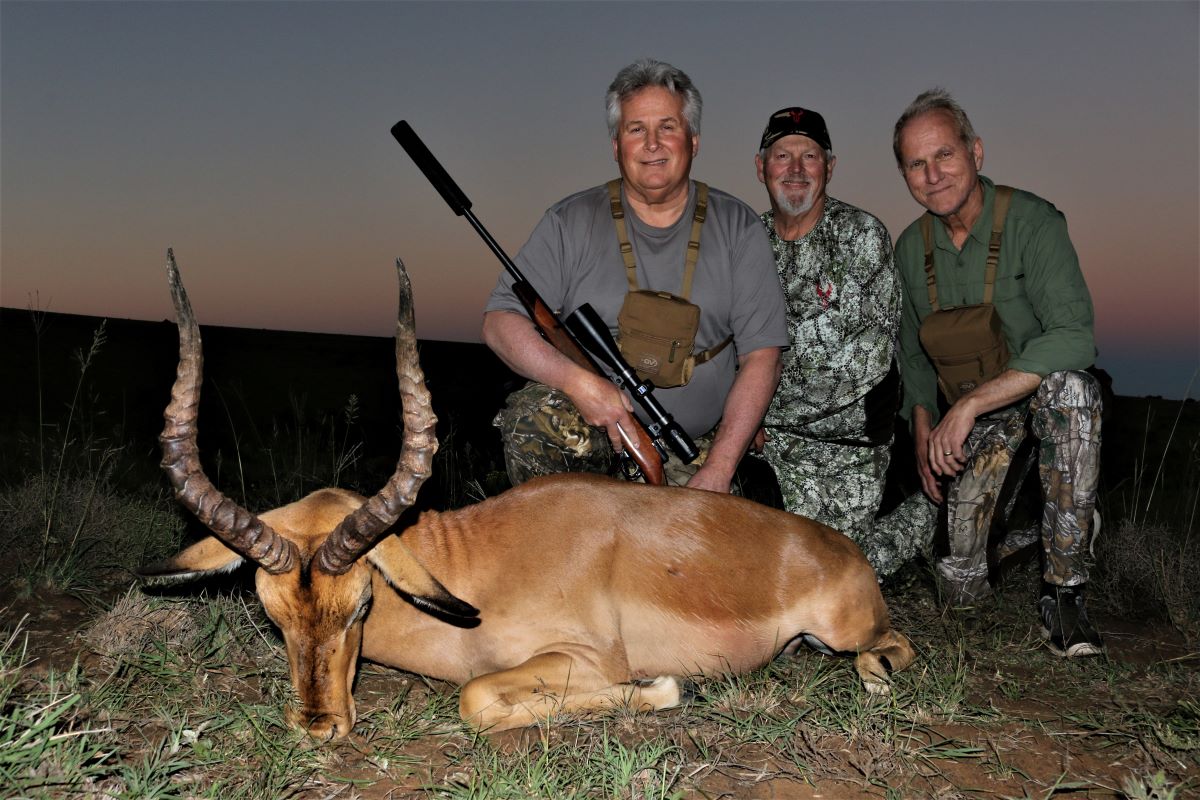 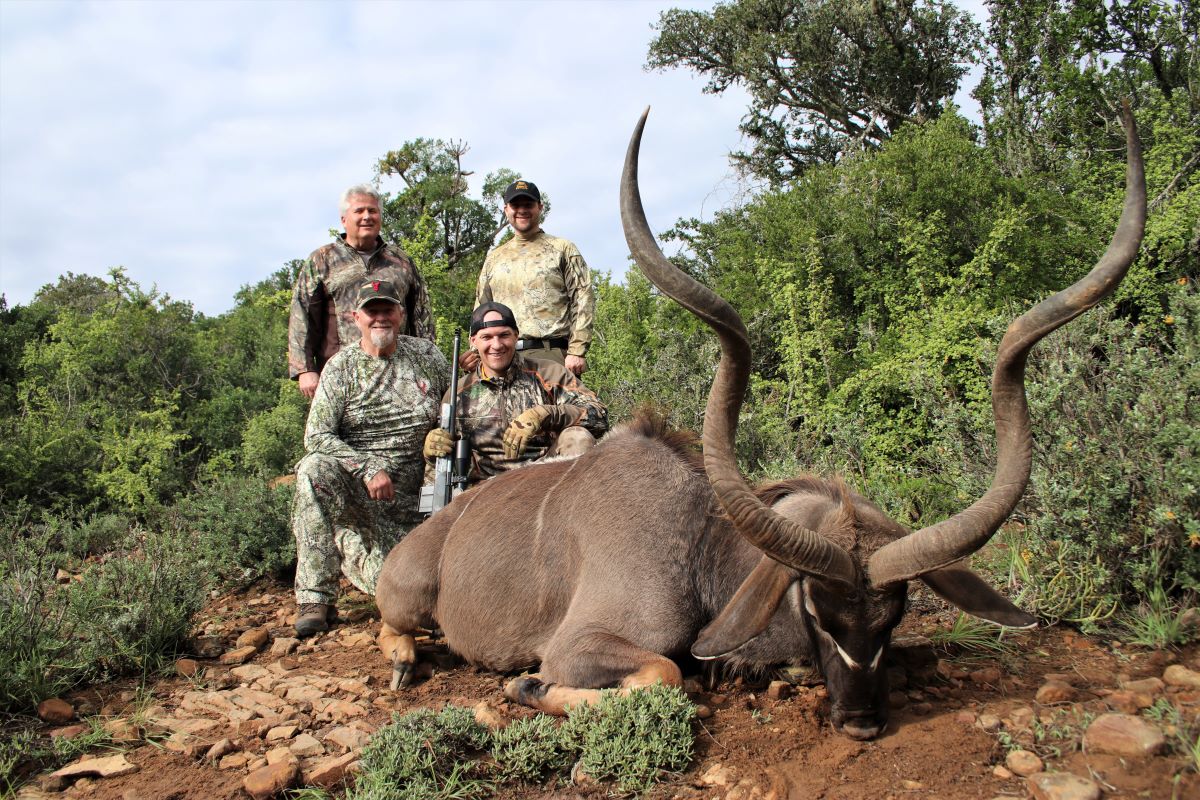 Alex was sporting his very own custom-built 300 Win Mag long-range system, hoping to gain success from the months of practice leading up to his safari. We hunted hard for a big Warthog, but the rut just wasn’t that “hot” yet, making tough conditions even more difficult. A huge Waterbuck gave us the opportunity of a lifetime which Alex wasn’t going to pass up, with his Cape Bushbuck proving to be one of our best afternoon’s out.

Sitting up on a hill overlooking alfalfa fields along the Great Fish River we watched a number of Cape Bushbuck meander in and out of the heavily wooded river foliage in the late afternoon. Having seen a few young rams and females we finally set our sights on a beautiful old ram at 600 + yards out. Making an approach on the ram was hardly an option as the terrain didn’t lend itself to an opportunity. Alex decided to give it a go. He got set up, checked his variables and double checked again before settling down onto his 300. He touched off a 638 yard shot with two minutes of wind drift which immediately anchored the ram. What a setup and shot to have witnessed. It was just reward for the hours of precision and practice to pull off a shot of that class. 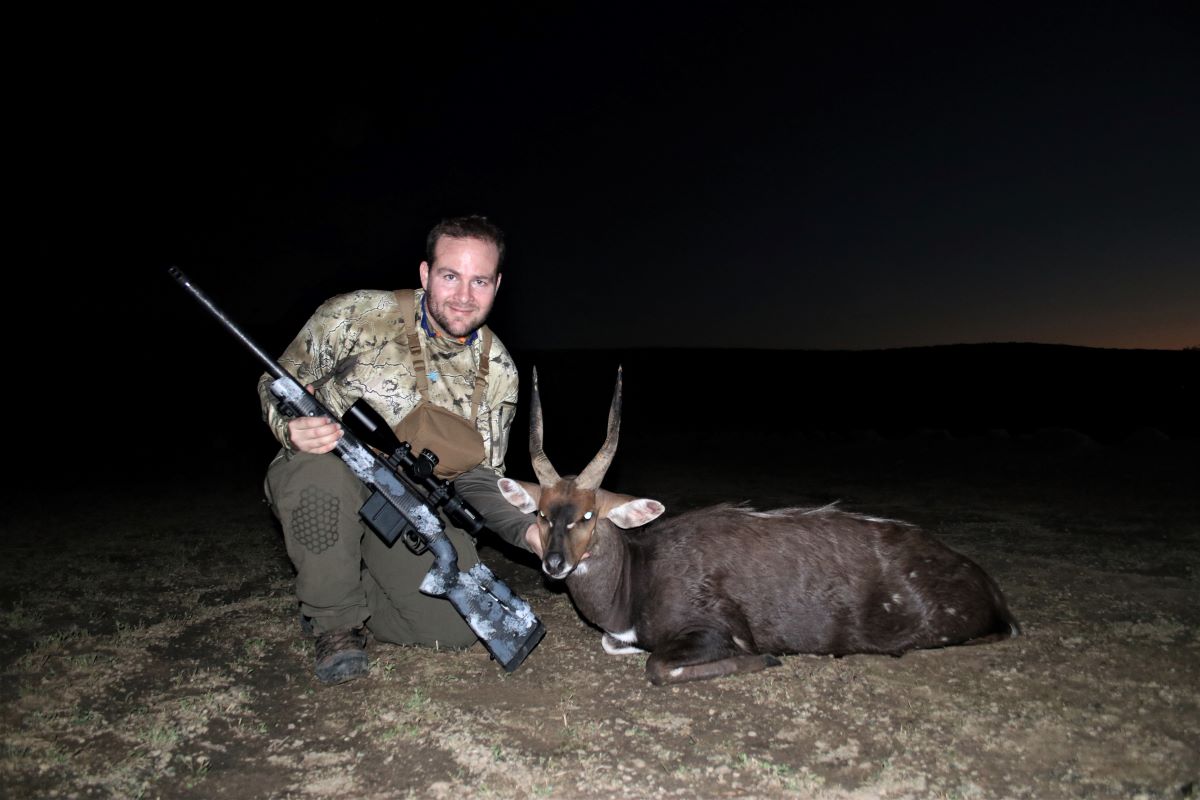 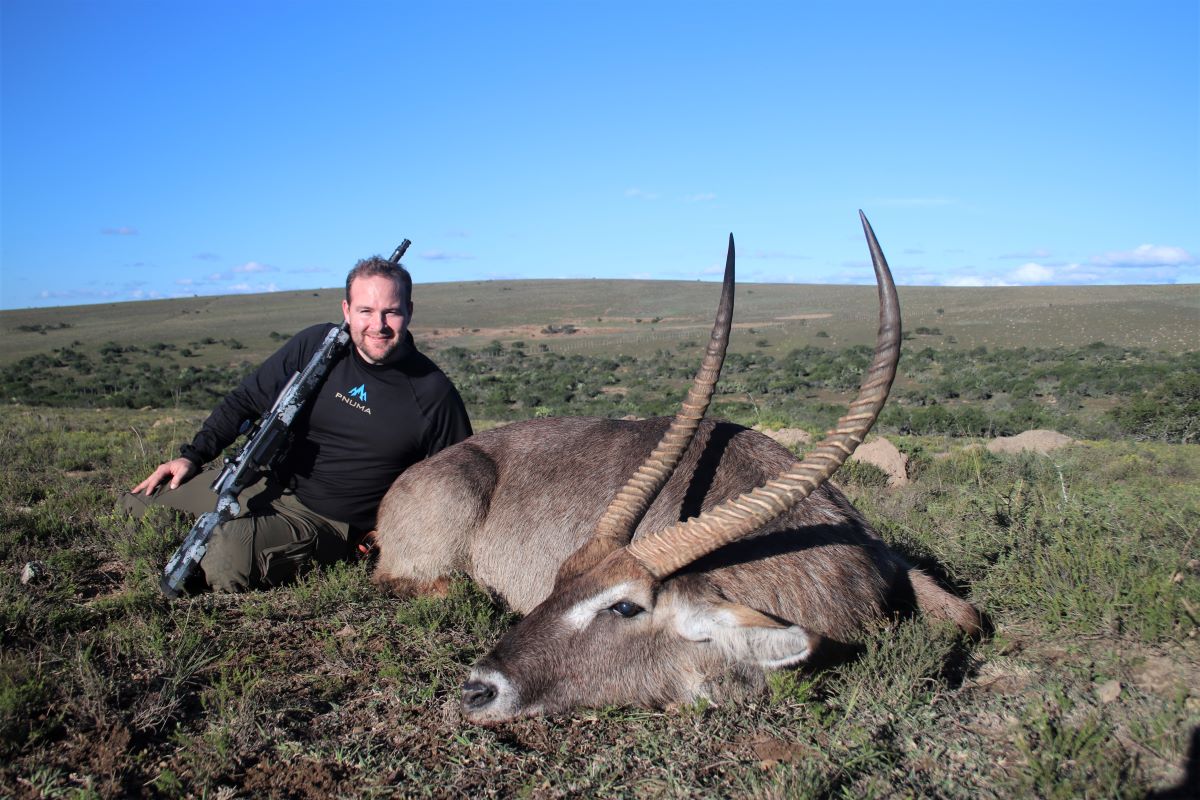 Scott Brousard who was out on his first African safari had teamed up with Professional Hunter, Louwrence Lombard, hoping to pursue East Cape Kudu, Gemsbuck , Impala and whatever Africa might give him. Neither he or the rest of the team could have envisaged what Africa would give him on his very first morning out, not to mention a Cape Bushbuck in the rain. Talk about some serious luck. 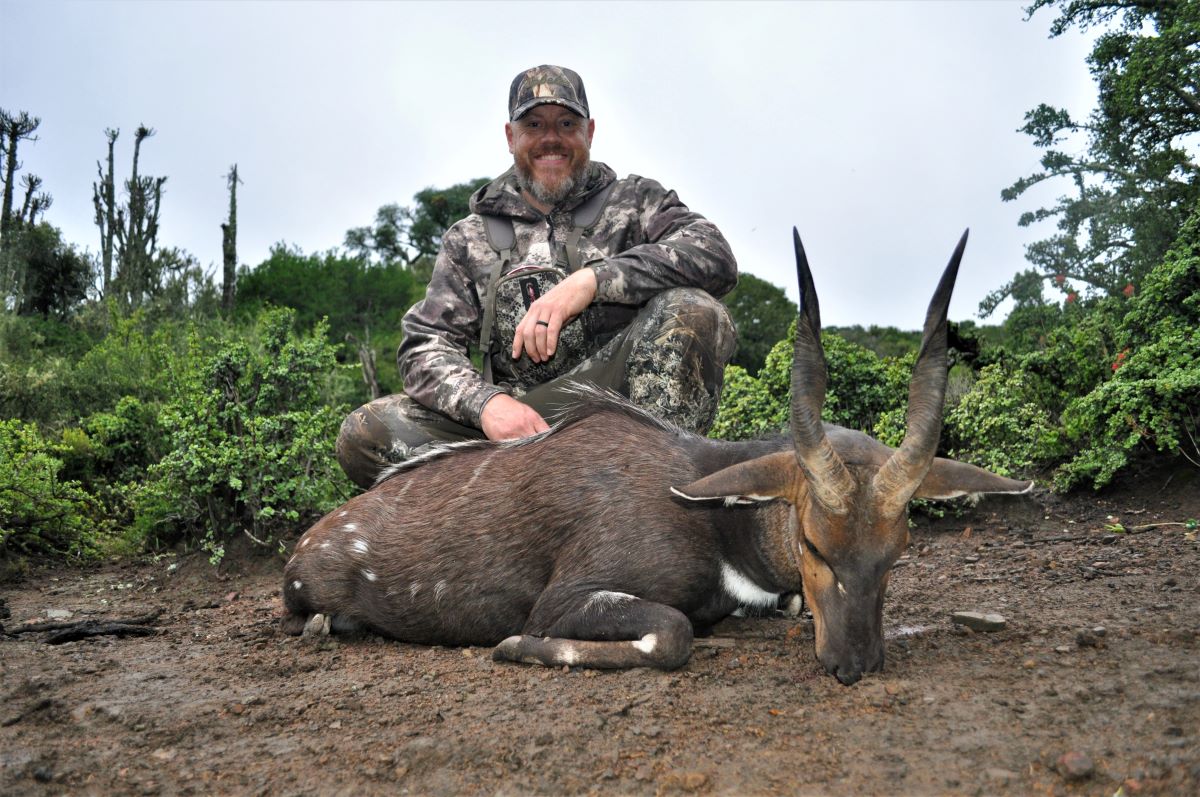 A fun day up in the mountains for Gemsbuck and the ongoing search for East Cape Kudu saw him bag two beautiful bulls as well as an Impala towards the end of his safari. 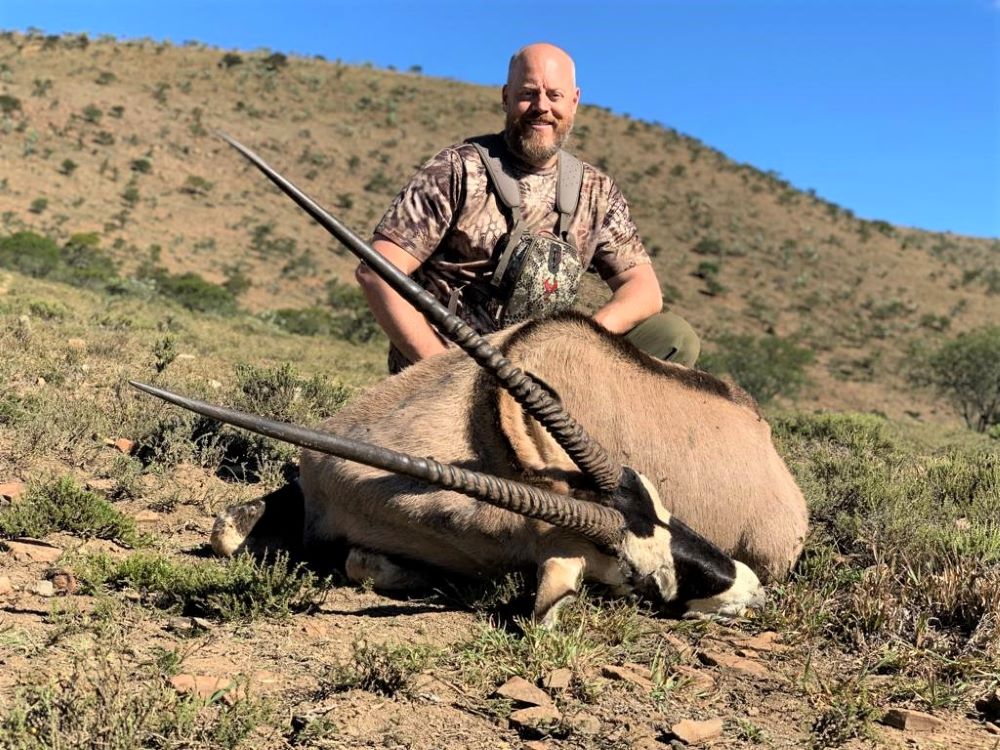 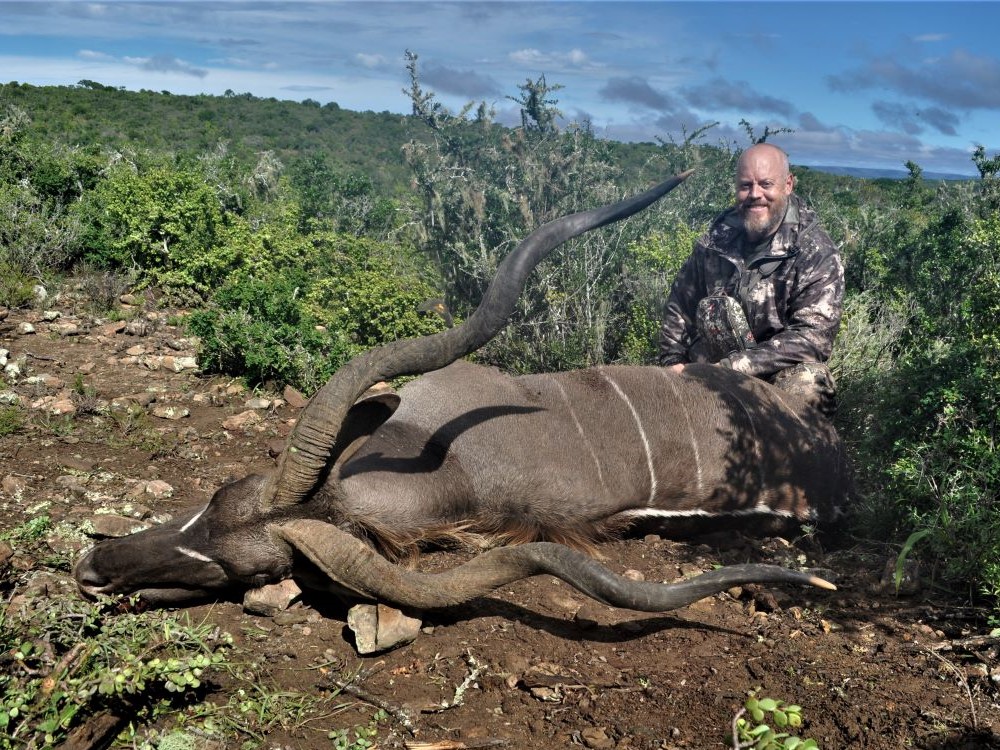 With the teams hard at it in the south, Professional Hunter, Ed Wilson and Kelly Maloy were making the most of the good weather after the initial cold front had passed. A big Kudu was Kelly’s goal and main focus with further mountain species including Vaal Rhebuck and Mountain Reedbuck being of particular interest to Kelly. A huge Blesbuck presented an opportunity while out on the hunt one afternoon, which Kelly did not pass up. 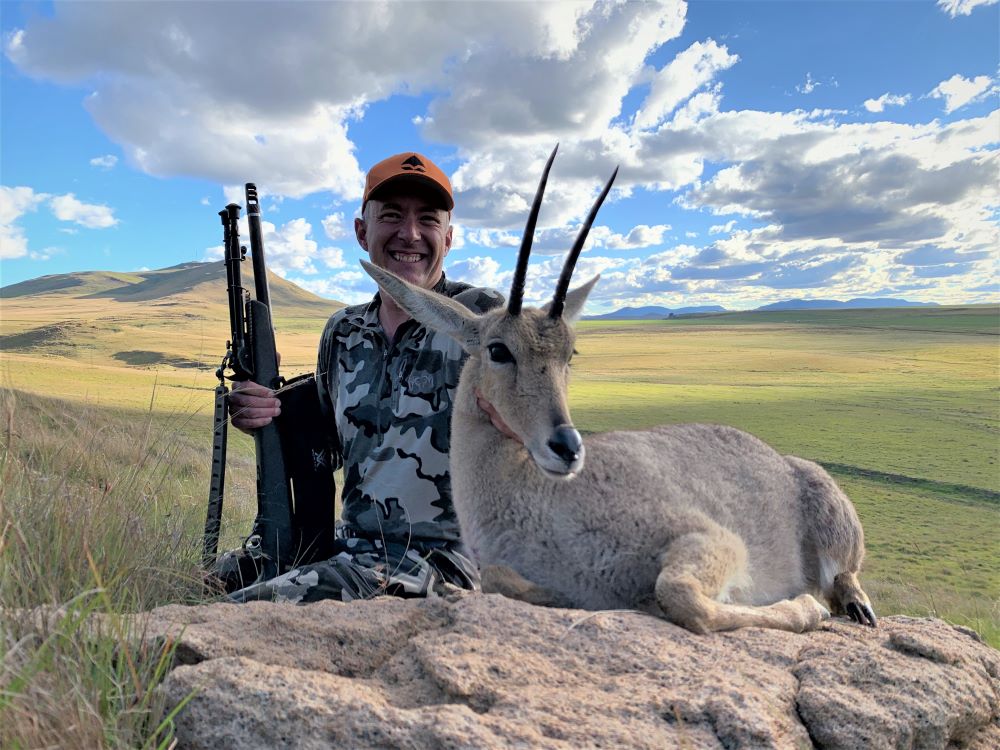 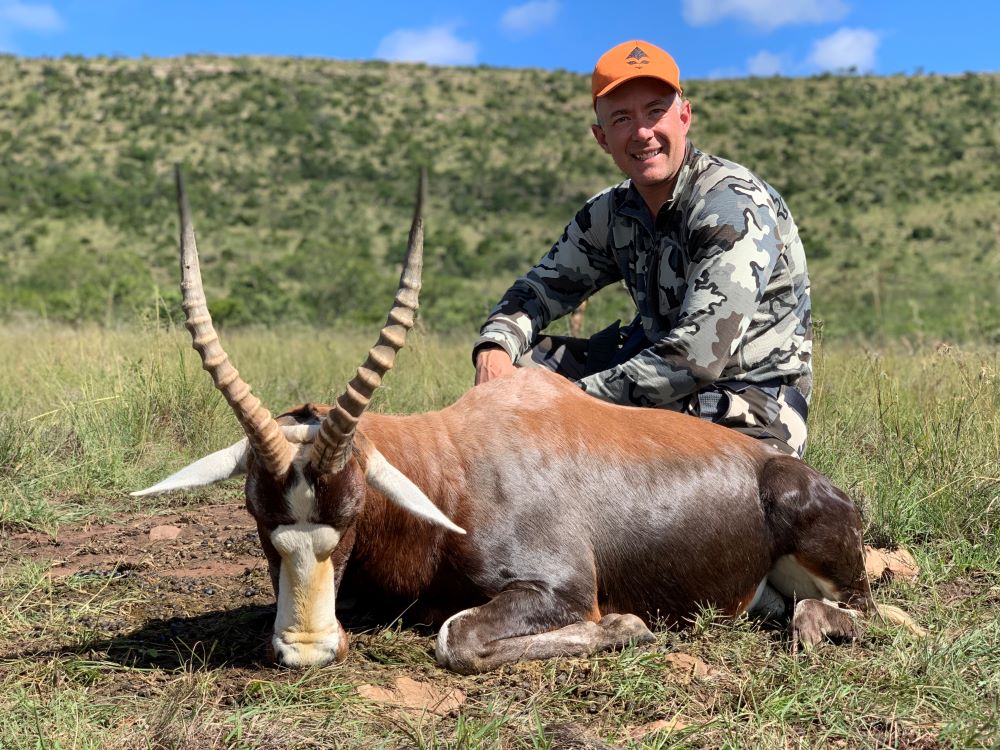 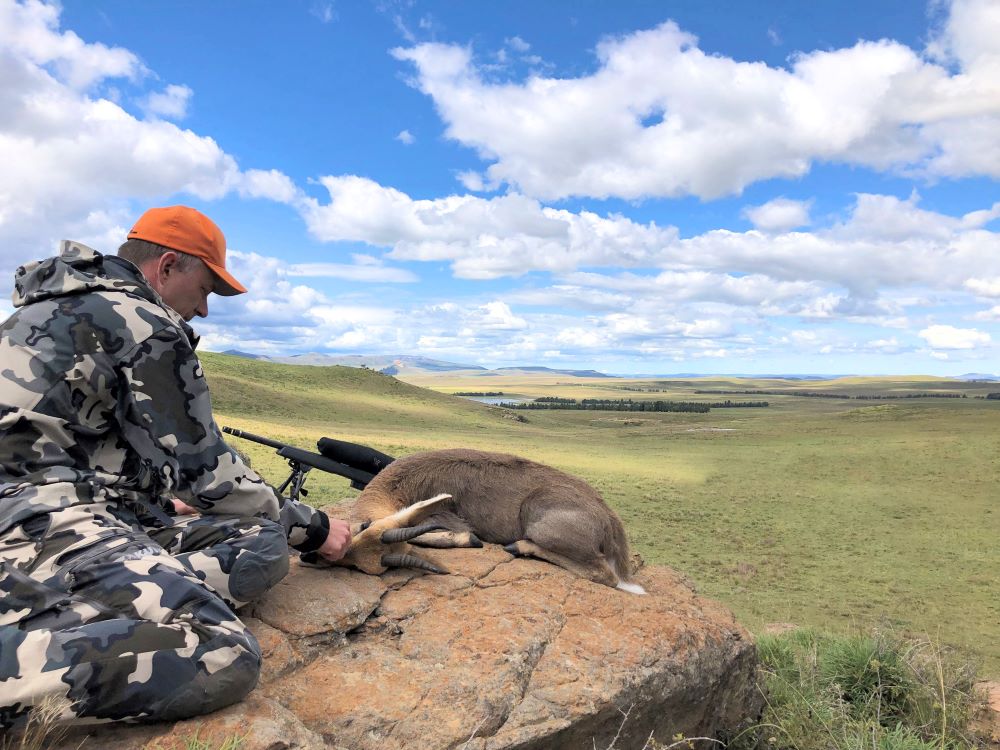 The Kudu was the main reason and focus why Kelly was back again this year after having passed on a number of bulls last year. Kudu are more often than not the priority of every safari, but Kelly had sat down with us expressing his interest and then channeled his focus on achieving that goal. It was a big ask, but we committed to giving it our best shot. At the end of the day it’s still hunting. On this occasion the hunting gods came smiling while Kelly made one of the better shots in a long time. 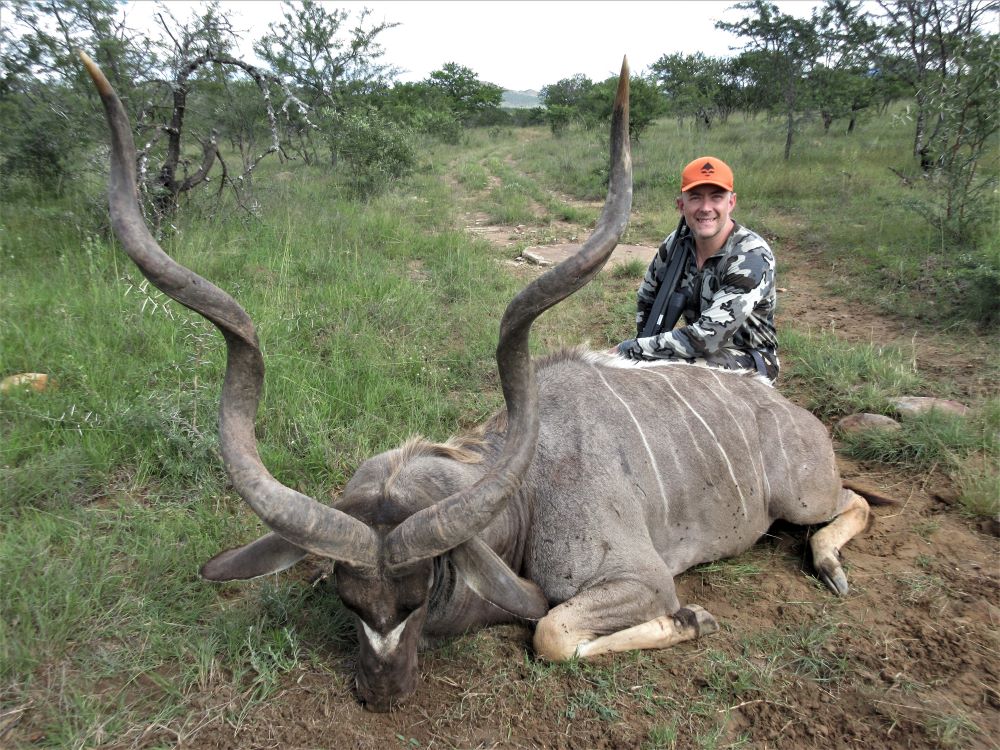 With two fantastic Cape Buffalo and a host of impressive Plains Game Species having hit the salt by the end of April we could not have hoped for better results after the start we enjoyed. The rut has barely hit and there’s so much our hunters can look forward to in the coming months.